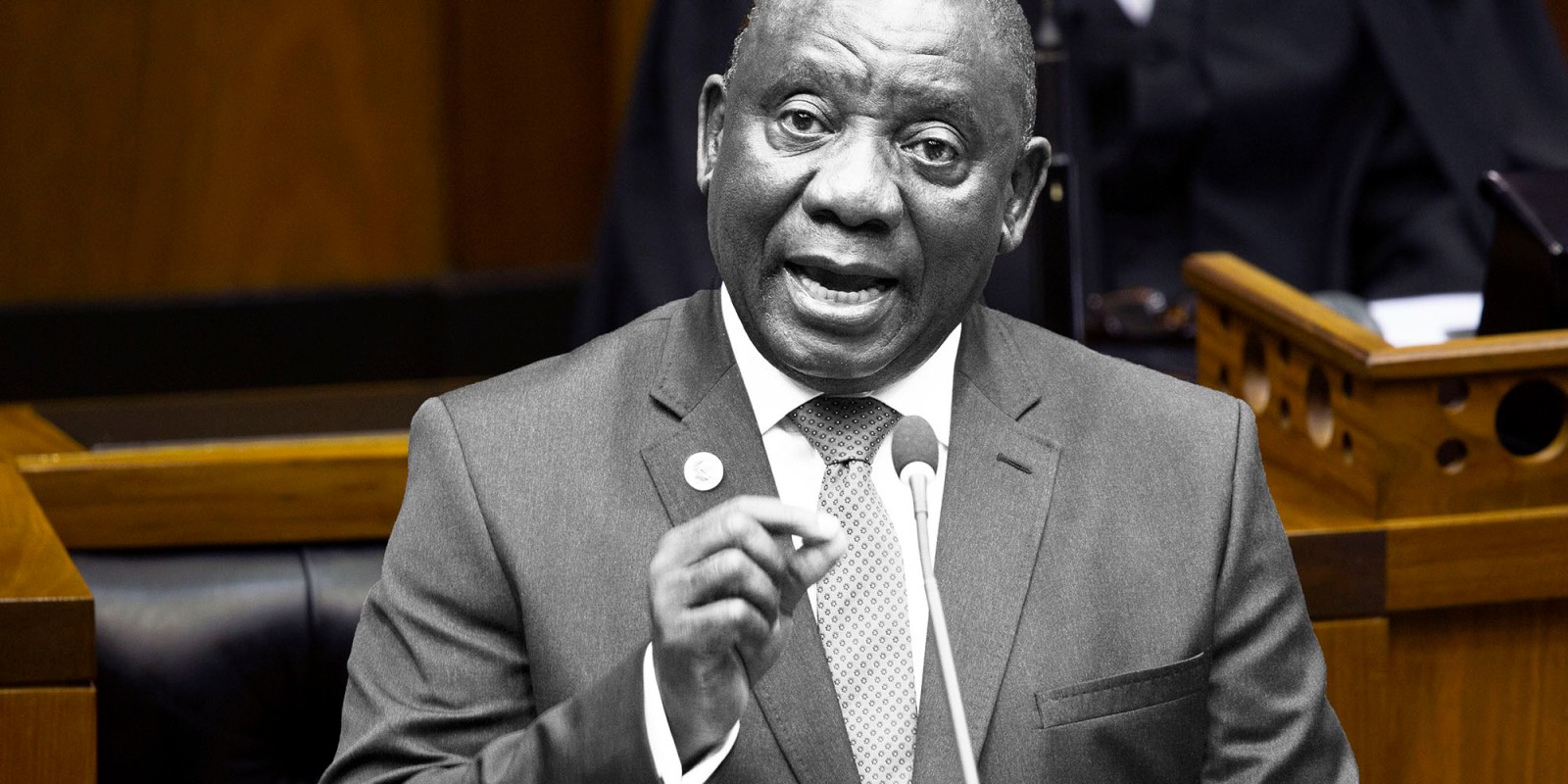 President Cyril Ramaphosa’s ‘emergency action plan’ to end gender-based violence had little new or imaginative to rid South Africa of this blight. Wednesday’s joint sitting was a PR play by the president to regain control of the optics in a difficult moment for the whole nation — and Parliament provided the platform.

From the podium of the House came a presidential rehash that the state should oppose bail for rape accused and that a life jail term following a conviction for the rape or murder of a woman or child should be that — life, not parole after 25 years. It’s been said before, as has been the opening of new sexual offences courts.

A red herring was talk of finalising new legislation such as the Victim Support Services Bill “to strengthen support for gender-based violence programmes and services”. Such a draft law is nowhere near Parliament. And the legislative pipeline from ministry to Cabinet approval, then departmental public hearings to another Cabinet approval before tabling in Parliament for its own legislative processes is extensive. It takes time; often several years.

But as President Cyril Ramaphosa walked the few metres from Wednesday’s Cabinet meeting to Parliament, he seemed to want to bring an immediacy to the joint sitting. Cabinet had earlier resolved to direct R1.1-billion to a “comprehensive response to gender-based violence”, he said, before making the key qualification: the money is not new money, it is from “within current Budget allocation”.

That means departments will have to make cuts to find the money — effectively something else must give, hopefully, waistline items such as catering.

The presidential announcement on increasing the numbers of Thuthuzela Care Centres from 54 to 100 by 2025, massages existing measures to sound new. Effectively it’s seven such centres every year for the next six years. But that is already in progress, since the previous financial year.

The National Prosecuting Authority (NPA) 2018/19 annual report for the financial year ending 31 March 2019 already states five new Thuthuzela Care Centres are in the making — seven sites have been identified — as is upgrading of existing sites. That has been made possible by the allocation of R16-million from the Criminal Assets Recovery Account.

Coincidentally, there seems to be a disagreement on how many Thuthuzela Care Centres there are in South Africa: the Presidency says 54, the NPA annual report says 55.

And while Ramaphosa, in closing the two-and-a-half-hour joint sitting debate, announced plans to establish a forensic laboratory in the Eastern Cape — the province sends DNA and other samples to Cape Town or Durban — the SAPS does not seem to quite play along.

The turn-around target for analysing DNA samples is 63 working days, or three months, according to the SAPS 2017/18 annual report, the latest available. That turn-around time has remained steady since 2014 — and has never been fully achieved. DNA samples would not only relate to sexual offences or murders of women and children, but all crimes.

The SAPS allow 15 calendar days for the processing of fingerprint searches and maintenance of criminal records. Effectively that means the police give themselves half a month to trace previous convictions of suspects or arrested persons. And even then they don’t hit their target: in the 2017/18 financial year, the SAPS managed to check 1,185,210 fingerprints from 1,210,422 within that 15-calendar-day timeframe.

Ramaphosa told lawmakers at Wednesday’s joint sitting: “Abusers, rapists and murderers must know that they will be caught and that they will face the consequences of their actions”. But the reality is few are actually caught and brought to court with prosecutable dockets.

So the proposed engagement with the judiciary on the role it can play in, as Ramaphosa put it, “supporting the national effort to end gender-based violence” is largely moot.

That’s the reality which underlies — and contradicts — Ramaphosa’s well-crafted words of promise and commitment, hitting all the Thuma Mina notes of working together, hope and turning challenges into opportunities.

Wednesday’s joint sitting was an unusual move, with the only previous such occasion being the June 2005 address by then-president Thabo Mbeki to inform Parliament he had relieved Jacob Zuma of his duties as South Africa’s deputy president in the wake of corruption allegations.

But Wednesday’s sitting was a tight display from the president’s side.

Ramaphosa appropriated the “war on women” expression used by #AmINext. Protest marches galvanised, also to Parliament, amid the public anger as over a few days news emerged of the rape and killing of student Uyinene Mrwetyana by a post office worker, the killing of boxing champ Leighandre “Baby Lee” Jegels by her policeman ex-boyfriend, the discovery of the body of 14-year-old Janika Mallo, who had gone missing in Heinz Park on Saturday, buried in a backyard, and the killing of student and church youth leader Jesse Hess.

Ramaphosa talked of shadows and siege.

“There is a dark and heavy shadow across our land. The women and children of this country are under siege. There is a very violent and brutal war underway against the women of South Africa.”

But, crucially, he did not mince his words over the need for prevention activists in communities, and awareness both though schools curriculum and media campaigns to ensure early intervention. Boys and young men, said Ramaphosa, were “daily exposed to patriarchal attitudes and practices, and are often encouraged to prove their masculinity through domination and violence”.

It has taken two weeks for the president to be in the spotlight without disruption. His governing ANC did not cover itself in glory in the Women’s Day debate on 3 September, a day after details emerged of the Mrwetyana rape and murder in court. Condolences were offered, but it was also a case of speaker after speaker outlining government delivery. After the debate, the ANC objected to an EFF motion of condolences for Mallo’s killing.

There was the off-script and unprecedentedly blunt rephrasing of the rather passive “violence against women” into “men killing women” — and a call for men to rise to the challenge to stop the killing of women — Ramaphosa made on 4 September at a BrandSA breakfast on the sidelines of the World Economic Forum on Africa.

There was an unprecedented, but messy acceptance of a memorandum by #AmINext protesters at Parliament on 5 September — a day earlier some of his ministers released from Cabinet unsuccessfully tried to address protesters.

And then there was a messy pre-recorded address to the nation, bucking the age-old political tradition that such important speeches are delivered live.

On Wednesday, having called the joint sitting of Parliament, Ramaphosa was firmly on the floor, and took centre stage.

The only other ANC speakers were Justice Minister Ronald Lamola and National Council of Provinces (NCOP) Deputy Chairperson Sylvia Lucas. Minister of Women Maite Nkoana-Mashabane was left to field questions in the House into Wednesday evening. She repeated the key points of the president’s messaging — more money, legislative changes, more focus, while also bemoaning the loss of family cohesiveness.

But the governing ANC faces troubles: on the same day Ramaphosa made his pledges, it emerged the sexual harassment charges against former Western Cape ANC chairperson Marius Fransman had been withdrawn by mutual agreement.

EFF MP Victoria Mente hit a nerve when after a hard-hitting speech which put “vagina” firmly in the House — “It’s our vaginas, we can do what we want” — she called on all men in the House “to confirm they have never laid a hand on a woman”.

In the ANC benches sits Mervyn Dirks, who in late November 2017 was ordered out of the House for raising his middle finger when it was pointed out he had threatened a woman fellow MP. He was reported, but it remains unclear whether he faced disciplinary proceedings. The ANC returned him to Parliament after the May 2019 elections.

The bottom line? Much of what Ramaphosa spoke about is a repackaged presentation of what arises from the gender-based violence summit of November 2018, whose declaration was officially launched five months late at the 28 March 2019 presidential opening of a new sexual offences court in Booysen.

By the time Parliament hosted the Women’s Parliament in August, the contemplated council on gender-based violence and femicide was yet to be established, and a steering committee was still in acting capacity.

On Wednesday, it emerged that was still the case, with an acknowledgement that structures presently in place, including the women’s ministry, were not working optimally.

Or as IPF MP Liezl van der Merwe had earlier pointed out:

“(T)he disjunction between what our women endure, and what our government does in response, has been alarmingly inadequate. We were promised a National Council Against Gender-Based Violence in 2012. It didn’t happen. Year after year, during the State of the Nation Address, we are promised interventions to fight gender-based violence, most of which have come to naught.”

The gender-based violence summit decisions such as the council have yet to be implemented, 10 months later. And so an interim steering committee co-chaired by government and civil society, located in the presidency, will now drive the push to end gender-based violence.

In closing Wednesday’s joint sitting debate, Ramaphosa acknowledged the reason for a focused six-month emergency action plan was interim. “The broader strategic plan is still being worked on. We thought we should not wait…” DM