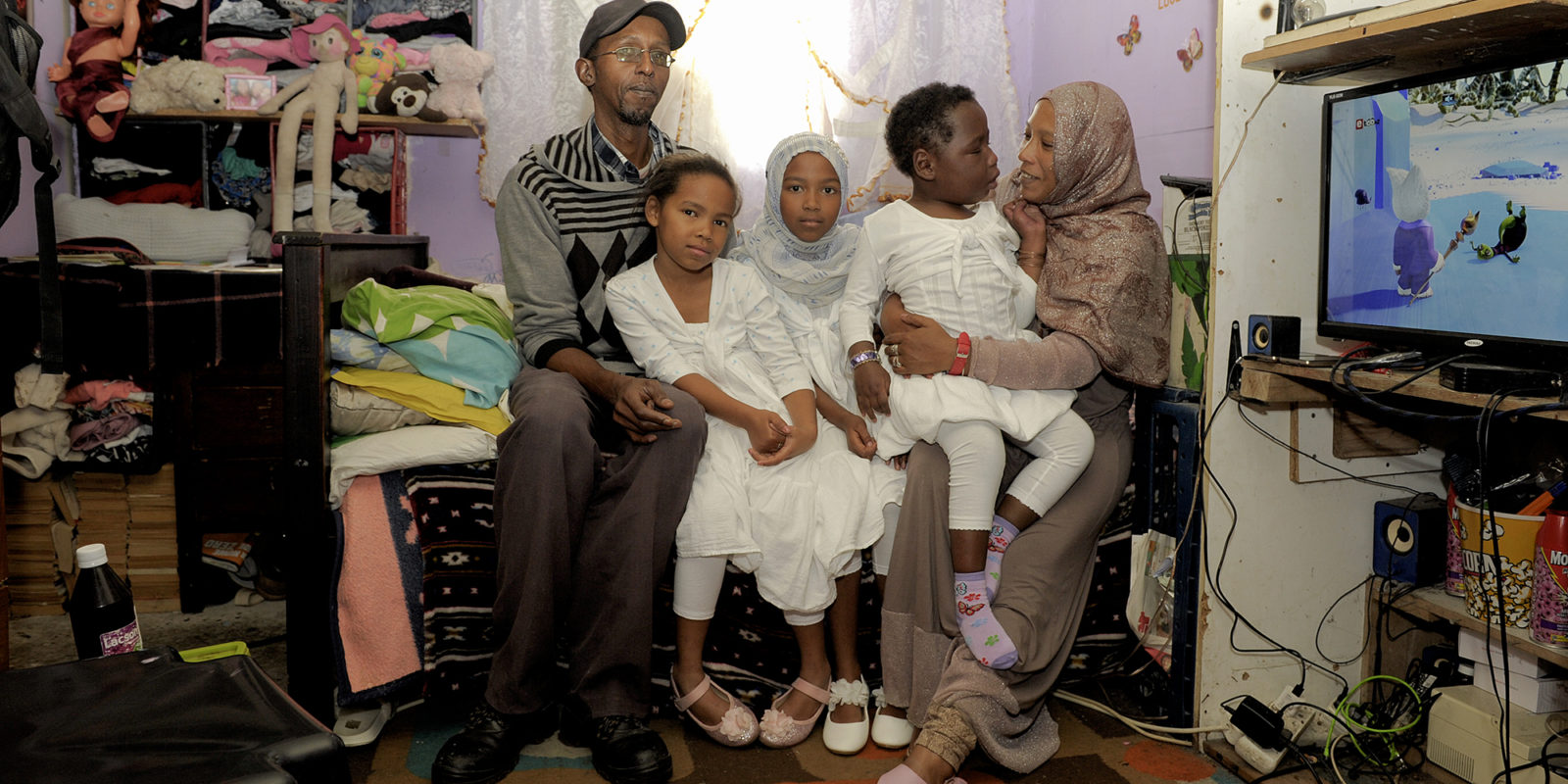 Nashrullah and Tasheeq Jansen with their three daughters in Belhar, Cape Town. Their youngest daughter, Jehaan, 5, has various debilitating conditions, including Sturge Weber Syndrome and is one of Paedspal’s outpatients. Paedspal is a paediatric palliative care NGO founded in 2015. (Photo: Joyrene Kramer)

On a leafy street in Rondebosch, Cape Town, a new palliative care facility for children is taking shape.

This is part of a four-part series on palliative care for children in South Africa. See other articles in the series here: Children’s hospice an oasis for those in need and Face to face with Joan Marsten.

The seven-bedroom, five-bathroom double-storey property will soon be demolished and rebuilt to municipal specifications. Upon completion, it will offer a first of its kind service in Cape Town: a hospice house with eight beds for sick or dying children, and additional rooms for their families.

The project is spearheaded by Paedspal – Michelle’s paediatric palliative care NGO founded in 2015 – and is funded by the Rohan Bloom Foundation set up by Rodney Bloom, the father of young Rohan who succumbed to cancer in 2016.’

During 14-year-old Rohan’s final days, Michelle supported the Bloom family at the Red Cross Children’s Hospital in Cape Town and two private hospitals in the city. Rodney recalls the trauma.

“In Rohan’s final days we would sleep on couches outside the ward. There just weren’t facilities for the parents.”

Now, Rodney wants his son’s legacy to live on through this gift to other families suffering similar heartache.

Situated 1.5 kilometres from the Red Cross Children’s Hospital, Rohan House will offer specialist round the clock palliative care to children, with accommodation for their parents. There will be counselling spaces and therapy rooms – aromatherapy and art therapy – and playrooms. And a garden for patients and their families to relax outside.

Michelle adds that the facility will offer “respite care” too.

“This means parents who are absolutely exhausted will be able to bring over their chronically ill children, while they take a break,” she says. “Knowing that their kids are properly looked after.”

One set of parents who will benefit from Rohan House are Nashrullah and Tasheeq Jansen, who live in a wendy house with their three young daughters in Belhar, on the Cape Flats. Their youngest daughter, Jehaan, 5, has various debilitating conditions, including Sturge Weber Syndrome. Jehaan is one of Paedspal’s outpatients.

Both Nashrullah and Tasheeq are unemployed, as looking after Jehaan is a full-time job. They are often at their wit’s end, and don’t know what they would have done was it not for palliative care and access to medication provided by Paedspal.

“Jehaan needs a lot of attention from all of us,” says Nashrullah. Inside their home, she is seated on the bed which the family of five shares at night.

“When Jehaan is in pain, nobody sleeps. There are days when you can’t touch her, you can’t clean her, you can’t pick her up,” she says. Nashrullah goes on to show us Jehaan’s medication; it fills a small bucket.

“It’s one of the worst things,” adds Tasheeq.

“I’ve had to take a lot of sick leave, to look after Jaheen, so I lost my job. I’m struggling to find work on Gumtree, it’s not easy.”

We make the trip to Belhar and back in Paedspal’s bright-painted bus, driven by Humbert Kordom.

Back at Paedspal’s rooms, based at the Rondebosch Medical Centre, children’s drawings line the walls. Many young patients are verbally impeded, so art therapist Angela Rackstraw help them communicate through drawings. One young cancer patient’s drawing of a boy reflects his anger.

“I will kick you in the face,” reads the speech bubble. “I am sad. I love him,” reads another drawing.

Inside Michelle’s office, we are discussing the state of paediatric palliative care in South Africa. From 2016 to 2019, she served on the Department of Health’s Palliative Care Policy Task Team, which finalised a national policy in April 2017. However, it was never implemented.

“It seems the plan is not being implemented because of financial constraints,” she says. “A budget was created but not approved.”

A major challenge is that the Department of Health is continuously restructuring.

“There are just so many competing priorities,” says Michelle. “And only a finite amount of budget. Basically, you’ve got to take something from Peter to give to Paul, you know.”

Then, there is the added challenge of unsynchronised provinces.

“We might try to synchronise things nationally,” says Michelle. “But the provinces have their own autonomy when it comes to resources. So it all depends on access to medication in a given province; their resources, how their provincial budget and spending is going.”

“I had a patient last year, a four-year-old boy, with a type of cancer called neuroblastoma,” says Michelle.

“After initial treatment, the cancer came back, growing in the confined space between his spine and stomach, causing unbearable pain. His mother was a police officer. A strong woman who had seen a lot, but she was struggling. After several weeks, using every available drug I managed to get the pain under control, and he died a peaceful death.

“A colleague in Durban asked for advice on managing a similar case. She didn’t have access to half the drugs I had at the Red Cross Children’s Hospital. The child died in excruciating pain. The difference between my patient’s relatively good death and the nightmare one of the Durban child is access to proper pain relief within an effective public health care system.”

In 2012, Michelle stepped down as chief executive officer at Big Shoes, in order to focus on clinical work. “I was sick and tired of fundraising at that point,” she recalls.

“I just wanted to go back to practising and being more of a doctor than a fundraiser.” Sadly, the man who replaced her would go on to defraud the organisation of R80 000.

“Around about the middle of 2012, my Joburg bookkeeper came to me with some stuff, irregularities,” says Michelle.

“We were very fortunate that Judge Edwin Cameron was a patron of Big Shoes. He helped us with legal advice and we eventually got the money back.”

But the scandal rattled funders, locally and abroad.

“We were very transparent about it all,” says Michelle. “The saddest thing at that point was that we were up for an international award from the Stars Foundation. They give awards to NGOs in Africa and in Asia. We were one of four finalists in the competition, actually we were pretty sure to win. The prize was going to be a million pounds. Well, on the eve of the Stars Foundation people coming to Johannesburg to visit us, news of the fraud was in the news. They couldn’t let us win. Our reputation was damaged. Our biggest funders started doubting us, starting to pull out their funds.”

Soon after, Big Shoes was forced t0 shut. At the time, this was described as “devastating”, “tragic” and “a disaster” in the field.

Fortunately, organisations would rise from the ashes of Big Shoes. In Cape Town, Paedspal. In Durban, Umduduzi. In Johannesburg, Thusanani and Wits Palliative Care at Baragwanath Hospital continues the essential work today. DM

Spotlight is an online and print publication produced by SECTION27 and the Treatment Action Campaign.