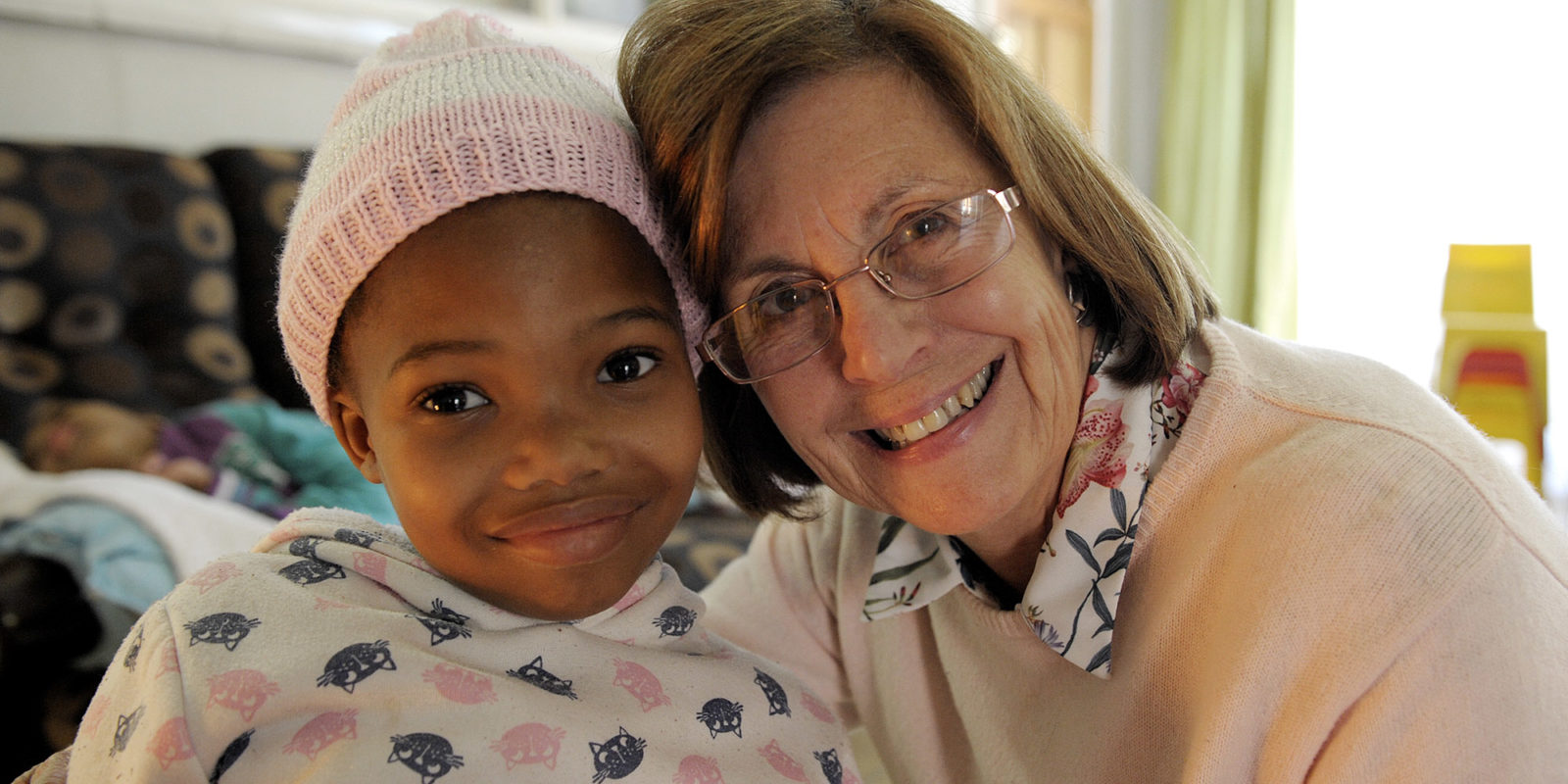 Joan Marston, founder of the Sunflower Children's Hospice with one of the children in her care. (Photo: Joyrene Kramer)

From a children’s hospice in Bloemfontein to leading an international network, Joan Marston has made a major contribution to palliative care for children.

Joan Marston swoops Jose into her arms. “Hello beautiful boy,” she says, kissing the toddler’s forehead as he croons with delight. Jose is two years old and has trisomy 13, a rare condition caused by an extra copy of chromosome 13. He is one of 15 young patients at the Sunflower Children’s Hospice, based in a house wrapped in trees and shrubs next to Bloemfontein’s National District Hospital. Here children are cared for until they are well enough to return home, or to a foster family; or until they pass away.

When Joan founded the children’s hospice in 1998, it was a first of its kind in South Africa. This was at the height of the HIV/Aids pandemic, with babies orphaned and dying around the country – with years of state-sponsored Aids-denialism still to follow under the presidency of Thabo Mbeki.

Inside the hospice house, Joan leads us to a small sitting room for the interview. She cuts a tiny silhouette, dressed in a light pink jersey over a floral shirt. But her petite frame belies a powerhouse legacy. At 72, Joan’s career in paediatric palliative care packs a punch in South Africa and abroad. Her pioneering work has touched young lives around the globe, in countries as far afield as Belarus, Russia, the Ukraine, India and Malawi.

Joan understands the pain of losing a child. Her first son died as a baby due to a brain anomaly. After that, Joan and her husband, Richard, had another son and a daughter. “Having my own two children who are lovely and healthy may have played a part in my passion to help others less fortunate,” she says. “The other part simply is I’ve always had a specific connection to children. Also, it was really just seeing all those kids suddenly referred to me, and they were dying.”

Joan remembers the moment that prompted her to start the hospice for children. She was cradling Refilwe in her arms, a baby who would die the next day. “I will never forget that moment,” she says. “I can remember her eyes, looking up at the trees and the leaves. We had so many Aids babies at the time. Back then, what did we know about paediatric palliative care? We were learning from the children really. They guided us in what we know today.”

Joan grew up in Durban, where she completed a nursing degree at the University of KwaZulu-Natal. Years later, Dr Zweli Mkhize, the province’s health MEC from 1994 to 2004, would leave a favourable impression on her. Dr Mkhize is South Africa’s newly appointed health minister.

“Yes I’m very positive about our new minister,” she says. “As health MEC in KZN, he was very supportive of what we were doing and palliative care for children.”

In 2005 she was the co-founder and first chair of the International Children’s Palliative Care Network (ICPCN) at a conference in Seoul, South Korea. In 2011, she became chief executive of the network, which was headquartered with her in Bloemfontein.

“So when I was chief executive of the ICPCN, I was travelling between two and three weeks a month,” she recalls.

“I ran big projects in India and Malawi. There was — no there is — this fantastic programme in Blantyre, in Malawi, and then one in Mumbai; I was overseeing the development in both countries. I’ve also helped in Georgia. They wanted to start paediatric palliative care in Tbilisi and asked me to do some training for them and I’ve been back a few times to help since. They’ve developed a lovely children’s hospice up there.”

Paediatric palliative care often is an unmet need in low-income countries. “Children can’t advocate for themselves, you know,” says Joan. “And people don’t like thinking about children dying so if nobody is reminding them it gets pushed down the agenda.”

Joan stepped down as the ICPCN’s chief executive in 2016, leaving behind a worldwide system of programmes, care units and research, underpinned by her mantra: “Don’t forget the children.” Today the ICPCN has 120 member countries.

Despite her retirement, she is not slowing down. In September, she will address a conference in the Ukrainian capital of Kyiv, focusing on palliative care for children in the aftermath of the 1986 Chernobyl disaster.

“So in South Africa, our tragedy has been HIV,” says Joan. “Similarly, in Russia, Belarus and Ukraine they’ve been dealing with cancers because of the fallout from Chernobyl. So five years ago this foundation in Kyiv contacted me and asked if I would speak to their government about palliative care for children, and I’ve been going since.”

Like South Africa, Ukraine has budgetary constraints. “It’s a very poor country and it has this ongoing war with Russia on its borders, you know. If you look at the history of Ukraine, apart from the corruption they really have had tragedy after tragedy. They are lovely people, though. I love my Ukrainian friends, they are accomplishing great things with such limited resources.”

“They have a new president now, so hopefully he will be good for the country. He’s a comedian, so yes, it’s going to be interesting going back,” she says, laughing.

Joan will be joined in Kyiv by Anna Garchakova, founder of the Belarusian Children’s Hospice. The two have collaborated over the years, and in a warm tone, Joan describes Anna as a friend.

“Anna really is a wonderful lady,” she says. “So the Belarusian government flew Anna to Washington to learn the latest about palliative care for children, so she could apply that given their problems after Chernobyl. And she runs what I think is one of the best children’s hospices in the world — and I’ve travelled a lot.

“One thing we have learned is that principles of palliative care for children are the same the world over. It doesn’t matter whether you’re in the United States, Belarus or in South Africa.”

Joan and Richard moved to Bloemfontein 40 years ago, and are happy in the Free State city. “We moved here for Richard’s work,” says Joan. “It’s what you call a ‘big dorp’ you know, you get to know the people. So it’s where we have our friends, and as you get older that’s really important. Bloemfontein is a good base.”

The Sunflower Hospice has become somewhat of a family endeavour. “Richard is very supportive, he’s just amazing. I mean he collects the donated food from Woolworths for the hospice. He is an accountant and does the finances of the hospice too,” she says.

“Like on Saturday, I had to see a patient way out of town, 30 kilometres out, and I wasn’t sure where to go and he came with me, you know, he’s very good. I couldn’t do this without that support.”

Palliative care is a right

In essence, Joan believes every child has the right to have palliative care. And that budgetary constraints are not an excuse for governments not to provide these services.

She adds that she remembers every child that she has ever cared for — and that each “leaves a footprint in her heart”. A big heart indeed, with many, many little footprints. “You don’t forget them, you really don’t,” she says. DM