Eskom’s extra R59bn: SA running out of money as the SOE paralysis continues 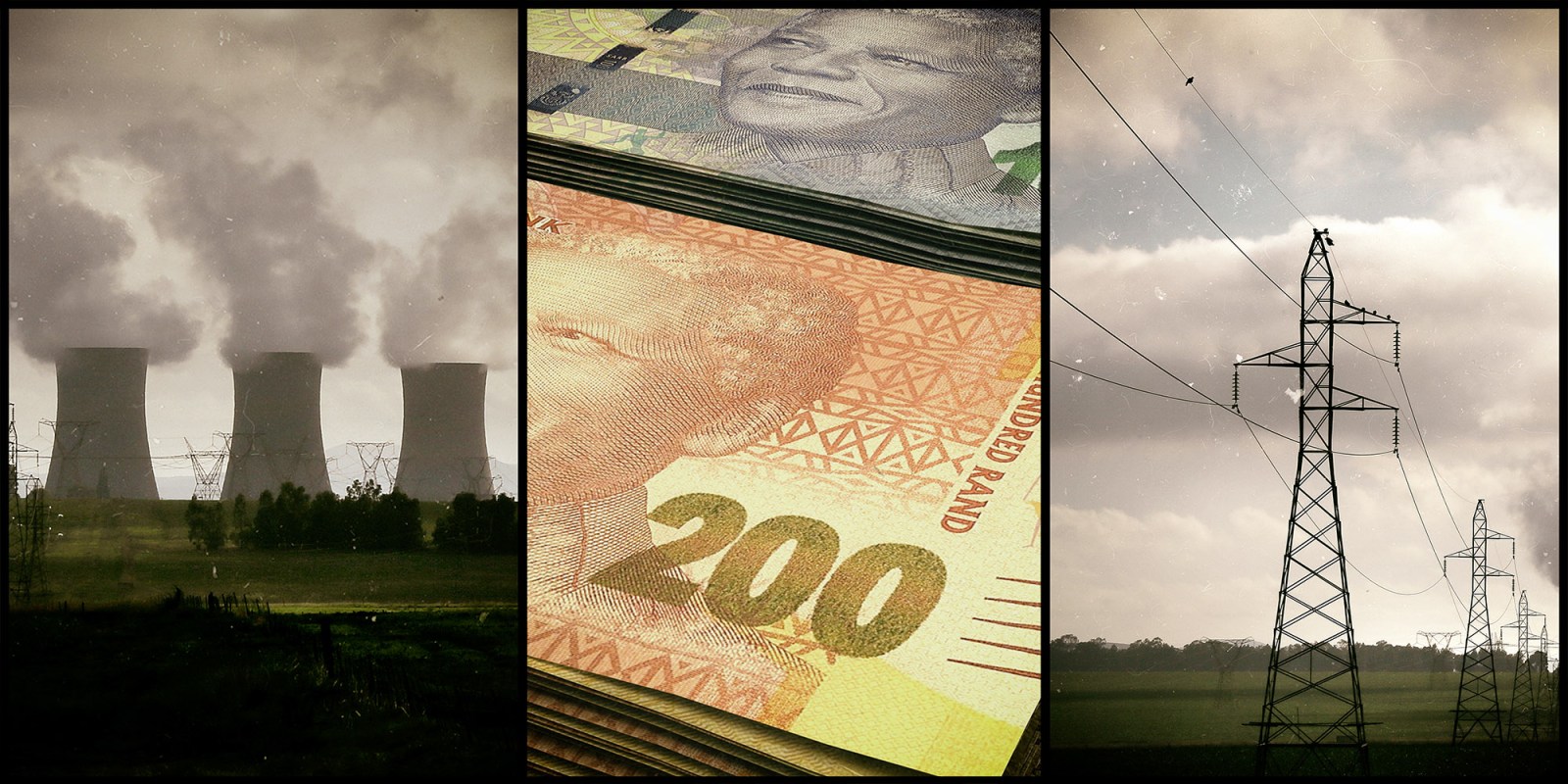 Eskom — the state-owned entity at the heart of State Capture — appears to have triggered a paralysis amid politicking and politics around its future, says the writer. (Photos: EPA / Kim Ludbrook / AdobeStock)

When Finance Minister Tito Mboweni on Tuesday told MPs government would have to review its funding requirements, he put into financial jargon that, actually, South Africa’s running out of money. And Eskom is to blame, in the main.

Bluntly put, Tuesday’s Special Appropriation Bill is scraping together R59-billion extra for Eskom — that’s in addition to the R23-billion a year already announced in February’s Budget — to ensure the power utility keeps its lights on.

The bailout timing is crucial — a week to the day before Eskom releases its financial results. Twice delayed already, it’s now on public record the power utility wasn’t a going concern; effectively bankrupt, it can’t meet its obligations under its own steam. The Special Appropriation Bill’s proposed R59-billion bailout over two years has ensured the auditors, on the back of such an official guarantee, can now sign off on the Eskom financials.

“Eskom’s funding plan is dependent on raising additional funds from the markets, which requires them to be a going concern. This extra funding addresses going-concern status,” said Finance Minister Tito Mboweni, adding later: “Without our support, the company (Eskom) will be unable to meet its financial obligations.”

If Eskom fails to meet its obligations, including servicing its R450-billion debt of which R350-billion is government guaranteed, it triggers the immediate repayment, and could also lead to a cross-call-in of the debt of other state-owned entities such as SAA, the South African National Roads Agency (Sanral) and Denel. It came very close to that at the end of March 2019 when Mboweni had to invoke the emergency provisions of the Public Finance Management Act to ensure the power utility had the cash to meet its obligations.

“Eskom presents the biggest risk to the financial fiscal framework because of its financial difficulties and its negative impact on the lives of ordinary South Africans,” said Mboweni on Tuesday in his statement to the House on the Special Appropriation Bill.

“Given the high risks of a systemic failure if Eskom were to collapse, government is urgently working on stabilising the utility, while developing a broad strategy for its future.”

But this bailout in tough economic times marked by persistent low growth and stubbornly high unemployment, would mean government must go back to the drawing board as it’s financial planning outlined in February’s Budget is now bust. This signals tough news in October’s Medium-Term Budget Policy Statement.

“Fiscal support (to Eskom) will come at a significant cost to the fiscus and the South African taxpayers,” said Mboweni, adding that tax collection is anticipated to miss estimates.

“This could substantially increase the government borrowing requirements, which will require government to revise its funding strategy…”

Government is already stretching good sense on the borrowing front, creeping to that 60% debt to gross domestic product (GDP) ratio that is a widely noted, even if not exclusive, indicator of economic stability.

According to February’s Budget, South Africa is spending R243-billion more than what is available in the national coffers, and that meant debt interest repayments are the fastest-growing Budget item.

“Put another way, we are borrowing about R1.2-billion a day, assuming that we don’t borrow money on the weekend. This coming year, interest expenditure will be R209.4-billion. This is R1-billion a day,” said Mboweni, delivering his maiden Budget speech on 20 February 2019.

On Tuesday, it was a short and sober speech that Mboweni delivered in introducing the Special Appropriation Bill in the House. And while he rammed home the need to restructure Eskom to get it on a sustainable footing, he stopped short of delivering the blunt statement of his prepared speech:

“The frequency of the power shortages has risen in recent years, and government needs to act boldly and decisively. We are therefore committed to a significant reform agenda for the entity”.

“Debt-to-GDP levels are at unacceptable levels providing for a serious crisis in the country.”

Whether anyone listens to Mboweni remains to be seen. Without tough political decisions, the Eskom poser continues to hold South Africa to ransom. Yet those political interventions and tough decisions are missing in action despite the tough talk.

To date, nothing has come of Eskom’s unbundling into three entities — generation, distribution and transmission — as announced by President Cyril Ramaphosa in his February State of the Nation Address on 7 February 2019.

And while Mboweni followed up in his Budget on the Eskom restructuring — Annex W in the Budget Review talked of the first unbundled entity, transmissions, to be up and running by mid-2019 — nothing has yet come of that.

ANC alliance partner, labour federation Cosatu, has piled on the political pressure over potential retrenchments and job losses linked to Eskom’s unbundling. And Ramaphosa publicly undertook that there would be no job losses.

The independent power producer (IPP) sector also remains under pressure as the National Union of Metalworkers of South Africa (Numsa), but also the Cosatu-affiliated National Union of Mineworkers are opposed — again over job losses and retrenchments.

And now the sector has been shaken by what the DA called the “removal” of IPP Office head Karen Breytenbach with some nine months still to go on her contract. DA MP Kevin Mileham on Tuesday said he had written to Mineral Resources and Energy Minister Gwede Mantashe about this, given that under Breytenbach’s tenure some 112 projects were rolled out on the back of R209-million in investment.

“Breytenbach’s removal is indicative that Minister Mantashe and his team are not in favour of a Renewable Energy Independent Power Producer Procurement Programme (REIPPP) which alleviates fiscal pressure,” said Mileham in a statement on Tuesday.

But the politicking goes further — and seems to have put National Treasury and Public Enterprises at odds with each other, and also seemingly within their own ranks.

That the Special Appropriation Bill was not accompanied by an explanatory memorandum was widely expected — as Finance Director-General Dondo Mogajane confirmed in early July would be the case, and while Public Enterprises Minister Pravin Gordhan, in a media briefing ahead of his budget vote debate indicated there would be a White Paper, or government policy, at some stage.

The absence of the much-talked-about, but still not delivered, explanatory memorandum or White Paper has signalled behind-the-scenes disagreement, and tussle, in the backrooms of government. As could Mboweni’s statement that he had discussed with Gordhan the selection of Eskom’s chief reorganisation officer who “pending finalisation” could be announced later on Tuesday. By 6pm that hadn’t happened. And Mboweni’s statement in the House where Gordhan sat in the parliamentary benches, might just have been an effort to lead the public enterprises minister into a decision.

In many ways, Mboweni is on his own. Just as he walked to his parliamentary offices at 120 Plein Street around 9.30am on Tuesday, he stands solo in asking tough questions on the feasibility of keeping non-productive state-owned entities. It’s upset Cosatu and fellow ANC alliance partner, the South African Communist Party (SACP), which are calling for him to retire in line with his initial grumpiness over being called to Cabinet.

Even within the ANC, whose 2019 election manifesto promises require a hike in social spending from education to health, Mboweni knocks heads. ANC benches were taken aback when he said in his maiden Budget speech:

“Isn’t it about time the country asks the question: Do we still need these enterprises? If we do, can we manage them better? If we don’t need them, what should we do?”

Eskom — the state-owned entity at the heart of State Capture — appears to have triggered a paralysis amid politicking and politics around its future. But unless there is considered action, not just talk, South Africa remains standing at the brink. DM