Undercover with Mandela’s Spies: the living and the dead still bound by apartheid’s devastation 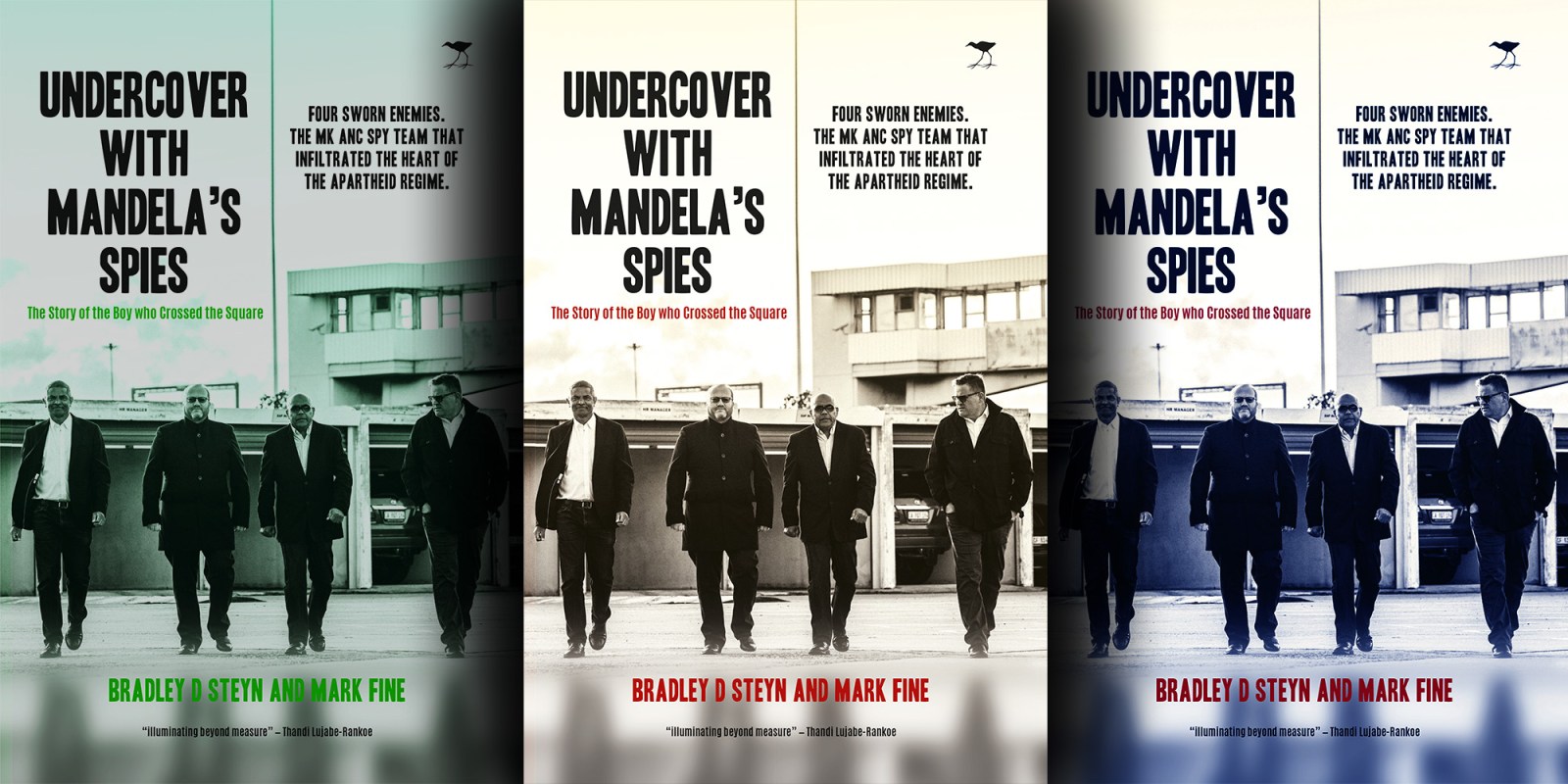 Bradley Steyn’s book Undercover with Mandela’s Spies is not just a rollicking read full of testosterone-driven skop, skiet and donner, treachery and treason, it is also about a young white man’s gradual attainment of wisdom, of understanding how psychologically, emotionally and spiritually corrosive the idea of unreconstructed whiteness is.

While a packed audience attended the Cape Town launch of Bradley Steyn’s recently published biography, Undercover with Mandela’s Spies – The Story of the Boy Who Crossed the Square, an account of how he went from apartheid Security Branch operative to spying for the ANC, the ghosts of those who suffered and died in apartheid violence moved among us.

Steyn was a 17-year-old schoolboy when he strolled across Strijdom Square towards the State Theatre in Pretoria one hot afternoon in November 1988. Fresh from rugby practice, the schoolboy carried a set of clean clothes in a tog bag for that night’s performance of the ballet Giselle,to be performed at the State Theatre, where his mother, Daphne, worked.

That year, 1988, was a torrid one of assassinations, murders, constant violence and bomb and limpet mine explosions in Kokstad, in a disco in Hillbrow, in central Johannesburg, in Cape Town in an office block only 100m from parliament, outside the Sterland cinema in Pretoria, to name only a few.

While the National Party was talking to ANC leaders both in exile and imprisoned in South Africa, behind the scenes, the war between the state and ANC Umkhonto weSizwe (MK) operatives escalated. Cross-border raids by apartheid forces in Zimbabwe and Botswana, targeted the ANC and its allies.

It was the year Trevor Manuel was detained for the third time while Nelson Mandela was moved from Pollsmoor Prison in Cape Town to Victor Verster Prison in Paarl. It was from here that he would in 1990 step through the gates, a free man.

But on 15 November, white supremacist Wit Wolf, Barend Strydom, then 23 years old and dressed in camouflage, chose to drive to Pretoria’s CBD, armed with a 9mm pistol with extra ammunition bulging in his pockets.

His mission was to kill any and every black person he encountered on the capital’s streets in the name of white and specifically Afrikaner supremacy. At the end of Strydom’s random shooting spree, eight victims lay dead, one of them cradled in Steyn’s arms, while 16 others were injured.

It is unfortunate that a superb foreword by veteran journalist Janet Smith and which formed part of an earlier draft of Steyn’s manuscript (co-written with author Mark Fine) did not make it to the final print.

Smith’s thoughts would have offered a crucial entry point into this complex, painful and layered story about the corrosive psychological and emotional impact of white supremacy and particularly toxic patriarchy in shaping events and history.

These not only led to the bloody massacre on Strijdom Square but deeply affected and shaped the lives of South Africans who lived under the apartheid regime.

Smith wrote: “If I was wary of supremacists – who didn’t hesitate to DM me with threats of slitting me open from top to bottom and rejoicing if I was gang-raped – I was cautious of Bradley at the get-go. I was affected by his experience as the boy who crossed the square, but I was immediately suspicious of everything else, especially the depth of his relationship with the ANC.”

She said that while she was “moved by his [Steyn] having witnessed Strydom’s massacre, I felt he had to be that white male stereotype of a special kind that my generation of South Africans knows only too well. He would want to be ‘protected’ and treated as special in some way because he had always been told he was.”

Smith’s sentiments echoed my own when I first picked up this remarkable book. Do we really need another damaged white person who finds redemption through black suffering and pain?

Smith wrote: “Our history has been related by white men, through white men and with white men’s often-covert comfort in a shared white maleness. My experience and that of many other women has been that Bradley and millions of other white South African men like him were damaged, unable to recognise or – for some – atone for their violence. So, without the outlet of overt racism, they harmed women in frightening, private ways, privileged and sheltered by their masculine pain, and that was just what it was.”

Encountering Steyn at the Cape Town book launch in person it is evident he has, ever since that day in 1988, grappled with the demons that came to haunt him and which altered the course not only of his life, but his sense of self.

What Smith had also set out in her omitted foreword were the violent currents that shaped the shooter Barend Strydom’s life and worldview, his unconstrained psychopathic rage as a result of early childhood trauma and which found horrific expression in the murder of those he considered “not human”.

The ideology of apartheid cultivated and groomed feelings of superiority, hate, suspicion and fear. Strydom was not born a racist mass murderer. So, what was it that shaped his rage and his hatred beyond a political system nourished by these selfsame atavistic impulses?

“When Barend Strydom was 18 months old, his unhappy young mother died of a bullet wound. They were alone at home when it happened. She was 21, and court papers recorded with cold economy that she was ‘suicidal’ and in an ‘unstable marriage’ to Nicolaas (Nic) Strydom, a 22-year-old policeman. Barend – who later preferred ‘Hendri’, from his second name, Hendrik – was their only child.”

What the court documents also revealed was that “Hendri had survived a near-death incident a year earlier when he was six months old, ‘falling unconscious for a couple of hours’ after being smothered. And it is only the young woman who put a gun to her own head who knows why her small son had ‘blue strangulation marks’ on his neck the day she pulled the trigger. The child – who’d spent a fortnight in hospital under observation after being choked as a baby – had previously been admitted to the paediatric ward after surgery for a cleft lip and palate. If Hendri witnessed his mother unravelling before she raised the gun to her head, he was deemed oblivious to it.”

It has taken Bradley Steyn 30 long and difficult years to internalise the effects of what he witnessed that day in November.

Steyn now lives in the US, having fled South Africa. His life was under threat after he was exposed as an undercover operative for the ANC’s security wing (DIS). In the Western Cape, Andre Lincoln and Jeremy Vearey (both later to become generals in the SAPS) played a significant role – it was these two men who “turned” Steyn – as well as his original Special Branch recruiter, Neil De Beer.

Steyn’s book is an insider account of the depraved dirty tricks campaign of the ruthless Special Branch, under the cover of “legitimate” business, The Project Group, and ultimately aimed at destablising South Africa’s slow rise from white minority rule to democracy.

On the surface, the Project Group appeared to be a “legitimate” business offering security at clubs and restaurants in Cape Town. In reality, the outfit was a Special Branch project.

The blueprint for what has morphed today into a continued violent turf war around protection rackets in the city was set then. Today Vearey is one of those SAPS senior officers still trying to undo the grip of the criminal underworld on Cape Town’s nighttime economy.

If you want a history of where it all began, this is it.

But Steyn’s book is not just a rollicking read full of testosterone-driven skop, skiet and donner, treachery and treason, it is also about a young white man’s gradual attainment of wisdom, of understanding how psychologically, emotionally and spiritually corrosive the idea of unreconstructed whiteness is.

Steyn delicately highlights a matter that seldom receives attention in South Africa. And that is of the many bitter and broken white men who emerged from that long dark night – fighting the apartheid government’s war, while being left to lick their own wounds, forgotten and abandoned in its aftermath.

The white boy who saw the massacre on Strijdom Square, who found his “True North” as an ANC spy, has come a long way, but is aware there is still some distance to cross in order to heal the rift between white and black South Africans.

Sitting in the audience of the Cape Town launch on 4 June, was Selina Williams, sister of ANC activist and MK operative Coline, who along with Robbie Waterwitch was killed in 1989 when a defective landmine the duo was due to place at the Athlone Magistrate’s Court exploded. Coline was 22 and Robbie 20 when they died.

While their deaths happened only one year after the Strijdom Square massacre there is no doubt that the defective mine was handed to the cadres by someone who had infiltrated the then still underground movement.

Bradley Steyn’s book is yet another vital missing piece in the reconstruction and remembrance of South Africa’s past. His intention is to memorialise those South Africans who were killed and injured that day, all of them named in the book.

And while it is written as a thriller of sorts, it has depth and layering that render it so much more than that. DM

‘Undercover with Mandela’s Spies – The Story of the Boy Who Crossed the Square’ is published by Jacana.