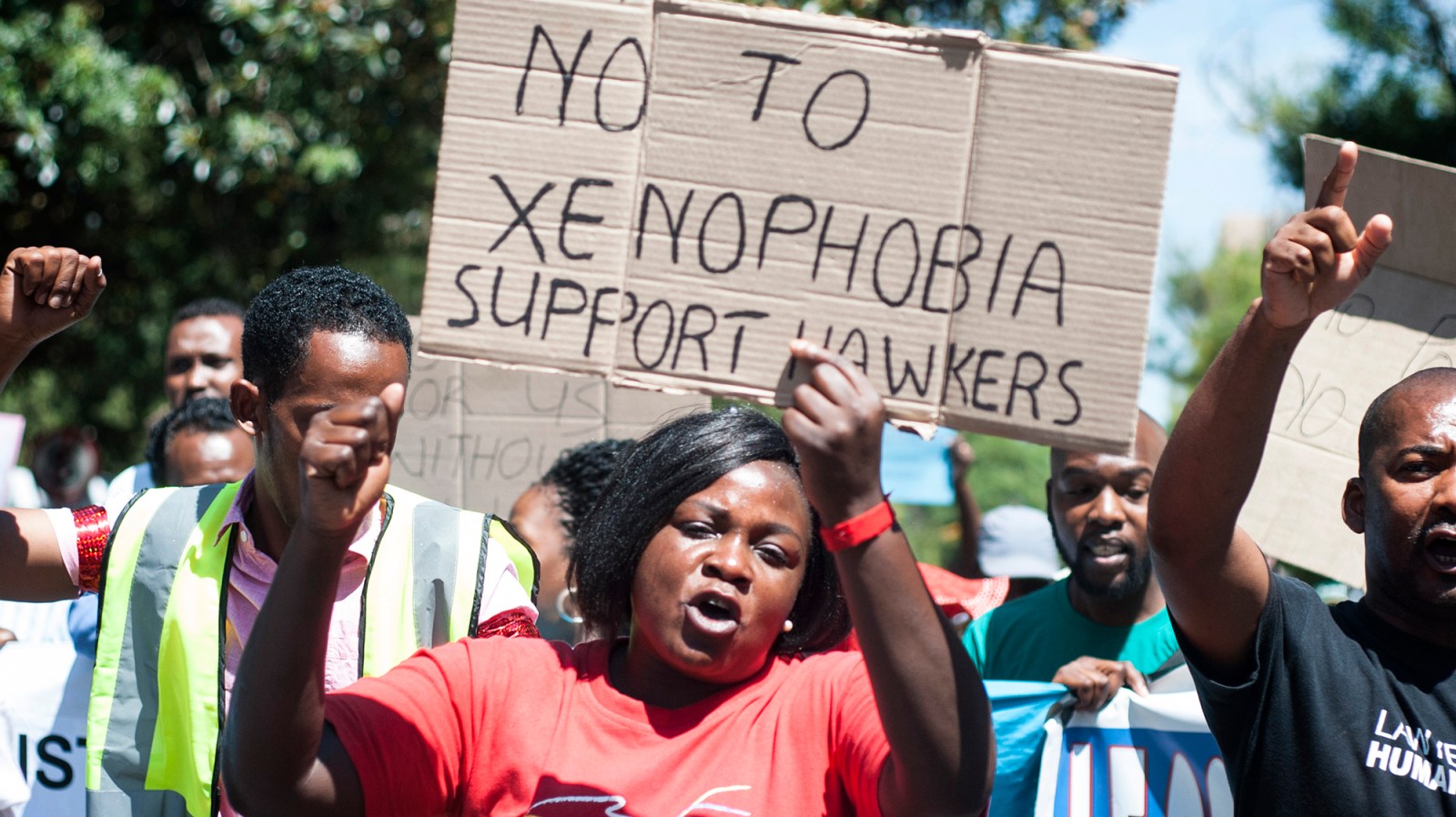 Community groups march against poverty and xenophobia to the Union Buildings on March 08, 2017 in Pretoria, South Africa.(Photo by Gallo Images / Thapelo Maphakela)

The fact that xenophobic violence in South Africa has surged less than six weeks from the elections is unlikely to be a coincidence. Several new political parties are running on a platform of overtly xenophobic policies, while politicians from the established parties have continued their doublespeak on the issue of foreign nationals. When violence flares up, there’s a predictable frenzy of buck-passing, but it’s overly simplistic to put all the responsibility on reckless political statements.

“ ‘All South Africans First’? On an actual DA poster?” he wrote. “Three things, DA: (1) I know it polls well but you are playing with people’s lives. (2) Lots of you have told me you’re horrified by this. (3) There is still time to stop this nonsense before it gets out of hand.”

The DA seems to have quietly retired the slogan since, but Coetzee’s warning that anti-foreigner campaigning can put people’s lives in jeopardy has taken on a new resonance in light of the xenophobic violence that has surged once again in South Africa over the past two months.

The DA is not alone. Almost all the political parties registered to contest the 2019 national elections have made the presence of foreign nationals in South Africa a campaign issue to some degree.

The newer the political party is, the more likely it seems to be to make overtly xenophobic promises to the electorate.

More established parties, meanwhile, have tended to rely on doublespeak and dog-whistle rhetoric when it comes to public messaging about foreign nationals. But the list of high-profile politicians who have made troubling statements about foreigners over the past two years is long: From Health Minister Aaron Motsoaledi to President Cyril Ramaphosa himself; Johannesburg’s DA mayor Herman Mashaba; the ANC’s Gauteng Premier David Makhura and deputy police minister Bongani Mkongi.

In light of the current upsurge in attacks on foreign nationals, politicians have rushed to condemn xenophobia – while sometimes in the same breath propagating the myths that fuel xenophobia.

The Freedom Front Plus, for instance, released a statement this week re-hashing the false sentiment that immigrants are responsible for the joblessness of South Africans.

“As unemployment increases in the country, the FF Plus expects to see more xenophobic attacks because South Africa’s citizens are being deprived of job opportunities,” the party wrote.

An outlier on the political party front in this regard has been the EFF, which deserves acknowledgement for making anti-xenophobia a pillar of its election campaigning before the current violence – a thoroughly anti-populist stand for a party often associated with cheap populism.

Consortium for Refugees and Migrants in South Africa spokesperson Abigail Dawson says that the use of foreign nationals as campaign fodder for South African politicians should be condemned.

“It cannot be correct and accepted 25 years into democracy that politicians are campaigning for votes at the expense of the most vulnerable groups,” Dawson told Daily Maverick.

“Politicians need to think of honest electioneering strategies which speak to the frustrations that South Africans are experiencing – systematic issues including corruption and an absence of management – instead of pinning these problems on already vulnerable migrants.”

Dawson says it also incumbent on the Independent Electoral Commission to keep monitoring the statements of political party leaders “to ensure that they are not promoting hate speech in communities”.

Yet it is also argued that political parties are reflecting widespread concerns in South African society about immigration and scarce resources which warrant being aired openly in a constructive manner, without the speaker being reflexively shot down for xenophobia.

Wits migration expert Loren Landau has previously written that South African narratives around migrants in academia, civil society and the media may be “doing more harm than good” in focusing almost exclusively on migrants as the subjects of random victimisation and the objects of pity.

This focus, Landau wrote, “prevents empathy from citizens grappling with the competition for scarce resources such as houses, or for jobs, as well as the ethical dilemmas of migration” and ignores the reality that the effects of immigration on local communities can be “unsettling and disorienting, especially during times of economic hardship and political transition”.

Laundau suggests it is unhelpful for journalists to “overlook or suppress unsavoury elements of migrants’ histories and activities” for fear of feeding anti-immigrant sentiment, and similarly unhelpful to “quickly condemn South Africans as thoughtless purveyors of violence”.

The fact that xenophobic violence is flaring so close to elections is likely due not just to irresponsible campaigning from politicians, but also a wider social atmosphere of political uncertainty and economic precariousness.

Sally Hurt, advocacy head at migrant resource NGO Scalabrini, says that the current violence is probably linked to “a general sentiment of disenfranchisement despite having a vote”, in terms of the “socio-economic exclusion felt by many” in South Africa.

Hurt believes that when this sense of anger and anxiety collides with widespread misinformation about the presence and impact of foreign nationals in South Africa, violence can erupt.

Dawson agrees, pointing particularly to the myth that “a high rate of unemployment among South African youth is caused by the existence of migrants in communities, whereas the kinds of positions that migrants undertake are [mostly] informal and precarious”.

Another factor believed to fuel xenophobic violence stems from the lack of criminal consequences for those responsible for attacks on foreign nationals.

In a recent statement, Human Rights Watch noted with concern:

“Virtually no one has been convicted for past outbreaks of xenophobic violence, including the Durban violence of April 2015 that displaced thousands of foreign nationals, and the 2008 attacks on foreigners, which resulted in the deaths of more than 60 people across the country.”

Police themselves, meanwhile, have been repeatedly accused in the past of unwarranted and heavy-handed treatment and harassment of foreign nationals.

The reality that xenophobic violence is constantly ongoing, and not limited to election season, is also under-acknowledged – as is the fact that xenophobia appears to stain practically every sector of South African society.

The death of a Tanzanian student at the University of Johannesburg in February 2018, for instance, attracted relatively little attention – yet “potentially marks the first known violent xenophobic attack on a South African university campus”, researchers wrote at the time.

Politicians must indeed be held to account for reckless and inflammatory statements about foreign nationals, particularly when these are based on false information. But even if local politicians were all gagged at once, xenophobia would not disappear from South Africa overnight.

“There is definitely more than can be done by all sectors of society,” says Hurt. DM