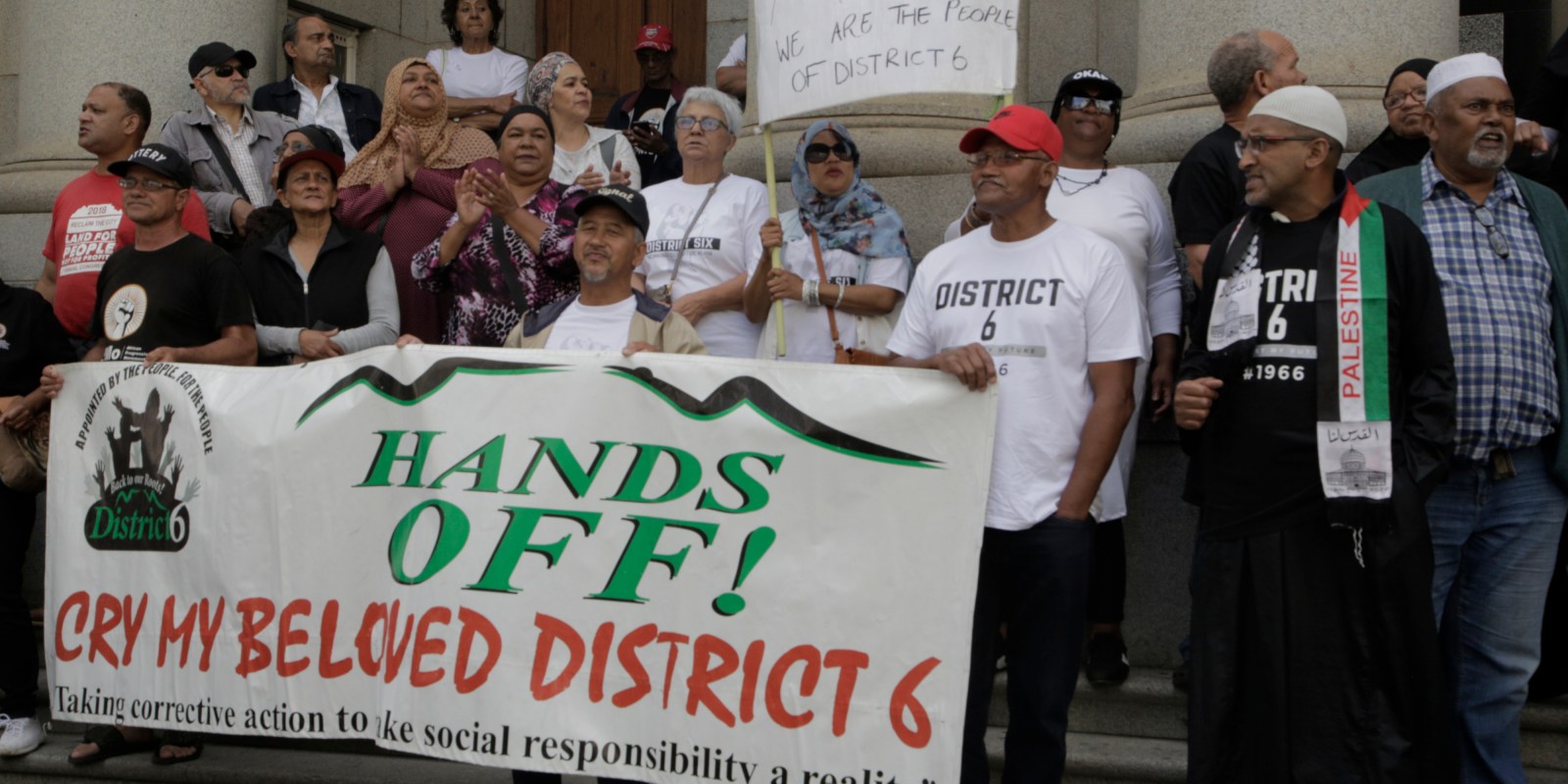 Former District Six residents gathered on Monday morning at the Western Cape High Court for the court date between themselves and the department of Rural Development and Land Reform. By: Sune Payne, 26 November 2018

People who have outstanding District Six land claims will be able to move back to the area after a ruling by the Land Claims Court in Cape Town on Monday. The group behind the court application said it was the first step towards restorative justice for people forcibly removed from their homes under the apartheid regime.

“It’s about restorative justice, to restore economic emancipation, social cohesion, identity and a sense of urgency,” Shahied Ajam told Daily Maverick on the steps of the Western Cape High Court in Cape Town on Monday morning.

Ajam is the chairperson of the District Six Working Committee, an organisation representing claimants — in this case former residents of District Six — who had taken the Department of Rural Development and Land Reform to court in April seeking a declaratory order to admit the department failed in its constitutional obligation to provide restitution to former residents.

The case was heard on Monday morning by the Land Claims Court, sitting at the Western Cape High Court.

The group, with legal representation by Norton Rose Fulbright, sought a structural interdict alongside the declaratory order, which would compel the department to provide specific timelines as to when housing plans would begin for claimants to move back into the area, more than 40 years after residents were removed under the apartheid-era Group Areas Act. The forced removals turned the racially mixed District Six into a whites-only area.

Residents were sent to live in townships on the Cape Flats, such as Hanover Park and Manenberg and Mitchells Plain.

The Land Claims Court heard on Monday that after the 1998 cut-off date for land claims, there were 1,216 verified claims for restitution from former District Six residents, who opted to move back to the area instead of receiving financial compensation. Thus far, 1,078 claimants have not received restitution.

Judge Jody Kollapen ordered the Department of Land Reform and Rural Development to:

Judge Kollapen ordered that the applicants, in this case the claimants, can approach the court again to determine if the plan satisfies the constitutional obligations of the department.

He reserved judgment on two orders — the first to declare that the Department of Rural Development and Land Reform had failed to provide restitution to the claimants under the Restitution of Land Rights Act of the Constitution. The other relates to the legal costs of the case.

The case was brought to public attention in April after residents from the District Six Working Committee opted to take the department to court — since some residents seeking to move back into the area are elderly and wish to move back before they die.

Lawyer for the state Sean Rosenberg told Judge Kollapen that while the state “recognises that there is a need to settle the 1998 verified claimants”, the District Six project was unique and complex.

Rosenberg explained that the case did not involve an individual claimant, but rather a larger group, and that the area was relatively large. Later in the proceedings, Rosenberg admitted that the constitutional obligation had not been fulfilled. He insisted, however, that the department did not accept that they were in breach of the Constitution.

Geoff Budlender SC, for the claimants, told the court that “the only sadness is this step has taken this long”, and that things could have been better had restitution for the claimants who had been removed from District Six been granted earlier.

Judgment on the two outstanding orders would be heard either before the end of the court term or in early January 2019.

After the judgment, Ajam told Daily Maverick that the result meant “we’re going forward, it means we can start on the tangible parts of District Six”.

“We’ve suffered over 100 years; we’ve been subjected to abuse,” said Ajam, who spoke extensively on how this case could restore the rights of people, especially people of colour, whose rights had never been acknowledged in the past.

Ajam told Daily Maverick that the descendants of the formerly displaced generation who would now move into District Six needed to be educated about the area’s history. DM