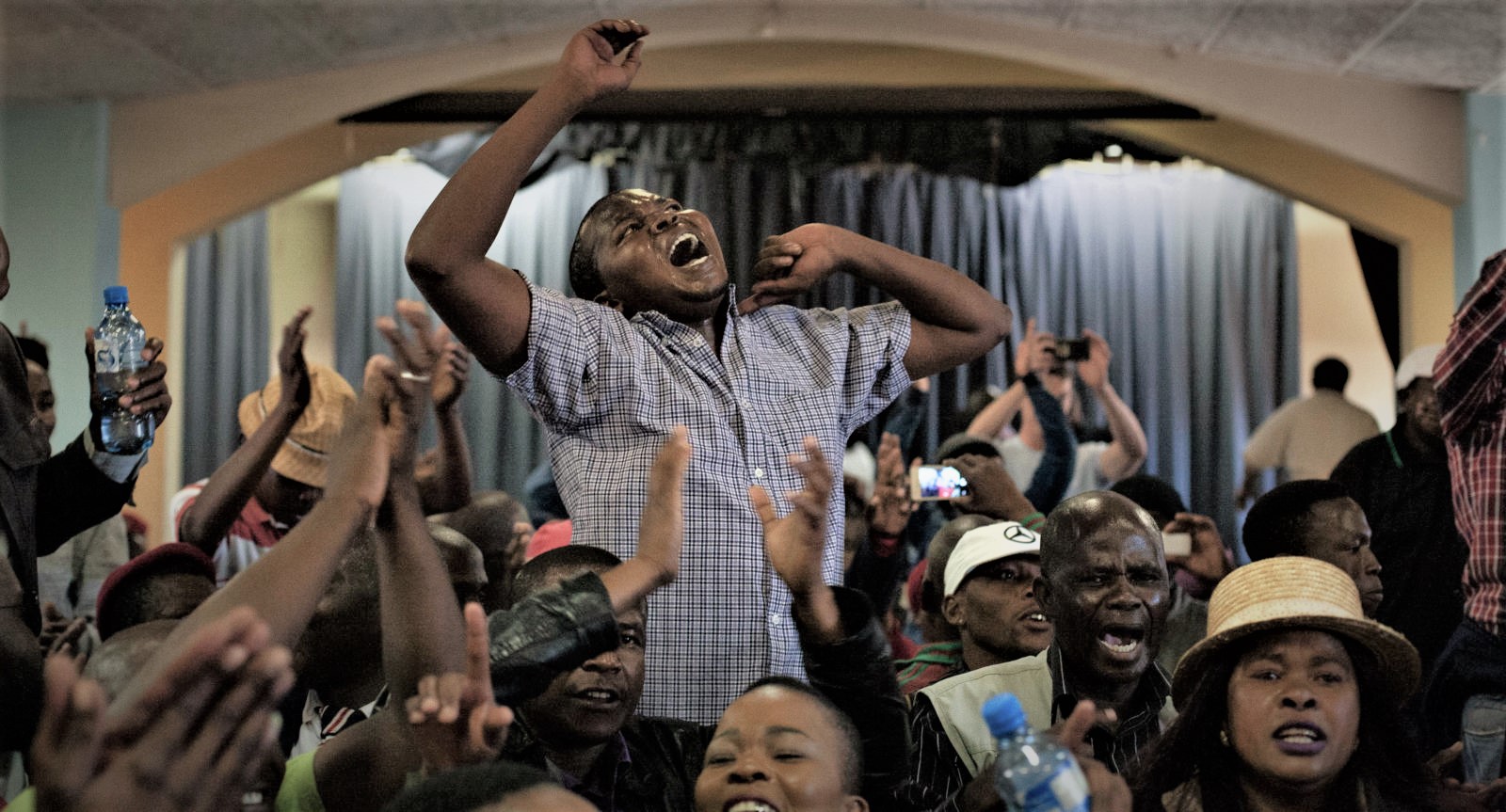 An attendee of the public hearings on changing Section 25 of the Constitution sings ahead of the sitting in Ebrahim Mogale, Limpopo, 27 June 2018. Photo: Greg Nicolson

Parliament’s constitutional review committee is hurtling towards finalising its report on a constitutional amendment for expropriation without compensation. It’s a fractious process as last week’s committee meeting showed, and Thursday’s meeting to discuss recommendations undoubtedly will be no less so. It’ll all have to be wrapped by the time Parliament rises for its year-end recess in four weeks. But a resolution of the House is just another step in what remains a drawn-out path of political potholes — and possible legal challenges — unlikely to be finalised before the 2019 elections.

While processes and formalities must be observed — these will allow opposition parties to state their case — the outcome is not really in doubt. The EFF, which has vocally led the push for expropriation without compensation, holds the numbers, with the ANC that after its mid-year lekgotla had party president Cyril Ramaphosa endorse expropriation without compensation during a late-night television address.

“The ANC will, through the parliamentary process, finalise a proposed amendment to the Constitution that outlines more clearly the conditions under which expropriation of land without compensation can be effected. The intention of this proposed amendment is to promote redress, advance economic development, increase agricultural production and food security. It will also transform the unjust spatial realities in urban areas,” Ramaphosa said in a televised broadcast styled as address to the nation after 22:00 on 31 July 2018.

In February 2018 the ANC had supported an EFF motion on such a parliamentary process towards land expropriation without compensation — although the EFF push for land nationalisation was tempered with a series of amendments to bring the motion more in line with the ANC resolution at its December 2017 national conference, including that it should not impact food security or agricultural production and that there should be consultations.

That the ANC resolution made it was because of a last-minute push — quite literally late at night on the last day, accompanied by fisticuffs — by the radical economic transformation grouping associated with former president Jacob Zuma and narrowly losing party presidential candidate Nkozasana Dlamini Zuma.

The parliamentary motion of 27 February 2018 established the constitutional review committee process in play since then — including extensive countrywide public hearings in 34 venues where expropriation without compensation emerged as shorthand for social justice, more than 440,000 written presentations that were largely opposed and two rounds of oral presentations in Parliament.

Without a report on the written submissions, regardless of their vast numbers, there was a risk the committee was failing its constitutional responsibilities, said DA MP Glynnis Breytenbach:

“I caution all of us, if we fail to engage properly with all the written submissions the workings of this committee will be undone.”

But that was overruled as the committee co-chairpersons agreed that all members had had the opportunity to look at the written submissions themselves. And, in any case, the 40 oral presentations from banks, agricultural and farming groups, academics and civil society heard in Parliament in September were drawn as a sample from the written submissions that were largely opposed to land expropriation without compensation.

The point that government had all tools, laws and measures necessary to do land reform in the interest of more equitable ownership patterns — similar to the argument by the High Level Panel chaired by former president Kgalema Motlanthe — was often repeated in the September parliamentary public hearings.

Of course, there are constraints, including state-owned entities (SoEs) rather wanting to keep land on their books to boost balance sheets than donating or exchanging it to or with another state entity as the Government Immovable Asset Management Act allows. Or that the Office of the Valuer-General, officially established in August 2015 to value land and properties countrywide, only in June 2018 was able to appoint six additional valuers to boost its total numbers to nine, according to its 2017/2018 annual report.

But in the constitutional review committee on 1 November it frequently got terse as positions were pushed.

“We are not dealing with a referendum. Numbers don’t matter,” EFF National Council of Provinces (NCOP) delegate Tebogo Mokwele sharply argued in support of attention to the countrywide public hearings where support for expropriation without compensation emerged strongly, with support from fellow EFF NCOP delegate Tsapane Mampuru:

“The basis is what is it that is good for South Africa.”

The committee descended into chaotic verbal exchanges, including one in which Mokwele referred to African Christian Democratic Party (ACDP) MP Steve Swart as one “of white people” after he made a suggestion on the draft report. When he objected to “this racial statement. She’s casting aspersions on me”, it took a while for the comment to be withdrawn — unconditionally, after Mokwele repeatedly said “I withdraw the truth.”

And then Mokwele, who at an earlier committee meeting took exception to Matthew Parks representing Cosatu: “Today Cosatu does not represent the majority of South Africans… (but) advances the interests of the white minority,” she said in September — had a go at FF+ Chief Whip Corne Mulder over his queries.

“You don’t make a member (of Parliament) your project. Leave Honourable Mulder alone,” said Nzimande, with Maile earlier having said: “You are making my life difficult!”

It’s unlikely Thursday’s meeting will be any easier. The political parties are expected to bring their suggested observations and recommendations so the draft report can be finalised.

There is time pressure. The constitutional review committee’s life span for this review of Section 25 of the Constitution has already been extended twice. Originally it was meant to have completed the review at the end of August, then September. The final deadline now is the end of November, when the expected debate and vote in the House will be among the last matters dealt with before Parliament rises for the year in early December.

It would be up to Parliament to decide, as it also would on the law of general application that usually goes with a constitutional amendment bill — in this case, the Expropriation Bill.

A previous version was rejected earlier this year after it had stalled in Parliament for more than a year because of the political debates around the constitutional amendment and then its process. That expropriation draft law is now being redrafted — although it is unlikely to be finalised before the 2019 elections.

Deputy Public Works Minister Jeremy Cronin said the revised draft Bill would be taken quite quickly to Cabinet and should be out for public comment by year-end.

That process will unfold alongside the processing of constitutional amendment draft legislation. And along the way there will be political fights.

There will be contestation between the EFF that has successfully driven the expropriation without compensation debate with a view to nationalising all land for the state to own, and the ANC, which has emphasised food security, agricultural production, consultation in an overall more moderate position.

And within the ANC there is pushback against this restrained position that looks at expropriation of unused and/or heavily indebted land, vacant buildings and land held only for speculative purposes, as had been agreed at the May ANC land summit in line with the December 2017 ANC Nasrec national conference.

That conference resolution lists expropriation without compensation as “among the key mechanisms available to government to give effect to land reform and redistribution” to be pursued so as to “not undermine future investment in the economy, or damage agricultural production and food security… (and) not cause harm to other sectors of the economy”.

There are political processes to manage inside and outside the governing ANC — and that’s on top of the parliamentary legislative processes to produce both a constitutional amendment bill, the phrasing of which will be sharply contested, and an expropriation law of general application.

Anyone hoping to go into the 2019 elections with expropriation without compensation a done deal, is setting themselves up for disappointment. DM