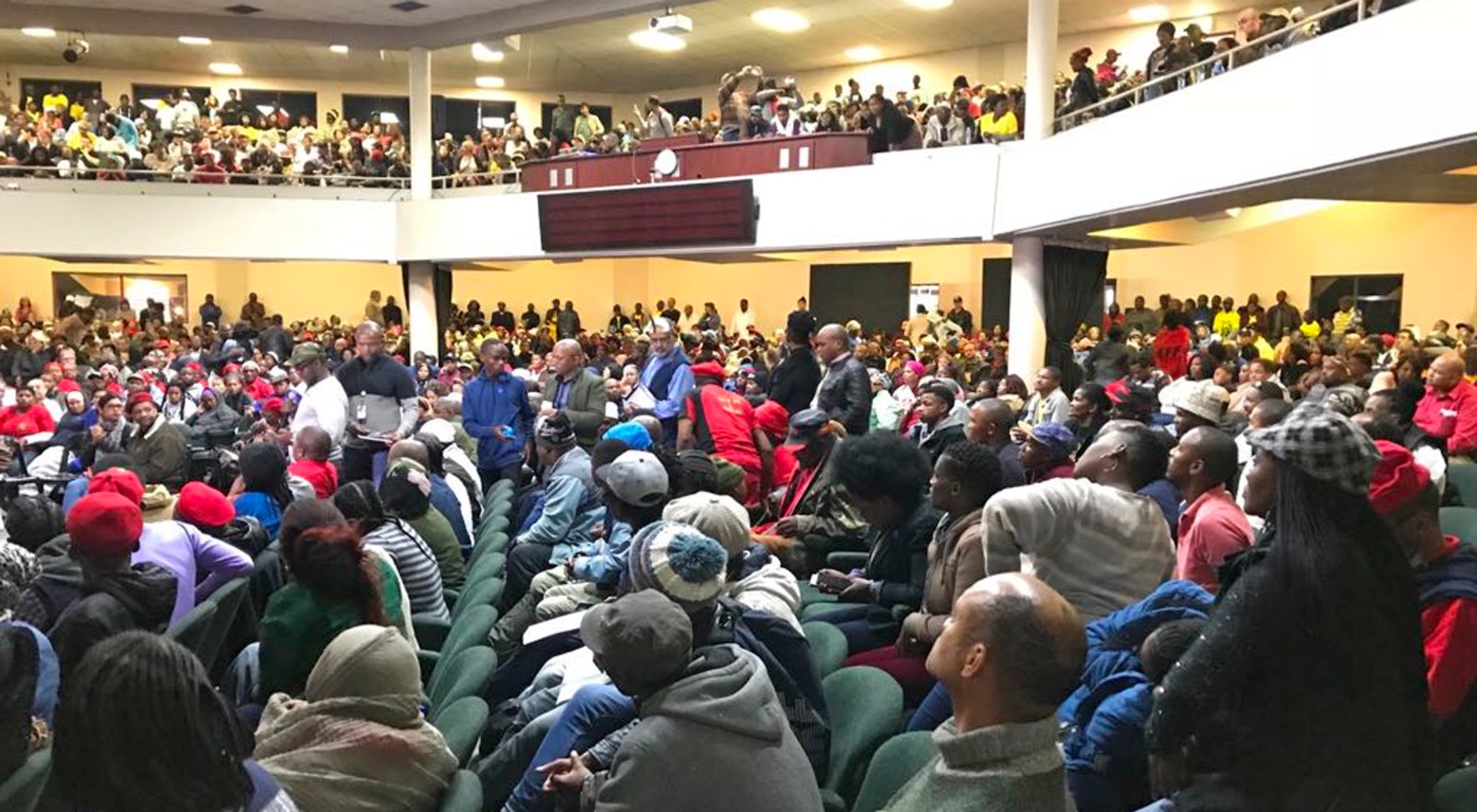 There were a few moments when the 2,000-strong audience in the Friend of God church lost its patience, goodwill and tolerance during the over six-and-a-half hour session. (Photo by EFF via Twitter)

It was a rough and tough final session of Parliament’s public hearings on amending the Constitution for expropriation without compensation in Cape Town at the weekend. If the 34 public hearings across nine provinces over the past six weeks has shown anything, it is that 24 years of unsolved and flailing land reform, restitution, redistribution and tenure security has left a legacy of pain, frustration and rising anger.

The gathering in Cape Town in many ways became a political rallying point – a final show of force for the EFF which has mobilised throughout the process, a moment for the ANC to push its support cohesively as it has not really done before, and for the DA.

And there were oddities, like the Cape Party that argued that the whole issue was one of corruption, while also stepping into public view was Peter Marais, the former Western Cape premier, Cape Town mayor, one-time National Party and DA member turned now to focus on coloured people’s interests.

There were a few moments when the 2,000-strong audience in the Friend of God church lost its patience, goodwill and tolerance during the over six-and-a-half hour session.

One was when a young black woman advocate spoke against compensationless expropriation from the gallery of the church, and a black man stood up downstairs to insult her loudly. Another was when a blonde white woman in pink channelled sentiments similar to Western Cape Premier Helen Zille’s colonialism tweet, saying without colonialism there would be no roads and no malls. And tensions ratcheted up to the verge of shuffles when a white guy dressed in army khaki coat vowed to fight back:

“For those who threaten us with war, there are no winners in war. I am a veteran of war… I will defend my nation to death…”

Constitutional review committee co-chairperson Vincent Smith was on his feet, firmly ordering calm and tolerance. And cool composure prevailed. Smith, switching between queue marshal, selector of speakers with a firm bias towards women speakers and general school masterly enforcer of discipline, also stepped in when zest spilled over when enthusiastic party supporters clapped, whooped and cheered their speakers.

“It’s your choice. You can make noise till 4 o’clock. Then we will go home and the voice of the Western Cape will not be heard.”

As it turned out, the meeting went over time, until 16:42 to be exact. But everyone got a chance to speak. Whether that was to put in a vivid argument that the only rightful owners are the Khoi-San, South Africa’s First People, or to speak about ill-treatment and official deafness to complaints about a social housing not-for-profit organisation.

As in the Western Cape’s hinterland the overwhelming majority of voices in the Cape Town hearings were for expropriation without compensation, as redress for social injustice, inequality and poverty. In this, the final public hearing was no different from the first such gathering at the end of June in Limpopo.

Women on Farms, a non-governmental organisation, highlighted farmworkers’ plight. Or, as Bettie Fortuin put it, farmworkers have nothing.

“They say the land belongs to those who work it. That’s not true. If your husband dies, they (farmers) shift you off the farm. They shift you to a shack… an RDP (house)… But there’s boere that own 13, 14 farms… That’s why I support expropriation without compensation with all my heart.”

But housing, and access to housing on land close to job opportunities, dominated the occasion, given that Cape Town is an urban conurbation – and approximately two-thirds of the Western Cape’s six million residents live in the greater city sprawl.

However, access to housing is a deep-seated sore for black residents and the working classes as Cape Town’s housing market is superheated way above national prices, and gentrification is leading to scores of evictions in areas close to city jobs.

Parliament’s constitutional review committee on Saturday repeatedly was told how black South Africans were left to “live like rats on top of each other” in shacks as the council failed to build houses.

“People in Gugulethu don’t have property… We live like hobos,” said one speaker, as another later echoed this.

“We are living in shacks on top of each other in Du Noon. We want to live properly.”

And land was needed not just for farming, argued on EFF supporter, but for other economic activity such as a car dealership, a warehouse or a factory. But no such land opportunities were facilitated, and unless there was R3-million to invest, there was no chance, he added.

“We will take the land back even if it means we go back to the dark ages. We don’t care about that,” one man argued, while another from Hout Bay told the committee:

“We are already taking back the land. The police can’t do anything. They sent us polite letters to come to court.”

And one speaker, sporting an ANC “thuma mina (send me)” T-shirt, also argued for the taking of land, no matter what. It’s not the governing party’s position, but in those public hearings, sometimes emotions trump party line.

A DA supporter, Wendy, as she identified herself, also supported compensationless expropriation, in contradiction to her party’s stance – reiterated earlier on Saturday by DA national leader Mmusi Maimane.

“Land expropriation without compensation is not the silver bullet that will ensure justice. In fact, the very opposite. It will undermine private property rights and hurt our economy and jobs. It will scare away investment, which is vital for job creation and economic growth,” Maimane told a group of party supporters, speaking from the back of a truck just opposite the public hearing venue.

The ANC had organised a series of speakers, most of them not wearing party T-shirts, to argue what is a tough point in the face of popular sentiments equating expropriation with redress. Yes to expropriation without compensation, but in a manner that does not undermine economic activity, food security and agricultural production.

There are some interesting ideas coming up from branches like Gaby Shapiro, in the rather suburban middle-class Rondebosch, including expropriating game farms and golf courses and capping the number of farms someone could own.

The EFF has an easier case to argue, as its members and supporters did again on Saturday: nationalisation of land and expropriation without compensation.

And EFF Deputy President Floyd Shivambu told SABC that Parliament should move quickly to “adopt a constitutional amendment so we go to elections with certainty in terms of the issue of land ownership and control in South Africa”.

For the EFF, this would provide a powerful election tool on the back of astute and comprehensive mobilisation on the land issue. But Parliament can move slowly.

Smith and committee co-chairperson Lewis Nzimande on Saturday again emphasised that there’s still a way to go, including another round of public hearings, selected from over half a million written submissions. The report on whether a constitutional amendment should be pursued is due at the end of September. Only if it’s a yes will the process to draft, discuss and deliberate on the actual constitutional amendment unfold.

And that may well take its time – leaving land, expropriation without compensation and land reform as key, and emotive, 2019 electioneering campaigns. DM