A platform for hearing the voices long unheard

A platform for hearing the voices long unheard 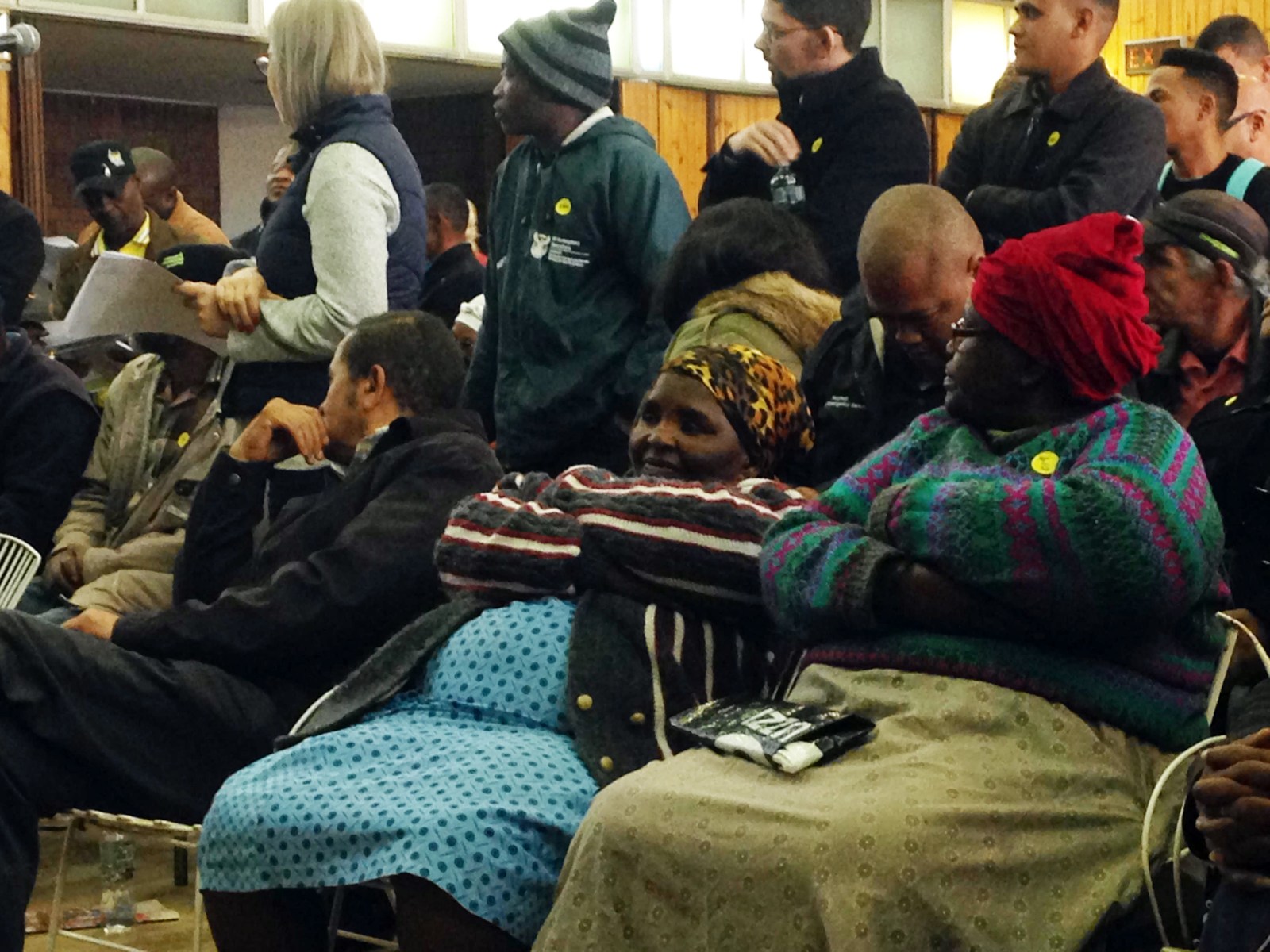 Speakers line up to address the parliamentary committee during land hearings in Beaufort West on 2 August, 2018. Beaufort West is the Central Karoo government administrative hub and key transport link, but also an agricultural and farming centre. Photo: Marianne Merten

Expropriation without compensation is shorthand for social justice and redress for dispossession, poverty, inequality and some two decades of flailing land restitution and reform. That emerged, again, at Thursday’s parliamentary public hearings in Beaufort West on an amendment of the Constitution’s property clause, Section 25. Farmworkers, small-scale farmers, commercial farmers and others mingled in a set-up where those with power, and those without, are on an equal footing. Three minutes speaking time: no more, no less, unless by speaker’s choice.

“I must talk of my father. I must talk of land near Loxton. My father lived there. I was born there. I started working there. I lived there until I was 13,” Saul Louw, now 71, recounted in Afrikaans the day his family was “chased away” by the farmer’s son, who had returned to start running the farm. He had grown up with the other son of the farmer.

“Our house was full of furniture. My father had a donkey cart. The day my father was chased away he was very sick… but we put him on the donkey cart… My father died soon after. I buried him near Victoria West.”

Louw afterwards told Daily Maverick he had put in a claim for land and, while “some people did come back a few times”, eventually he was told the money was stolen. And that was it.

“I was dispossessed with my parents. We had two shops. We lost our school. We lost our house… My father had geese. He built a pond for them. Our house had a big stoep.”

Both speakers supported expropriation without compensation.

There was no need to tell personal experiences at theses public hearings on a rather narrowly phrased question:

Do you support, or not, the amendment of Section 25 of the Constitution to allow for expropriation without compensation?

But many people have opened up about their experiences, and so these public hearings, perhaps unintentionally, have given voice to those more often than not unheard. And that must be a concern in a participatory democracy like South Africa’s.

Again, the politicians were out in full force. The ANC, EFF and the sole Pan-Africanist Congress (PAC) speakers all clearly identified their political membership, but DA member of the Western Cape legislature Beverley Schäfer chose to go incognito – and opened her three-minute speech with:

Asked by Daily Maverick whether not disclosing her political status as DA MPL did not amount to deception, Schäfer dismissed this, saying she hoped she had been able to articulate a view also held by others.

In her speech, Schäfer, who serves on the Western Cape legislature’s agriculture committee, criticised the meeting as “a waste of taxpayers’ money”, given that ANC President Cyril Ramaphosa had announced a constitutional amendment even before the completion of the public hearings in the Western Cape, run by the DA.

The wasting of taxpayers’ money bit comes straight out of the DA playbook, and was repeated by several white speakers, who also echoed this, indicating some level of co-ordination of input at the Beaufort West public hearings. In July, the DA held its own meetings on the land in the four towns selected for the parliamentary public hearings.

Elsewhere on the party-political front, the ANC this time mustered several speakers, including one-time Beaufort West mayor Truman Prince. All were in favour of a constitutional amendment for compensationless expropriation, and backed that up with speaking notes ranging from invocations of the Freedom Charter to a host of land statistics.

The EFF was there, not so much in red regalia as in Oudtshoorn a day before, but representing structures and communities. And the EFF got credits in other ways, too: for letting people know about these public hearings, and from one elderly man dressed in farmworkers’ safety gear, speaking in isiXhosa, a thank you for “waking up people”.

As in Oudtshoorn a day earlier, in Beaufort West there is a sense of impatience for compensationless expropriation. Again, some speakers reminded the parliamentarians there’s an election coming up in 2019 and if nothing happened, “we will punish you”, as one put it.

None of that is yet on the radar. What is in the public discourse, in no small way because of these parliamentary public bearings, are the accounts by black South Africans of the pain, distress and lasting impact caused by land dispossession and the lack of opportunities to return to land in democratic South Africa.

And among those are small-scale farmers, who on Thursday highlighted the inadequacy of current land reform provisions. Separate accounts were given of how 60 farmers shared 3,000 hectares, how when their livestock numbers grew (as happens when one is a successful farmer) animals either had to be sold or, as one speaker put it, were allowed to “graze at Laingsburg, beside the N1”.

Leonie Cronje, representing small-scale farmers, spoke in support of changing the Constitution, but with a caution to politicians.

“The failure of land reform can not be blamed just on willing seller, willing buyer, but the lack of political will,” she said, adding how small-scale farmers are not being included in land reform discussions.

And that’s just it. Government has to date at best been lacklustre on the land reform, restitution, redistribution and tenure security front. It’s one of the reasons land has exploded in the public discourse, and political narrative, the way it has in 2018.

And most if not all of the white speakers are latching on to such governance failure as a central reason for opposing any constitutional amendment. Often that argument is accompanied by general words of support for land reform, although the unspoken “Don’t touch me on my farm’” nevertheless is clearly heard. Sometimes it’s quite blunt:

“It’s because of the failure of this government that we are on the brink of this land theft,” said AfriForum’s Wikus Swanepoel on Thursday in reference to expropriation without compensation.

And on occasion, there is a promise of a fight, given the choice of packing up – “Australia, toe” came the shout from the back – or standing one’s ground.

“We will not step away without a fight,” said local farmer Tiaan Theron, who described himself as “a child of the Karoo and the grandchild of a grandfather who looked after his family under a donkey cart. I did not steal a hectare of land…”

Beaufort West is the Central Karoo government administrative hub and key transport link, but also an agricultural and farming centre. Statistics touted on Thursday talked of 452 farms at Beaufort West alone, with hundreds of others across the district, 690 of them in the Prince Albert area. Yet only 25 farms are registered “in the name of previously disadvantaged” as the parliamentary committee was told.

And everyone has a land tale: like the fallow farms near Leeu Gamka, where the community made enquiries, but is getting no word back from officialdom, or the farm bought by a consortium from Pretoria that was now “putting out” people.

The heartache remains the same. As the first speaker on Thursday said:

“They took our dignity. We want our land back. That’s why Section 25 must be amended”. DM