Schools can work – even when bureaucracies don’t 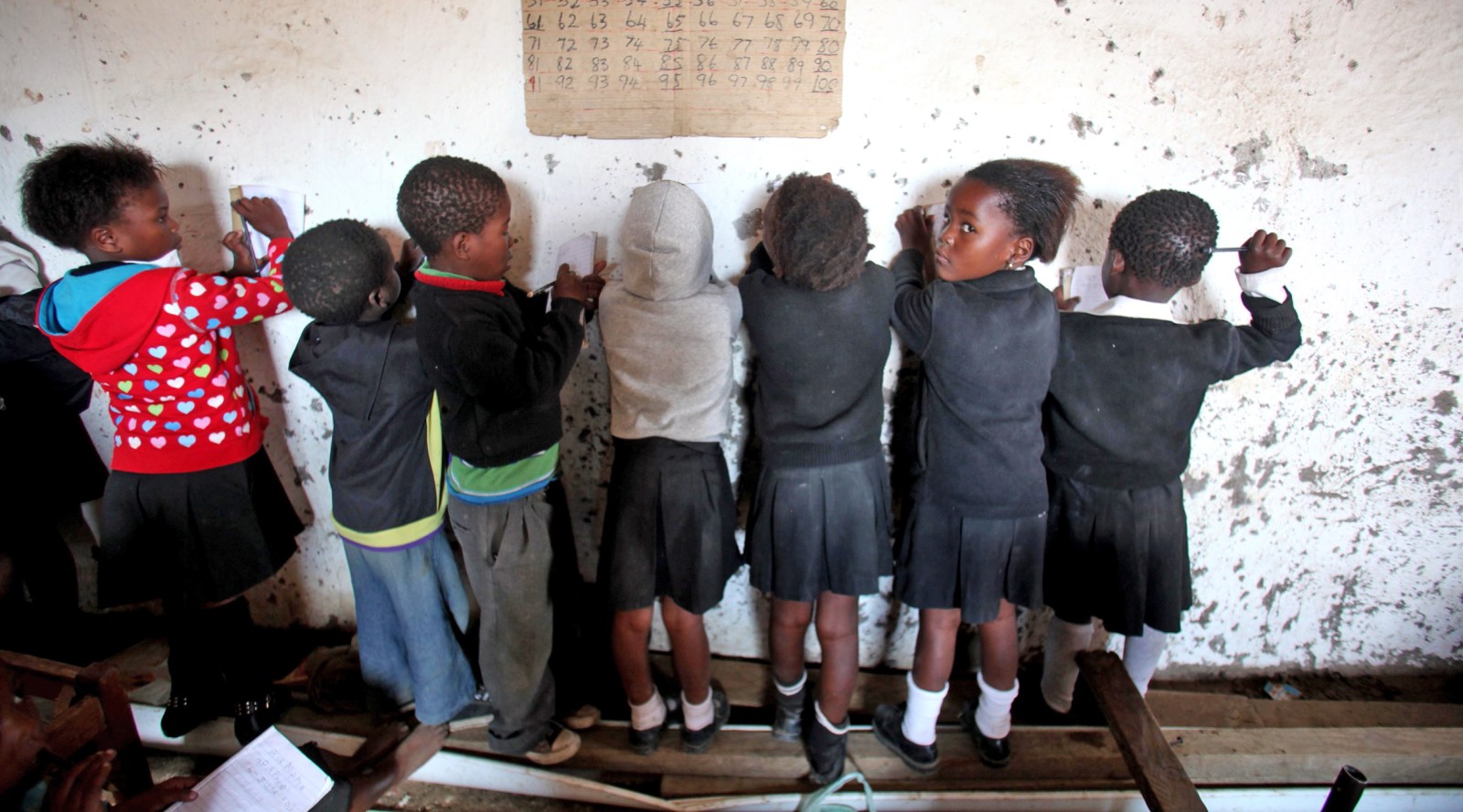 Children at Mwezeni Senior Primary school in the Eastern Cape have to balance their books on the wall to do their work as their school does not have desks or chairs. (Photo by Gallo Images / The Times / Shelley Christians)

In looking for a “silver bullet” to improve the quality of South African schools, a focus on principals and their selection would be a good candidate. As researchers the world over have shown, the quality and commitment of a school’s principal can have a decisive impact on performance.

This is the second of a three part series. Read part 1 here

At the dawn of democracy, South Africa embraced a participatory mechanism for the selection of school principals (and, indeed, for school-governance more broadly). The 1996 South African Schools Act (SASA) specified that decision-making vis-à-vis the appointment of principals would be shared between provincial-level bureaucracies and school governing bodies (SGBs) in which parents are a majority. Motivation for giving authority to SGBs came from two very different sources: from affluent parents who were beneficiaries of apartheid-era public schooling and feared the consequences of losing control; and from anti-apartheid activists who embraced a participatory vision of democracy.

As is well known (and was confirmed by the UCT research which is the basis for this series), the principal-selection process can all-too-easily be captured, especially in schools in low-income communities. The result can be the appointment of principals who lack the requisite skills or, worse, who view the school as a resource to predate on. In response, a late 2017 draft Basic Education Law Amendment (BELA) issued by the Department of Basic Education proposed to consolidate more authority for selecting principals within provincial education bureaucracies.

Affluent communities have, for obvious reasons opposed the BELA proposals. But what of the impact in low-income communities? Evidence of capture notwithstanding, the UCT research findings give reason to be cautious about the centralisation of control over school-governance – and reason to look afresh at the participatory governance impulse which animated the early years of South Africa’s democracy.

Consider the example of the Eastern Cape. The UCT research included both an in-depth analysis of how the Eastern Cape Department of Education (ECDoE) operates, and a micro-level analysis of how governance played out in four case study schools located in low-income communities. As the research showed, the ECDoE bureaucracy is fragmented, highly politicised, and riven with patronage. There was no sign that it was a force for professionalisation of appointments. Shifting responsibility for principal appointment from SGBs to provincial bureaucracies might, in some locales, thus be akin to furthering empowering the fox to guard the chicken coop.

But even where bureaucracy works well (as in the Western Cape Education Department, the focus of Part I of this series), the findings from case studies of principals and their succession conducted in four Western Cape schools in low-income communities suggest that shifting responsibility from SGBs to bureaucracies may not be a good idea.

The case study schools comprised matched pairs located within a few kilometres of one another; as of the outset of the period studied, one school performed well, and the other poorly. In both of the initially high-performing schools, top-down leadership by the principal was key to success, with consistent support from the WCED helpful in buttressing these principals’ authority. But both principals left little scope for participation by SGBs and the broader community; school-level decision processes were hollowed out. In both schools, when it came time to navigate the principal selection process, the seemingly formidable strengths of the WCED’s bureaucratic hierarchy ended up being trumped by machinations involving low-level bureaucrats, senior school-level staff, and parents more interested in capturing control of resources than improving educational outcomes. Indeed, in both schools, within a few years after the departure of the ‘successful’ principal, performance collapsed.

For scholars of bureaucracy (see here, here, here and here), the above pattern comes as no surprise. As the WCED exemplifies, while there are some tasks which well-functioning bureaucracies consistently do well (managing budgets; allocating staff to the right places; providing infrastructure; and the like), they often are less effective at performing tasks where performance is strongly influenced by local-level information, accountability and motivation. They lack the ‘local’ eyes and ears to manage these ‘street-level’ tasks effectively.

For principal selection, one way for bureaucracies to partially compensate for their weaknesses could be to introduce a competency test for prospective candidates. A measure along these lines has indeed been partially implemented in the Western Cape, against strong resistance from the teachers union, SADTU. But might such measures usefully be complemented with more, rather than less effort to enhance the effectiveness of the participatory, SGB dimension of school governance?

Of the eight schools studied across the two provinces, only in one – in the Eastern Cape – did performance remain relatively strong throughout the period of study. The approach to leadership of that school’s principal was very different from that of the two “successful” Western Cape schools. As detailed here and here, this school had successfully inculcated a set of collaborative governance arrangements where all stakeholders – teachers, the SGB, the extended community – felt included. This inclusive culture supported a smooth process of principal succession. The successor principal, an internal candidate from within the teaching staff, had been mentored by the initial principal, enjoyed the support of the SGB and, once appointed, continued along the path that had been established.

A second Eastern Cape school illustrates how multi-stakeholder engagement can underpin positive performance turnaround. This school had long been characterised by sustained, neglectful and predatory leadership on the part of an often-absent principal. The number of learners in the school had fallen from close to 1,000 in the early 1990s to a low of 341 in 2011. After over a decade of ongoing dysfunction, a group of parents and some SGB members met, and jointly reached the view that the principal needed to be replaced. They staged a protest, preventing the principal from accessing the school, and forcing the appointment of a replacement, with whom they subsequently worked closely. By 2015, four years after the intervention by parents, the number of pupils in the school had risen to 547, up by 70% from the trough.

A further example of participatory turnaround comes from one of the initially poorly-performing Western Cape schools. Poor results in a first cycle of standardised tests shocked the school community. In response, and building on close relationships between the principal and the community, an intensive effort was made to improve outcomes, which subsequently rose significantly. This school also was the only one of the four studied in the Western Cape where principal transition successfully proceeded by the book.

Considered together, and crucially for policy purposes, the school-level case studies show that stakeholder dynamics are not fore-ordained by either the broader local context or by the strength of the education bureaucracy – individual agency by stakeholders plays a significant role in determining the relative strength of predatory and developmental actors.

Initiatives to empower developmentally-oriented school-level stakeholders are quite common globally; they have been tried with some success in low and middle-income countries as diverse as El Salvador, Ghana, Guinea, Haiti, Honduras, Pakistan and Nigeria. In South Africa, by contrast, notwithstanding the central role assigned to SGBs by the 1996 Schools Act, there have been no significant efforts to provide support to SGBs in schools serving low-income communities. Part 3 of this series explores why this has been the case – and how it might be turned around. DM

Brian Levy is Academic Director of the University of Cape Town’s Nelson Mandela School of Public Governance, and author of Working with the Grain: Integrating Governance and Growth in Development Strategies (Oxford, 2014). He is lead editor/author of the new book, The Politics and Governance of Basic Education: A Tale of Two South African Provinces (Oxford, 2018)