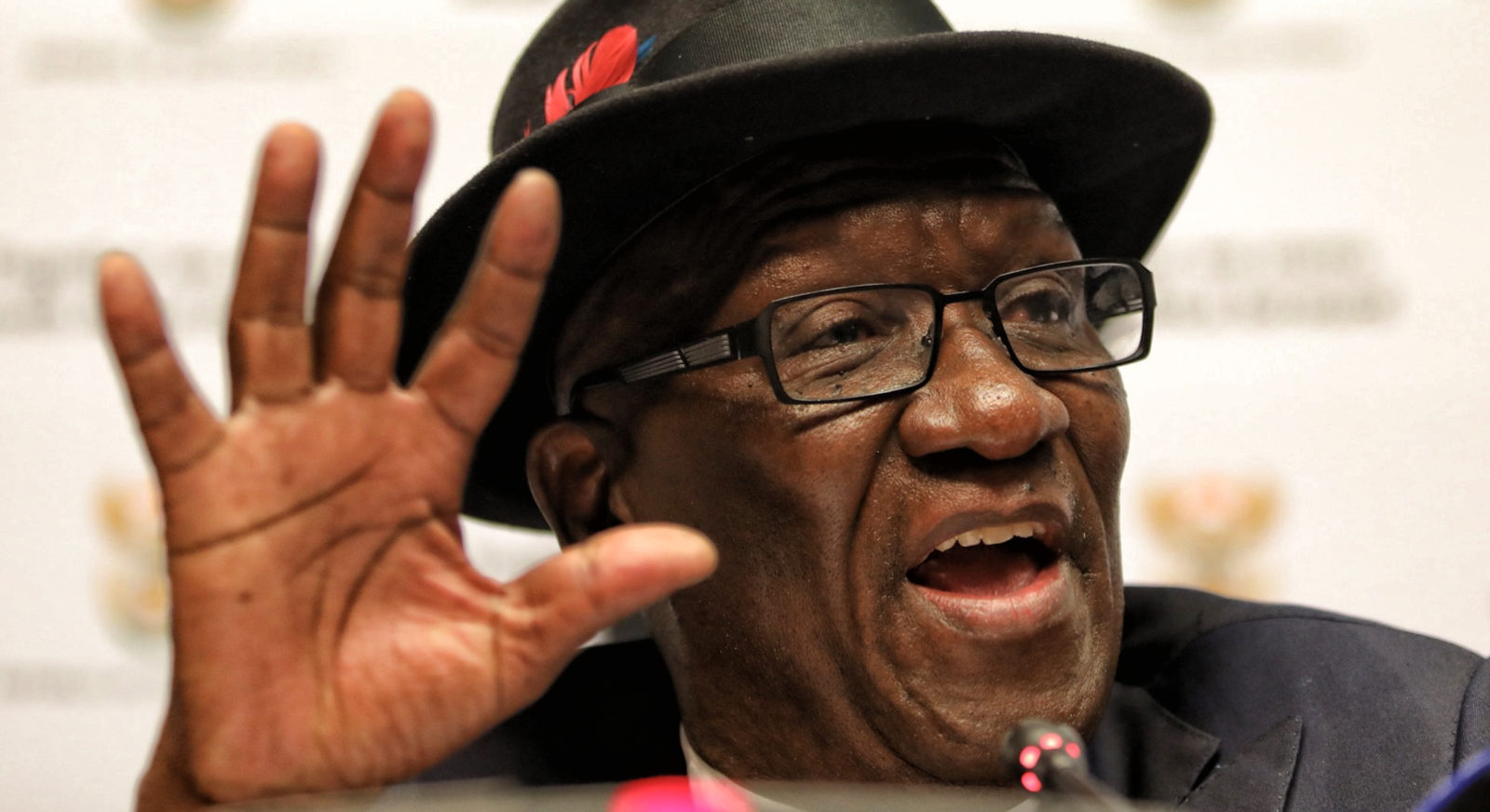 Police minister Bheki Cele addresses the media after the release of the 2017/18 crime statistics at Parliament on September 11, 2018 in Cape Town, South Africa. Photo by Gallo Images / Sowetan / Esa Alexander

The police, in an unprecedented move in democratic South Africa, did not table their annual report in Parliament when releasing the crime statistics. And that’s not just a parliamentary protocol nicety. The annual report is crucial for the bigger picture of crime statistics because it gives other information, such as on detection rates, trial-ready dockets, reaction times, recovery of stolen items and forensics capability. This week all that was missing.

Three days after Police Minister Bheki Cele briefed first MPs, then the media, about crimes statistics he said were “nothing to write home about” – 57 South Africans are killed every day was the takeaway stat from the PowerPoint presentation – the police’s annual report still had not been tabled in Parliament.

Those annual reports are the statutorily required document for accounting how a department spent its monies and reached, or not, the performance targets it has set. Tabling annual reports is part of the Budget oversight process at the national legislature where committees are meant to interrogate spending, performance and all that. The MPs’ budget review and recommendation reports can suggest improvements to departments, and are among the documents that are also received by the National Treasury.

Annual reports must be tabled in Parliament by the end of September every year. It they’re not, it’s a sign of trouble, such as at SAA which needed billions of rand in bailouts before tabling its documents for the 2016/17 financial year in February 2018, or the Passenger Rail Agency of South Africa (Prasa), which only this week filed its 2016/17 annual report with its name misspelt “Passanger Rail” on the cover page.

Right now, the absence of the SAPS annual report inclusive of crime statistics could be argued away in a technicist manner, pointing out that the end of September deadline was still two weeks away – even if it is unparalleled to have crime statistics released on PowerPoint in Parliament on Tuesday, and on a spreadsheet on the police website.

But it does mean that in the absence of the other departmental data such as detection rates, lawsuits, IT systems and more, MPs and others, such as researchers and analysts, would find it difficult to meaningfully interrogate the crime stats as part of the overall police performance. And it also makes it difficult to track matters across the criminal justice system as the SAPS annual report usually provides a second layer of statistics on, for example, trial-ready dockets and convictions to compare and contrast with what the National Prosecuting Authority (NPA) and others say.

That 2017/18 NPA annual report tabled in Parliament showed 317,475 convictions were recorded in all criminal courts: 890 in high courts, 24,976 in regional courts and 291,609 district courts. That’s an average conviction rate of 94.7%, which the NPA claims as a modest performance improvement.

It sounds good. Until a couple of pages later when it emerges that 920,911 dockets were submitted for decision. In view of the conviction rates, what happened to around 600,000 dockets? Were all those 600,000 withdrawn as not prosecutable, or maybe returned to law enforcement agencies for further investigation?

That’s not clear from the data and information presented in the 2017/18 document, although it was, in some ways, in the 2016/17 annual report of just a year earlier.

Such statistics raise serious questions about the functioning and capability of the criminal justice system. Questions also arise about how numbers and statistics are presented in annual reports.

For example, the 2017/18 NPA annual report states that with regards to docket decisions, prosecutors “excelled” as all but 260 of the 920,911 were decided.

“The rapid turn-around time on decision dockets is an indication that prosecutors are committed to high levels of service delivery to all victims of crime.”

But with only about 12% to 15% of dockets actually having been taken to the regional and district courts – and there is nothing in the official documentation to indicate a disruption of this pattern of previous years – it seems officialdom’s definition of service delivery to crime survivors includes not prosecuting.

Among the “noteworthy cases” the NPA 2017/18 annual report lists is “State v Cekeshe (#FeesMustFall Matter)”, where “the accused was convicted of public violence and malicious damage to property… This matter relates to the student protest during the #FeesMust Fall campaign. The accused burnt a SAPS vehicle thereby destroying 2 SAPS shot guns…”

Earlier in 2018, Khanya Cekeshe, who is serving an effective six-year jail term, was refused leave to appeal against his conviction and jail term. In comparison an effective four-year imprisonment, or R1-million fine, was imposed on a Chinese national caught travelling to Hong Kong with 10 rhino horn, 41 ivory bangles and 84 ivory chop sticks in his checked luggage. That case, State v Desheng Zhang, was another the NPA listed as noteworthy.

The devil is in the detail in these annual reports, and once it’s tabled in Parliament, the SAPS annual report won’t be any different. DM

PATH and SAMRC and CSIR
Save 9 mins