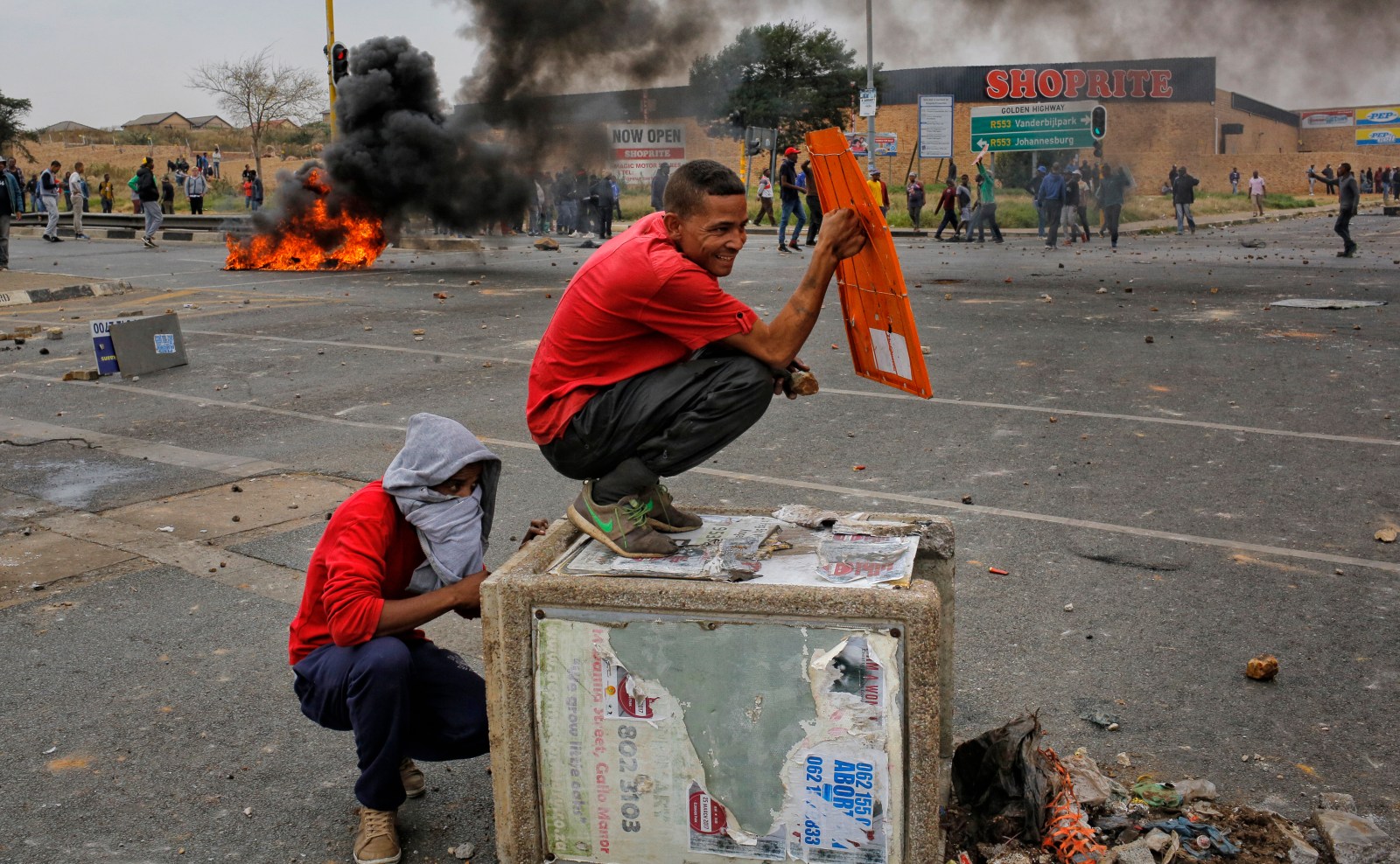 A protester shelters behind a piece of metal while he is fired at by police during a violent protest in Eldorado Park, Johannesburg, South Africa, 08 May 2017. EPA/KIM LUDBROOK

The number of bucket toilets has reduced and municipalities are providing more water, sanitation, waste removal, and electricity services, Statistics South Africa announced on Monday on releasing its Non-Financial Census of Municipalities 2017. Still, beyond the data, many questions remain about service delivery.

The Non-Financial Census of Municipalities report is a key indicator of the country’s efforts to eradicate bucket toilets, and Statistics South Africa’s deputy director-general of economic statistics Joe de Beer announced an incremental improvement on Monday.

Eradicating the demeaning and unhygienic bucket system has long been a goal for government, with aims to end the system in formal areas missed in 2006 and 2015.

The numbers of bucket toilets serviced by municipalities has reduced significantly from 231,660 in 2004 and 100,618 in 2013. But according to the current trend the government will not meet its National Development Plan (NDP) target of eradicating the system in formal areas by 2019. The data doesn’t speak to informal settlements.

In 2017, Eastern Cape municipalities managed to reduce the provision of bucket toilets by 15% and Northern Cape by 12.7%. In the Western Cape there was an increase by 11.4% (the rise was in Mossel Bay) and North West saw an increase of 4%.

Stats SA’s Non-Financial Census of Municipalities report provides an indication of service delivery over the last year, but much is lost or clouded by aggregating the figures.

According to the report the number of “consumer units”, or delivery points where bills are sent, receiving services from municipalities increased across the country in 2017. Sewerage and sanitation provision increased 3.8%, solid waste management was up by 2.6%, and water and electricity provision both increased by 2.1%.

The increase in service delivery might sound unlikely after Auditor General Kimi Makwetu recently announced that municipalities’ finances are generally disastrous, with only 33 of 257 councils receiving a clean bill of financial health. Service delivery protests are also rife.

De Beer said service delivery and municipalities’ finances should be treated separately. He claimed it’s possible for more people to be provided with services while municipalities fail to balance their books.

Speaking on protests, Stats SA’s chief director of government financial statistics Dr Patrick Naidoo said people might protest for a number of reasons unrelated to basic service delivery, such as the dependability of the services, quality, associated costs and delays in municipalities delivering on their promises.

The Non-Financial Census of Municipalities 2017 report paints a rosy picture of service delivery improvements. Limpopo municipalities’ delivery of water increased by 4.3%. Western Cape’s electricity provision grew by 3.7% and Limpopo again saw a whopping increase in the provision of sewerage and sanitation services of 15.5%.

“The overriding message that we get for all four types of service delivery provided is there is an increase in the number of consumer units that are receiving services, but we’re not in a position to comment on the quality of services provided,” said De Beer.

There’s the problem. Stats SA takes its data from municipalities but doesn’t account for the effectiveness of service delivery. De Beer said it could be beneficial to measure quality, but asked how it should be defined.

“What does delivering of a service really mean? Is it one month out of the year? Is it a service that must be available 24/7?” he asked.

If one thinks of the frequent water shortages across municipalities throughout the country, failing to monitor quality and consistency of delivery, let alone demand, largely renders the statistics on increased provision meaningless.

Apart from figures on bucket toilets, the most useful information coming out of the report relates to municipal services provided to indigent households. Municipalities are required to provide six kilolitres of water, 50 kilowatt/hour and the average R50 towards sewerage and sanitation and solid waste removal to the indigent, but what amounts to “indigent” differs between municipalities.

Where the poor benefit from free services becomes more interesting at the city level; eThekwini has over 600,000 registered indigent households and most benefit from free water and waste management, but under a third of those access free electricity.

In Johannesburg, 178,599 households are registered as indigent with over 110,000 accessing waste management services but under a quarter benefit from sewerage and sanitation provisions and only 16,954 benefited from free electricity provision in 2017.

Cape Town has 213,424 registered indigent households and according to the figures all of them benefit from their access to all free and subsidised services.

The Stats SA officials cautioned against comparing municipalities on the provision of free basic services as different municipalities set their own criteria as to who qualifies.

While the Non-Financial Census of Municipalities 2017 suggests municipalities are expanding the provision of services despite the general financial quagmire, it raises more questions about the quality of those services and what’s provided for the poor than it answers. DM