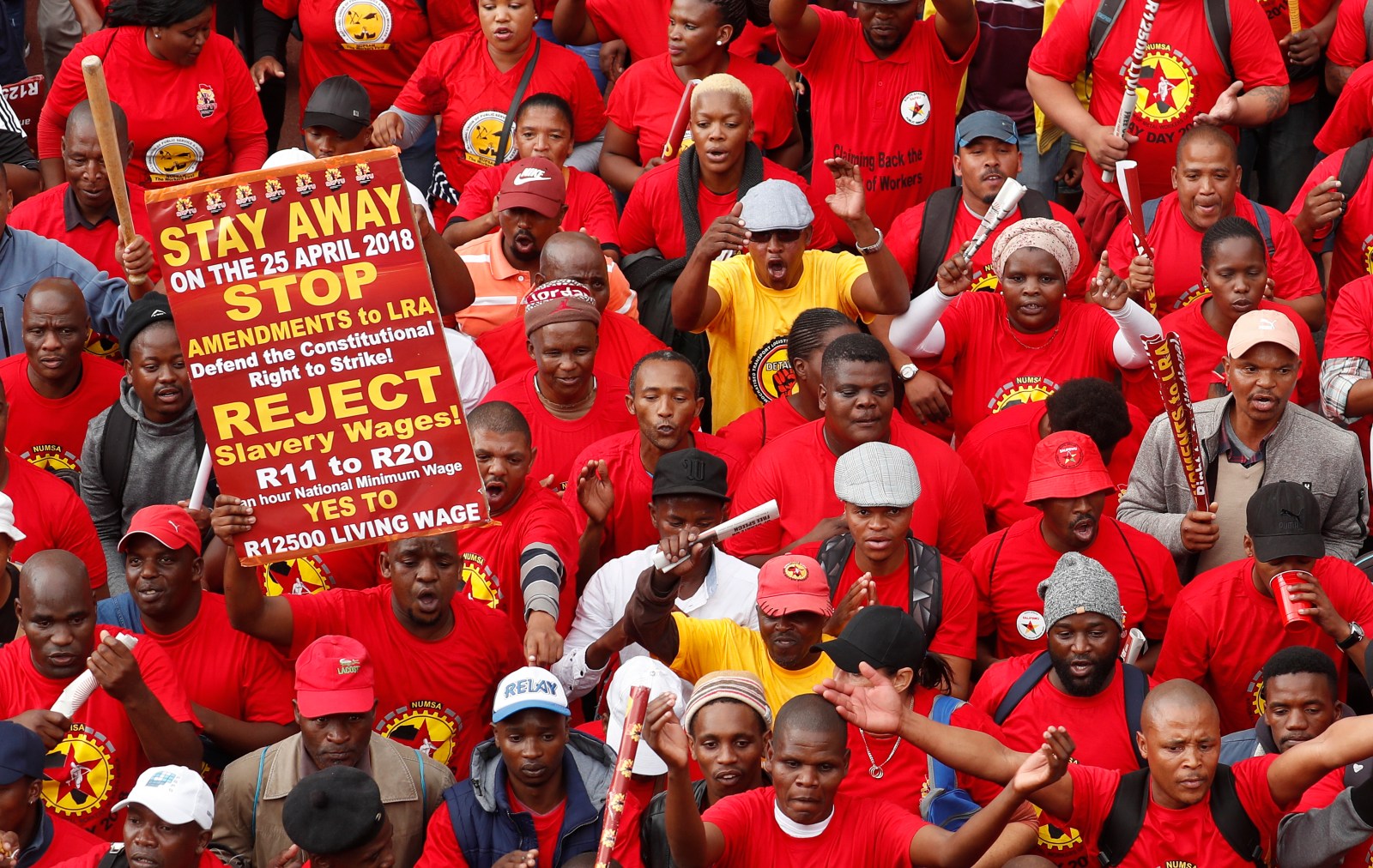 The Department of Labour has placed further hurdles in the way of a meaningful national minimum wage package, this time in the course of the parliamentary process.

Unfortunately, the Department of Labour, which played a dominant role in the redrafting process, has, in a number of instances, either ignored the letter or spirit of decisions taken by the Portfolio Committee.

This follows their selective presentation of certain issues to the Portfolio Committee. For instance, certain points raised in various submissions were left out of the summary prepared by the departmenti and others were inaccurately conveyed in the department’s verbal inputs to the committee.ii

This suggests a pursuit of particular outcomes that ignore critical concerns raised by the public and social partners, and thereby undermines the ability of the committee to conduct a balanced engagement on the bills before it.

This comes on top of the department’s sidelining of a number of aspects of the February 2017 national minimum wage Nedlac agreement between the social partners. Limited improvements made to the bills (such as increased fines for repeated offences) are outweighed by key instances were the protections that the national minimum wage seeks to provide workers have been undermined.

After enormous opposition from the department, the Portfolio Committee resolved that the NMW commission must be empowered to update existing sectoral determinations – mechanisms through which the Minister of Labour sets sector-by-sector conditions of employment and minimum wages (above the new national minimum wage) – and institute new ones. This appears in the amendments but in the weakest possible form.

The commission has limited operational authority over the secretariat despite the Parliamentary Law Adviser flagging this as concerning during the Portfolio Committee’s deliberations. This will potentially impact the commission’s autonomy to undertake research, implement complex aspects of its mandate, such as setting a medium-term target, and to independently manage its affairs, and is most concerning regarding its role in amending and adding sectoral determinations, as noted above.

This is despite all social partners and the Portfolio Committee stressing the value of independence and the international evidence overwhelmingly indicating that the most effective commissions have operational autonomy from government departments. An Achilles heel of the existing Employment Conditions Commission has been its lack of independent resources.

Both the Nedlac agreement and Portfolio Committee agree that the lower levels for domestic workers and farmworkers (R15 and R18 respectively) should fall away after two years unless research indicates otherwise. This agreement was supposed to be reflected in the amendments but does not.

As has been raised previously, the NMW Bill does not guarantee, or even promote, an annual increase. This was agreed to by the Portfolio Committee but the department’s failure to include this in the first place violates the Nedlac agreement which noted:

“It is specifically agreed that the adjustment should not lead to the erosion of the value of the NMW taking into account all of the above factors.”

The Bill only instructs the commission to “consider” as one among other factors “retaining the value of the minimum wage” rather than as a factor that should be specifically promoted subject to considering other factors.

Along with annual increases, the perceived low level of the national minimum wage was due to be offset by a strong medium-term target. This would have allowed government to argue that they were starting at R20 but have an ambitious framework to increase this. However, the medium-term target in the Bill is a damp squib.

In the Bill, the target must only be set within three years, with no mention of what benchmarks to use or when it must be implemented by – if the target is only reached three to five years after it is set, then, in the current formulation, it could take until 2026!

On this matter, the Nedlac February agreement reads:

“The NMW Commission to be established will, as part of its mandate, establish a medium-term aspirational target for the NMW and take into account appropriate benchmarks and International Labour Organization (ILO) guidelines.”

The lack of guidance given to the commission on establishing the target may lead to the sort of paralysis that characterised the national minimum wage negotiations.

The accommodation of the Expanded Public Works Programme is another element that is weaker than the Nedlac agreement (in addition to the R11 per hour being extremely low). By not including any guaranteed increase in line with the national minimum wage, the Bill ignores that the agreement stipulates that the level should be 55% of the national minimum wage, thereby implying that it should at least increase in line with it.

In what can only be a deal struck with employer organisations, the Bill includes the ability of employer organisations to apply for exemptions on behalf of their members. This does not appear in the Nedlac agreement which notes that the department should be “fully equipped to provide the necessary assistance”.

A range of organisations have opposed this provision on the basis that it risks creating a sophisticated conveyer belt of applications.iii It is worth noting that exemptions are rare internationally and already abused in South Africa.

Further, there is no framework for the exemption regulations (i.e. stipulating broadly what the minister should take into account when making regulations) as there is in Section 50 of the BCEA regarding current exemption mechanisms.

The amendments to the BCEA guarantee that workers must be paid for four hours of work even if they work less – this is an international innovation and a win for workers. However, it is marred by ignoring the Nedlac Committee of Principles agreement that the commission must investigate the feasibility of increasing the minimum number of hours from four to five, something which was captured in an earlier draft of the Bill. (Other ways in which the department has ignored either the Portfolio Committee’s deliberations or Nedlac agreement can be found here.iv)

These examples highlight that not only has the department not (within sensible limits) maximised gains for workers, but has also actively weakened (or distorted) decisions taken by both the social partners and the Portfolio Committee that would have strengthened protections. This cannot go un-noted and the department officials should be asked to account.

The national minimum wage has been promoted since 2014 as the first step in a multi-pronged strategy to reduce wage inequality. This has not found expression in this round of the process. Hopefully the President will announce the next steps in this engagement and the Labour Portfolio Committee will hold the social partners at Nedlac to account.

Parliament still has a window of opportunity to amend the bills to ensure they offer maximum protection to workers and a strong, independent and well-resourced commission to oversee this critical policy intervention. DM

i One excuse the Department has given is that the summary only includes “new” points raised that were not contained in the original submissions made to the Department by January 2017. This is not accurate as the summary does contain some issues raised in those previous submissions. The omissions were so egregious that we prepared a supplementary document that was circulated to the Portfolio Committee on the second day of deliberations.

ii Recordings are available on the website of the Parliamentary Monitoring Group and the Department’s verbal inputs can be compared to the original submissions.

iii The Department has touted their changing of Section 15(1) “on behalf of their members” to “on behalf of a member” as responding to these objections. This is disingenuous, does not address the concerns raised, and was a change suggested, during the deliberations, by the Parliamentary Law Advisor as a narrow technical correction.

iv One point worth noting here is that all timeframes for promulgation, reviews and amendments to the level have been removed and it is unclear when the NMW Commission will start operating. Some flexibility is understandable given the failure to meet the 1 May 2018 deadline but it creates a great degree of uncertainty. It is essential for predictability in this respect as changes to the national minimum wage will also impact other wages and collective bargaining in the economy. Therefore new target dates should be transparently stipulated.