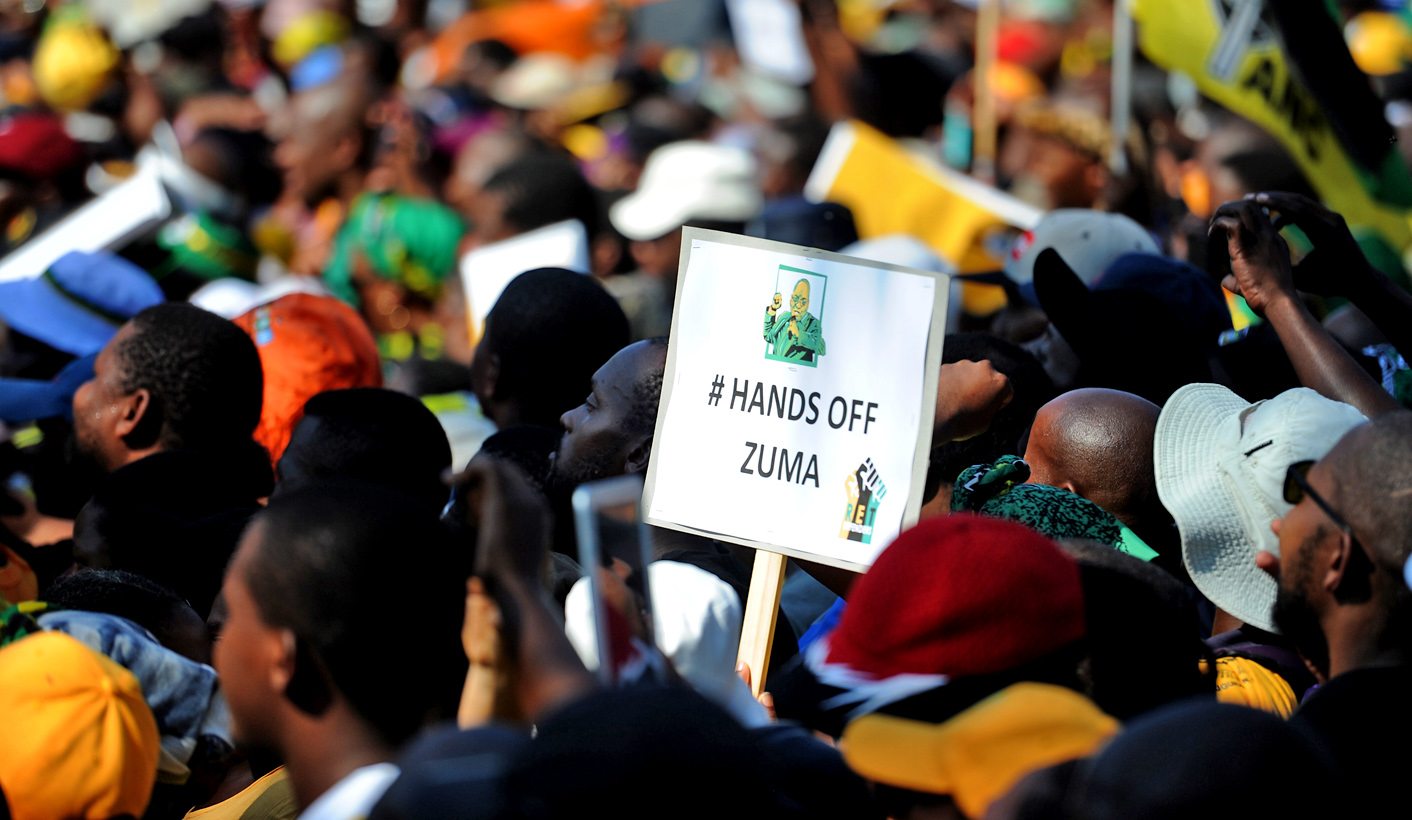 Black First Land First, the group launched by former EFF MP Andile Mngxitama in 2015, has achieved nothing to date other than a reputation for thuggery and provocation. Yet at events around Jacob Zuma’s court appearance last week, BLF suddenly took on the appearance of a real political movement – with Sunday newspapers going so far as to suggest that it might have an important role to play before the 2019 elections. Is BLF worth paying attention to? By REBECCA DAVIS.

If the events around the Durban High Court last week could be said to have a winner, it would not be former president Jacob Zuma or the National Prosecuting Authority. It would be Black First Land First (BLF).

At the demonstrations around Zuma’s first court appearance, BLF enjoyed a moment in the sun. A movement routinely scoffed at or ignored for its thuggish tactics – including trying to disrupt a Daily Maverick event in 2017 – suddenly found itself given a sheen of political legitimacy, albeit by a former leader.

BLF leader Andile Mngxitama addressed cheering crowds, at both the night vigil before Zuma’s court appearance and outside the court itself, of a size that BLF has hitherto been incapable of drawing independently. Other BLF leaders made the rounds, giving practiced sound bites to journalists.

Of course, many of the Zuma fans demonstrating their support outside court last week may not have even known in advance who BLF were. BLF T-shirts were vastly outnumbered by ANC T-shirts. But for Mngxitama’s movement, the moment was also a campaigning opportunity. BLF distributed to the crowd glossy flyers prominently featuring Mngxitama’s face, together with text explaining the movement’s stance on Zuma and economic liberation.

The endgame? Not just mobilising support for Zuma. The real target is the 2019 elections, which, the Independent Electoral Commission has confirmed, BLF is registered to contest.

The Sunday Times even suggested that BLF could become potential kingmakers in KwaZulu-Natal before the elections. The newspaper reported that Zuma-favouring ANC factions were “pondering working with Andile Mngxitama’s Black First Land First ahead of the general election as part of a plan to punish Ramaphosa for Zuma’s removal from office”.

The idea seems far-fetched, as Daily Maverick’s Stephen Grootes has argued on Monday.

“On our side we have no working relationship with the ANC,” he said, “though we wish to unite all black people.”

Zuma has seemed happy to accept the support of BLF, which formally began on 4 September 2016 with the launch of the #HandsOffZuma campaign.

The reason why BLF has defended Zuma so enthusiastically appears to owe very little to the reality of Zuma’s actual identity as man or president, and everything to do with his symbolic value. In BLF mythology, Zuma has become a kind of persecuted revolutionary.

It is a far cry from Andile Mngxitama’s performance in Parliament as an EFF MP, where he once sassily hinted in the National Assembly at Julius Malema’s intellectual superiority over Zuma:

“There is nothing that our President, Mr Jacob Zuma, can say or think that can possibly fly above the head of [Julius Malema],” Mngxitama said.

Zuma received internal criticism from the ANC for not distancing himself from BLF before stepping down as president. Outside court on Friday, he even had a special wave for the group. The reality is, however, that BLF’s actions in support of Zuma may have relatively little to do with the former president and everything to do with BLF grasping an opportunity for political mobilisation. In other words, BLF is using Zuma as much as Zuma may be using BLF.

A number of media outlets seem to have taken an informal decision in recent years to ignore BLF, as a result of their incendiary statements and threats of violence towards journalists. But BLF’s positioning in Durban last week was clever: it ensured them both media exposure and access to a much wider audience than normal.

Whether any of that sudden momentum can translate into actual votes at the ballot box in 2019, however, remains to be seen. The extent of BLF’s true support is largely unknown, though has always been believed to be minuscule – judging by the tiny numbers its past protests have produced.

Maasdorp claims, however, that audited BLF membership numbers from 2017 exceeded 100,000.

Another mysterious aspect has been BLF’s funding sources.

The #GuptaLeaks emails show that Mngxitama met with Gupta lieutenant Santosh Choubey in February 2016 to ask for money from the Guptas. In March that year, he received an email from the Gupta media team requesting him to write an article on the source of funding of the BizNews website, following the publication of a Gupta legal threat on that website. The casual tone of that email suggested that some financial agreement may by then have been reached.

But would the Guptas still be bankrolling Mngxitama’s relatively insignificant group at this highly stressful time for them? It seems unlikely. Yet in Durban last week, BLF had the air of a group with access to some financial resources, judging by its printed products and the ease with which its leaders appear to move around the country.

“We get money from sympathisers,” was all Maasdorp would say for now on the topic. “From time to time, we put out a request to see who can assist us.”

One known sympathiser is former Eskom CEO Brian Molefe, whose son Itumeleng Molefe is a close friend of BLF figures including Maasdorp. Daily Maverick reported in 2017 that BLF protesters sped off from The Gathering in Molefe’s car.

There were far more powerful figures than BLF behind last week’s Zuma demonstrations, of course. On Monday, it was reported that 20% of Durban’s buses may have been rerouted to transport Zuma supporters to the Durban High Court.

Next to that kind of muscle, BLF starts to look distinctly small fry. DM