Analysis: Helping Zuma/Hurting Ramaphosa via KZN strategy – not likely, not realistic, not doable 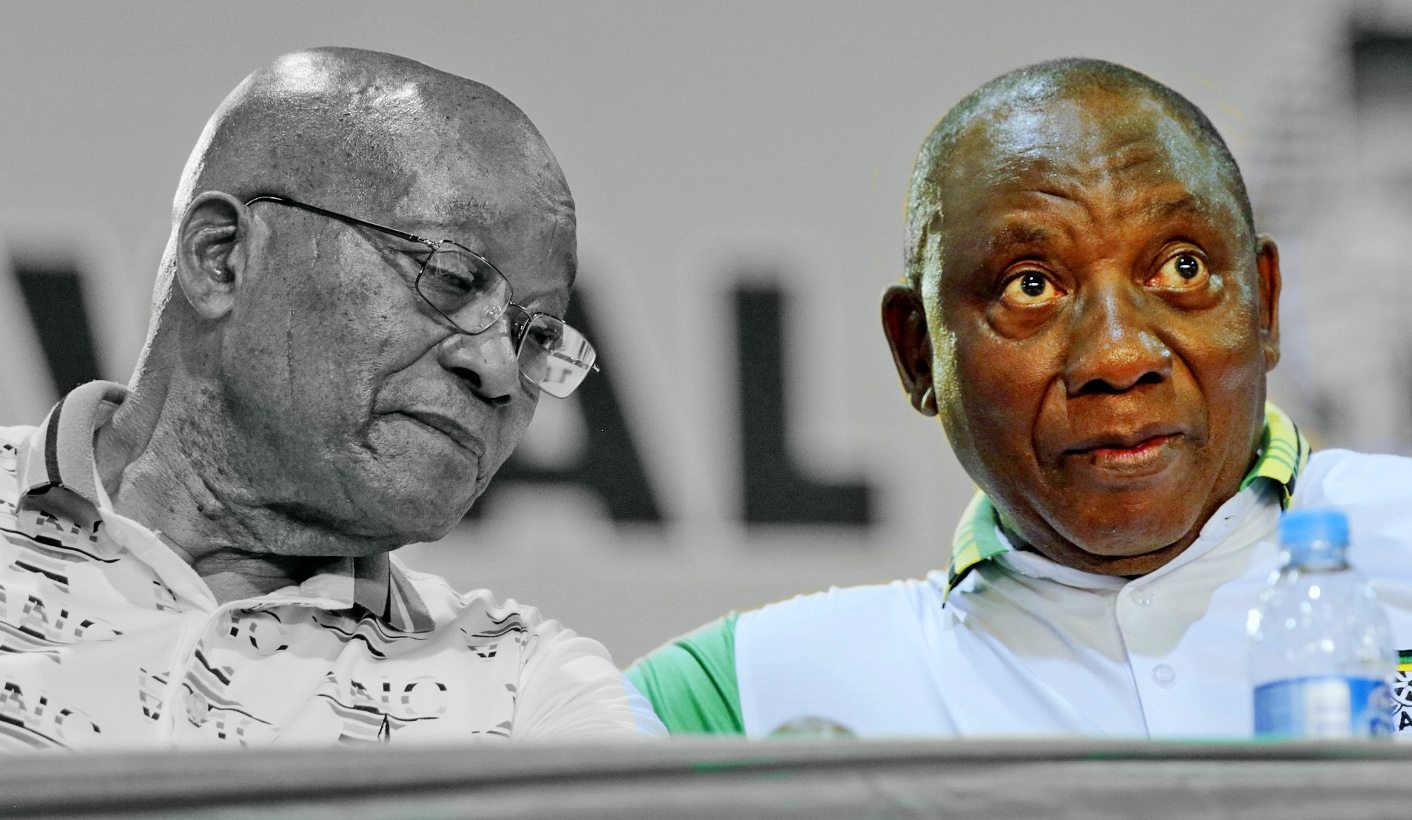 On Sunday morning the country’s bigger Sunday newspapers screamed about plots afoot to prevent former President Jacob Zuma from having to actually face his court ordeal. The Sunday Times suggested that the “Zuma rebels” would “go it alone” while City Press even managed to get the word “war” into its headline. In the real world, it is incredibly unlikely to actually be attempted, and even less likely to be successful. By STEPHEN GROOTES.

Essentially, Sunday newspaper reports explained, former president Jacob Zuma’s supporters are considering multiple plans to stop his trial, even including the removal of Cyril Ramaphosa from the leadership of the ANC. Tinged through all it is a hint, or a claim, of “ethnic mobilisation” in all of this.

Zuma was his usual self outside a courtroom on Friday, telling his supporters that he had been found innocent by Judge Chris Nicholson (he wasn’t), that he was being persecuted (really?), and that he still didn’t know what he had done wrong (a statement as nonsensical as it gets).

It was a series of claims so devoid of any relationship with the truth that the political strategy behind it appears to be clear: to claim persecution by unknown and to play the victim. When a politician faces a legal battle as difficult as the one Zuma is about to face, he is likely to use his big weapons early in the game, to try to avoid the start of the trial altogether. Once a judge is able to control the timetable, then the game really is up. Such an extra-legal approach clearly points that Zuma has very few other weapons to use – his armoury appears nearly bare.

When Zuma speaks and thousands of people listen to him, it is easy to be tricked into believing that he still wields significant political power, and can use it to somehow stop the trial. But the evidence does not point that way.

First, what happened on Friday was proof of his own claim that it is “cold outside the ANC”. While it is always difficult to count people in a crowd, it certainly seemed that they were fewer people supporting him in Durban than they were 10 years ago. Back then the seating plan for the front row of the public gallery could have been copied from the last meeting of the ANC’s national executive committee. Crucially, the secretary-general, Kgalema Motlanthe in those days, would have been there, as the face and voice of the ANC. This time around, the only people who dared to defy the sort-of-edict not to formally attend were former KZN ANC leader Sihle Zikalala and Premier Willies Mchunu.

All of this suggests that, even if the claims that the “Zuma rebels” are planning to either unseat Ramaphosa or even launch a new political party are based in any reality, their effectiveness would have been severely limited. It appears the launch-pad for this claim is a suggestion, which has been heard before, that there would be a special national general council of the ANC, which would somehow into a conference, which would then vote to remove Ramaphosa from his position. When it is put into words like that, it might look technically very easy.

But that’s far from what would have happened in reality. The political price that would have to be paid by the ANC would be simply too much to bear.

Just as a starting point, if Ramaphosa were to be deposed somehow, that would surely mean David Mabuza would be the acting unless there is some candidate who magically arrives out of thin air and comes with such broad-based support that they are able to be elected to the post. And if such a person does exist, why didn’t they ascend to the leadership at Nasrec?

Mabuza has shown that he is hostile to the pro-Zuma lobby, first by helping Ramaphosa to remove Zuma from the presidency, and then with his public criticism of Secretary-General Ace Magashule. In any case, the end result of any vote to remove Ramaphosa at any point would have been the irrevocable splitting of the ANC.

Then there is the idea that Zuma supporters in KZN would vote for the ANC in the provincial elections in 2019, but for someone else in the national elections, thus hurting the ANC’s national percentages. This is surely only the politics of spite. It cannot be at all and fails to achieve what is supposed to be the real aim – to protect Zuma. Any weakening of the ANC should almost automatically result in in power and influence for the opposition parties. And the main opposition parties are much more likely to be keen on a Zuma prosecution than even Ramaphosa. The only aim here could be to somehow “punish” Ramaphosa.

It is also entirely possible that Zuma’s efforts to remain out of jail are also being hijacked by others. He must know that having Andile Mnxgitama standing next to him on a stage is not like having Motlanthe by your side, or even Julius Malema. Mnxgitama has shown that he is a rent-a-politician available to the highest bidder, and Zuma shouldn’t necessarily trust him properly either. The see-sawing Mnxgitama may be now claiming to strongly support Zuma, but that could change at a drop of a hat.

It should also be remembered that despite the shouting and threats of protests (including outside this writers’ home) there is very little evidence that the Black First Land First movement is capable of even moderate-scale mobilisation. To put this in context, there appear to have been no events at which the BLF has been able to amass even a few hundred people. The EFF, which has only 6.35% of the national vote, has been able to get around 28,000 to one event shortly after they were established (the estimate is based on the incredible reportage by Richard Poplak in 2014). All evidence available points to the BLF being only really -a--crowd with a few like-minded individuals, a political force that can only dream about any impact.

Then there is the suggestion that people like Zulu King Goodwill Zwelithini will somehow play a political role in all of the plans to save Zuma. Zwelithini has appeared to avoid any kind of explicit political role so far, despite all of what has happened around the country that often has roots in KwaZulu-Natal. It should also not be forgotten that he played no role when Zuma was being forced to resign (despite a curiously timed meeting between the two men at the time and that it may not be in his own long-term interests to become more active.

But perhaps more important than that is the fact that identities in this country are made up of multiple elements. Even if Zwelithini were to get very involved in politics, it would not necessarily follow that there would be a big impact.

Even if all of these grand and wild ideas somehow approach political reality, with the EFF still attempting to create enemies out of everybody, and the DA appearing to have a tough time, the ANC under Ramaphosa would probably sail through all of that anyway.

In other words, none of these big plans would really matter at all.

It is by now accepted by millions of voters that Zuma is not someone who can be trusted; a brief look at the ANC’s electoral success on his watch could be an indicator of that. When he makes the kinds of claims that he has been making, it is important to have a large supply of salt handy.

All of this means that Ramaphosa himself may not be feeling much pressure at this stage. In so many ways, his strategy at the moment appears to be to do very little. And in the he can simply watch the legal processes around both Zuma and people like Magashule unfold.

And finally, what many in the political world fail to acknowledge are the simple truths available in South Africa right now:

Ramaphosa is the man in the Union Buildings.

Zuma is the man in the dock. DM