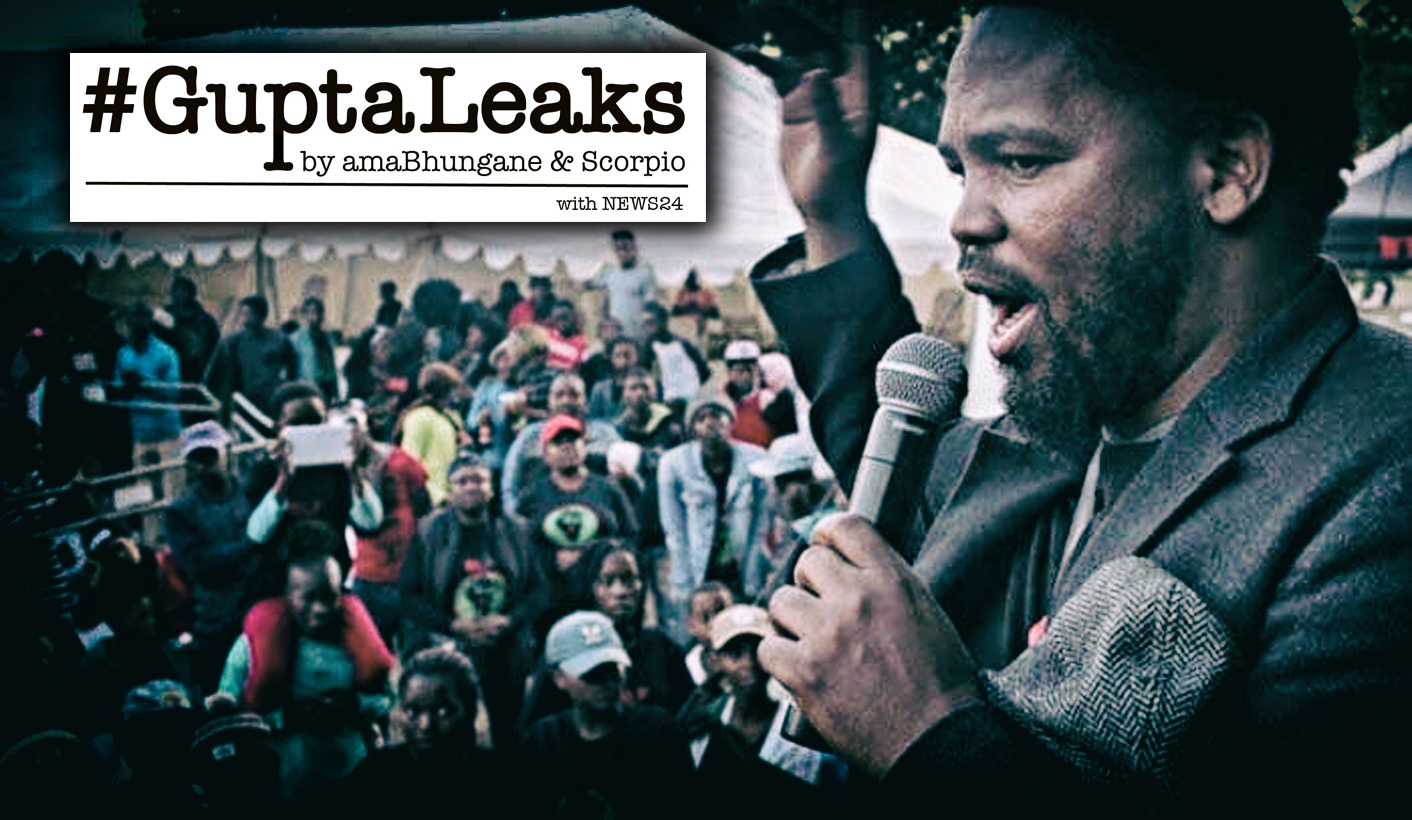 Black First Land First leader Andile Mngxitama did not only meet with the Guptas, he also received an instruction to write an article about BizNews editor Alec Hogg on their behalf. By NEWS24.

The #GuptaLeaks show that Black First Land First leader Andile Mngxitama met with Gupta lieutenant Santosh Choubey in February 2016 and that he asked the family for funding around the same time.

Mngxitama has denied receiving any money from the Guptas despite aggressively defending them.

A new email has been discovered that suggests Mngxitama did more than just meet the Guptas; that he actually received instructions from the family and that his “free” voice may, at least once, have been steered by London PR firm Bell Pottinger and the Guptas.

In the trove of emails that form part of the leaks there is an email address, [email protected], which is also known as “media profile”. The address seems to be a shared account where Bell Pottinger, the Guptas and staff including Choubey discussed their media campaigns.

It was from this email account that Mngxitama was sent a message on 11 March 2016.

The email was titled “Peter Bruce!” and it included an attachment of an opinion article written by Bruce, the Tiso Blackstar editor-at-large. The opinion piece was based on a legal letter the Guptas had sent to Hogg. Hogg published the letter sent to him by London-based reputation and privacy consultancy Schillings on his online site.

Bruce weighed in on what was seemingly a legal letter from Schillings, saying it showed the Guptas were anxious, but their move was sure to backfire because Hogg was no pushover, businessmen would help fund a defamation claim for Hogg and “it will intensify efforts to prove Gupta/Zuma links the London lawyers say don’t exist”. He also said a trial would open opportunities to discover what the Guptas had been up to.

In the body of the email, the author of “team media” asks Mngxitama, “Pls see, and the part where he writes about Alex (sic) Hogg funders, can you write on this something and send some questions to him, for source of funding, legal/illegal, who are the funders. Thanks.”

The email appears to be an instruction to Mngxitama to write about Hogg and to send him questions.

Hogg and Bruce are among a list of journalists that Mngxitama has openly stated he is gunning for as “white racists”.

When called, Mngxitama told us he did not know what we were talking about and asked that he be emailed queries, which he has not yet responded to.

The #GuptaLeaks show that New Age journalists followed up on Bruce’s opinion piece by sending him and Hogg questions about Biznews’ funding.

Further emails to and from the “media profile” address give more insight into how Bell Pottinger and the Guptas were attempting to change the national narrative.

One of these was the PR firm writing “opinion pieces” and then publishing them, giving them bylines of people who either did not exist or in no way had anything to do with the writing of the piece.

On the same day Mngxitama was sent instructions on what to write, Choubey sent former Oakbay executive Nazeem Howa and other TNA staff an article titled “South Africa must break economic apartheid”. The article was earlier sent to Choubey by Bell Pottinger employee Philip Peck in order to support the angle that the group was under attack for supporting black business.

In response to Choubey asking for space in the New Age, Howa responded that it “needs to go under someone’s name as an opinion piece”.

The article appears to have been published a few days later under the byline “John Britain”.

An email from Bell Pottinger’s Peck further indicates the extent to which the firm was involved in managing fake Twitter accounts which were pushing a “white monopoly capital” agenda. In his recent apology about work done for the Guptas, Bell Pottinger chief executive James Henderson said: “There has been a social media campaign that highlights the issue of economic emancipation in a way that we, having now seen it, consider to be inappropriate and offensive.”

On 11 February 2016 Peck emailed the “media profile” address to give feedback on his review of the Twitter accounts and websites of “sympathisers”.

The email said they had “reviewed the Twitter accounts and website of your sympathisers provided (from an objective / neutral point of view) and have the following observations:

“Based on these facts we believe that as long as these are not linked to you in any way or that you are not influencing the editorial agenda then just let them continue. Otherwise they should stop immediately.”

The email address was also used to send information to another company Oakbay hired to work in tandem with Bell Pottinger: Schillings.

Bell Pottinger’s Victoria Geoghegan, who had since been fired by Henderson, appears to have put the Guptas in touch with Schillings, sending Choubey a client care letter and standard terms of reference for an initial fee of £75,000, followed by two payments of £25,000.

The Schillings agreement, which is included in the emails, indicates that the law firm had been hired to send legal letters to media houses with the intention of preventing them from writing negative articles on the Guptas.

The objectives of their work were listed as:

Their strategy was specifically framed around a successful legal complaint against a media house.

“As part of this strategy, we have discussed focusing our legal complaints on the Sunday Times and the Mail & Guardian, as they are the most prolific offenders. In addition, a successful legal complaint against one or both of them will send a strong message to other South African media outlets,” Schillings wrote.

The emails show that legal letters were sent to the newspapers. Another one was sent to Hogg, which he wrote about, leading to Bruce’s column.

After Hogg published the letter, Howa sent an email to the “media profile” email account, saying “Alex Hogg has decided to publish the Schillings letter. In one way, it is good that it gets broader audience, on the other hand he has called our bluff. Let’s decide next step today.”

Atul Gupta responded to the email – indicating he too had access to the media profile email address – saying they must “handle him with full focus ASAP”.

“We certainly need to make an example of him,” Bass responded.

In another email sent from the “media profile” address to Bass and Howa, there is a further instruction: “Brief to Schillings should be on the lines of Go for The Kill”, referring to Hogg.

Asked for comment on their role in defending the Guptas, Schillings responded in two letters, putting us “on notice” if we published a story. DM