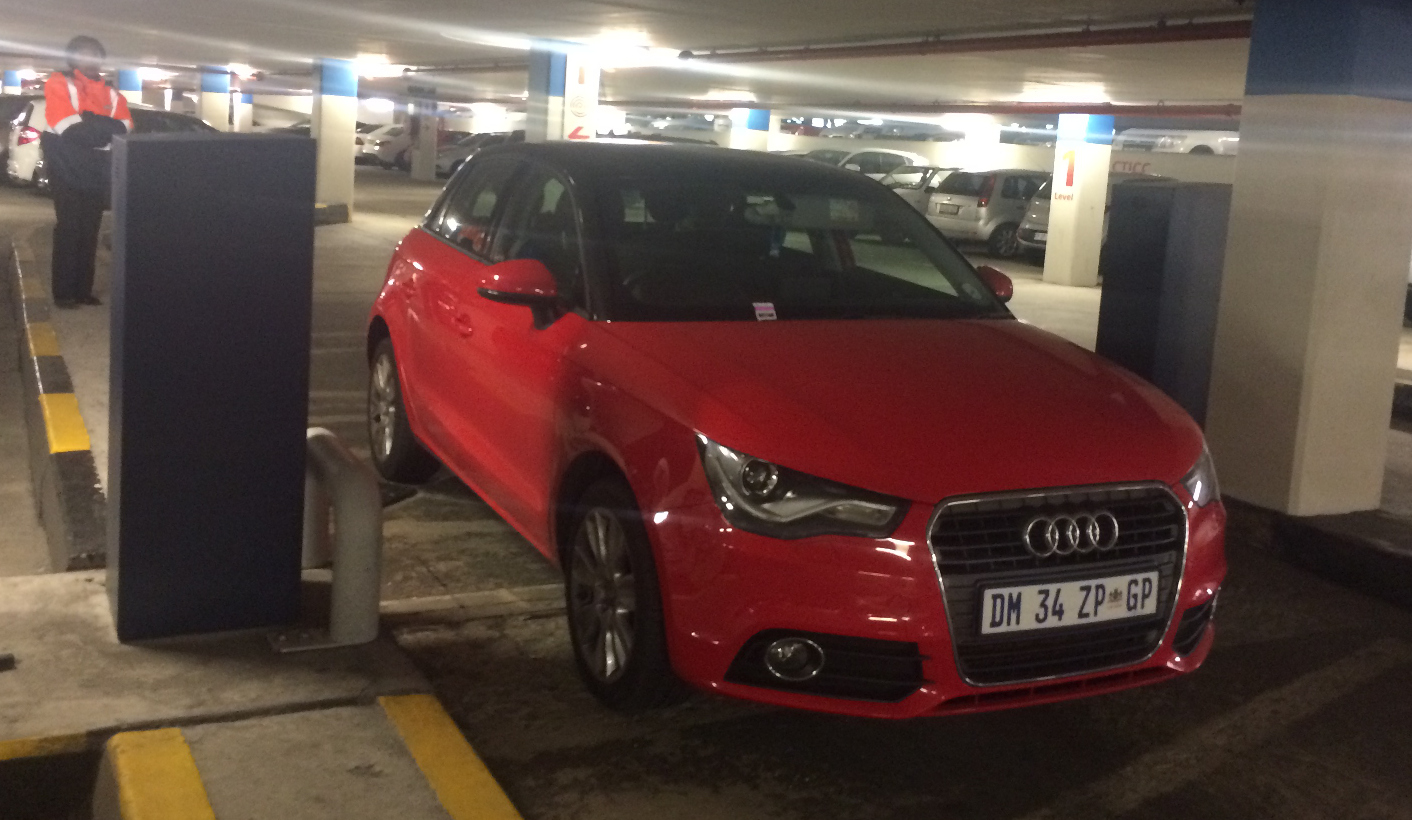 Driving in a flashy red Audi owned by ousted Eskom CEO Brian Molefe, five members of the Gupta beholden Black Land First (BLF) rocked up at the Daily Maverick’s The Gathering: Media Edition on Thursday morning. “F*ck off, you motherf*cking white b*tch,” said the “broke” Andile Mngxitama when Scorpio asked questions about the car and who paid BLF’s air fare. So the motherf*cking white b*tch poked around. This is what she found. BY PAULI VAN WYK

The red Audi seems to have been gifted by Brian Molefe to his son Itumeleng Molefe, a student at the University of Cape Town. Itumeleng is a longstanding friend of Lindsay Maasdorp and BLF leader Andile Mngxitama – he was also one of the students arrested in February 2016 during the Fees Must Fall protests. Maasdorp confirmed that Itumeleng lent the car to BLF. “I’m his friend. Yes, he borrowed me the car. So go now, write your bullsh*t story and f*ck off,” Maasdorp said.

“Why are you taking photos,” one of the men shouted to journalists at the time.

Maasdorp and Mngxitama are cut from the same cloth when it comes to using profanities when the questions get uncomfortable.

Mngxitama has defended ever more vigorously the “rights” of the beleaguered Gupta family since the #GuptaLeaks were revealed in the media.

He has relentlessly denied receiving any money from the Guptas, even after an email suggested Mngxitama had met with the family and had taken instructions from them [link].

During a telephone conversation starting at 12:49 on Thursday afternoon, Mngxitama asked why Scorpio phoned him when he wasn’t allowed to enter The Gathering: Media Edition.

When Scorpio mentioned that it might be problematic if the Guptas paid for their air and vehicle, Mngxitama exploded.

Scorpio has no proof that the Guptas paid for BLF’s airfare, nor the vehicle. Mngxitama didn’t confirm, nor deny the statement put to him. But three different and unconnected sources confirmed that the red Audi belongs to ousted Eskom CEO Brian Molefe. Scorpio has seen documentary evidence to this effect provided by two of our sources. Neither Brian nor his son Itumeleng answered their phones or reacted to messages.

“You are writing lies about us, you are targeting us because we are black. Now f*ck off, you motherf*cking white b*tch,” Mngxitama yelled before disconnecting the phone line after becoming hoarse from shouting.

In July BLF disrupted an event held in Braamfontein, Johannesburg, to the point that the event had to be stopped for fear of their violent . DM