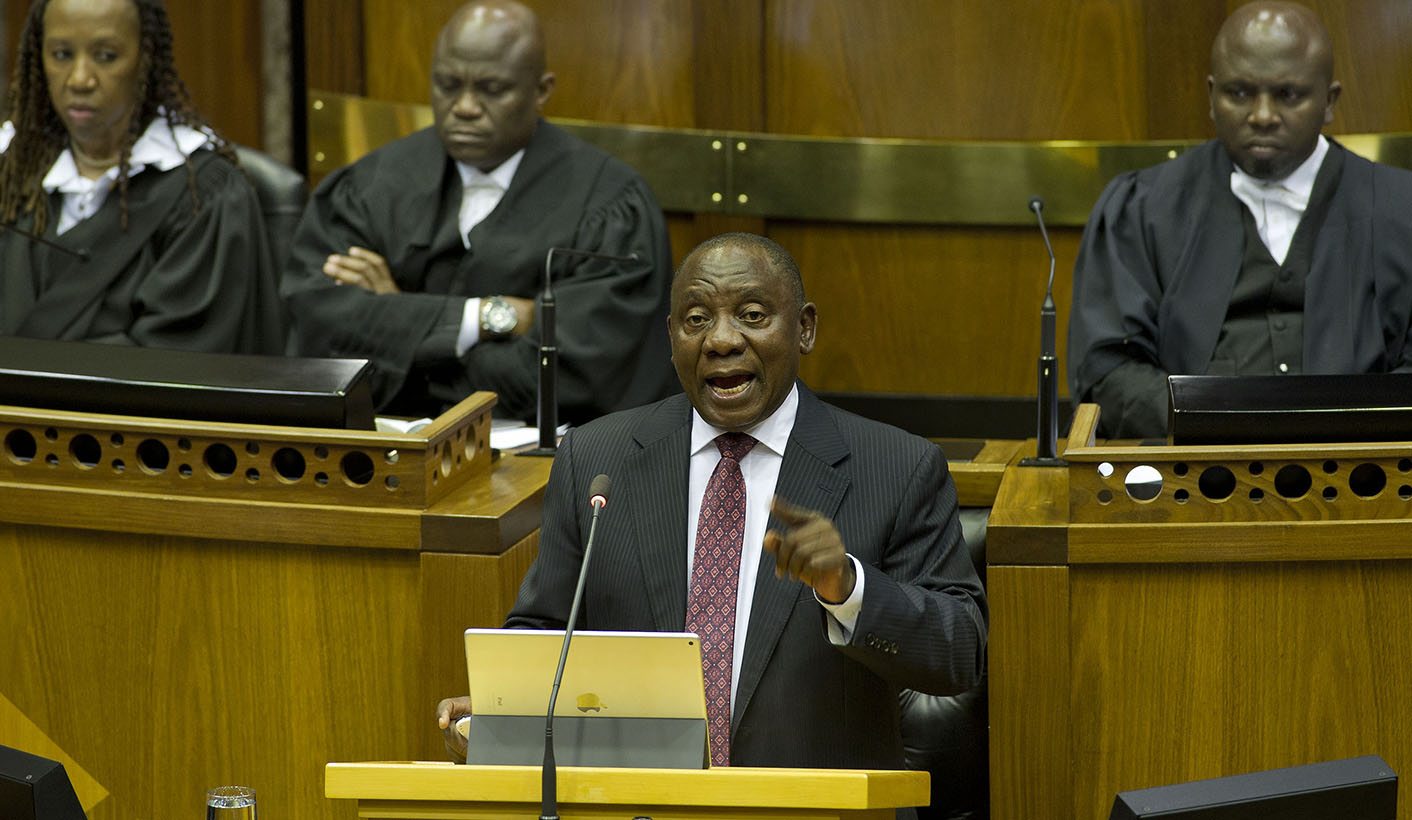 South Africa’s “original sin” of black land dispossession would be redressed with land expropriation without compensation as part of the “collective action” required to unite the country, but without damaging the economy, agricultural production or food security. This was President Cyril Ramaphosa at his negotiating best: a nod to everyone’s concerns, a call for solution-focused unity of purpose and, ever so subtly, an ultimatum. His response on Tuesday to the parliamentary debate on the State of the Nation Address was a wake-up call for the opposition to up their politicking. By MARIANNE MERTEN.

It’s difficult to argue with a president who acknowledges anxieties, including those by some opposition parties that white young South Africans are discriminated against, but then hauls out the statistics to show why such views are just plain wrong.

It’s less clear-cut on land. Government’s own land audit has been in the making for years – the 2009 Polokwane ANC national conference resolved on such an inventory – and remains unfinished. But it’s a non-negotiable. The pain and hurt caused to generations of black South Africans remained and needed to be resolved, said Ramaphosa in his reply to the parliamentary debate on his Friday maiden State of the Nation Address (SONA).

“The return of the land to the people from whom it was taken speaks to precisely how we can heal the divisions of the past… There are few in our country who would contest the fact that dispossession of black South Africans of their land contributed fundamentally to the impoverishment and disempowerment of the majority of our people.”

As part of this national process there needed to be an interrogation of statements proffered by some in the opposition during the SONA parliamentary debate, that land expropriation without compensation was incompatible with a growing economy or that it violated the spirit of the Constitution.

Situating land expropriation without compensation within the preamble of South Africa’s supreme law – the Constitution talks of the need to “heal divisions of the past” and “lay the foundations for a democratic and open society” – is a pre-emptive tactical manoeuvre in the looming politicking by opposition parties, but also vis-a-vis his own ANC.

There is ambivalence within the ANC about land expropriation without compensation. It was the most hotly debated issue at its December national conference, which adopted a resolution which, crucially, qualified that such expropriation should not threaten agricultural production and food security, and a series of consultations.

Land expropriation without compensation with the caveats that it would not undermine agricultural production or food security is not the type of expropriation pushed by the ANC’s radical economic transformation faction. Nor is it the type of expropriation without compensation policy espoused by the EFF. That it is now firmly on the table has the potential to crack the united opposition front forged in recent years over no-confidence motions against then president Jacob Zuma and to try to bat off the ANC’s reliance on its numerical dominance to get its way in Parliament.

Monday’s SONA parliamentary debate showed it has vexed opposition parties like the DA, Freedom Front Plus and Cope.

If Ramaphosa has shown anything since being sworn in as democratic South Africa’s fifth president last Thursday it is that he is folksy and approachable. And so a chance meeting during Tuesday’s early morning walk from Gugulethu to Athlone on the Cape Flats with 73-year-old Cedric Alberts, who was forcibly removed from District Six in 1969 when his family home was bulldozed and since then has had to rent his home, made it into his SONA debate reply later the same day.

“Should we say to Mr Cedrick Alberts, forget it?” said Ramaphosa. “His dignity was razed to the ground. His family story illustrates in vivid terms the pain and damage caused by the previous rulers.”

It was people like Alberts, and those who still lived in shacks or those “whose taps run dry whether there is a drought or not”, that were central to the much talked-about new dawn and renewal.

“The most important people in this country are not those who walk the red carpet in Parliament, but those who spend their nights on the benches outside its gates,” said Ramaphosa, possibly aware of the two communities of homeless people sleeping rough on the pavement outside the fence of Parliament, until they were moved come SONA.

In this context Ramaphosa moved to tackle the prickly issue of the August 2012 Marikana killings, when police shot dead 34 striking miners at Lonmin, where Ramaphosa was a non-executive director.

“I am determined to play whatever role I can play in the process of healing and atonement.”

While the president did not expressly mention the EFF on this point, his comments were a direct response to EFF Chief Whip Floyd Shivambu’s debate comments:

“Please go to Marikana. You do not need a court order to compensate the families of Marikana.”

Describing the Marikana killings as “the darkest moment in the life of our young democracy”, Ramaphosa on Tuesday added that the deaths of over 140 Life Esidimeni mentally ill patients was “an instance of the most appalling dereliction by the state of its duty to the people”. It should not happen again.

The promise of a new dawn, renewal and building national unity through collaboration and partnerships remained a feature of Ramaphosa’s public comments on Tuesday. It’s a distinctive shift from the previous administration. But some things don’t change much.

Tuesday’s presidential reply to the SONA parliamentary debate preceded a “cocktail dinner” hosted by Ramaphosa for Zuma and, as Daily Maverick has been told, with Cabinet and deputy ministers in attendance at the presidential Tuynhuys offices at Parliament.

And the traditional golf day remains a fixture on the presidential diary, scheduled for Thursday when business representatives and government politicians and officials mingle on the greens. Monies raised go to the Cyril Ramaphosa Foundation – until 2015 known as the Shanduka Foundation – to be distributed to deserving charities, according to a statement by the presidency.

Then it’s on to “a fundraising thing”, as Ramaphosa described it on eNCA, and over the following days, more meetings.

Amid all this, since Friday’s SONA, speculation remained rife about a Cabinet reshuffle. Opposition parties during Monday’s SONA debate repeatedly called for the sacking of those liked to State Capture – from public enterprises, mineral resources, public service and administration and co-operative governance – while approving of what was taken as an announcement on an imminent reconfiguration of government departments and ministries.

Ramaphosa poured cold water on speculation of a smaller Cabinet being announced as part of a looming reshuffle.

“Changes of this nature need to be well considered, they should be evidence based and should not be made in haste. This review, which we expect to take several months, will be based on a thorough analysis of the suitability and cost of the existing configuration.”

Instead,Ramaphosa spoke up for the usual State Capture suspects amid his Cabinet, “Whatever the views anyone may have, this does not justify the type of character assassination and insults that have been hurled at members of the executive,” and he asserted his prerogative to appoint ministers and their deputies.

“An announcement will be made by the president at the appropriate time. So don’t go ahead of yourself,” Ramaphosa said in reference to opposition comments.

Photo: President Cyril Ramaphosa replies to the debate on the State of the Nation Address in Parliament, 20 February 2018. Photo: GCIS