SONA 2018: President Ramaphosa promises to turn the tide of corruption 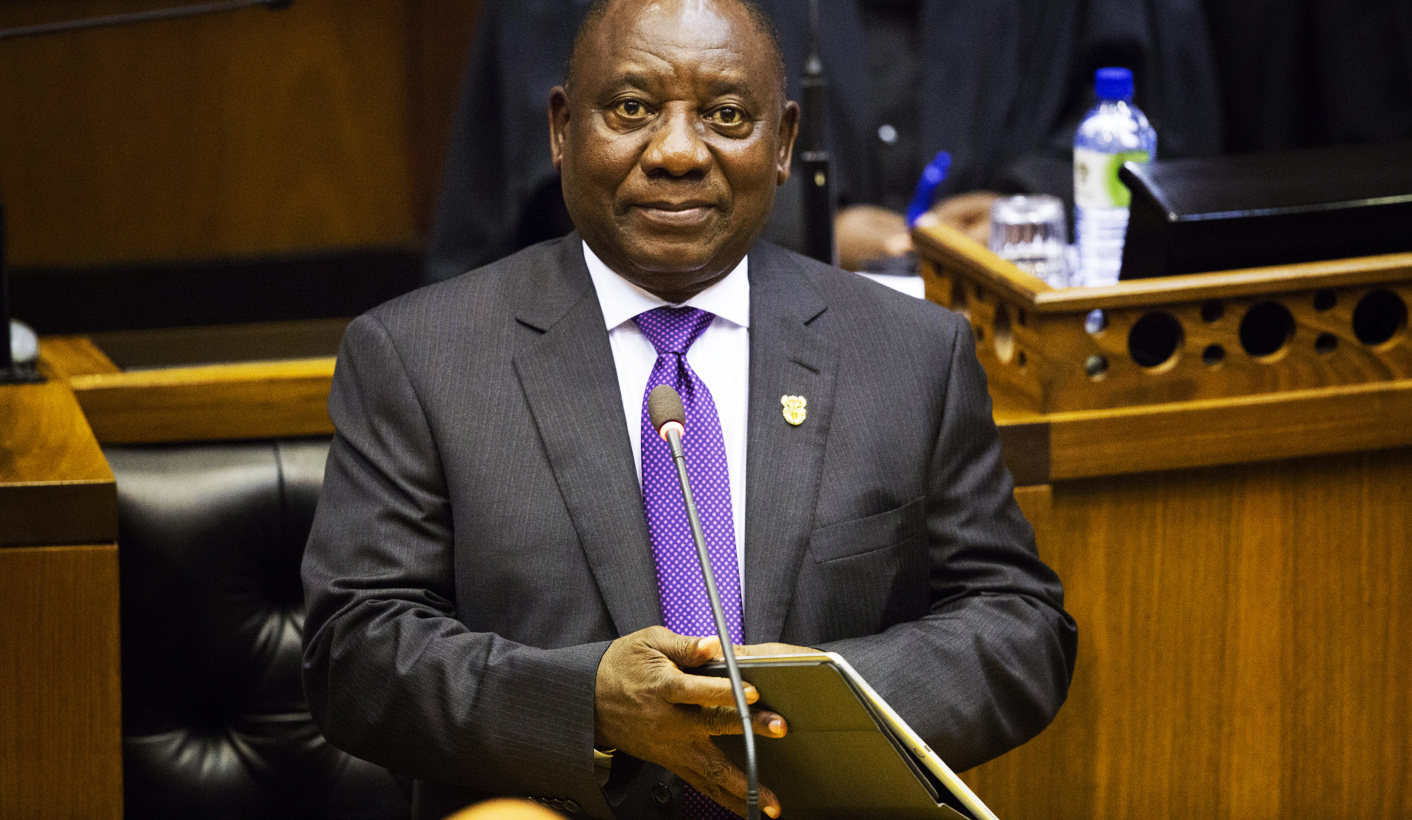 It was always going to be a tricky mix of manoeuvring in a tight national and party-political space, showing government’s commitment to repair public trust while tackling socio-economic challenges and hitting the right tone. And so when President Cyril Ramaphosa stepped up to the podium in Parliament to deliver his maiden State of the Nation Address on Friday evening, there was the promise to “turn the tide of corruption in our public institutions”, a sharp focus on the economy and youth amid an emphasis on South Africa’s unity in diversity. It was welcomed, but not without qualifications. By MARIANNE MERTEN.

The tone was right for the moment. “We are determined to build a society defined by decency and integrity that does not tolerate the plunder of public resources, nor the theft by corporate criminals of the hard-earned savings of ordinary people.”

But the details were largely absent. With three concrete exceptions:

Ramaphosa, who as deputy president faced MPs questions in the House every two weeks for the past four years, has a way with words. It sounds like there’s a concrete announcement, but actually isn’t. To wit, his SONA2018 comments on “initiating a process to review the configuration, number and size of national government departments”. But many in the opposition took that to mean an actual reduction of Cabinet, which in the Zuma administration ballooned to 37 – 10 more than when he started his first term in 2009.

Then there were announcements of working groups on the economy and youth and a digital industrial revolution commission, a national jobs summit, an investment conference within three months and a social sector summit.

EFF leader Julius Malema may have welcomed the announcement on land redistribution without compensation – a longstanding EFF policy – but criticised the presidential address for having presented “just a list of conferences and seminars”; he described Ramaphosa as “a man looking for solutions” without necessarily having them.

He wasn’t the only one.

United Democratic Movement (UDM) leader Bantu Holomisa said while Ramaphosa’s SONA had raised the hopes of South Africans, “I hope he will not fall in some of the traps his predecessors have – empty promises and implementation. Will his administration match his intentions?”

DA Chief Whip John Steenhuisen pointed out that “there are a lot of commissions… We will watch and hold him accountable”, as DA leader Mmusi Maimane pledged “support in building one nation with one future which is in the interest of all”, while pointing out Ramaphosa had fallen short of “a clean break from the Zuma era”.

Freedom Front Plus leader Pieter Groenewald cautiously welcomed a new direction: “Nice words, but when it comes to implementation it’s another matter.”

For the ANC, SONA2018 must have been a huge relief after its internal upheavals over former President Jacob Zuma’s departure from the Union Buildings took the governing party to the brink of having to join a motion of no confidence in the National Assembly to ensure that the decision to recall its former President Jacob Zuma by its highest decision-making body between national conferences, the National Executive Committee (NEC), was implemented.

ANC National Chairperson Gwede Mantashe said Ramaphosa could step in and deliver SONA because of the work and preparations by the ANC. He later told Daily Maverick: “I am relatively happy. Yebo, we will work hard.”

That it’s not all Kumbaya under the Ramaphosa presidency of both party and state emerged from ANC Deputy Secretary-General Jessie Duarte, who still referred to “President Zuma”. Ramaphosa’s bridge-building message of a South Africa “bound together by a common destiny” appeared not to have quite hit home. “We don’t side with the opposition in this country. Our aspirations are not the same,” said Duarte afterwards in reference to the fact that it had almost come to the ANC having to put its own stamp, through an amendment, on an opposition EFF no confidence motion in Zuma. But politics moves on. “We are starting the work of our elections,” said Duarte, adding that an announcement on volunteers would follow within weeks.

But there was a clear shift at SONA2018 amid Ramaphosa’s references to seizing “the moment of hope and renewal”, of “history”. There was a lightness and dignity not seen in years, never mind the violent removal of EFF parliamentarians and the ham-fisted security measures like signal jammers and rolls of barbed wire seen in the previous three years.

The EFF sat through the presidential address. “We are people of peace. We were opposed to the constitutional delinquent (Zuma),” Malema said afterwards.

Chief Justice Mogoeng Mogoeng, leading the country’s top judges into the National Assembly, received a standing ovation, a day after he had presided over the election of Ramaphosa with sharp wit and humour. He read out Zuma’s resignation letter that the EFF had earlier asked Speaker Baleka Mbete to read – she had done so in 2008 when then President Thabo Mbeki resigned. The EFF walked out of Parliament when Mbete declined their request.

There were chuckles by both Ramaphosa and Malema when “Honourable Malema” popped into the traditional list of acknowledgement of dignitaries, including this time both Mbeki and FW de Klerk, who served as Nelson Mandela’s deputies in South Africa’s post-1994 Government of National Unity.

Some nine hours before his maiden SONA, Ramaphosa did a walk through the National Assembly. It was discovered that the autocue did not work. There was a presidential shrug – no problem, we’ll make a plan. And so Ramaphosa read, and talked, his SONA from a tablet. Instead of Shakespeare, there were the words of the late jazz maestro Hugh Masekela.

Security was tight, if somewhat less visible, and Daily Maverick is reliably informed the so-called bouncers, who have been at the forefront of EFF forced removals from the House, and members of the public order police were outside the chambers, on standby in the event of trouble inside. They were not needed.

But there was that moment when Ramaphosa pledged a committed fight against corruption, when the EFF benches burst out in “Aaaaace, Aaaaace”, the rolling call out associated with Ace Magashule, ANC Secretary-General and Free State premier. The Hawks this week brought several people to court over the Vrede farm project that siphoned state money to the lavish 2013 Gupta wedding.

Outside the National Assembly, Magashule dismissed that moment, questioning why as Free State premier he should be linked to a project run by the provincial agriculture department:

“Allegations remain allegations, the law has to run its course.”

ANC MPs greeted Ramaphosa with “Ixesha lisondele” (loosely translated as “the time has come to rise”) and a standing ovation, while even the opposition benches stood up, in stark contrast to previous years. ANC MPs left the National Assembly singing the song.

SONA2018 underscored the change in political optics and tone that came to the fore earlier this week when Ramaphosa was elected and sworn in as president of South Africa. Whether the substance changes, and at what pace, remains to be seen.

The first test comes on Monday when opposition parties reply in the debate of Ramaphosa’s SONA, and then in Wednesday’s Budget. DM