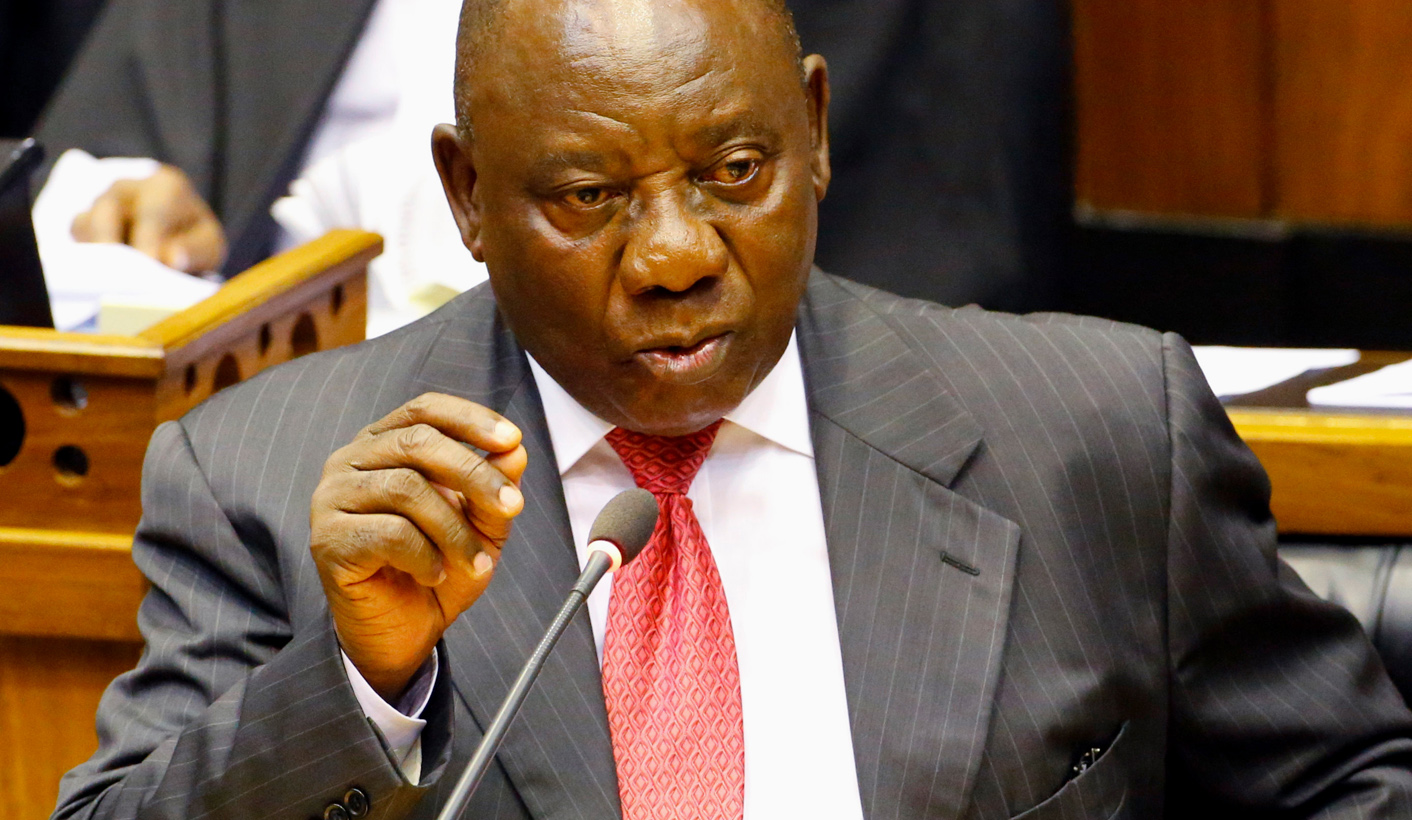 The election and swearing in of Matamela Cyril Ramaphosa as South Africa’s fifth president on Thursday marked the end of a bruising 11 days in the politics of the governing ANC that reverberated around the country. It has also ended the dominance of ANC exiles in the highest office of government, shifting the political culture firmly to those anti-apartheid activists who learnt their skills inside South Africa, organising at grassroots level within – and with – communities. By MARIANNE MERTEN.

The optics are different. And so is the tone. Styling himself as “a servant of the people of South Africa”, Cyril Ramaphosa – shortly after being elected as president in the National Assembly on Thursday afternoon – said: “South Africa must come first in everything we do.”

As one of the first steps as president-elect, he announced that there would be meetings with the opposition parties to find ways of co-operation, and made a commitment to raise the tone and level of discussion in the House so that the focus fell on debates to resolve national issues, not chaos.

This is significant not only for Parliament, but also the ANC.

In late 2014, in the wake of the noisy EFF “Pay back the money” protests in the House amid the Nkandla debacle over the Public Protector-ordered repayments for non-security upgrades at then President Jacob Zuma’s rural homestead, then Deputy President Ramaphosa attempted to broker a political deal to calm escalating tensions in the House. He did so as leader of government business, or the liaison between the executive and the national legislature, at the suggestion of United Democratic Movement (UDM) leader Bantu Holomisa.

There was a meeting at the presidential Tuynhuys offices at Parliament, a photo opportunity and commitment to work together. But Ramaphosa subsequently was castigated sharply by the ANC parliamentary caucus. At the time, efforts to build bridges with the opposition were a no-no: the opposition in the times of the Zuma presidency was more often than not publicly lumped into the category of regime change agents, or opportunistic grandstanders.

Ultimately the deal fell apart, and what unfolded in the National Assembly sittings was terse at best, chaotic at worst, with the brutal eviction of EFF MPs and three disrupted State of the Nation Addresses (SONAs) since 2015 amid ever increasing security.

Ramaphosa delivered the message of meetings between the president and opposition party leaders in different ways – directly, and in individual responses to all the political party leaders who earlier had delivered congratulations, qualified with a, “We’ll watch you.” The EFF was absent, having walked out in protest because, as party leader Julius Malema put it: “An illegitimate Parliament that violated the Constitution… No one should emerge from among us to stand as president. We strongly feel we need to dissolve this Parliament. Let’s not make an elite pact arrangement here.”

To DA leader Mmusi Maimane’s earlier comment, “I’ll meet you at the ballot box (in 2019)”, Ramaphosa responded: “Now I think he’s running ahead of himself…. Because, Honourable Maimane, I will be seeing you here in the House on a regular basis. Let us deal with the current moment rather than grandstanding.”

To Holomisa’s invitation to nyama (meat, a reference to the traditional celebratory sharing of a meal of meat and alcohol), Ramaphosa said yes, we’ll sit together eating meat. Earlier he waved off Holomisa’s suggestion that the man he refers to as “SG (secretary-general)”, from their joined days in the ANC, should move from the deputy president’s seat on the parliamentary benches to that of the president. “Ngomso (tomorrow),” Ramaphosa smiled.

There were smiles and light moments as acrimonious barbs turned into sharp wit. But not all’s necessarily well.

There is ambivalence about Ramaphosa even within the ANC parliamentary caucus, even among those who firmly called for Zuma’s exit from the Union Buildings. While the markets approved of Ramaphosa’s election – the rand firmed notably – the challenges of inequality, poverty, unemployment, corruption and State Capture remain, and are deeply entrenched.

Although law enforcement and prosecution bodies are now acting against some of those implicated in State Capture, the timing of this action coincides just a little too neatly with the political change, raising questions of these institutions’ political weather wanes superseding legislative and constitutional responsibilities to act without fear, favour or prejudice.

Marikana, the massacre of 34 Lonmin mineworkers by police in August 2012, at a time when Ramaphosa was a non-executive director, continues to hang over the now president’s head.

Among ANC top officials, one of whom Daily Maverick spoke to, there is the realisation that the hard work now would have to start.

A reminder of this “hard work” is found in the drop of support for the ANC as shown in the 2016 local government elections when the ANC lost control of Johannesburg, Tshwane and Nelson Mandela Bay and clung on in Ekurhuleni and other municipalities only through coalitions. This came as the popularity of Zuma, and public trust in democracy, also plummeted, according to the Afrobarometer survey “Report card: The Zuma era in South Africa, 2009 – 2018” published on Thursday.

While Zuma enjoyed 64% support in 2011, this had dropped to 36% in 2015, with 34% of citizens trusting the president of party and state somewhat or a lot. And the percentage of South Africans who saw the country as a “full democracy”, or one with minor problems, dropped to 48% from 66%.

“Fewer than half of citizens (47%) were satisfied in 2015 with the way their democracy was working, a decline of 13 percentage points from 2011,” according to the Afrobarometer survey.

Yet throughout this time the ANC stood by Zuma through a series of scandals and took collective responsibility not only for Nkandla, but also the municipal poll disaster of an eight percentage points decline.

On Thursday the ANC parliamentary benches erupted in song “Ixesha lisondele (loosely translated as “the time has come to rise”) after Ramaphosa’s unopposed election as South Africa’s president. And as he made his way to the podium after the election, there was the standing ovation without a word spoken as has become the norm in the Zuma presidency.

On Friday Ramaphosa delivers SONA2018, postponed amid the political upheavals over 11 days in February. It’s all eyes on Ramaphosa. DM