Zexit: Like sands through an hourglass, these are the days of our lives – Episode 3,197 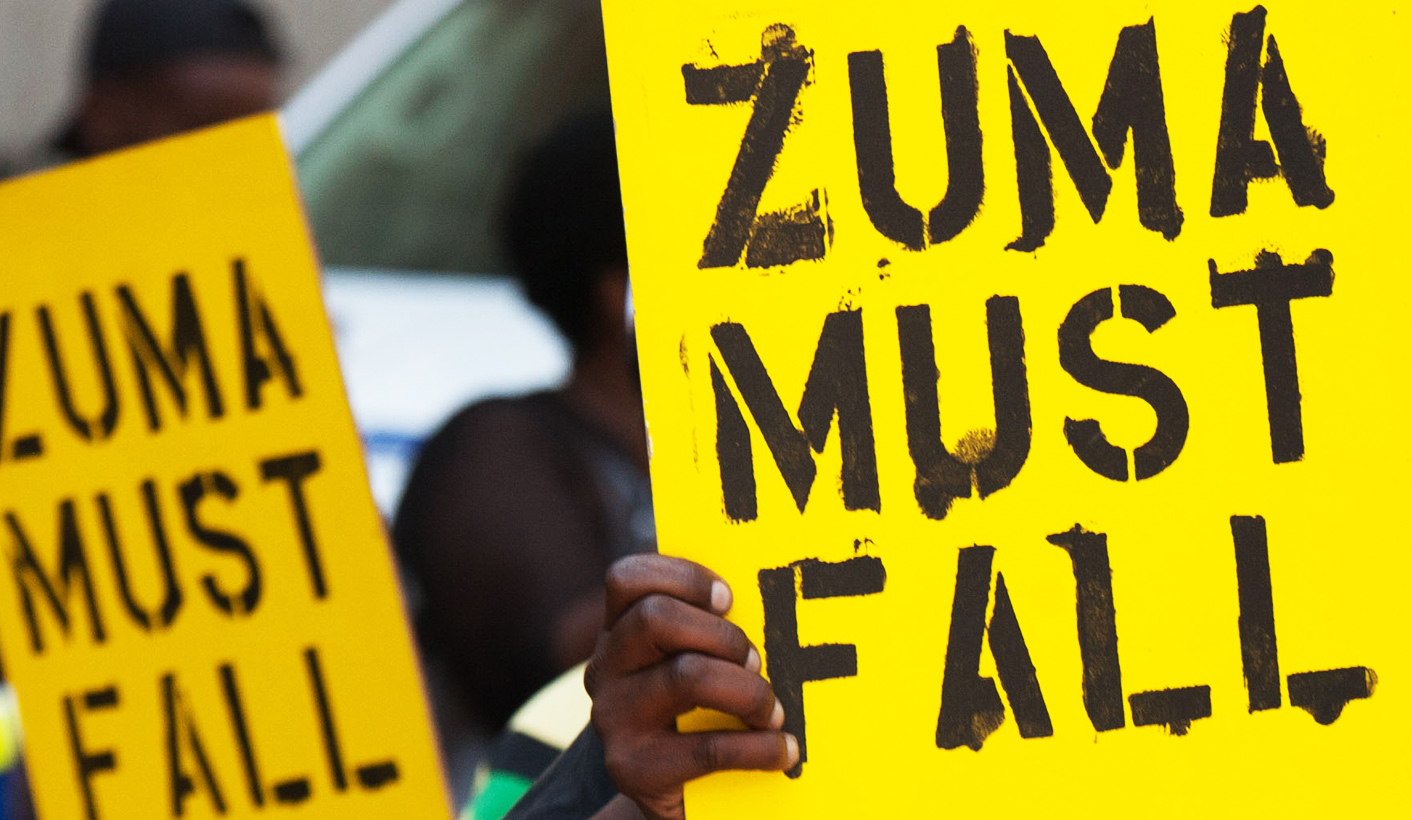 The clock is ticking on the “coming days” that ANC President Cyril Ramaphosa said would see the resolution of the “transition” and matters related to President Jacob Zuma’s future. Thursday’s ANC parliamentary caucus was a pit stop on that path. In the background: a series of meetings, for which Ramaphosa cleared his diary. In the forefront: not much as the ANC kicks for touch. It’s the traditional behaviour pattern of an ANC that closes ranks when under pressure, intent not to be seen to follow anyone’s tune, even if damage is wreaked all round. By MARIANNE MERTEN.

The often combative, sometimes even crude, tone of ANC parliamentary caucus meetings appears to have disappeared. In its stead, maybe something that could be described as more business-like, down-played and even friendly, if sombre.

There was no song, no loud chattering as ANC MPs left the Old Assembly Chamber. There were smiles and the odd “Hello” from MPs to the assembled media, and a little way from the cameras and smartphones, a quiet private chat between fellow ANC parliamentarians.

Officially, the ANC parliamentary caucus was urged to implement the decisions of the December national conference, according to ANC Secretary-General Ace Magashule at an impromptu briefing.

“It was just to say ‘Hello, how are you?’. Let’s unite,” he said, standing next to ANC Chief Whip Jackson Mthembu, who seemed to keep an eagle eye on proceedings. The aim was to “agitate and activate them (MPs). This is the year of renewal and unity”.

But, of course, the only question was about the only political question in the country – Zuma and his exit from the Union Buildings.

“In due course, we will know,” said Magashule before Mthembu cut short the briefing.

It’s a nod to the many balls Ramaphosa has to juggle, including further meetings with Zuma, as the ANC president’s statement on Wednesday said, to “conclude our discussions and report back to our organisation and the country in the coming days”.

That ANC president Cyril Ramaphosa would address the governing party’s parliamentary caucus was an open secret, confirmed when the meeting’s agenda was leaked and posted on Twitter. This “address by the president of the ANC” was effectively a run-down of the statement he put out on Wednesday, with a nod of acknowledgement that speculation continues, according to two of the parliamentarians Daily Maverick spoke to. Details? None.

The briefing by National Assembly Speaker Baleka Mbete and National Council of Provinces (NCOP) Chairperson Thandi Modise ran in the same vein. A new date for the State of the Nation Address (SONA) that was postponed this week? “Soon” was the response from one ANC MP afterwards.

But then anyone thinking anything concrete would emerge in a briefing to the ANC parliamentary caucus before the deal was signed and sealed – and approved at the highest level of the ANC – would simply be meandering down the garden path. It’s not how the ANC works.

The caucus was called on Monday, Daily Maverick has confirmed, after Sunday’s meeting of party officials and Zuma, who rejected the request to step down. That led to Monday’s meeting of the National Working Committee (NWC), the 20-strong structure dealing with day-to-day operations, which decided an urgent special National Executive Committee (NEC), the ANC’s highest decision-making body between national conferences, was required on Wednesday. Then the next day the ANC parliamentary caucus would have been briefed on the not unrealistic expectation of the NEC’s decision to recall Zuma.

That timeline is borne out by the leaked audio recording of ANC Treasurer-General Paul Mashatile speaking on the sidelines of the Mining Indaba in Cape Town. But Wednesday’s special urgent ANC NEC was cancelled due to the “constructive” and ongoing discussions between Zuma and Ramaphosa. And so there was nothing really to tell ANC MPs.

There is a long-standing ANC tradition that only it will decide what the ANC does and how it does it. This has played out again and again in the public domain amid bruising factional jockeying.

Remember the speculation in early 2013 that Mathole Motshekga would be replaced as ANC Chief Whip after he failed to be re-elected to the ANC NEC at its Mangaung national conference? Nothing came of it until six months later when then party secretary-general Gwede Mantashe came to Parliament to make the official announcement, and said the ANC had bided its time until the speculation died down because otherwise the ANC would be seen as letting others, such as journalists, set the party’s agenda.

Or Nkandla? For three years ANC MPs stood by Zuma, who was at the pinnacle of his power as president of party and country, leading to the March 2016 Constitutional Court ruling that Parliament had acted inconsistently with the Constitution by replacing with its own finding the then Public Protector Thuli Madonsela’s remedial action that Zuma had to repay a reasonable percentage of the cost of non-security upgrades. The previous year the National Assembly passed a resolution absolving Zuma from any repayments as the swimming (fire) pool, cattle kraal, chicken run and amphitheatre were deemed to be necessary security features.

Or the August 2017 motion of no confidence by secret ballot? ANC heavyweights descended on Parliament to crack the whip on maintaining the party line – vote against an opposition-initiated motion that amounted to regime change and a coup d’etat – despite mounting dissatisfaction within the ANC over Zuma’s presidency against the backdrop of ongoing and mounting calls for him to step down not only from civil society and business. The no confidence motion was defeated with 198 votes against, 177 for and nine abstentions, clearly showing that at least 35 ANC MPs used the secret ballot shielding them from party discipline to either abstain or vote with the opposition.

That there are problems with this ANC politicking-induced limbo over the when, if and how of Zuma leaving the Union Buildings is clear. And that’s not only in the parliamentary corridors, but elsewhere. The Western Cape ANC is hosting the launch of the party’s celebration of the centenary of Nelson Mandela’s birth, but can’t raise funds for this, or get buy-in, even if Ramaphosa is billed to address Sunday’s rally on Grand Parade on Madiba’s release from jail to the day, 28 years later. The question ANC organisers have most often faced, according to one insider: We’ll come to the table when Zuma’s gone. When will he be gone?

At Parliament, the EFF, following consultations between it and the DA, according to DA leader Mmusi Maimane’s statement, is writing to urgently reschedule the EFF motion of no confidence from its current date of 22 February to next week.

In the game of politics, such a call has upped the ante. Either the ANC sorts itself out or the governing party will find itself in the ignoble position of yet again closing ranks to defend a politician whose tenure in party and government top office has been marked by scandals.

On Monday leaders of opposition parties meet to discuss that EFF initiated no confidence motion, and what to do about getting a date for SONA.

Meanwhile, like government, and the ANC president, on Thursday Parliament’s presiding officers moved to say it’s business as usual. “Parliament’s work… is continuing in line with the Constitution… The postponement of (SONA) has had a limited impact on the ongoing work of parliamentary committees, the engine of Parliament, which make up more than 95% of the programme of the institution,” the national legislature said in a statement, adding that its presiding officers were in “close liaison” with the president to fix a new SONA date.

But the reality is that until the ANC untangles itself from this mess, and puts the interests of South Africa before its own dynamics, the nation holds its collective breath. DM