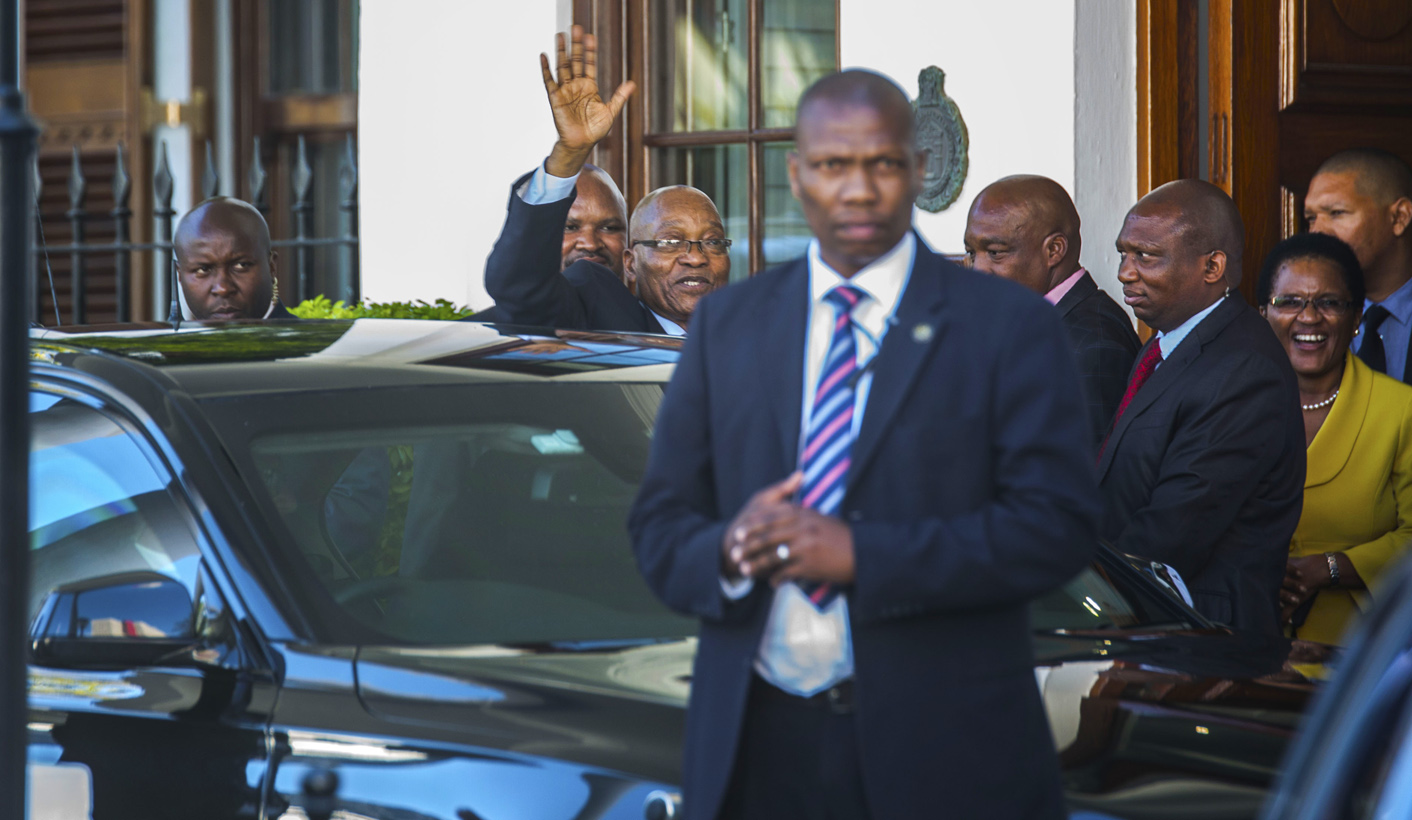 President Jacob Zuma is under pressure. That it’s not quite going his way emerged strongly when Parliament, in an unprecedented move, postponed the State of the Nation Address with only a day to go. But it’s politics, and nothing is straightforward. And so Wednesday’s urgent special ANC National Executive Committee meeting set to discuss Zuma’s future was cancelled late on Tuesday evening. It’s a political Mexican stand-off. By MARIANNE MERTEN

Nothing is straightforward. And definitely not in an ANC that President Jacob Zuma has had at his beck and call, throughout the Nkandla debacle, the damaging March 2017 midnight Cabinet reshuffle that changed the finance portfolio leadership, the #GuptaLeaks revelations about State Capture, waning election fortunes and various court challenges, to how his administration does its governance job.

In a high-pressure political week that saw the unprecedented move by Parliament to postpone the State of the Nation Address (SONA), Wednesday’s urgent extraordinary ANC National Executive Committee (NEC) meeting to discuss Zuma’s exit from the Union Buildings was cancelled at the 11th hour.

Daily Maverick confirmed that the cancellation was communicated to the NEC members in an urgent notice.

“By direction of the ANC President Comrade Cyril Ramaphosa, we hereby inform you that after fruitful and constructive discussions between the ANC President and President of the Republic held this (Tuesday) evening,” the NEC would not take place over two days from 17 February.

It’s a political Mexican stand-off. And one that could well revolve around the terms of Zuma’s exit and the Teflon politician’s determination to set these.

Political space for a meeting of the ANC NEC, the party’s highest decision-making structure between national conferences, to decide on Zuma’s future was clinched when Parliament postponed the State of the Nation Address on Tuesday, five days after maintaining it would go ahead, albeit with an all-important rider of possible extraordinary events.

When National Assembly Speaker Baleka Mbete announced the postponement on Tuesday it was as a decision “in the best interest of Parliament and the country”, and in an effort “to create room for establishing a much more conducive political atmosphere in Parliament”.

A subsequent statement from the president echoes this nod to political dynamics:

“The President has requested the postponement due to certain developments which make it not conducive to successfully hold the sitting and deliver the SONA,” it said.

That Zuma recognised the impossibility of delivering the address, something he is reported to have been quite adamant about, is tantamount to acknowledging a misstep in the political manoeuvring.

Another disrupted, chaotic SONA would have extracted a high political price for the governing ANC, which since Deputy President Cyril Ramaphosa’s election as party president at its December national conference has touted “renewal” and “transition”. Since then the governing party’s sights have firmly been set on what the ANC on Monday called the “management of the transition between the 5th and 6th administration of government”.

But it could have been as easy as the ANC NEC deciding on face-saving phraseology for its recall of President Jacob Zuma from the Union Buildings – and then Zuma, who repeatedly and publicly has proclaimed himself a loyal deployee of the ANC, resigns and exits the government stage.

Section 90(1) of the Constitution provides for an acting president “during a vacancy in the office of President” – a resignation creates such a vacancy – with the country’s deputy president listed as first in line for that post, then a minister, and last, the National Assembly Speaker. There is little that is needed beyond the administration of the oath of office by either the Chief Justice, or a judge appointed by him, in a ceremony that takes as little as a few minutes.

And Section 90(2) of the Constitution states: “An Acting President has the responsibilities, powers and functions of the President.”

There is no limit to an acting president’s term.

No election of a new president in the National Assembly is needed; it could just simply be Acting President Cyril Ramaphosa, currently South Africa’s deputy president and the ANC’s president. No resignation of Cabinet ministers needed either, although that may happen, voluntarily or through a reshuffle. All that’s required would be a good dollop of political will and nerves of steel in what is set to be a terse meeting of the ANC NEC, where factions in favour and against Zuma remain finely balanced, if fluid, in the changing political winds.

Zuma previously has proven his penchant for Stalingrad defence strategy and tactics. As head of state he has played out to the bitter end every legal challenge from the appointment of Menzi Simelane as head of the prosecution services (despite a commission of inquiry headed by former National Assembly Speaker Frene Ginwala having found him untruthful), the Nkandla debacle (which led to the Constitutional Court ruling in March 2016 that Zuma had violated his oath of office), years of court battles over the so-called Spy Tapes that are fundamental to the April 2009 dropping of over 700 criminal charges against him, and the legal challenges to the public protector’s State Capture commission of inquiry.

While the ANC NEC may well tell Zuma to resign amid an expectation that a loyal cadre follows party wishes, the prospect of a proverbial presidential middle finger would not be misplaced. There could be a court challenge, or an 11th hour Cabinet reshuffle to get rid of Ramaphosa or, in a last act of office, the appointment of a pliant minister as acting president, as the Constitution permits. Or not.

The South African Communist Party (SACP) on Tuesday went public on rumours of an 11th hour Zuma Cabinet reshuffle, calling on Zuma to either confirm or deny that he was planning to replace Ramaphosa with Nkosazana Dlamini Zuma to put the candidate he preferred in the party contest for top job in prime place to take over as acting president.

The SACP also called Zuma on what it called “ethnic mobilisation, including that of Amabutho (Zulu regiments) that President Jacob Zuma has apparently engaged in as part of his plan to continue overstaying his welcome in office”, according to an SACP statement.

The Presidency denied these claims.

Such background machinations should not come as a surprise; the first signs of mobilisation that had proven successful for Zuma as far back as his rape trial in 2005 took place on Monday as “Hands Off Zuma” protesters gathered at Luthuli House. The ANC has frequently cited concerns of a split should Zuma be asked to go. Two attempts in ANC NEC meetings in November 2016 and March 2017 were defeated.

Instead the ANC stood by Zuma. It took collective responsibility for its dip in general support – largely linked in its own analysis to the Nkandla and State Capture debacles – and declining election fortunes that in 2016 cost it control of the country’s economic hub of Johannesburg, the Eastern Cape’s heartland of the Nelson Mandela Bay Metro and the country’s administrative capital, Tshwane.

SONA’s unprecedented postponement comes at a political cost, but moving the Budget on 21 February would be devastating for South Africa where economic governance has been battered by State Capture and financial challenges, such as the tax collector missing its target by R50.8-billion. Without SONA, where government’s programmes and priorities are set out, and the three-day debate on the presidential address, the rand and cents allocations presented in the Budget make little sense.

When Mbeki was recalled by the ANC NEC on 20 September 2008, he accepted the ANC’s instructions and within a day resigned to Mbete and addressed the nation on his resignation. On 25 September ANC Deputy President Kgalema Motlanthe was sworn in as head of state, as caretaker president of South Africa until the 2009 elections.

It was messy, but nowhere near as messy as what is playing out in the ANC, and the government it leads, in February 2018. DM

Photo: The Last Wave? Following the announcement of the postponement of the annual State of the Nation Address, President Jacob Zuma is seen leaving the parliamentary precinct on 6 February 2018. (Leila Dee Dougan / Daily Maverick)