The Way of Gupta? Pressure mounts for Naspers as MultiChoice faces fires on multiple fronts 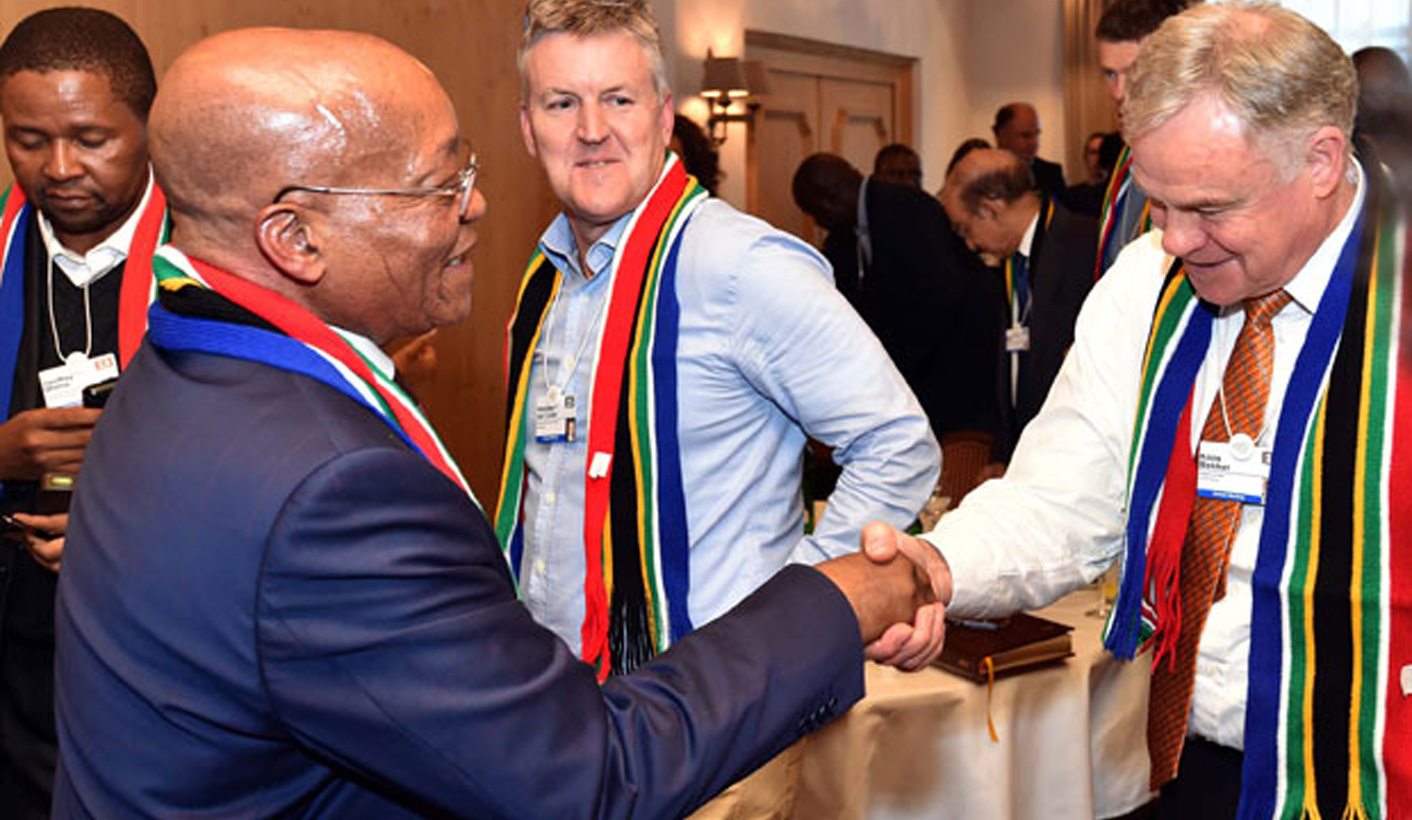 With MultiChoice accused of having essentially “bought” government policy over digital encryption to benefit its business, calls for investigations are heaping up both locally and internationally. In addition to a potential class action lawsuit against the company being mooted by a US firm, the Chinese Securities Regulatory Commission has also been asked to launch an inquiry into Naspers. Comparisons between Naspers and the Gupta-owned company Oakbay, meanwhile, are inevitable. By REBECCA DAVIS.

The current scandal in which MultiChoice finds itself embroiled – and by extension its holding company, Naspers – has cast retrospective light on a number of issues from South Africa’s recent past.

One is the removal of Communications Minister Yunus Carrim in 2014 after just 10 months in his post, despite Carrim being hailed by industry players as the most effective minister ever to serve in that department.

Now it seems likely that the sticking point was Carrim’s outspoken support for the introduction of encrypted set-top boxes when South Africa was about to make the migration from analogue to digital TV broadcasting. Shortly after Carrim was replaced by Minister Faith Muthambi, Muthambi expressed her support for unencrypted devices – contrary to the preference not just of Carrim, but the ANC itself.

Asked if Carrim believes he was moved out of the Communications portfolio as a result of his support for encryption, he responds:

“That’s what most people said, including senior ANC leaders.”

Carrim says he was informed shortly after Cabinet took a decision in favour of encryption, in December 2013, that there was a campaign to remove him as a result of that policy.

“It was alleged that among the key people in it were an SABC official and board member, and people from MultiChoice and Naspers,” Carrim told Daily Maverick.

These rumours have now been lent credence by the #GuptaLeaks report showing how MultiChoice lobbied Muthambi – and paid off the Guptas via ANN7 – to ensure the encryption decision went in the direction that would benefit the company. They have been further strengthened by the DA’s release of minutes of a meeting between SABC executives and MultiChoice CEO Imtiaz Patel, in which Patel tells his audience that MultiChoice is willing to pay R100-million a year towards a 24-hour SABC news channel with the “deal breaker” condition that the “problem” of the set-top issue is resolved.

It seems likely that Carrim was viewed as the fly in the ointment as Communications Minister, with Carrim having made it clear to Naspers chair Koos Bekker that he did not agree with him on the topic of encryption.

Unencrypted set-top boxes would allow MultiChoice to maintain its monopoly over paid TV programming via DStv. If the government instituted encryption capacity, by contrast, it would mean that other broadcasters would be able to implement high quality paid programming.

Today, Carrim says that the choice was clear for both him and the ANC.

“Among many other reasons, encryption was aimed at facilitating new black entrepreneurs to enter the pay-TV market to reduce the extremely high level of monopoly; increase access to pay-TV to those who could not afford it; encourage the SABC to compete against DStv, which was usurping its market and advertising revenue; and stimulate the local electronics industry and job-creation,” Carrim says.

Naspers’ response to the claims that the company exerted improper pressure and used financial incentives to influence policy has been twofold. First, Naspers says that for big businesses to lobby government over policy is completely normal.

“We interact with the government every single day,” Naspers chair Koos Bekker told 702 on Friday. “We are debating, as of now, probably 10 policy elements with five government departments.”

Naspers has also pointed out that it has never hidden its preferences about the encryption debate. “At some stage we even took out a full-page [newspaper] advertisement and we put out an open letter in which we put out our views,” Naspers CEO Bob van Dijk told Fin24 this week.

But Carrim points out that there is a distinction between lobbying and buying policy. He says it is nonsense to suggest that Multichoice’s actions are par for the course for big business.

“Of course, business has every right to lobby and should do so, but within reasonable limits and within a code of ethics,” Carrim says.

The second line of defence has been for holding company Naspers to seek to separate itself from MultiChoice, pointing out that MultiChoice has an independent board responsible for corporate governance failures.

Naspers is the sole owner of MultiChoice.

Doubt has been cast on this notion – of the essential separation of the two bodies – by reports that Naspers chair Koos Bekker was personally and intimately involved with the set-top encryption lobbying. Carrim has said that he met with Bekker twice and also received text messages and calls from him on the topic. Bekker has only confirmed that one meeting took place, at which he says Finance Minister Pravin Gordhan was present and nothing untoward took place.

Bekker has managed to maintain a relatively low profile in post-apartheid South African politics, despite building Naspers into Africa’s largest company. The recent allegations, however, raise serious questions about the level of influence his financial muscle may have been able to exert on government policy.

A 2015 investigation by amaBhungane produced a 2014 memorandum sent by Bekker to senior management at MultiChoice stating confidently that Carrim would not be re-appointed as Communications Minister after the 2014 general elections – as indeed proved the case. The question of how Bekker would have had this information remains an urgent one, particularly as it brings to mind similarities to the Gupta brothers’ approach to business.

Other old rumours are now being re-examined. A 2013 TechCentral article repeated a claim that President Jacob Zuma met personally with Bekker before the launch of ANN7 to “propose the idea of DStv providing the platform for the Guptas”.

Asked for comment on this allegation on Wednesday, Naspers spokesperson Meloy Horn told Daily Maverick that the suggestion was “mischievous”.

Horn said: “Mr Bekker has never met President Zuma privately and has never discussed any broadcast-related matters with him at all.”

Bekker’s personal response to the new MultiChoice claims thus far has seemed irritated and defensive, with the Naspers chair using the phrase “load of crap” in two separate interviews to dismiss notions of impropriety.

But this particular scandal looks unlikely to disappear quietly. This week, US law form Pomerantz, which specialises in class action lawsuits, put out a call for Naspers shareholders who wished to investigate the possibility of launching a class action suit against Naspers on the basis of “whether Naspers and certain of its officers and/or directors have engaged in securities fraud or other unlawful business practices”.

To join the class action, Naspers stakeholders must sign a declaration to the effect that they are “willing to serve as a representative party on behalf of a class of investors who purchased or acquired Naspers securities during the [unspecified] Class Period, including providing testimony at deposition and trial, if necessary”.

As the Mail & Guardian pointed out last week, just 0.2% of Naspers shareholders – a tiny group including Koos Bekker – control 68% of its vote.

On Tuesday, meanwhile, a civil society group called the #SA1stForum wrote to the Chinese Securities Regulatory Commission asking the body to launch an investigation into Naspers, on the basis of Naspers being a significant shareholder in Chinese tech company Tencent.

MultiChoice and Naspers are now facing investigations on multiple fronts. The Democratic Alliance has asked that ICASA (the Independent Communications Authority) launch its own probe. Other opposition parties have called for a parliamentary inquiry, and the ANC’s Jackson Mthembu told journalists this week that he supported calls for an investigation.

Naspers has announced an internal investigation into MultiChoice, but Carrim says this isn’t good enough.

He asks: “If Naspers has nothing to hide why don’t they propose inquiries by Parliament, ICASA, the Competitions Commission and the Public Protector, instead of MultiChoice investigating itself?” DM

The Financial Wellness Coach: Everything you need to know about moving money offshore