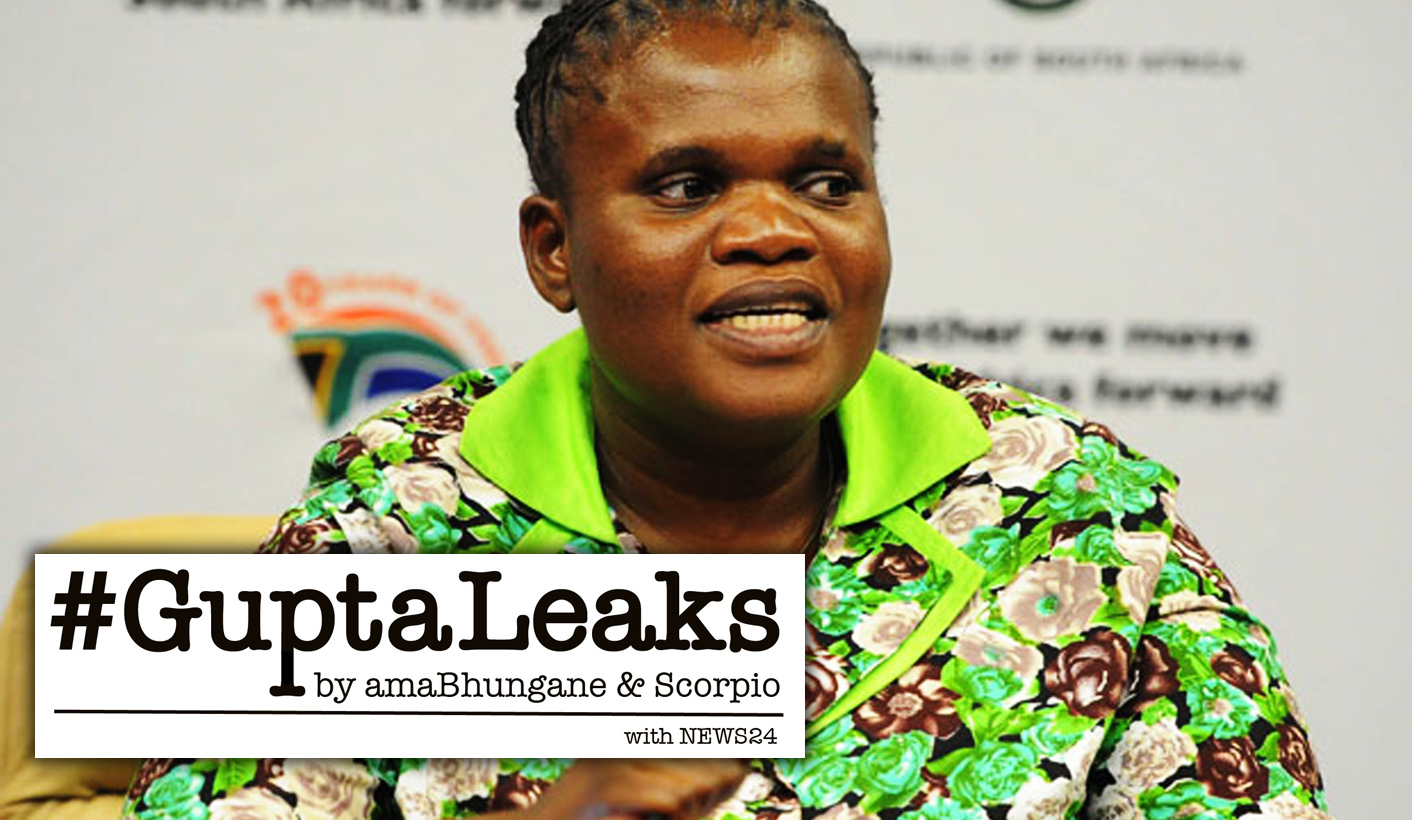 MultiChoice, the pay-TV company that owns DStv and M-Net, made a questionable payment of R25m to the Guptas' controversial ANN7 channel, the #GuptaLeaks show. In addition, MultiChoice increased its annual payment to ANN7 from R50m to R141m. The payments came after the family seemingly assisted former communications minister Faith Muthambi in getting President Jacob Zuma to transfer certain broadcasting powers to her, something MultiChoice was lobbying the minister for. By NEWS24.

Following the transfer of powers, Muthambi controversially pushed through a decision in favour of unencrypted set-top boxes, which benefitted MultiChoice.

Muthambi’s decision flouted her own party’s policy on the issue. The ANC supported encryption – required for pay-TV – to promote competition in the sector.

VIEW ALL THE RELATED DOCUMENTS.

After a lengthy court battle, the Constitutional Court earlier this year ruled that it was within Muthambi’s right to make policy decisions affecting the broadcasting sector.

MultiChoice however deny that there is any relationship between the policy outcome in its favour and payments made to ANN7. In a statement, the company said: “MultiChoice rejects your insinuations in the strongest possible terms.”

The Guptas did not respond to questions but have previously dismissed the #GuptaLeaks as “not authentic”.

MultiChoice has been in the news this week for paying the Guptas R50m per annum for ANN7.

This document was unearthed in-between the more than 200,000 emails that have become known as the #GuptaLeaks.

The agreement was signed by MultiChoice’s Glen Marques and Nazeem Howa for Infinity Media Networks, ANN7’s holding company, on September 9, 2015.

The agreement not only ensured that MultiChoice would fork out R141m a year for ANN7 from April 1, 2016, but also guaranteed the Gupta-controlled company a “once off amount” of R25m.

This had to be paid to Infinity within seven days of the contract being signed, according to the agreement.

Two broadcasting insiders who had previously been involved in MultiChoice’s negotiations with news channels say such a “once off amount” is unheard of in the industry.

MultiChoice also maintains that its fee for ANN7 represented a “fair value” at the time of signing the fourth contract amendment, given the cost of running a 24-hour news channel.

“After several rounds of negotiations over a period of three years, during which we developed an understanding of the channel’s operating costs and the need for improvements in production quality over time, the final fee was set,” says MultiChoice.

MultiChoice admits that it made policy proposals to Muthambi, but the company says the majority of its suggestions were not taken up in later amendments to government legislation.

The company also denies that it was aware that Muthambi was forwarding MultiChoice’s suggestions to the Guptas.

“MultiChoice has absolutely no knowledge of the minister sending our proposals to any other person, and can in no way be held responsible for that,” says the company.

The issue at hand involves a long-running battle over whether government should favour either encrypted or unencrypted set-top boxes for the country’s digital migration process.

Critics of a policy supporting unencrypted set-top boxes argue that would-be rivals of MultiChoice can only compete with the latter’s DStv service if government enforces the roll-out of encrypted devices.

But Carrim would not have the last say on the matter.

MultiChoice fingerprints in the #GuptaLeaks

The document’s metadata reveals that its creator was Clarissa Mack, MultiChoice’s then-group executive for regulatory and policy affairs. Mack created the document on July 17, the day before Muthambi forwarded it to Chawla. Mack was also the last person to have modified the file.

Mack wrote that when Zuma created the two departments, there was an “assumption … that broadcasting including digital migration would report to the Minister of Communications”.

“The proclamation published on 15 July 2014 did not give effect to this division,” complained Mack. She also made detailed suggestions with regards to how the relevant decision-making powers should be split between Muthambi’s and Cwele’s departments.

Mack’s letter made it clear that MultiChoice wanted key powers guaranteed by parts of the Electronic Communications Act to be transferred back to Muthambi.

“It is therefore the Minister of Telecommunications and Postal Service [Cwele] who will make policy and issue policy directives to Icasa for broadcasting, including public service broadcasting,” Mack added.

Over the course of the next few months, Muthambi would send Chawla four other documents relating to broadcasting policy. Chawla forwarded most of these to Tony Gupta and Duduzane Zuma, the president’s son.

MultiChoice has admitted that this document was also penned by Mack.

Chawla forwarded the document to Tony Gupta and Duduzane Zuma on the same day. The document stipulated in detail which aspects of the Electronic Communications Act Muthambi wanted to be moved from Cwele back to her.

“These sections must be transferred to the Minister of Communications,” Muthambi wrote to Chawla.

The document specifically focused on the parts of the Act dealing with the Independent Communications Authority of South Africa (Icasa), one of the key government bodies involved in the digital television migration process.

Muthambi also sent Chawla a Word document called “Responsibility for Infraco and Sentech” on July 25, adding in her email that “Sentech’s signal distribution must rest with the Ministry of Communications”. Apart from Icasa, Sentech is a key role-player in the digital migration process, whilst Broadband Infraco is a state-owned telecommunications company.

This document was also created by Mack, according to MultiChoice.

Perhaps the most shocking aspect of Muthambi’s communications with Chawla came in the form of a document called “final proclamation 01 August”, sent by the minister to the Gupta associate on the date mentioned in the document’s title.

The proposed proclamation stipulated that control over section 3 of the Electronic Communications Act needed to be transferred back to Muthambi, exactly as Mack had originally pleaded in her letter.

It also included the proposed changes to the Icasa Act that Muthambi had earlier sent to Chawla.

Asked whether Mack had also created this document, MultiChoice said:

“As mentioned previously, MultiChoice, like other companies in the sector, regularly engages the industry regulator and government on matters that affect the broadcasting sector. This includes making proposals that may take a specific regulatory or legislative form. Yes, this document was sent to Ms Muthambi. The proposals were inserted in a legislative template we took from previous Proclamations in the Government Gazette. Again, many of our proposals were rejected.”

On November 25, Zuma signed proclamation 79 of 2014. With the stroke of a pen, Zuma gave legislative effect to the transfer of some of the powers advocated for in Mack’s documents.

Muthambi wasted little time to make use of her newly-won policy powers. In March 2015, she stunned the broadcasting industry by issuing an amendment to government’s digital migration policy that went directly against her own party’s stance on the matter.

The new set-top boxes would “not have capabilities to encrypt broadcast signals,” declared a clause Muthambi inserted in the amendment.

Only two months before, at the ANC’s January lekgotla, the ruling party stated that it supported Carrim’s December 2013 policy, which had paved the way for encrypted set-top boxes.

In her response to News24, Muthambi admitted that she had received “submissions” from MultiChoice “sent … through Ms Mack”. But Muthambi says that she had “opened the door” for such submissions after the July 2014 proclamation caused “confusion and uncertainty” over which of the two departments would be responsible for broadcasting policy.

“The minister denies having been influenced by any person in the finalisation of the digital migration policy after consideration of all submissions by all interested parties…” Muthambi’s spokesperson said in a statement.

Muthambi also failed to address News24’s detailed queries about the emails she had sent to Chawla.

On December 4, 2014, about a week after Zuma transferred the relevant broadcasting policy powers to Muthambi, Howa sent Tony Gupta a draft “third channel amendment agreement” for the deal between MultiChoice and Infinity.

This is the unsigned document that recently surfaced in the media.

The signed “fourth channel amendment agreement”, however, reveals that MultiChoice first agreed to increase the ANN7 fee to R100m per annum, before ultimately settling on an amount of R141m.

But it is the “once off” payment of R25m that has industry insiders most concerned.

“It is unheard of. I haven’t seen any once-off payments [in] any of the agreements with MultiChoice that I’d been privy to,” said one of the industry insiders.

The two sources, along with a third industry expert with direct knowledge of MultiChoice’s agreements with news channels, all agree that even R50m per year would constitute a bad investment for MultiChoice.

“What they pay ANN7 compared to what they get from it [the agreement] makes no commercial sense. It is such a bad channel and its viewership is so low that ANN7 actually needs to pay DStv to be on their platform,” said one of the sources.

Despite ANN7’s relatively low audience figures, MultiChoice maintains that it believed the fee increases were justified.

“We believe the fee represented fair value at the time, particularly considering that ANN7 was a start-up channel requiring significant initial investment to get off the ground – as opposed to others, who could leverage existing infrastructure and content,” said MultiChoice.

“We deny that there is any relationship between our submission on the proclamation, the channel supply agreement for ANN7, and any fees or increase in fees paid for that channel.”

Asked about his relationship with the Guptas, Patel said he couldn’t remember when he first met the Guptas.

“I did interact with them, in particular between approximately 2007-2010, and our relationship tapered off after that. I can’t recall attending any Gupta social functions after about 2010, except for the wedding in 2013,” said Patel. DM