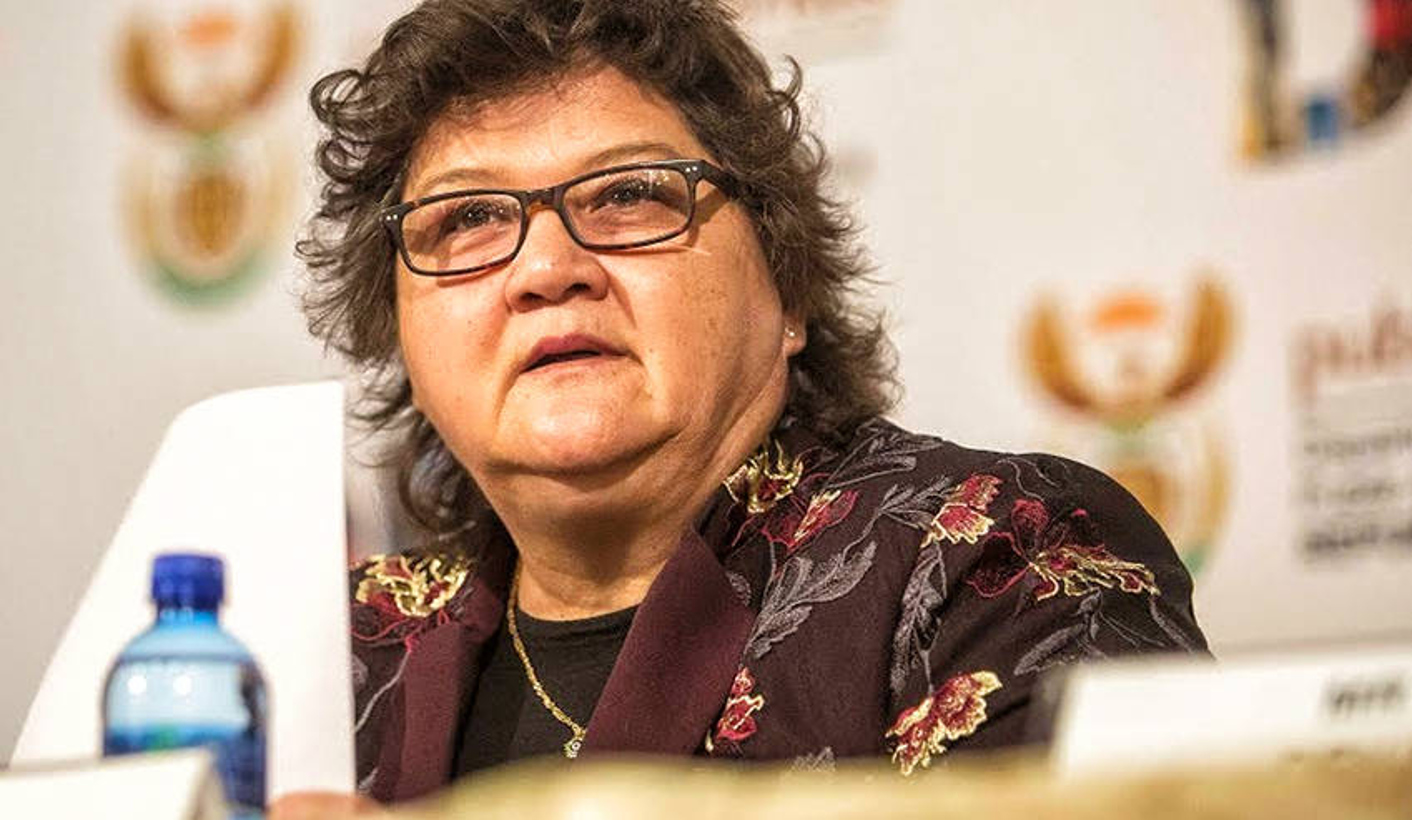 Parliament’s public enterprises committee as part of its oversight had encouraged the executives and board chairpersons of State-owned Entities (SoEs) to share information to improve performance. But a meeting in early 2015 called by then SAA board chairperson Dudu Myeni with her Eskom counterpart Zola Tsotsi at the presidential residence in Durban wasn’t quite what had been contemplated. It was that meeting, at which President Jacob Zuma also made an appearance, according to testimony at the parliamentary State Sapture inquiry on Wednesday, which set in motion a series of suspensions and resignations at Eskom that link to further State Capture deals. By MARIANNE MERTEN.

A phone call from President Jacob Zuma on the eve of the Eskom board meeting scheduled for 26 February 2015 led to the postponement of what was meant to be the first gathering since the appointment of new members late in 2014. The president had called Eskom board chairperson Zola Tsotsi after he had been unable to get hold of the public enterprises minister or the deputy to say he could expect a call from the public enterprises acting director-general.

That presidential phone call was followed up less than a week later by a call from then SAA board chairperson Dudu Myeni, who is also chairperson of the JG Zuma Foundation, calling Tsotsi to a meeting at the presidential residence in Durban. Or, as Tsotsi told MPs on Wednesday:

“On or about 7 March 2015, I arrived at the Durban presidential residence and was met by Dudu Myeni, her son Talent, and a certain Mr Nick Lennell, who was introduced to me as a lawyer. Ms Myeni then proceeded to outline the purpose of the meeting, namely, that the situation of Eskom’s financial stress and poor technical performance warrants that an inquiry into the company be instituted. She further elaborated that, in the course of the said enquiry, three executives, namely acting Chief Executive Tshediso Matona, Group Executive for Group Capital Dan Marokane and Group Executive for Commercial Matshela Koko, are to be suspended…

“In her view, the suspension of the executives will not create difficulties because it will be explained that they are not accused of wrongdoing, but they are being asked to allow space for the enquiry to proceed unencumbered by their presence.

“Shortly hereafter the president entered. After some pleasantries, he requested to know what was up for discussion, whereupon Ms Myeni repeated what she had previously said…”

Tsotsi delivered his testimony to Parliament’s public enterprises inquiry into State Capture deadpan and calmly. But he battled to explain during the subsequent questions why he didn’t ask why this invitation to a meeting on Eskom had come from someone who has nothing to do with Eskom and was held at the presidential residence.

Yes, he had tried to ask Myeni, but she did not want to discuss it over the phone. No, he did not raise it during the meeting itself. Yes, he tried again later, but did not succeed.

Did he regard himself as having been given his marching orders from the highest level? Was the meeting with Myeni or the president? “That’s a question that’s not clear,” replied Tsotsi, after having explained earlier: “I understood the president was aware I was coming and I expected I would see him.”

As at that point his relationship with Public Enterprise Minister Lynne Brown had broken down, and he took the matter to the board as it was the appropriate platform to make this decision on suspension. After an initial meeting, the minister was invited to a second one a couple of days later on 11 March when the suspensions were agreed to. Tsotsi explained there was no one on the board who opposed; it was only a question of whether there could not have been another human resources process, for example, recusal.

On Tuesday the inquiry had heard from former non-executive board members Venete Klein and Viroshini Naidoo that there had been concern about the suspension they said was vigorously argued for by Tsotsi, but the board sought to allay aspersions on the executives by emphasising there actually were no charges against them.

At the time, in 2015, Brown publicly appealed for space for this “deep-dive” investigation into the state of affairs at Eskom. That eventually led to the Denton report, the full release of which has been pushed for by the DA after a heavily redacted document was made available amid official insistence, including from Brown, that most of its recommendations had been implemented.

The meeting between Myeni and Tsotsi was confirmed to the inquiry by Lennell who, according to inquiry evidence leader Ntuthuzelo Vanara, added that the president had undertaken to contact the minister. On Wednesday evening, Brown told MPs: “No, the president didn’t call me. I don’t know when the meeting was…”

Presidency spokesperson Bongani Ngqulunga could not be reached for comment by phone and he did not respond to a text request on Wednesday. However, the public enterprises inquiry resolved to invite Myeni alongside Tony, Atul and Ajay Gupta, as well as other persons named in testimony to appear before the inquiry. The EFF and African Christian Democratic Party (ACDP) also requested for Zuma to be invited.

The meeting called by Myeni at the Durban presidential residence set in motion steps that led to the suspension of Matona, Marokane and Koko – with Eskom finance director Tsholofelo Molefe added to the list during subsequent board discussions – which ultimately led to the departure of three of the four executives by mid-2015.

By 23 May 2015 also gone was Tsotsi, who earlier told MPs how Tony Gupta told him days before the 2015 State of the nation Address (SONA) that he was “not helping us with anything. We are the ones who put you in the position you are in. We are the ones who can take you out.” Officially Tsotsi resigned, but on Wednesday he described his departure as a “removal” after the board had obtained a legal opinion that was critical of his on the job performance and proffered “trumped up” charges.

In place of those who left Eskom came Ben Ngubane as Eskom board chairperson and Brian Molefe, initially as acting chief executive, then full-time from 1 October 2015.

The official narrative is that Molefe beat load shedding that cost South Africa’s economy over R400-million a day – and for this he received a glowing endorsement not only from the board, but also the minister. But at the same time unfolded the controversial R1.6-billion pre-paid coal deal that ultimately enabled the Gupta-linked Tegeta to purchase Optimum coal mine from Glencore, and payments to the Gupta-linked Trillian Capital Partners in its off-the-books dealings with McKinsey.

Koko was the only executive who returned to Eskom and was appointed acting chief executive before he was suspended for dodgy contracts, including one to a company run by his stepdaughter. According to earlier testimony to the inquiry by Eskom board spokesperson Khulani Qoma, initial steps by the board to suspend Koko earlier this year were averted when Zethembe Khoza – he was acting Eskom board chairperson after Ngubane resigned amid the controversy over Molefe’s early retirement/resignation earlier this year – alerted a “G-brother”. The unnamed Gupta brother in turn called Brown, who called the board chairperson. That’s why Brown was captured, according to Qoma.

The #GuptaLeaks have unearthed a network of dodgy dealing involving SoEs, the Gupta family-linked companies and related business partners like Salim Essa, into top political echelons.

On Wednesday Brown walked into a shit storm, and seemed to have decided that the best defence was to attack. There must be action given the “overwhelming circumstantial evidence of malfeasance” at SoEs, she said, but giving law enforcement agencies time to do proper investigations appeared not to be on the agenda. “Right now, cleaning up the SOCs (State-owned Companies) is of secondary importance to using the trouble they’re in to achieve short-term political and business objectives – regardless of the cost to the company or the country.”

Brown had previously taken exception to the inquiry. And on Wednesday she stuck to her guns. “One of the load-bearing legs of the democracy is our system of justice. Mass murderers and rapists are entitled to be informed of allegations witnesses will make against them in order to defend themselves. They are entitled to cross-examine those making allegations against them. But not Eskom or the Department of Public Enterprises.”

She appealed for moves to support SoEs, not beat them down with “the weight of untested allegations”.

Brown also denied knowing Tony Gupta and Salim Essa, as Tsotsi just hours earlier told MPs, when he was invited to her home. “Salim Essa and Tony Gupta were not at my house. Tsotsi must tell me at which date,” Brown said, adding later: “I have never met a Gupta in my executive functions I have to perform… I do not know Salim Essa.”

“The shareholder (minister) receives the list from the department and asks for the necessary clarifications before taking it for consultation to the deployment committee (of the ANC) and then to Cabinet for approval. The list of board members approved by Cabinet are appointed by the shareholder,” explained Brown, adding that she had never changed the short list from which members are appointed.

It was an often bruising interaction with MPs that went on well over six hours until just before midnight on Wednesday. And that meeting between Myeni, Tsotsi and Zuma kept on popping up. Brown stayed on her message of not knowing, even if she did acknowledge having discussions with the president around Eskom and Eskom-related matters like independent power producers (IPPs). “It’s the first time I’m hearing of this meeting,” she said.

And that’s just it about State Capture – plausible deniability while ticking the boxes of the law and governance processes. DM