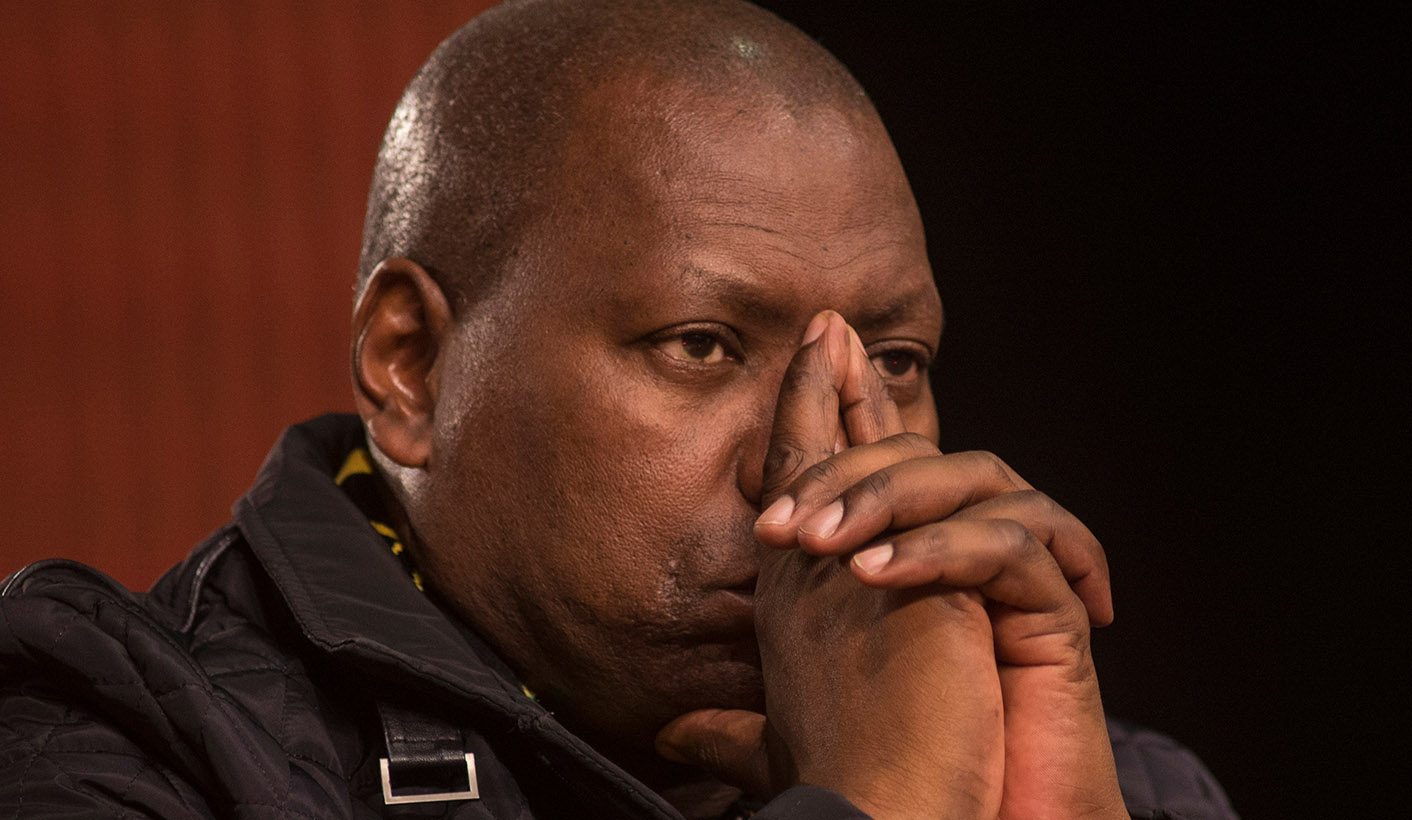 In the Byzantine manoeuvrings and sleight of hand of the ANC presidential succession race, anything is possible. And for United Democratic Movement (UDM) leader Bantu Holomisa it is that former African Union Commission chairperson Nkosazana Dlamini Zuma is the decoy to distract as the real game plan is lined up. And so the third way of ANC Treasurer Zweli Mkhize was “nonsense”. By MARIANNE MERTEN.

As a military man, United Democratic Movement (UDM) leader Bantu Holomisa is given to military analogies. And so he likens the 2017 ANC presidency campaign by Nkosazana Dlamini Zuma to an impi attack, drawing attention away from the real movement on the flanks.

“What is there has always been there – (ANC Treasurer) Zweli Mkhize,” Holomisa told Daily Maverick. “But then the Bathabiles (ANC Women’s League president Bathabile Dlamini) of this world came as a surprise, possibly without consultation, and Jacob Zuma in order to be relevant made comments that have been misconstrued that he’s supporting his ex-wife.”

The ANC Women’s League public pronouncement in January that it was time for a woman ANC president and that person would be Dlamini Zuma came weeks before the ANC had even begun considering when party presidential nominations could be opened officially. Other women presidential candidates, particularly Human Settlements Minister Lindiwe Sisulu, disagreed. But when Sisulu described this ANC Women’s League decision as “undemocratic”, the league hit back in a statement in July: “Anyone who is aggrieved by decision of the democratically elected structures of the ANC or its leagues must use the organisational internal processes”. After Sisulu and National Assembly Speaker Baleka Mbete officially stepped up to the plate when the nominations window opened last month, Dlamini publicly said Dlamini Zuma was the ANC Women’s League’s only candidate.

In this superheated ANC politicking, with an unprecedented number of ANC presidential contenders, this may well be part of a bigger game plan. It has created an environment where Mkhize can be styled as the unity candidate, a third way in what is widely regarded a stand-off between Dlamini Zuma and Deputy President Cyril Ramaphosa.

“This third way is nonsense. It’s only ever been one way,” said Holomisa. “It has always been rumoured (Zuma’s) choice was Zweli Mkhize.”

Describing Dlamini Zuma as “known to be no-nonsense”, he argues that Mkhize as ANC president, or as deputy to Ramaphosa, was nothing more than a continuation of the current ANC outlook. Mkhize, like Ramaphosa, has been part of the party’s top six officials that have set the ANC’s direction in recent years – be that telling MPs not to vote in secret in the August secret ballot no confidence motion in President Jacob Zuma, or the decision that Zuma did not have to pay for Nkandla security upgrades, which the ANC implemented via a parliamentary ad hoc committee.

“It’s not about a Zuma legacy, but that of the ANC legacy. And Ramaphosa and Mkhize are part of the top six,” said Holomisa. “The ANC is not what it used to be. If it begins to cleanse itself, it will destroy itself.”

Having criss-crossed the country, addressing innumerable memorial lectures and cadres forums, Mkhize has emphasised unity. It’s something he’s deeply familiar with. As ANC KwaZulu-Natal chairperson since 2008, and premier since 2009, Mkhize kept the province on the same page. Following his move to Luthuli House after being elected treasurer at the December 2012 Mangaung ANC national conference, this unity unravelled. And it remains unravelled, following the recent court decision that the provincial ANC executive was unlawfully elected but with a recent ANC National Executive Committee (NEC) decision for a provincial task team including both sides yet to be implemented. By all accounts the visit by the top six to KwaZulu-Natal to resolve the matter may have led to frank discussions, but the appeal against the court judgment is still on, and the “unity” task team not established.

Mkhize appears also to be appreciated by business, hitting the right notes of reasonableness and good governance. In this he’s not much different to Ramaphosa, the trade unionist turned Constitutional Assembly negotiator, businessman and ANC politician. Unlike Ramaphosa, Mkhize has a firm constituency, and a political track record as an ANC insider.

On the campaign trail, Mkhize has won support in KwaZulu-Natal, Eastern Cape and Mpumalanga. And in recent weeks it has emerged Mpumalanga under ANC chairperson and Premier David “DD” Mabuza – he also seems to have distanced himself recently from the pro-Zuma “premier league” lobby alongside North West and the Free State – is driving a quest for a unity candidate. Mkhize is top of the list.

Mpumalanga, after KwaZulu-Natal, will send the second most delegates to the ANC December conference. But its reach was felt already at the recent ANC policy conference, where Mpumalanga’s support for ANC Secretary-General Gwede Mantashe’s scathing diagnostics report meant it was considered despite the objections by the Zuma supporting KwaZulu-Natal, Free State and the women’s, youth and veterans’ leagues.

Perhaps this was a testing ground for the strength of Mabuza, said to be close to Zuma, and his province. But in the ANC, factional politicking that seems to come out against one faction may not necessarily indicate a definite change of heart. There are many factors involved, including grassroots sentiment and jockeying for posts.

Dlamini Zuma’s ANC presidential campaign seems to have become somewhat unstuck, organisationally. The prevailing popular take is that Dlamini Zuma is Jacob Zuma’s proxy and would ensure he’d not face trial on various charges. She also appears more comfortable in front of friendly audiences, but not so much when addressing one not constituted of ANC members. Speculation that she’s headed to Cabinet since her swearing in as ANC MP – she will serve on the small business development and arts and culture committees, according to the Announcements, Tablings and Committee Reports (ATC), Parliament’s record of work – is another twist in the complex long-term game.

Meanwhile, Mkhize was dropped from Ramaphosa’s CR17 slate. Apparently feedback to his campaign indicated that Ramaphosa with Sisulu as his deputy would be a winning ticket, according to an insider. However, Sisulu is playing her cards close to her chest.

The permutations are endless amid speculation on the ANC presidential contest, including that the conference will be made to collapse so Zuma may stay on as party, and country, president. The December national elective conference is just over 70 days away, and if one week is a long time in politics, then that time could be an eternity.

For Holomisa, an ANC elective outcome with Mkhize as president, or deputy to Ramaphosa, is simply a continuation of the current ANC direction. And for opposition parties like the UDM, that’s the gift that keeps on giving.

Once a rising star in the ANC, Holomisa was expelled in 1996 for refusing to apologise for claims that then public works minister, Stella Sigcau, the Transkei Bantustan leader deposed by the military under Holomisa, took a bribe.

In 1997 the UDM was formed, and recently celebrated its 20th anniversary.

While the floor-crossing in the early 2000s has had a damaging effect, the UDM remains one of 13 political parties represented in Parliament. Holomisa emerged as a key mover amid closer opposition co-operation there, largely around a coming together regarding the damaging impact of Zuma’s presidency amid the #GuptaLeaks and State Capture claims, and coalitions at local government level following the 2016 municipal poll. It was the UDM that approached the Constitutional Court for the right to have a secret ballot in the latest presidential no-confidence motion.

Upbeat about 2019 to boost electoral performance, Holomisa said: “We are investing more in youth and placing youths in various structures”.

But what happens in 2019 in no small measure depends on the ANC’s December national elective conference. And everyone’s watching. DM