Op-Ed: Meaningful engagement, not militarisation, is the way forward for Mashaba’s Johannesburg 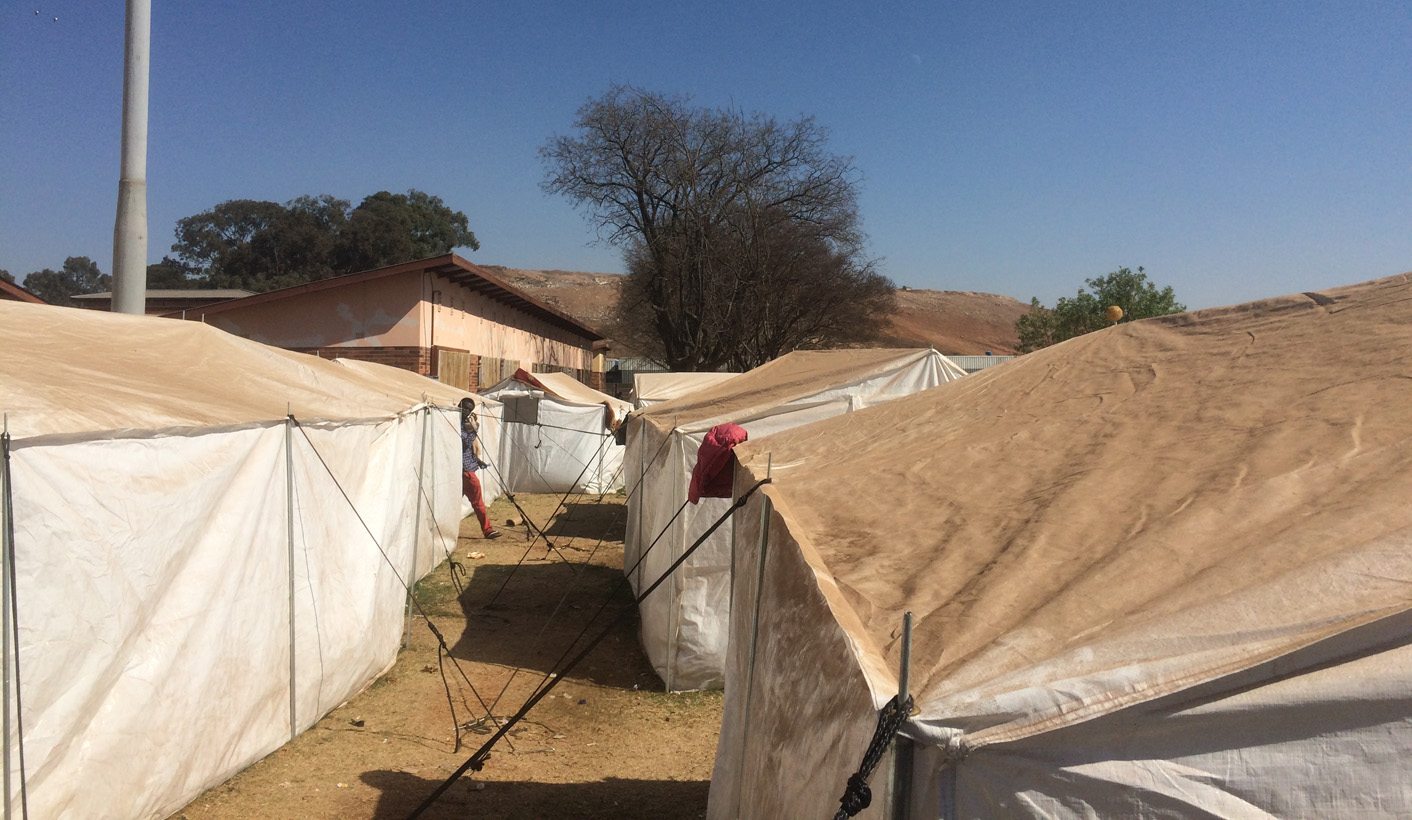 Herman Mashaba’s visits to so-called hijacked buildings shows engagement may be complex, but is not impossible and offers the best way forward for Johannesburg. By MATTHEW WILHELM-SOLOMON.

At the Wembley Stadium in Turffontein, southern Johannesburg, white tents shelter those who have been displaced by fire and eviction. South Africans and foreign nationals – Zimbabweans, Malawians, and Tanzanians – dwell here.

They are surrounded by Johannesburg’s landscape of waste: mine-dumps and mountainous landfill. Near the tents are the horse-tracks lined with fast food restaurants and gambling dens.

Beside the tents, those who were fortunate enough to have accessed formal alternative accommodation, last year, live in the old quarters for social workers: a decent brick building, with open cement kitchens and cleaning quarters.

But the city’s formal emergency accommodation is presently full or unready for more occupants, even while they are under court order to provide it.

He has inherited the city’s so-called “hijacked” or “bad buildings” – inner-city occupations in which thousands of inner-city residents live under often extraordinarily dire conditions. They live often in darkness with limited water, toilets and waste collection, and lack of electricity. These populations are constantly exposed to paraffin fumes and the persistent threat of fire.

These populations face, as in many other spaces of South Africa, social challenges of substance abuse, gender-based violence and crime. But they are also spaces where those excluded from the city’s urban regeneration schemes, and private rental markets, find refuge and home.

Hijacked buildings or spaces of refuge?

I have been conducting research in these occupied buildings for over five years. The terminology of “hijacking” is mostly misleading. Rarely are buildings in their entirety taken over by criminal gangs as the label and popular perception implies.

More often residential buildings slowly fall into dereliction or rates arrears, due to neglect or absent owners, leading to the cutting off of basic services. Alternately, abandoned industrial spaces are slowly occupied by those seeking shelter and refuge and cordoned off into informal settlements.

Where illegal rental is collected – and this is not always the case – it is often on the basis of a few rooms or a floor, often by former caretakers. Sometimes residents “own” their rooms without paying rental.

These buildings are occupied by both South Africans and foreign-nationals. They include informal workers and traders, musicians, carpenters, builders, blind and disabled migrants, sub-contracted cleaners, domestic workers, pensioners, children and the unemployed.

Photo: Rooms made of board within an inner-city occupied building.

Mashaba has promised to rid the city of these buildings, driving out unlawful occupiers and foreign nationals, through a use of “spectacular display of force” – involving increased evictions, and immigration and police raids.

Ironically, given that Mashaba rode to power on anti-Zuma sentiment, his rhetoric has remarkable continuity with Zuma’s Operation Fiela (or “sweep out the dirt”) launched in 2015 in which police and the military have targeted areas housing foreign nationals.

It also continues the more problematic elements of previous ANC Mayor Parks Tau’s reign – such as the attempt to clear out the city’s informal traders in Operation Clean Sweep – while abandoning Tau’s campaign against xenophobia.

Mashaba has blamed human rights lawyers for keeping populations in these dire conditions. There is, of course, an irony of pushing for law and order while attacking the legal process. Furthermore, the housing crisis is more about race and class, than nationality. It is primarily low-income black communities in Johannesburg, be they South African or foreign-national, who are continually subject to accident, exclusion, police raids and further displacement, as they have been throughout the city’s history.

There have been criminal gangs operating out of some, though not all, of these buildings. But while most residents are not involved in violent crime, they are often subject to it. Frequently they have little recourse to legal protection themselves, being labelled “hijackers” or migrants. This also makes them subject to police persecution and the frequent solicitation of bribes.

The city of Johannesburg needs to improve public security and policing, along with environmental health conditions. But this relies on trust, intelligence, and effective reporting. It relies on greater inclusion and engagement. The blanket targeting and criminalisation of the occupants of “bad buildings”, alienating large numbers of inner-city residents, be they South African or foreign, will not serve these ends.

Reliance on immigration raids and deportation will also not solve the problems of housing. Aside from the fact that foreign nationals have not caused the housing backlog, nor will their removal solve it, this does little other than perpetuate historical cycles of displacement.

Those with asylum seeking documents are entitled to live and work in the city. But the asylum system is hopelessly overloaded, inefficient, corrupt and bureaucratic. Many simply drop out without a fair hearing due to bureaucratic fatigue and prohibitive transportation costs to distant refugee reception offices, after the Johannesburg offices were closed down.

Most cross-border migrants living in occupied buildings do so because they have few other options to survive, and so many simply return to South Africa directly after being deported.

Mashaba is correct that he cannot deal with these issues alone – the support of national government and civil society is critical. But neither is it a solution to disavow the issue and retreat into military rhetoric.

In 2008, Justice Zak Yacoob wrote in a judgment in the Constitutional Court case known as “Olivia Road”, relating to an eviction case in Berea, that the municipal government was obliged to “engage meaningfully” the residents of the building to be evicted. This engagement was necessary to provide alternative accommodation to protect against homelessness, but also to improve living conditions in occupied buildings and to protect the Constitutional right to dignity.

Since then, prior to Mashaba’s election last year, there has been the slow expansion of emergency accommodation, mostly through continual court and civil society pressure, and the improved identification of high risk buildings. But the previous ANC governments and municipal administrations have not developed an effective strategy to engage meaningfully with precarious inner-city populations, either in eviction cases or more generally.

A case in point is the Cape York building where several residents died recently in a fire; the city has failed to provide basic services even when a court order was given.

To Mashaba’s credit, his Democratic Alliance government, with tacit support from the Economic Freedom Fighters, has committed to implement the Inner City Housing Implementation Plan (ICHIP) – aimed at building over the next several years, through municipal housing and subsidies, an additional 9,500 low-cost rental housing units accessible to low-income groups presently excluded from rental markets, and to expand emergency housing. This is a critical step as the private sector will not provide for these populations without state intervention.

Although the plan was developed under the ANC mayor Parks Tau, the ANC municipal government delayed in approving and implementing the plan.

In addition, Mashaba has being making the time (albeit with an entourage of police and media) to travel around the city find out what is going on. He is speaking to those who live in the buildings, listening to their concerns.

I have spoken to several residents of occupied buildings who have met with Mashaba. They have, for the most part, found him respectful and understanding of their problems. But they have been shocked and offended to hear the difference in his rhetoric when he speaks on radio or television.

It is this attempt to engage precarious inner-city populations, and not the strident and divisive polemics, that needs to shape city policy and practice.

There is a need to involve foreign-nationals, their organisations as well as wider civil society, in looking for housing solutions, and also to recognise their significant contribution to the city’s economy through trade and their vital role in Johannesburg’s cosmopolitan intellectual and cultural life.

Integrating foreign nationals into low-cost housing schemes should not mean they receive the majority of state benefits, but rather access, along with South Africans, to rental housing at affordable rates and emergency housing in critical situations.

There are of course political and resource constraints which need to be addressed. But a solution based on the continued marginalisation and “ghettoisation” of the poor in the post-apartheid city, be they South African or foreign national, could well foster violence, further social divides and perpetuate historical cycles of displacement.

Mashaba’s own visits to so-called hijacked buildings shows this engagement may be complex, but is not impossible. This engagement – and not militarisation – offers a way forward for Johannesburg. DM

Matthew Wilhelm-Solomon is a lecturer in the Department of Social Anthropology at the University of the Witwatersrand and an associate researcher of the Migration and Health Project Southern Africa. The views expressed are his own.