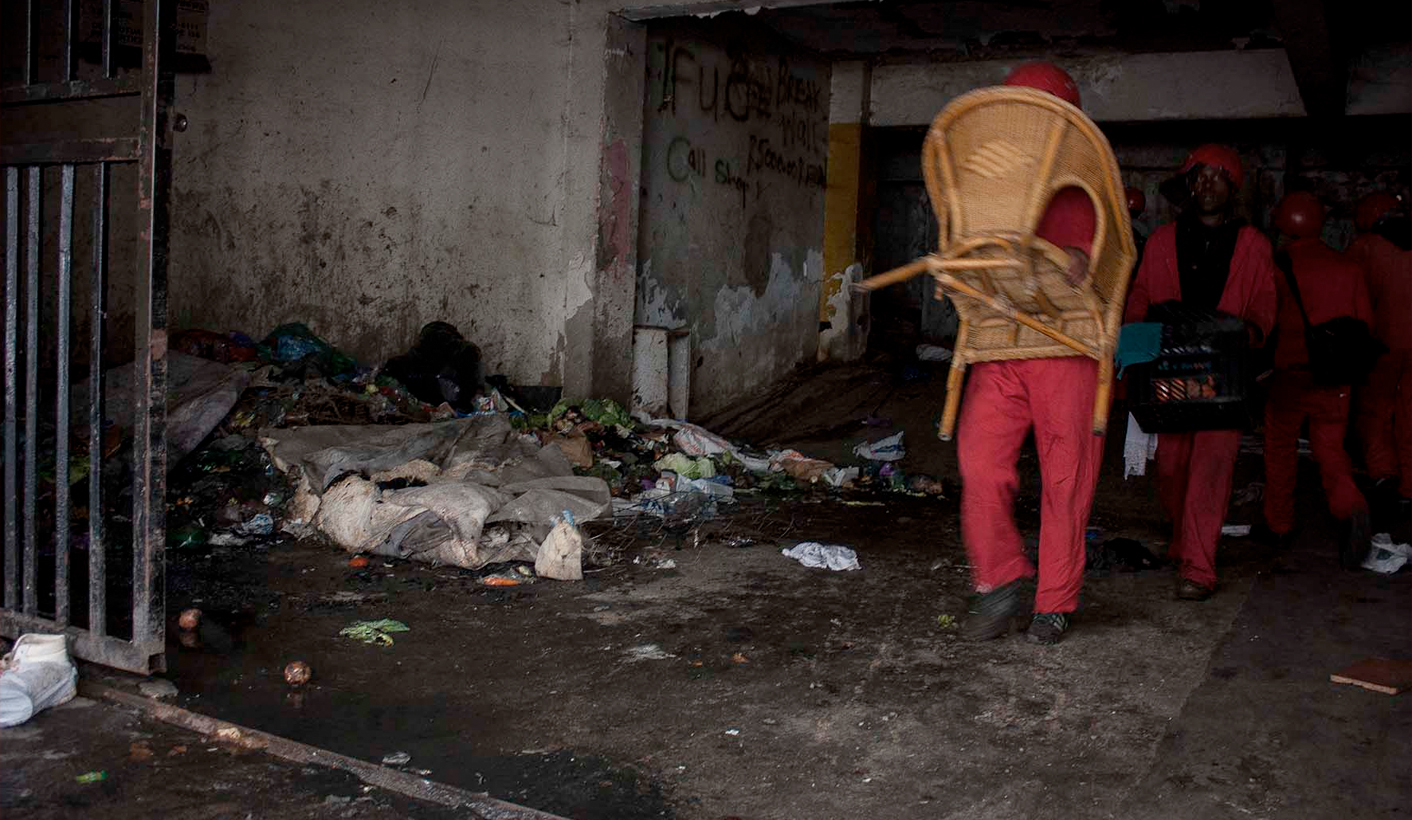 GroundUp: Red Ants turf residents out of Johannesburg building The legality of the eviction of inner city residents is under question. By Steve Kretzmann for GROUNDUP.

An entire inner city block was cordoned off in Johannesburg on Wednesday morning as workers from the Red Ant security company hauled people’s belongings out of the decrepit 12-storey Fattis Mansions on Harrison Street.

Hundreds of security guards, dressed in their signature red overalls and helmets, lined the intersections in front of the building, while others heaped beds, furniture and a wide variety of household items in the middle of the street as evicted tenants and owners looked on.

The once grand apartment block built in 1937 is marked by broken windows and soot stains from fires and paraffin stoves. There has been no electricity in the building since 2010, said resident Edward Phetlhane, and tenants gathered water from taps (believed to be fire hydrants) in the corridors.

While the building was visibly unfit for habitation, with the stench of refuse and sewage wafting out of the basement, it was nonetheless home to 168 people, according to a list held by Phetlhane, who represents the building’s tenants through Zwiegers Attorneys.

Although the administrators of the Fattis Mansions sectional title scheme, Jan van der Bos, and Fairvest Property Two, were granted an order by the Gauteng High Court on 25 April that all occupants were to vacate the property within 45 days (9 June), the order appears to be under appeal. That would make Wednesday morning’s evictions unlawful.

Photo: Fattis Mansions is in a terrible state but it is home to about 170 people.

A letter from attorney Howard S Woolf, representing “various owners of units in Fattis Mansions”, to the Johannesburg Central Sheriff was stuck to the outside of the graffiti-scarred building.

In the letter dated 17 July, Woolf states: “It appears that an eviction is scheduled for tomorrow, irrespective of the order having been appealed and an undertaking from the applicant that the eviction would not proceed.”

In another letter dated 17 July, addressed to the law firm Von Lieres Cooper Barlow & Hangone (VLCB), Woolf, acting on behalf of 31 occupants, notes that a previous eviction attempt occurred on 9 July and that VLCB’s clients “undertook to cease and desist with his unlawful conduct” because an appeal had been lodged. Woolf demanded an undertaking from the building administrators, by 18 July, that they would not carry out an unlawful eviction or receive assistance from a third party such as the police. The demand was not heeded.

Zwiegers Attorneys sent a similar letter, dated 12 July, to VLCB, noting the “unlawful and illegal attempt to evict the owners of the sections and/or occupiers” on 9 July. Zwiegers also demanded an undertaking that the administrators would not attempt any further eviction pending the outcome of the appeal.

GroundUp tried to establish whether the appeal had possibly been finalised on Tuesday in Van den Bos and Fairview’s favour, but neither Zwiegers’ nor Woolf’s cellphones were answered on Wednesday. VLCB partner Shaun Hangone said the attorney dealing with Fattis Mansions was on leave.

The High Court order being appealed allows for the administrators to rebuild the property, and is authorised to raise special levies to do so, with power to take legal action against members of the body corporate who fail to pay the special levy.

However, Justice Kometsi, who was one of the owners being evicted, said he bought his apartment in the building under a state subsidy in 1999 and has paid it off in full. He said he had not been given an eviction notice to move out of his own apartment. He said his wife called him while he was at work to tell him their belongings were being carted onto the street. He said the electricity was cut off by City Power in 2010 after the building management neglected to pay the bill, and although “a lot of crooks” moved into the building, the owners chased them out. “We took care of them,” he said.

Photo: Residents’ belongings were dumped on the street.

Kometsi, along with a number of other evicted owners and tenants, also alleged the Red Ants stole belongings such as cellphones and other small valuable items as they carted them out of the building. This has been a frequently made allegation against the Red Ants in recent evictions.

At least two women approached a Red Ant security official, who they addressed as Mr Van Rooyen, to complain about the guards stealing their belongings. But Van Rooyen, who would not provide his name to GroundUp, was dismissive, telling them: “Guard your own stuff”.

A number of evictees said they were also worried about the “nyaope boys” stealing their goods after the Red Ants had left.

Kometsi and his wife Maggie said they didn’t know where they were going to find shelter on Wednesday night. Midwinter temperatures were predicted to drop close to zero.

The ward councillor, Nokuthula Xaba, when contacted on Wednesday afternoon, said she “wasn’t aware” of the eviction. “They (human settlements) haven’t spoken to me yet,” she said.

Spokesperson in the mayor’s office, Tanya Heydenrych, said the eviction was a result of a court order and the City was only involved in organising the Johannesburg Metro Police Department to cordon off the streets. DM