Makhosi Khoza: If I get fired from the ANC, I won’t disappear into obscurity 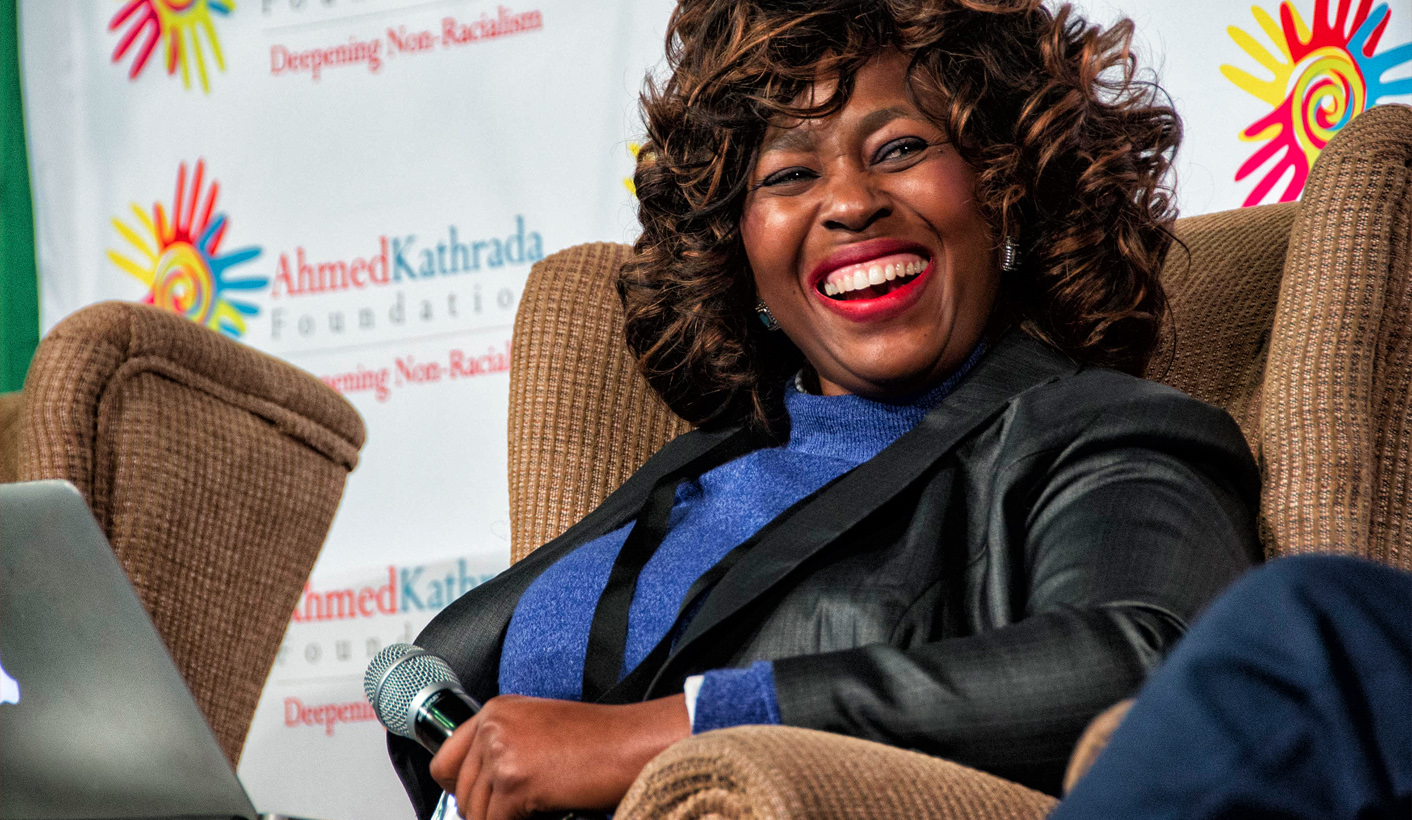 Three weeks ahead of her disciplinary hearing by her party, rebel ANC MP Makhosi Khoza has made it clear that she would not “cross the floor” to any other political party – or disappear into obscurity. She also revealed why she thinks the ANC is trying to knock National Disciplinary Committee head Derek Hanekom off his post, and what she really thinks of the ANC Women’s League. By CARIEN DU PLESSIS.

Outspoken ANC MP Makhosi Khoza has had a really good run in the media of late, starting with her stance against President Jacob Zuma ahead of Parliament’s vote of no confidence on 8 August. He was spared, but for the first time a number of ANC MPs voted with the opposition against him.

Khoza had been using her social media platform on Facebook to speak out after receiving death threats, she said, because she wasn’t getting any help in the party.

If she spoke out, at least people would know what had happened should these threats came true.

On Monday afternoon Radio 702 invited her to their studios for a live interview with talk show host Azania Mosaka in front of an appreciative audience as part of its Women’s Month special broadcasts.

She is set to appear before an ANC disciplinary hearing on 10 September, and many have been asking whether she would go to the Democratic Alliance or the Economic Freedom Fighters if she were to be suspended from the party.

Her response: “I will never go to the DA. I don’t agree with the policies of the DA,” she said. “It’s premised on protecting minority interests as opposed to protecting the rights of all citizens of all South Africa. That’s my perception of them.”

And the EFF? “I will never go to the EFF, because I believe the EFF is coming up with their policies – I’m also an economist – they are still pursuing policies that have been tried over and over again and they have failed. And I honestly don’t think I can associate with the EFF.”

She gave the assurance that, should the ANC fire her, “I will not disappear into obscurity, because you women, you will support me,” she said, looking at the applauding audience.

“I am ready to tackle them head-on. We need to defend our country, we need to ensure Africa is not synonymous with corruption,” was her closing salvo.

The whole interview was full of similar salvos. One of them was shot at the ANC Women’s League, of which she said she would not be a member “for very obvious reasons”.

Khoza said she was “ashamed” of the league’s president, Bathabile Dlamini, who came from the same town as her. “In fact, when she came to the office, I was ANC Women’s Desk organiser,” Khoza revealed, without giving dates. “I’m surprised at the way she has retrogressed,” she said, citing Dlamini’s support of former deputy higher education minister Mduduzi Manana as an example.

Manana resigned over the weekend after he was caught on social media beating up a woman outside a restaurant after having an argument.

“I think it is pathetic, I think women of substance in the ANC must rise up and reclaim the space of Charlotte Maxeke and Lilian Ngoyi,” she said, with reference to two of the heroes of the ANC women’s struggle.

She said the patriarchal system was well-entrenched in the ANC, and those who don’t challenge it got more recognition than “women like myself, who are feminist”.

Higher education minister Blade Nzimande and former finance minister Pravin Gordhan had spoken out on similar issues as she had, but Khoza claimed she was only being targeted because she was a woman.

Khoza also said she was removed as ANC spokesperson after she spoke out, in 2011, against Msunduzi mayor Alpha Shelembe. He was removed before the elections, but later “promoted” by the ANC collective, she said.

She was sent to Parliament in 2014 because ANC members had voted for her, even in absentia, to be on the ANC’s list.

Khoza said, to applause, that speaking out against Zuma meant she was “siding with the people as opposed to siding with a president who is corrupt, who believes that women are just objects to be collected”.

She agreed that discipline was important in an organisation, but said she felt the ANC was betraying its mission.

It was “painful”, however, to be “kicked out of [my] own home”, she said, because “the ANC is my political home, and I am not a floor-crosser”.

She said she believed the ANC was taking steps to remove Derek Hanekom as head of the National Disciplinary Committee before her appearance in three weeks’ time as this was “linked with suppressing the [critical] voices”.

In this regard, Khoza said, the ANC was still in an “underground politics” mode where “we operated as though we were in the military”, through instructions from the top that should be carried out without question.

“Democratic centralism is not necessarily a bad concept,” she said, “but it depends on who is in the leadership and what are their motives.”

A lot of people, for instance, were implicated in the #GuptaLeaks emails and nobody wanted to bring the other one down because it would mean all the leaders had to go. “So the best thing for them to do is to suppress those who are trying to bring the ANC back to its former glory, to its old moral path.”

Asked whether she had a personal relationship with Zuma, Khoza said she didn’t, but added, “I don’t think he knows I was brought up by MaMzobe, the same person who brought him up, the same surname.”

If he knew, “he would probably say we are being too harsh, because if you are his relative, you get treated better”.

He was now the reason she was removed as head of the Portfolio Committee on Public Service and Administration last week, she said. “Part of the reason I am being fired is because they don’t want to tackle the big elephant in the room.” DM

Photo: ANC MP Makhosi Khoza addressed the gathering at The Conference for The Future of South Africa at the Rhema Bible Church in Randburg on Tuesday, 19 July 2017. Photo: Ihsaan Haffejee