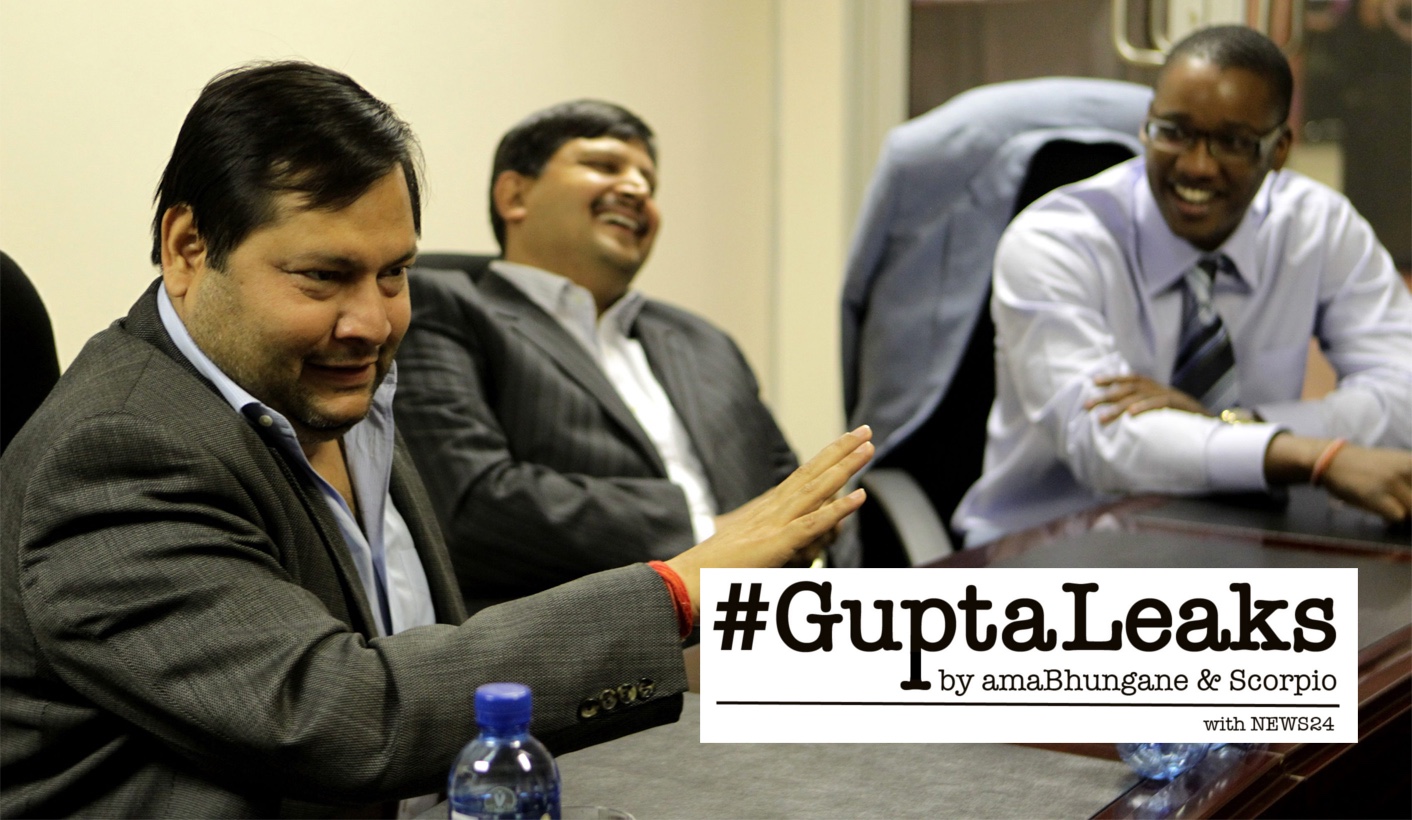 The #GuptaLeaks have finally solved the mystery of the blue light vehicles that illegally ferried hundreds of guests to the infamous Sun City wedding extravaganza in April 2013. By NEWS24.

One of the enduring riddles from the GuptaGate scandal was the identity of “S&M Transportation”, an unregistered company that was found in a government probe to have billed the Guptas for the provision of vehicles illegally fitted with blue lights to escort the family’s guests between Waterkloof Air Force Base and Sun City.

We can now reveal that the vehicles belong to the same businessman that helped the head of the Presidential Protection Service (PPS) to buy a house. The vehicles used during the audacious stunt were provided by Phineas Manthata, the owner of Instrumentation for Traffic Law Enforcement (ITLE). Manthata’s company is a supplier of blue lights to various units of the South African Police Service (SAPS).

This follows our revelation last month that Manthata in 2012 contributed R700,000 towards the purchase of a house by Major-General Muzingaye Mxolisi Dladla, the head of the police’s PPS. Dladla is a staunch ally of President Jacob Zuma, while his police unit happened to be a major client of Manthata’s company.

Dladla himself also has ties to the Guptas. He once listed a property owned by one of the Guptas’ companies as his residential address and Rajesh “Tony” Gupta, the youngest brother, admitted under oath that he turned to Dladla for assistance with transportation to Sun City.

This poses the question: did Dladla knock on the door of Manthata, his personal benefactor and the supplier of his unit’s blue lights, after the Guptas had asked him to help them secure blue light transportation?

In May 2013, as the public outcry over the Waterkloof landing was raging, the government’s Justice, Crime Prevention and Security (JCPS) cluster announced that black BMWs with illegally fitted blue lights used for the Gupta cavalcades were hired from “S&M Transportation”.

“A criminal case has been registered against the owner for illegally using emergency lights and fitting false registration plates,” then justice minister Jeff Radebe stated on behalf of the JCPS cluster.

The JCPS cluster’s report on the Waterkloof landing later affirmed that “S&M Transportation” had broken several laws. Apart from the illegal blue lights and the false number plates, the company rendered security services without being registered with the Private Security Industry Regulatory Authority (PSIRA), as required by law.

“S&M Transportation” wouldn’t have been able to register with the PSIRA, seeing as the company was not registered. There is no trace of the company on the Companies and Intellectual Property Commission’s (CIPC) database and, according to a Google search, the only company bearing that name is located in Shelbyville in the US.

“It was also determined that an individual working for a bogus company had invoiced Mr Tony Gupta for the sum of R512,000 for protection services. Criminal investigations are taking place in all of these cases,” according to the JCPS cluster report.

The identities of the individuals behind “S&M Transportation” were never revealed, however, and the criminal probe appears to have come to naught.

The SAPS did not comment on our queries about the outcome of the probe.

Thanks to the #GuptaLeaks emails, News24 could finally confirm the identity of the mysterious blue lights supplier.

In July, we published a story on individuals in the Presidency and other government officials who had close dealings with members of the Gupta family or their associates.

Among these officials were Dladla and his previous partner, Mogotladi “Mo” Mogano, a chief director in the office of the deputy president.

The report referenced an affidavit contained in the leaked documents that had been made to the police by Rajesh Gupta in the wake of the Waterkloof debacle.

The youngest Gupta brother stated in the affidavit that he had requested Dladla to “advise” him on matters relating to “road transport security” for the wedding.

“I am aware of an initiative within the South African Police Service where members of the public can insist on protection/control services at a prescribed fee and at a prescribed rate,” reads the affidavit.

“I expected an invoice from the South African Police Service for the [blue lights] services rendered on my request,” Gupta added.

But when Gupta was finally billed for the security services, it was by one Salome Manamela from “S&T Transportation”, not from the SAPS.

Gupta claimed that he had no idea who Manamela or “S&M Transporation” was, and that he had provided the invoice to the police officers assigned to investigating the use of illegal blue lights and other transgressions related to the Guptas’ security escorts.

Manamela has denied that she had sent the invoice to Gupta, or that ITLE’s vehicles were used for escorting the Guptas’ wedding guests.

But a source familiar with Manthata’s business dealings confirmed that the two BMWs and the Golf GTIs mentioned in the JCPS report were indeed ITLE’s cars. The source also recalled how police officers visited ITLE’s business premises in Midrand after the Waterkloof debacle. The officers were looking for the fake number plates that were fitted to ITLE’s BMW’s, but these were apparently never found.

The invoice for R512,000 is attached to an email contained in the #GuptaLeaks. The invoiced amount corresponds exactly to the amount mentioned in the JCPS cluster report.

“Kindly find attached invoice for attention,” Manamela had written to Gupta in April 2013, from a Yahoo email account.

The attached invoice for “S&M Transportation” stated that the Guptas owed the “company” R512,000 for “escort services” between OR Tambo International Airport and Sun City, and between Waterkloof and Sun City.

After the publication of our report that mentioned Manamela’s name, and while News24 was busy investigating the R700,000 payment made by Manthata to Dladla, the above-mentioned source told us that Manamela is Manthata’s personal assistant.

We then traced the cellphone number on the invoice that Manamela had sent to Gupta. The trace not only revealed that the number belonged to Manamela, but also showed that she had listed ITLE as her employer on credit records.

‘Not my email, invoice’

Dladla, in an earlier response to our queries, denied that he’d been involved in the Waterkloof debacle.

“I did not attend the Gupta wedding in Sun City nor was I part of any logistic arrangements either at Sun City or at Waterkloof Air Base,” Dladla had claimed. He did not respond to our queries for this article.

The Guptas and Manthata also failed to respond to our queries.

Ellis confirmed that Manamela had been working as ITLE’s “accounts executive” since 2013, but he claimed that his client’s details were fraudulently used for the invoice sent to Tony Gupta.

“Our client is extremely indignant and outraged that her identity has been misused and tenders her full co-operation to clear her name. This includes making her bank statements available for inspection and agreeing that Yahoo may be approached to provide detail on the generation of the email address utilised in the email and to release, for consumption, all emails sent to and received from the aforementioned email address,” added Manamela’s lawyer.

Manamela also denied that ITLE’s vehicles were used for the Waterkloof operation, but she admitted that police investigators came to the company’s premises in the days after the debacle.

“It is correct that the SAPS, during the course of a general investigation, which targeted a number of companies, attended ITLE’s offices and subjected the company to an informal and impromptu investigation, during which time the records and electronic data of the company as well as our client’s personal records, was subjected to inspection,” said Ellis.

“Our client does not know what suspicions were raised to provoke the investigation but what she can say is that after the inspection was concluded, it appeared to our client that the SAPS was satisfied that neither she nor ITLE enjoyed any relationship with the Guptas,” Manamela’s lawyer added. DM

Do you have information for our investigative journalists? Send an email to [email protected].