SCORPIO: In addition to his R30m Eskom pension bonanza,... 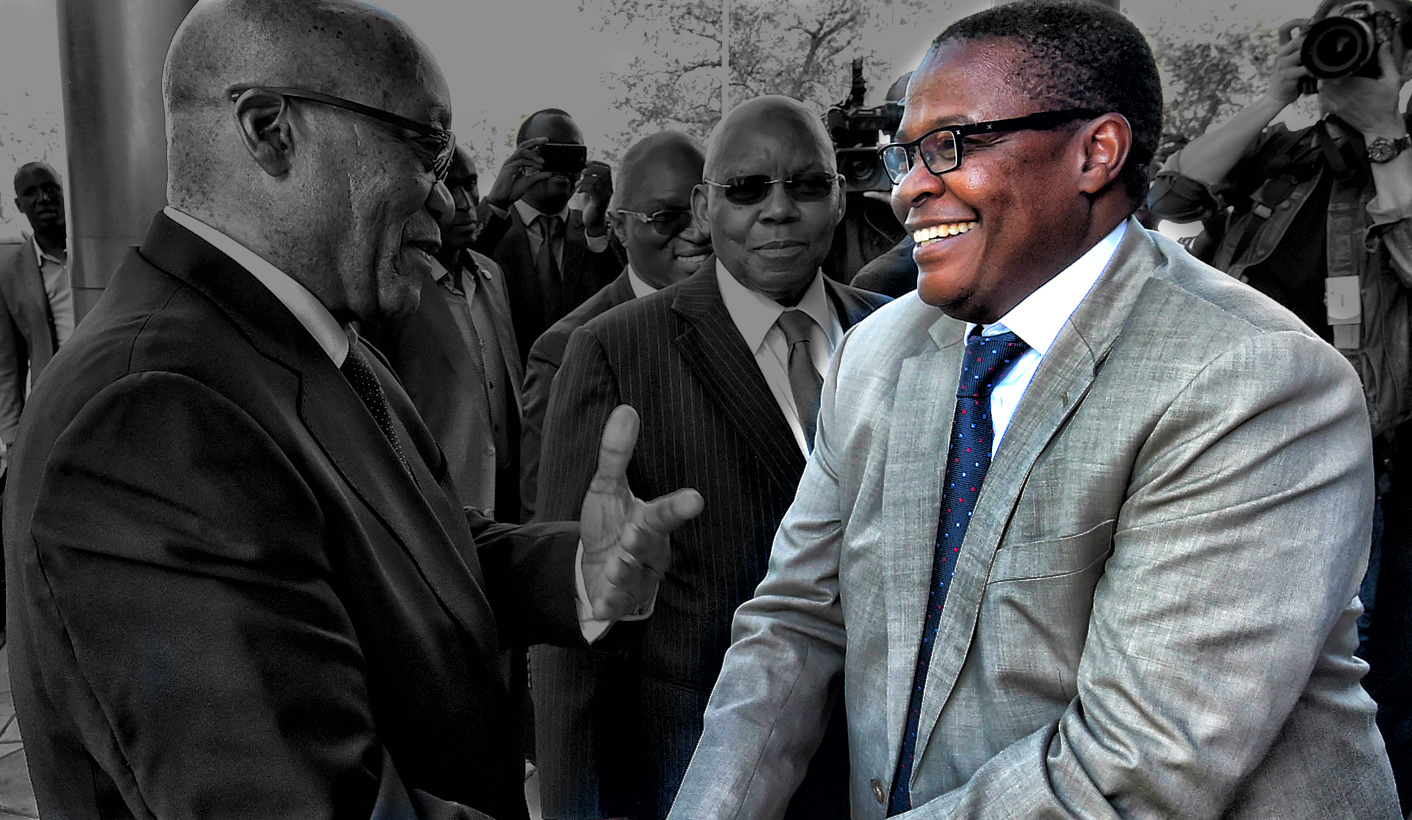 The story of the R30-million pension bonanza granted to Eskom’s former CEO Brian Molefe is one of greed and mismanagement. Last week Scorpio revealed how officials lied, schemed and defrauded the public in order to allow Molefe a pension calculated as if he had ten years' service at Eskom and worked there for 156 months. In reality Molefe contributed 15 months’ pension payments to the Eskom Pension and Provident Fund with the cash-strapped Eskom picking up the tab for the shortfall. This while Molefe wasn’t eligible to be a fund member to start with. But wait, there’s more: Based on another series of leaked emails, Scorpio can reveal that by a sleight of hand the tax man was scammed out of R1,3-million. By PAULI VAN WYK.

The Eskom Pension and Provident Fund is to Brian Molefe what Bonnie was to Clyde. Frank “The Enforcer” Nitti to Al Capone. Mrs. Lovett to Sweeney Todd. In Molefe’s case, the fund was the enabler and appears to have allowed itself to be dictated to by Eskom and Molefe.

The evidence in Scorpio’s possession will show that Molefe’s pension payment was incorrectly taxed, allowing him to get an unlawful R1,3-million tax discount. The South African Revenue Service (Sars) did the calculations based on information incorrectly provided by the Eskom Pension Fund. The documentary evidence in Scorpios’s possession does not reveal any intention by the fund to defraud Sars or that it did so at Molefe’s request.

During a 49-minute telephonic conversation with Molefe on Thursday, 13 July, he claimed not to have known about his grand tax discount.

“But it doesn’t matter, it is before the filing season, Sars will reconcile everything and tell me what is outstanding.”

However, the body of evidence shows that the Eskom Pension Fund was either aware of, or should have known:

But when the media demanded answers in May, the Eskom Pension Fund didn’t come clean and rather chose to mislead and lie repeatedly on at least two occasions in order to obfuscate the facts. The safety net failed spectacularly.

It happened like this: In November 2016 Molefe was “retrenched” in terms of “Rule 28” of the  Fund. He lied about the reason he was leaving Eskom, saying it is in the “interests of good corporate governance” after then Public Protector Thuli Madonsela provided evidence that Molefe was in continuous contact with Gupta Inc. at critically important times. The evidence revealed by Scorpio last week shows that Molefe was actually planning his retirement from the moment he started working at Eskom. Consequently, a defined pension benefit was calculated that stunned South Africa: an estimated R30-million pension which included monthly payments to the 50 year old Molefe as long as he is alive, after which the payments would be transferred to his 31-year-old wife for the rest of her life. Molefe only worked for 15 months, but his pension benefit was calculated as if he worked for 156 months (until he was 63) and had a 10 year service record.

Being “retrenched” was the only option that allowed Molefe immediate access to his pension. If he decided on any other option, he would have had to wait for at least another five years. So in February 2017 Molefe received a lump sum of R9,767,743.68 – it calculates to a third of his total defined pension benefit cost. Pension payouts are taxable, and Molefe’s tax was calculated to an amount of R1,974,975.77 which was duly paid to Sars.

Except, the tax payment is R1,3-million off the mark.

Scorpio consulted with a lawyer specialising in tax and pension funds to review our documents and findings. The source cannot be named because the specialist works for government. Fact checking whether the calculations done to rack up the R30-million pension were correct, the source also used information and formulas provided by Sars to re-calculate the tax payable. According to the tax specialist, Molefe was supposed to pay R3,268,887 in tax, not R1,9-million.

The deception was cunning: Molefe accrued a pension benefit of R4,281,699,87 at Transnet in the four years he worked there from 2011 to 2015. This amount was duly transferred by Momentum (who administers Transnet’s pension fund) to the Eskom Pension and Provident Fund.

Eskom documents tell us that this amount was “exempted from lump sum tax” when it was transferred from one approved pension fund (Transnet) to another approved pension fund (Eskom). If one accepts that Molefe was truly “retrenched” and that all the Fund rules were adhered to, the R4,2-million from Transnet should have been added to the final calculations to determine the (what we now know is illegal) R30-million pension fund cost and the big sum should have been taxed in total. Except, it wasn’t.

Instead, the Fund classified the R4,2-million as Molefe’s “contribution to the fund (that) have exceeded such amounts as ranked for deduction against income”.

It means that the Fund made Sars believe Molefe paid R4,2-million over and above his monthly instalments. The result was that Sars regarded it as a sum that was not to be taxed.

You are allowed to be confused. Scorpio also double and then triple checked the facts before publication. But the Fund did nothing to clear the confusion. In fact, they tried to obfuscate their own failings and culpability.

In April 2017 minister of public enterprises Lynne Brown ordered the Eskom board to rescind their decision granting Molefe’s request to leave and awarding him with the R30-million pension payout. The board weighed up their options and decided to re-employ Molefe as Eskom CEO. At first Brown agreed to this plan, but then again rescinded Molefe’s re-employment in May 2017.

In the meantime, the Fund found itself between a rock and a hard place. The details around Molefe’s pension fund were being scrutinised, the EFF and DA initiated litigation regarding his reappointment, the media was knocking on their door and several investigations were launched.

It prompted the Fund to publish two press releases in two consecutive days in May. This month its spokesperson Amukelani Maphophe declined twice to answer Scorpio’s fresh questions, referring us to the May press releases.

On May 16 the Fund’s Chief Executive and Principle Officer Sibusiso Luthuli assured the media that the Fund “will not do anything that will jeopardise the financial soundness of the Fund or unfairly favour a member at the expense of other [Fund] members by giving them benefits that are not due to them in terms of the rules”.

But it is exactly how Molefe was treated: He unfairly benefited from a myriad “mistakes” made by the Fund. The Fund didn’t alert Eskom to the fact that Molefe was classified as a “temporary” employee and is therefore not eligible to be a Fund member. The Fund did not pull up the hand break when Eskom wanted to “retrench” its CEO. The Fund did not raise the alarm when Molefe consequently took early retirement at age 50, instead of 55 as stipulated in the Fund’s rules. Officials at the Fund provided misleading information to Sars, resulting in a huge tax reduction for Molefe. The Fund did also not report all irregularities, including Molefe’s lies, to the Hawks as stipulated in section 34 of the Prevention and Combating of Corrupt Activities Act (Precca). The Act stipulates that anyone in a position of authority with knowledge of wrongdoing is obliged to report it to the relevant authorities, or be in contravention of the Act themselves.

This week the current Public Protector Busisiwe Mkwhebane announced the launch of a probe into Molefe’s pension fund woes. Parliament will also investigate the matter. The DA’s and EFF’s litigation relating to Molefe’s return to Eskom is still pending.

The Sars, Hawks and the National Prosecuting Authority will also find themselves under renewed scrutiny as South Africa waits for these authorities to announce an investigation. Their lack of action stands in stark contrast with the alacrity with which the Hawks hounded former finance  minister Pravin Gordhan and the haste in which the NPA charged, and then uncharged, him. DM