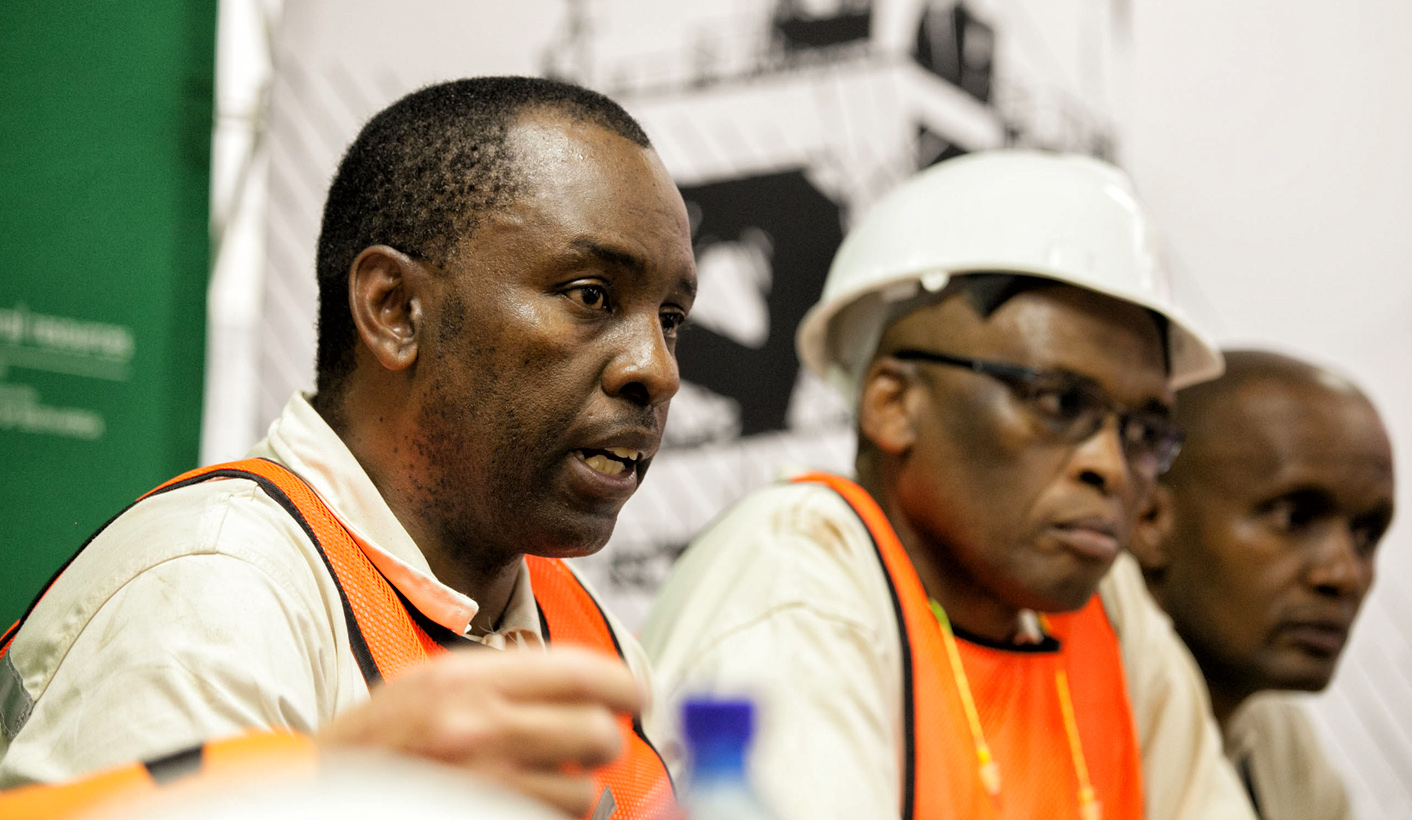 Mineral Resources Minister Mosebenzi Zwane has claimed that the third Mining Charter will promote transformation, the economy and jobs. But the mining industry has bled jobs in recent years – and the charter might accelerate the decline. By GREG NICOLSON.

Sibanye Gold dismissed over 1,500 miners last week at its Cooke operations for participating in an unprotected strike. Unions are outraged and the National Union of Mineworkers (NUM) has committed to “pulling out all its available resources to fight this barbaric and anti-worker attitude”, calling mining companies capitalist barbarians who are trying to divide workers. The union claimed 2,000 workers were dismissed.

The dismissals relate to Sibanye’s policy to tackle illegal mining. It’s cracking down on employees who assist illegal miners and has arrested a number of staff members. There’s been intimidation and violence. Sixteen employees were seriously assaulted. NUM alleged its rival the Association of Mineworkers and Construction Union (Amcu) bullied its members into joining the strike and all were paying the costs.

Sibanye’s story is company-specific, but headlines on mining dismissals have become common in recent years. There’s fear the revised Mining Charter, gazetted last week, could worsen the problem. The Chamber of Mines claims the industry lost around 70,000 jobs between 2012 and 2016, with both commodity prices and net investment in decline. The industry has been volatile and might get worse.

Mineral Resources Minister Mosebenzi Zwane has been summoned by the ANC’s economic transformation committee to explain the new charter:

“The ANC is very concerned about the impact legislation could have in terms of employment, given that the mining sector lost 60,000 jobs over the last five years,” said the ANC’s Zizi Kodwa. “So, if there’s 30% black ownership it mustn’t lead to a jobs bloodbath.”

In 2016, the mining industry directly employed over 450,000 people. “The future of their jobs is now in doubt. Zwane and [President] Zuma’s grasping charter will be to blame,” said the DA’s James Lorimer, claiming the new charter was meant to enrich cronies.

The Chamber of Mines will go to court to interdict the new charter, claiming Zwane barely consulted the industry before he introduced the new regulations on Thursday. The charter requires mining companies to raise black ownership levels to 30% within a year, up from 26%. It also introduces a number of other changes and rejects the “once empowered, always empowered” principle, effectively requiring companies to top-up black ownership to 30%, even if they have achieved quotas but then fall below the mark.

The Chamber argues that the new regulations will limit an industry that’s already been in decline and ultimately risk the jobs of mineworkers and those in supporting industries. “Ladies and gentlemen, this is serious,” said Chamber of Mines president Mxolisi Mgojo after the charter’s release. “We’ve had uncertainty up until now and this charter introduces a lot more uncertainty.” He claimed the charter could “kill the goose that lays the golden egg”.

A briefing note from Cliffe Dekker Hofmeyr said it “will have major implications for our clients in an already fragile economic environment, particularly as it follows the recent third credit downgrading for South Africa”. Commodity prices might be likely to improve, but further job losses in the sector could still be on the cards.

“The Mining Charter in its current form makes no sense. Crimping profits to make new empowerment targets inviolably successful only hurts the ability of the mining sector to sustain itself, much less grow. And that will mean jobs,” commented mining journalist David McKay, noting recent job losses. “Expect that figure to grow even whilst lawyers, courts, governmental departments and mining companies haggle over this latest ideological impost.”

In an editorial on Sunday, Zwane claimed the charter would provide long-awaited certainty in the sector. He said it was designed to promote transformation and broaden the participation of black people in the industry. “For this, we offer no apology. South Africa needs a radical economic transformation push that will act as a catalyst for economic growth, job creation and broader participation in key sectors.” He claimed those opposing the regulations were trying to protect middle-class interests and resist transformation. He said little on the possible effects the charter could have on the economy and jobs.

NUM pushed for higher transformation targets than were included in the charter, but it welcomed the increases Zwane introduced. Regarding ownership, the new charter says that of the 30% which must be black owned, 8% must be owned by employees. NUM called it “an overwhelming shift from the previous charter”, although the union wanted 10% ring-fenced for employee ownership.

NUM has condemned the Chamber’s reaction and also warned those talking about potential job losses. “The linkages to jobs is worrisome because from where we are sitting there should not be any correlation or linked job losses unless [the companies] would want to use employees as a bargaining chip,” said NUM transformation head Luthando Brukwe. Going to court shows the Chamber is against transformation, NUM said. It is planning to picket when the Chamber takes the department to court.

Zwane claimed the consultation process ahead of gazetting the revised charter was broad and sufficient. The minister on Sunday said consultation doesn’t automatically translate into accepting submissions, “especially those that object to provisions of the charter which we deem fundamental to advancing radical economic transformation”. It’s clear the relationship between the industry and Zwane’s department of mineral resources (DMR) has broken down.

For jobs, that’s worrying. The Chamber’s members by value represent 90% of South Africa’s mining industry and its leaders expressed frustration at how the latest third charter was drafted, especially in comparison to the two previous versions. The Mining Industry Growth Development and Employment Task Team (Midgett) was established to bring stakeholders together but has become latent under Zwane. The Chamber said it hadn’t met the DMR for two months before the new charter was gazetted.

The courts will determine whether there was sufficient consultation on the charter, but snubbing business will probably hurt both growth and jobs, at least in the short term. While struggling with market conditions such as depressed commodity prices and increased operating costs, mining companies have also been hampered by regulatory uncertainty. The future of the Mineral and Petroleum Resource Development Amendment Bill is still unclear.

Finance Minister Malusi Gigaba recently noted mining’s slow growth as a key source of pain for the economy. He noted mining’s improvement in the first quarter of 2017, but the Chamber claims the figure is misleading as an indicator of progress. Neither employment nor investment is improving. “Continued mining policy uncertainty and allegations of regulatory malfeasances within the minerals regulatory authority will continue to undermine recovery,” said the Chamber’s lead economist Henk Langenhoven earlier in June.

Gigaba noted the concerns over the charter and urged Zwane to engage the industry. He has repeatedly called on stakeholders in South Africa’s economy to work together to boost growth and help provide jobs, but that’s been undermined by Zwane’s decision to ignore processes like Midgett and frustrate a sector that’s been in decline and has been shedding jobs.

The revised charter has been supported in some quarters as a tool for radical transformation that aligns mining to other sectors that already have a 30% black-ownership target. At least in the short term, however, it looks likely the charter and the way it was introduced will lead to continued job losses in mining.

The headlines will probably turn from more specific job losses, like those at Sibanye, and back to broader cuts in the industry. DM