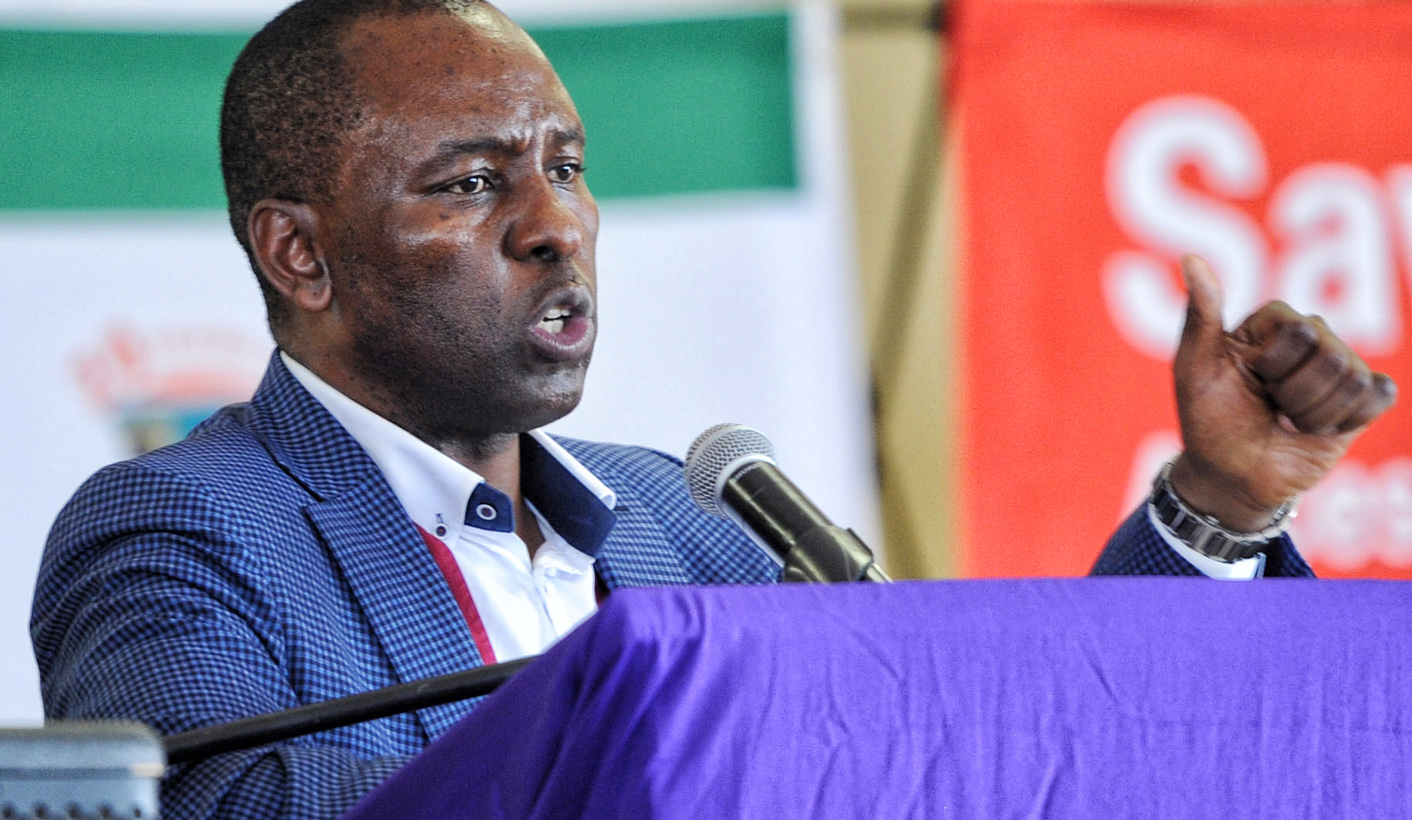 Radical economic transformation has arrived. Mineral Resources Minister Mosebenzi Zwane’s new Mining Charter on Thursday introduced unexpected pro-transformation measures. But are they legal? Will they kill the sector? And how will they be monitored? By GREG NICOLSON.

At mining’s negotiating table, everyone agrees on one thing: The industry needs to transform. Mining had a brutal colonial and apartheid history, which bled into tragedies such as Marikana. Mines are still predominantly white-owned, as are many of the companies that supply and serve them. Workers, despite wage increases, still struggle with the consequences of the migrant labour system, and communities live in poverty above valuable mineral resources. Then there’s the economy. It’s in recession and the country’s minerals could promote growth.

Mining needs to transform. The question is how. How fast.

Enter the Mining Charter. It guides the industry on transformation and social development. “This Mining Charter we present to you today is a key instrument for radical change, designed to address many of the inequalities in the mining and minerals sector prior to 2002,” said Mineral Resources Minister Mosebenzi Zwane in Pretoria on Thursday. He was introducing the third edition of the charter. “This is a task that cannot be taken lightly.”

Zwane, whose links to the Gupta family have been further exposed by the #GuptaLeaks, mentioned the need to “radically advance the meaningful inclusion and participation of all South Africans in the economy”, calling his Mining Charter a “revolutionary tool”. His speech was titled “Mining Charter 2017: An instrument of change: Giving practical expression to radical economic transformation.” It was the policy to match the political rhetoric.

Zwane’s charter introduced a number of changes. The first is on ownership. The revised charter said companies must be 30% black-owned, up from 26%. It also introduced ownership apportions. Companies must divide the 30% between black entrepreneurs, who will take 14%, employees, 8%, and communities, 8%. Companies which already have 30% black ownership will be exempt from apportioning.

Crucially, all companies will have to top up BEE ownership to 30%, regardless of whether they previously met targets. That’s about the issue of “once empowered – always empowered”. Companies have been debating the matter with the department of mineral resources for years and the minister bypassed those conversations.

The new charter says all boards must be 50% black, previously 40%. Companies applying for prospective mining rights must feature BEE ownership of 50% plus one person. All companies must pay their BEE shareholders 1% of revenue before they pay any distributions to shareholders. That 1% is over and above dividends owed to BEE partners and would amount to billions of rand. The revised charter also increases the requirement on companies to procure goods and services from black companies. They must get 70% of goods, up from 40%, and 80% of services, up from 70%, from BEE companies.

The Chamber of Mines was livid. It will go to court to interdict the implementation of the charter and to take it on review. It will also apply for a declaratory order in relation to “continuing consequences”, the Chamber’s phrase for “once empowered – always empowered”.

The first issue is consultation. Newly elected Chamber of Mines president Mxolisi Mgojo said they were included in drafting previous charters but hadn’t met the department of mineral resources during the last two months and knew nothing of many of the provisions introduced in the charter announced on Thursday.

“This process that the department of mineral resources embarked on is their own unilateral process,” said Chamber of Mines CEO Roger Baxter. “We’re not going to sign a document that we’re not committed to.” Companies must adhere to the charter, but, essentially, it’s up to them to implement it. By value, the Chamber represents 90% of South Africa’s mining companies.

Mgojo said there were “brightly flashing red lights” in the charter. He noted the ownership regulations and the 2% of turnover that will be levied to establish the Mining Transformation Development Agency. The Chamber questioned that levy, meant for skills development, and said the Mining Qualifications Authority, which already exists and has a governance structure, should rather be fixed.

On the provision for local goods and services, Baxter said it will be “extremely difficult to achieve”. The Chamber disagrees with the requirement for companies to keep topping up their BEE ownership levels, now at 30%. They say companies entered into deals with BEE partners in the past in good faith, can’t control whether they sell their stakes, and shouldn’t repeatedly be required to meet the costly standard of topping up BEE ownership if they’ve met it before.

Figures from 2016 released by the Chamber on Wednesday claim the mining industry directly employs over 450,000 people and last year contributed over R300-billion to South Africa’s GDP, almost 8% of the country’s growth. Private fixed investment in mining, as well as the number of people it employs, has been steadily decreasing in recent years.

“This charter is bad for the industry,” said Mgojo. “This is one charter that’s going to scare investment.”

Chamber vice president Steve Phiri said he hoped court action would bring the department of mineral resources back to the negotiating table. He cautioned, “There are are a lot of constitutional issues here, so I would not rule out the possibility that this matter is adjudicated on by the highest court in the land.”

The Chamber boycotted a last-minute briefing from Zwane, which it saw as an attempt to get them to rubber-stamp a process it had not been part of. Zwane said stakeholders had been widely consulted and one could not be prioritised over the rest.

The National Union of Mineworkers on Thursday said it was still studying the charter. The Association of Mineworkers and Construction Union didn’t respond to requests for comment. Trade union Solidarity’s general secretary Gideon du Plessis said the charter’s inclusion of employment ownership figures was positive. “I always felt mining employees are the employees most exploited in the past. If you have to empower someone it should be employees.” He said it could help reduce strikes.

He cautioned, however, that the new ownership regulations could hurt workers. He said that while he supports transformation, the costs in transferring ownership to BEE partners could be passed on to workers, and bite them either when it comes to wage negotiations or through retrenchments. He also complained of a lack of engagement from the department of mineral resources. “We’re very upset,” he said on the discussions.

The Mining Charter also includes provisions on housing and community development. John Capel, executive director of Benchmarks, which has investigated mining companies’ commitments to their employees and communities, said there needs to be a greater focus on worker housing. Some companies have been able to improve employee housing issues, but others have seen workers pushed into sprawling informal settlements. Capel welcomed the community ownership provisions, but asked, “How does the community own it? In what way?”

Louis Snyman, from the Centre for Applied Legal Studies at Wits, said there is no stability in the sector, neither for companies or community rights. “I don’t think it will translate into real economic equality in the mining sector.”

He said the increase in black ownership quotas might be a positive, but he asked whether past patterns would continue. Would it see elites get richer or would ownership be transferred more broadly to communities and workers? The charter introduced positive steps, he said, but the most important elements were execution and monitoring.

Zwane was right. The latest Mining Charter is the most radical. We still don’t know, however, whether workers and communities will benefit. In its current incarnation it will significantly hamper investment. The markets on Thursday clearly did not approve. The minister ignored his key stakeholder, and the courts will prove whether he had the right to choose his version of radicalism over industry inclusiveness. DM