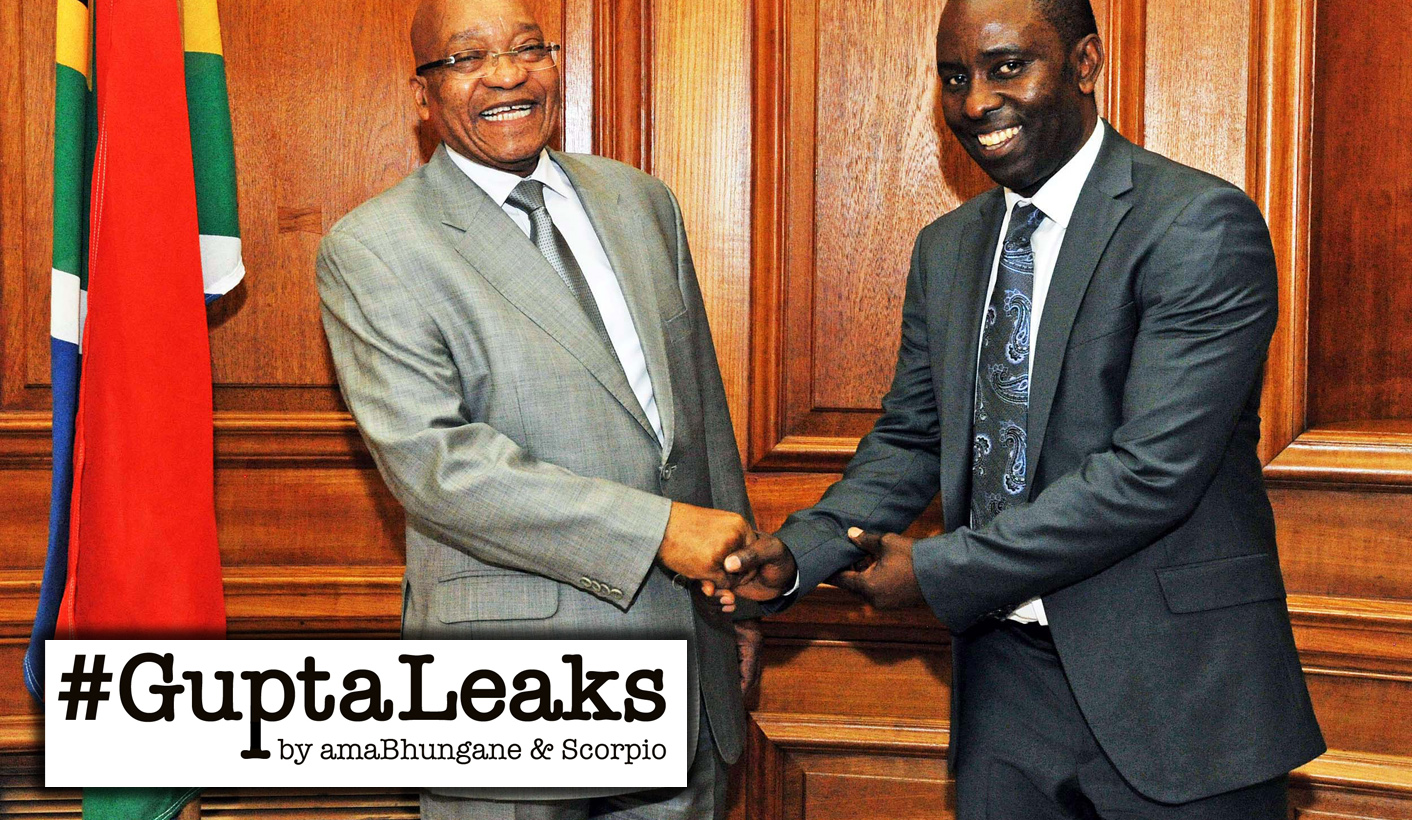 The e-mails and documents leaked from the heart of the Gupta empire provide mounting evidence that the president’s friends amassed a fortune offshore by preying on South African state contracts using their political contacts. By AMABHUNGANE and SCORPIO.

Now we can show how taxpayers were bled via a controversial dairy project. The evidence shows:

The #GuptaLeaks have unravelled four years worth of denials by the Gupta spin machine over the family’s involvement in the controversial dairy project at Vrede in the Free State.

The project got embroiled in controversy when it emerged in 2013 that the provincial government gave an unknown company, Estina (Pty) Ltd, free argricultural land and promised it hundreds of millions in funding, without a tender.

There were signs of Gupta involvement, but the family denied any connection save for a R138,000 consulting contract.

That, as it turns out, was a multimillion rand lie. Dozens of e-mails, invoices and other documents show the family had significant control over the scheme – and sucked some R84-million to a company they controlled in the United Arab Emirates (UAE).

Zwane, then Free State MEC for agriculture, drove the provincial government to adopt the project in June 2012. In October that year, the Guptas took him and his gospel choir on an all-expenses-paid Indian tour.

amaBhungane revealed in 2013 how the provincial government had gifted Estina, whose sole director was an IT salesman with no farming experience, a free 99-year lease to a 4,400-hectare farm outside Vrede, Zwane’s home town.

It also promised Estina R114-million a year for three years to set up a farming operation and dairy, whose supposed purpose was to empower locals and boost provincial agriculture.

amaBhungane established at the time that Estina had an address also used by Gupta companies and that Kamal Vasram, its sole director, had ties to the Guptas.

Vasram repeated the Gupta line that the controversial family was not involved, telling amaBhungane at the time: “I wish to categorically state that they are not involved in any manner in this project.”

The #GuptaLeaks offer a different take:

The Gupta brothers and a number of senior Gupta employees were involved in matters as diverse as recruiting staff for Estina from India; getting them work permits; approving a contract worker’s salary, and being approached for advice regarding an employee’s dismissal.

By the time Estina was kicked off the project in 2014 following a national Treasury probe and amaBhungane’s exposure of dead cows being dumped in a ditch, the provincial government had paid Estina about R184-million in taxpayers’ money.

The #GuptaLeaks open a window on what happened to a large chunk of that money, supporting the impression that the Guptas not only controlled Estina, but were the primary beneficiaries.

Zwane’s successor as agriculture MEC, Mamiki Qabathe, answered questions in the provincial legislature in November 2013, saying that by then a total of R114-million – tranches of R30-million and R84-million – had been transferred to Estina.

Spreadsheets in the #GuptaLeaks show a total of $8.35-million – equal to the R84-million second tranche at the exchange rate then – hitting the account of a company called Gateway Ltd in August and September 2013.

Gateway is registered in Ras al-Khaima, one of seven emirates making up the UAE and a highly secretive offshore company jurisdiction. Gateway appears to be little more than a Gupta front; it is among a number of UAE companies administered by a man who, the #GuptaLeaks show, is a Gupta subordinate.

Part of the R84-million appears to have gone to an engineering firm in Saharanpur, the Guptas’ home town in India. It went like this:

Star Engineering, based in Saharanpur, sent a letter to Ajay Gupta in 2012, thanking him for meeting and “taking interest in our line of production of super quality dairy equipments”.

In September 2013, Gateway, the Gupta UAE company, invoiced Estina for a milk pasteurising plant at US$3.45-million (about R34-million then). A little over a week later a similar amount from Estina hit Gateway’s account.

Further correspondence shows that Gateway ordered the plant from Star Engineering in Saharanpur. A representative from the firm asked for questions to be emailed, but had not replied by the time of publication.

And so, it appears that of the R84-million remitted to the UAE, R34-million was for actual dairy equipment – although how much was paid to Star Engineering and how much Gateway kept as a mark-up remains to be seen.

What happened to the remaining R50-million Estina remitted to Gateway is not clear.

Although there was some construction at the farm and some cows were bought, the full use of the remaining R100-million from the total R184-million that the province paid Estina also remains unclear. On visits to Vrede at the time, amaBhungane did not encounter development suggested by that level of expenditure.

Who pays the piper

Further evidence of the Guptas’ control over the project is revealed by #GuptaLeaks information about some Gupta firms’ relationship with Vasram, Estina’s director.

During the Estina saga, there were ongoing large orders from the Guptas’ Sahara Computers for IT equipment from Toshiba, represented by Vasram. E-mails also listed apparent transfers totalling millions of rand from Gupta companies to Vasram.

Vasram’s invoices, initially at R11,000 a month, started in May 2011, when Estina was negotiating the project with Zwane’s Free State agriculture department, and continued until at least August 2012.

In early 2013 there were two more invoices from Vasram to Linkway, for amounts of around R50,000 each.

These invoices suggest that the Gupta consulting company paid Vasram fees for the Estina work – again upending his and the Guptas’ insistence that Estina was his business and not theirs.

The #GuptaLeaks also give a view on the family’s extensive political connectivity in the Free State. A June 2014 document titled “Indian delegation” described a Gupta employee – one of those involved in the Estina project – as “adviser to Free State Premier”Ace Magashule.

Magashule’s son, meanwhile, was on the Gupta payroll – see The ‘Gift’ that keeps on giving.

As for Zwane’s October 2012 India trip, e-mails and associated records show bookings for 24 or more travellers, including Zwane, at Oberoi hotels in different parts of India.

At one point, “M Zwan <[email protected]>” personally sent a list detailing which members of the party should share rooms and who should get their own.

Tour programmes circulated included visits to the Taj Mahal and the “Kingdom of Dreams”, as well as “Mr Gupta house for dinner”.

In 2013, amaBhungane received information that Zwane was on the trip; that Gupta newspaper The New Age had sponsored caps and T-shirts, and that members from the Umsingizane gospel choir and officials from the Free State’s agriculture department were part of the group.

Umsingizane was apparently the brainchild of Zwane, who used it to develop and promote gospel musicians. His agriculture department subsequently adopted the choir.

Vasram and Zwane did not respond to queries from amaBhungane.

“The Free State provincial government has noted that the relevant authorities, including the Directorate of Priority Crime Investigations (Hawks), have embarked on investigations which are intended to test the validity and authenticity of such e-mails. Until such investigations are concluded, the premier and the Free State provincial government shall not respond to enquiries relating to the sources, content or allegations emanating from these ‘leaked’ e-mails.”

Gupta lawyer Gert van der Merwe also responded in general terms, saying in a phone call that it would be “inappropriate” to comment on claims about his clients:

“I will be more than just a cowboy to respond because I have no documents or context or instructions. It is inappropriate.”

Van der Merwe said: “One finds oneself in an unfortunate position, to answer on the record on the documents when people can’t say where they got the documents. It is unreasonable even in this day and age to answer to documents held in secrecy.”

He added that he had advised his clients to obtain the leaked e-mails – and that they had on Saturday “mounted an effort to get hold of them”. DM