From the Archives: amaBhungane and Scorpio #GuptaLeaks –The ‘Gift’ that keeps on giving 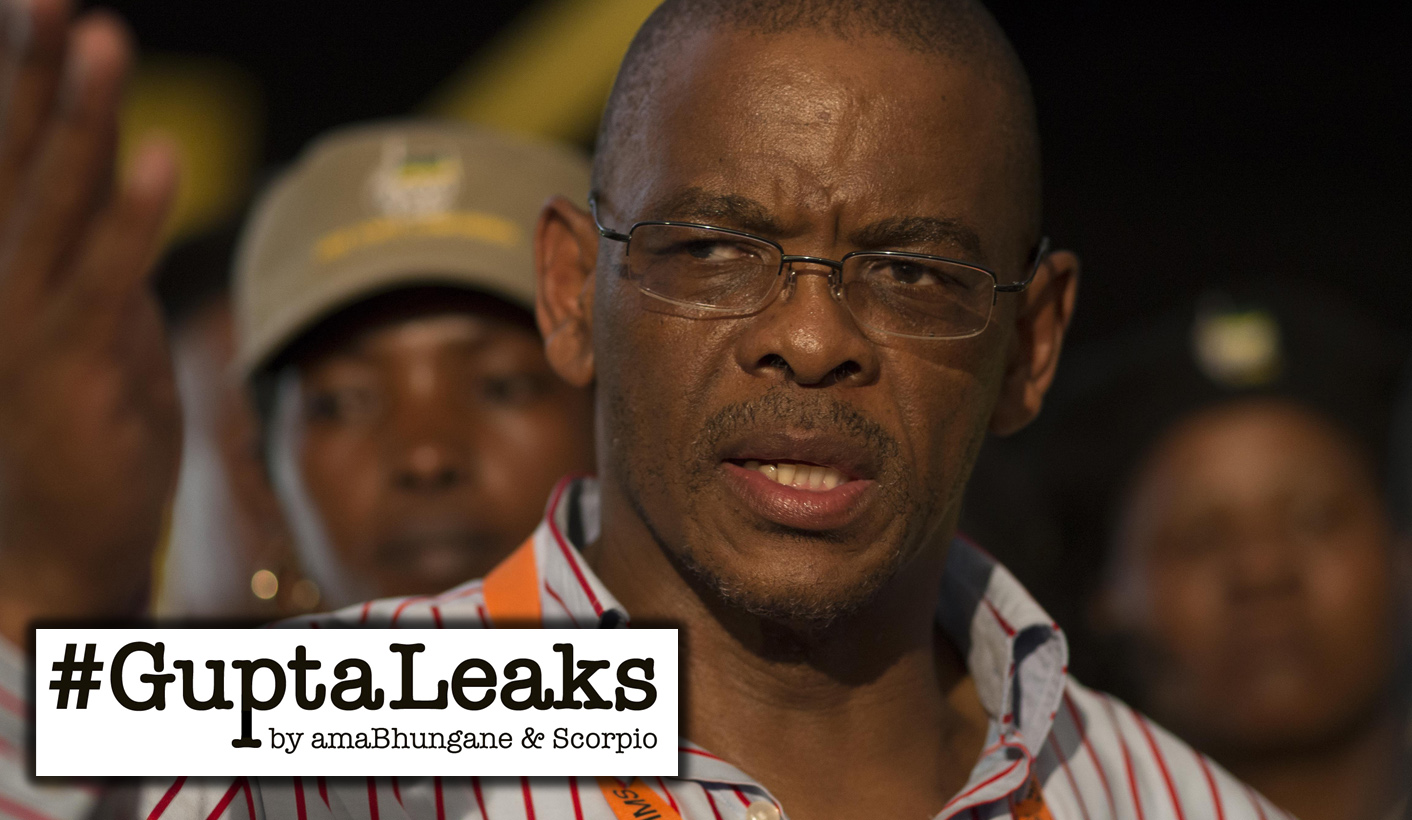 The Guptas dished out personal and political largesse to the sons of Free State Premier Ace Magashule. In turn, one son opened doors to Magashule’s office, where staff appeared to do the Guptas’ bidding. In much the same way that Duduzane Zuma was apparently groomed, the #GuptaLeaks suggest that Magashule’s sons were similarly primed to become Gupta intermediaries. By AMABHUNGANE and SCORPIO.

The revelations are contained in the #GuptaLeaks, a trove of data leaked from the heart of the Guptas’ business network.

The leaks offer details on what appears to be the Guptas’ modus operandi for locking-in political loyalties.

At an Indian hotel in 2012, an employee briefing his colleagues by e-mail on the imminent arrival of Rajesh “Tony” Gupta and a Free State entourage described the Gupta brothers as being “known for their billionaire lifestyles and open-door access to the highest levels of government, including the Jacob Zuma”.

Accompanying the group to India was future mining minister Mosebenzi Zwane. At the time he was Free State MEC for agriculture.

Notes and e-mails indicate that Magashule’s son Tshepiso started working for the Guptas as a consultant in November 2010, the year after Duduzane was brought into the Gupta fold.

In earlier days the two were treated more evenly. The #GuptaLeaks provide details of an extravagant Gupta family holiday in December 2011.

Tshepiso and Duduzane joined the Gupta brothers Ajay, Rajesh, Atul and their families on a three-week holiday to New York City and Venice, Italy.

A lengthy e-mail exchange between an Indian-based company, JV Travels and Ashu Chawla, a senior Gupta employee, detailed the group’s itinerary as well as a list of who was to fly first class and who would go business class. The young Zuma and Magashule both got business class.

Chawla signed off on the flight schedules and airfares: the 11 first class seats cost roughly R700,000 and the eight business class seats around R407,000.

The group flew to New York from Delhi in India on December 3, 2011. They spent about a week in the Big Apple before heading east again to Venice in Italy for a few days before returning to Delhi on December 20.

The #GuptaLeaks shows Tshepiso has called in for the ruling party.

May 6, 2014, a day before the national elections, Tony Gupta received an e-mail via Tshepiso with an attachment titled “Air time list”.

The e-mail trail shows Tshepiso received the e-mail from a member of the Free State legislature. The subject was: “As discussed.”

The legislator wrote: “Good morning, Attached please receive a list of FS ANC party agents in need of airtime, they all use MTN. It will be appreciated if air time amounting to R120 per person could be loaded today, 06 May 2014. Hoping for your positive response.”

The attachment contained the names and cellphone numbers of 362 people – apparently all Free State ANC members.

However, for every there appears to be a quo. And when the Guptas needed access to the power of the premier’s office, they used Tshepiso.

Narayan was a key figure in what amaBhungane previously reported appeared to be a money laundering scheme connected to the Guptas. He did not respond to requests for comment at the time.

Now Narayan told Tshepiso that he needed the document printed “on the official letterhead of the Office of the Premier”. The attached invitation was to Devendra Fadnavis, chief minister of Maharashtra, Mumbai.

“Ask them to fax and e-mail to the numbers provided in the letter once the Premier has signed. Please mail me a copy as well,” Narayan wrote.

Apparently heeding Narayan’s request, Tshepiso once again sent it to his father’s chief of staff, who responded: “Hi T, Please see the attached. I have the Chief Ministers e-mail address and can send it on directly should you wish me to. It may look better coming from an official premier e-mail address. Let me know.”

On the same Tshepiso forwarded the response to Tony Gupta.

It was previously reported that Magashule did something similar just before the three-day Sun City wedding of a Gupta daughter on April 30, 2013, in an apparent attempt to tick the box of the plane full of wedding guests being an official flight.

The #GuptaLeaks confirm the invite from Magashule, on official letterhead, to Bhupinder Singh Hooda, the Chief Minister of Haryana state. They also confirm that the invite was linked to the Guptas, as it was forwarded to senior Gupta employee Ashok Narayan.

The invitation said: “I would like to cordially invite you to visit us in the Free State Province … to explore potential areas of mutual co-operation between our countries with specific emphasis on trade opportunities between the Province of the Free State and the State of Haryana.”

Other e-mails suggest Tshepiso received support from the Guptas, including a loan of R80,000.

His brother Magashule apparently also received benefits. The e-mails show that the two brothers to Dubai in December 2015, where they stayed at the luxurious Oberoi Hotel for eight days.

The hotel sent an AED10,240 (roughly R40,000 at the time) bill for the Magashule brothers’ stay directly to the Guptas’ Sahara Computers.

Despite such benefits, the Magashule brothers seem to have been treated as mid-level assets by the Guptas.

At the time, Chawla instructed:

“All these guest [sic] entire bills we have to pay so please arrange payments for all except Gift Magashule and Magashule. For them just bed and breakfast.”

The group was booked into Oberoi Hotels throughout their stay. Shortly before their arrival, a hotel manager sent an e-mail to brief staff on the guests.

The manager said: “Dear all, this is in regards to the upcoming Sahara group at your respective hotels…

“Please note this is a VVIP group and Mr. Rajesh Gupta regularly stays at the Presidential Suite of the Taj in New Delhi.”

And: “All mini bars to be locked for the entire group excepting Rajesh Gupta and Videsha Proothveerajh.”

At the time, was an MEC in the Free State. Zuma controversially appointed him as mining minister in 2015. Even before the October 2012 trip to India, Zwane was linked to the via a controversial dairy project in Vrede, .

In 2013, amaBhungane first that was on this trip, that the New Age sponsored caps and T-shirts, and that members the gospel choir and officials from the Free State’s agriculture department were part of the group.

Chawla took care of bills, which were scanned directly to him by the Oberoi hotel group.

Zwane did not respond to queries from amaBhungane.

Gupta lawyer Gert van der Merwe also responded in general terms, saying in a phone call that it would be “inappropriate” to comment on claims about his clients. “I will be more than just a cowboy to respond because I have no documents or context or instructions. It is inappropriate.”

Van der Merwe said:  “One finds oneself in an unfortunate position, to answer on the record on the documents when people can’t say where they got the documents. It is even in this day and age to answer to documents held in secrecy.”

He added that he had advised his clients to obtain the leaked emails and that they had on Saturday “mounted an effort to get hold of them.” DM

The Bain Files, Part 1: Massone knew in advance Moyane would become SARS head and Bain would get restructuring contract