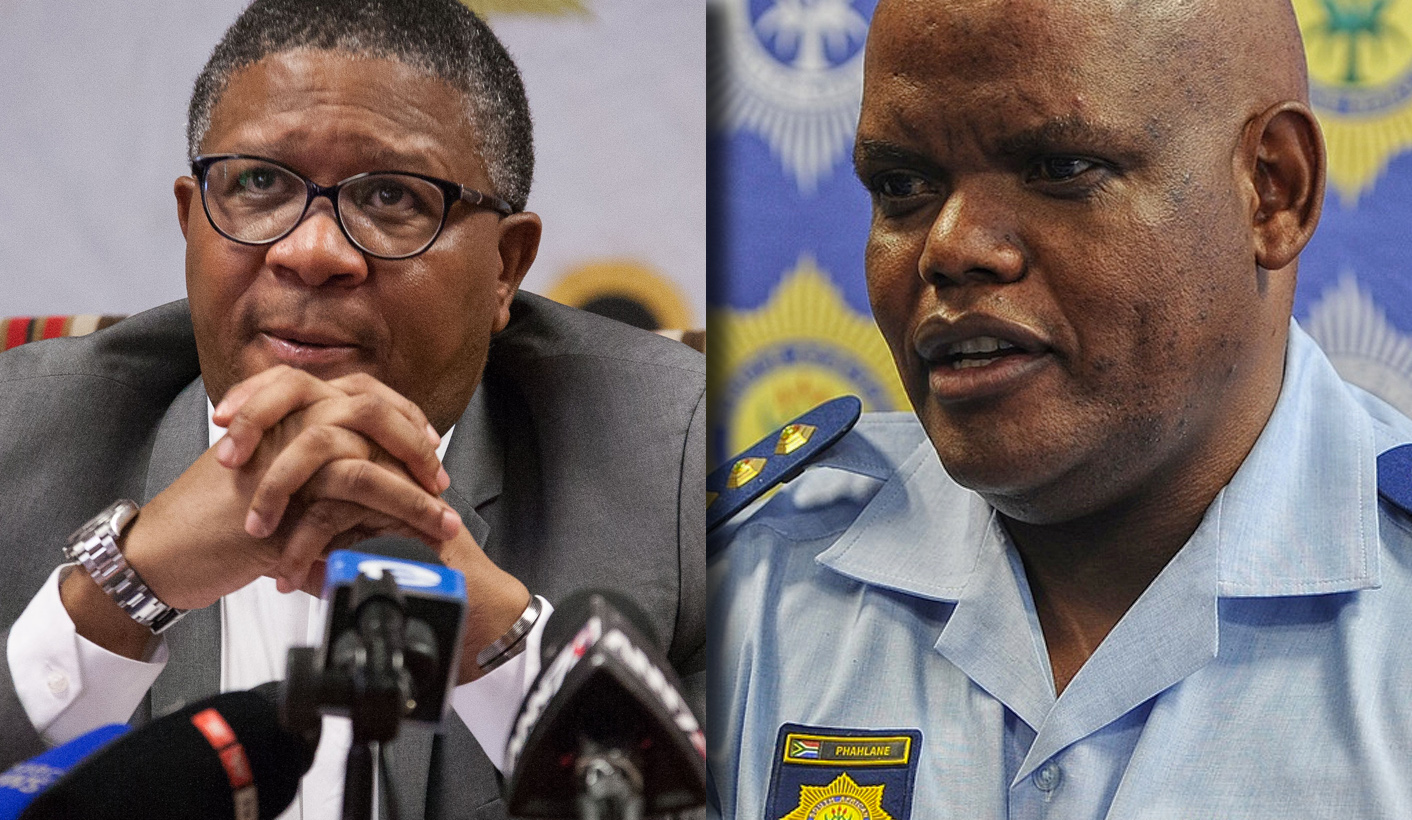 Having been told to step down as acting national police commissioner and return to his old job at the police forensics division, Lieutenant-General Khomotso Phahlane must now provide reasons why he should not be suspended. Police Minister Fikile Mbalula’s announcement on Thursday came after weeks of acrimonious tensions between Phahlane and police watchdog, the Independent Police Investigative Directorate (Ipid), which is investigating Phahlane over alleged kickbacks and dodgy tenders. At the same time the appointment of the new “interim acting” top cop, Lieutenant-General Lesetja Mothiba, was announced. By MARIANNE MERTEN.

The decision to replace Lieutenant-General Khomotso Phahlane with immediate effect was styled as one for good governance because the allegations against him, as Police Minister Fikile Mbalula put it, “impact on his fitness to hold office” and “raise questions of conduct that would be inconsistent with expectations that attend those who hold leadership in our police service”.

“It is clear to me that the initial reasoning over Lieutenant-General Phahlane’s undesirableness (to) stay as acting national police commissioner equally arises in his original role (at the forensic laboratory),” added Mbalula, saying he had requested a reason from Phahlane as to why he should not be suspended.

The announcement came a day after Ipid publicly condemned a planned police raid on its offices as part of an SAPS campaign against its probe, a move Phahlane through his media liaison dismissed as “outrageous”.

This was the latest twist after an acrimonious meeting of Parliament’s police committee two weeks ago when Phahlane and Ipid Executive Director Robert McBride traded verbal blows. Then Phahlane described the police watchdog as “captured” and “not independent”, while McBride said the SAPS had brought in “torturers” and “murderers” to counter-investigate its staff.

At this meeting it emerged that police have brought charges against two Ipid investigators who appeared in court at the end of May. Phahlane also has taken Ipid to court over its investigation not only into his luxury home, but corruption claims during his time at the police forensic laboratory. The police committee asked Mbalula to intervene.

Later on Thursday afternoon Mbalula broke the news, and his statement made it clear the Ipid investigation was a deciding factor, as was the SAPS response to it.

And so Phahlane and the rule of law would be better served if he “is afforded adequate time and personal freedom” to deal with these allegations against him “without the added burden of the office of the acting national police commissioner”, said Mbalula.

However, the police minister stressed that Phahlane had the right to be presumed innocent until proven guilty.

This is the second intervention in two months Mbalula has made in the in-fighting prone SAPS. Shortly after taking over the police portfolio, Hawks boss Lieutenant-General Mthandazo Ntlemeza lost an appeal against an earlier judgment that his appointment was invalid. And Mbalula told him not to return to the office, even if bringing further appeals.

But on Thursday Mbalula also said an official disciplinary inquiry was under way against police intelligence boss Richard Mdluli, who after some five years on suspension is set to appear in court this month. “I want that to be expedited, closed,” he said.

Mbalula approached President Jacob Zuma with regards to Phahlane as it is the president who appoints, suspends or removes from office the national police commissioner. Once the nod was given with an official media statement by the presidency, Mbalula could pronounce further.

The move was “in the best interest” of the SAPS and for South Africans. There was no time to waste in the fight against crime and “issues on the other side” were distracting. But he also had to get his legal ducks in a row. “We are a litigation-prone department. No one goes without a fight.”

For cash-strapped Ipid the announcement can be seen as a boost in standing. It has not yet been able to conclude its investigations into the August 2012 police killings of 34 Marikana miners, and at a police committee meeting earlier this year was caught by surprise on hearing that the SAPS had cleared 87 of its own in relation to the killings. But it’s also a double-edged sword, as Ipid is now under pressure to prove its case.

“By August, we should have a national commissioner in place,” said Mbalula.

Until then, Mothiba – 32 years in the police, with a stint as Gauteng SAPS commissioner until January 2016, when he was transferred as divisional head to the management intervention unit – holds the post. “My role is to fight crime and provide a service to the country,” he said on Thursday. DM