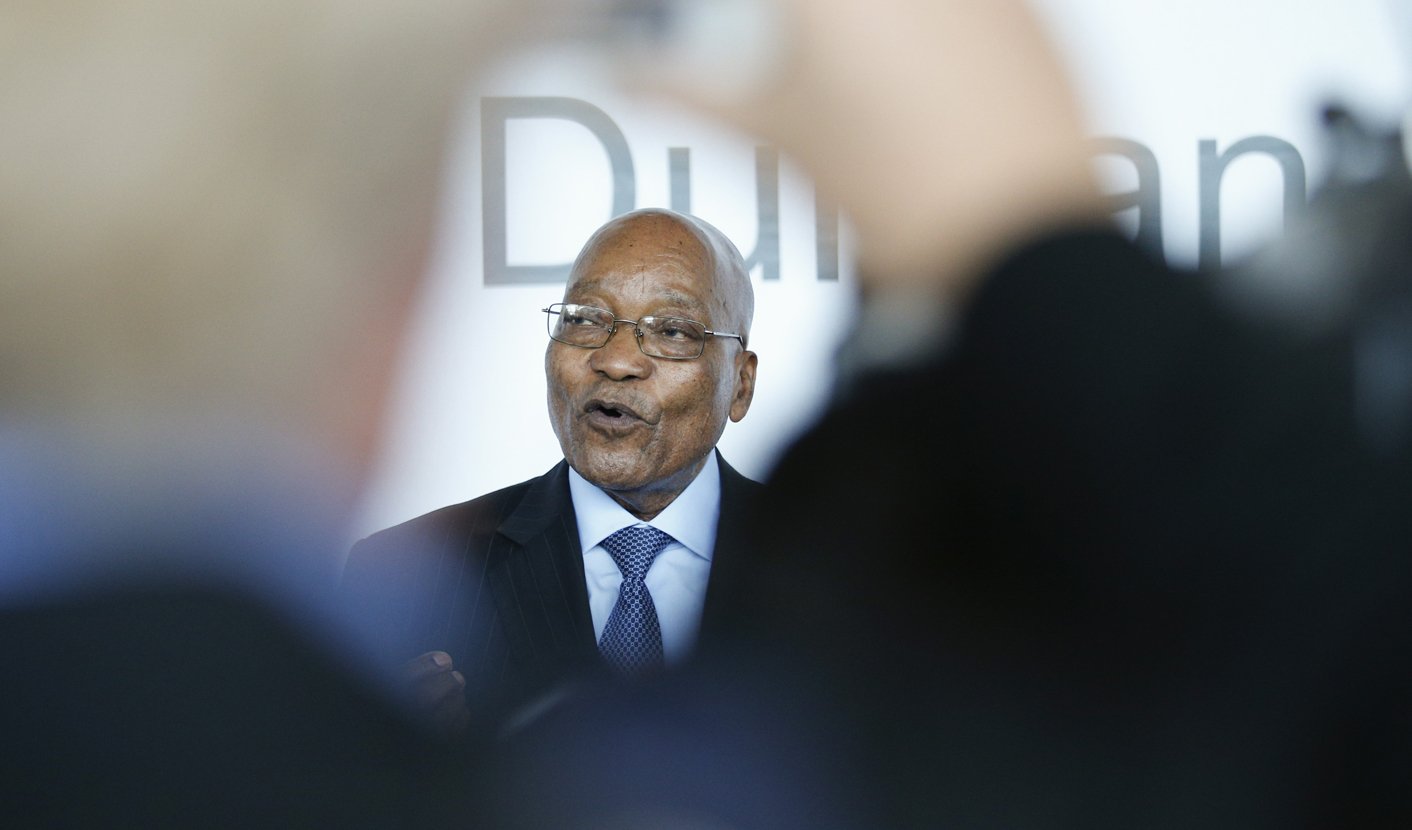 The SAPS and Independent Police Investigative Directorate (Ipid) are in open war. In an unprecedented move, acting national police commissioner Lieutenant-General Khomotso Phahlane on Tuesday described the police watchdog as “captured” and “not independent”. In turn, Ipid Executive Director Robert McBride said the SAPS is abusing state resources to target its investigators probing Phahlane’s lifestyle and possible kickbacks by bringing in a team of “torturers” and “murderers” from the North West. What was meant to be a clearing of the air in Parliament’s police committee became personal – and now MPs want Police Minister Fikile Mbalula to step in. By MARIANNE MERTEN.

Acting national police commissioner Lieutenant-General Khomotso Phahlane came ready and armed, bringing along 11 subordinates and a 61-page written submission. “Ipid as an independent body does not exist. I may be safe to call it Opid, the O’Sullivan police investigative directorate. They’ve been captured for far too long,” was Phahlane’s opening salvo. It was a reference to private investigator Paul O’Sullivan, who alongside police union Popcru laid the original complaints against the acting national police commissioner, including dodgy procurement, while he headed the police forensic laboratory and claims of fraud and corruption.

It was a classic dirty tricks campaign. Tuesday’s SAPS presentation to MPs included a series of SMSes from Independent Police Investigative Directorate (Ipid) boss Robert McBride, former Hawks Gauteng head Shadrack Sibiya and O’Sullivan, whose ID number, home address and even the serial number of his pistol were publicly disclosed.

What was left unanswered was an opposition question as to whether the legally required permission from the judge appointed to oversee interceptions was obtained. However, from the SAPS presentation to MPs it emerged O’Sullivan’s cellphone was seized during his arrest earlier this year and “information was downloaded from the handset and a report was generated by a forensic expert”. It remains unclear why police presented Parliament with information obtained as a result of an arrest, instead of or in addition to the court.

But with the involvement of crime intelligence – Phahlane was at pains to point out it was not the police’s counterintelligence division that reports directly to him – much is possible. And this includes conducting security assessments, which determined Phahlane’s life was under threat.

That assessment was done by the security intelligence unit of the crime intelligence. The reason Phahlane’s life was in danger? On November 9, 2016 a Ford Kuga came to the Sable Hills Waterfront Estate security estate where he lives, gained entrance, went to Phahlane’s home, asked question about his protectors and the blueprints for the multimillion rand home, the acquisition of which is subject of the Ipid probe. It is on public record O’Sullivan accompanied Ipid investigators.

That visit, and crime intelligence’s assessment that it constituted a threat, led to the establishment of a five-strong investigation team under Major-General Ntebo Mabula, the North West SAPS deputy crime detection head. But in a case of plausible deniability for Phahlane, MPs were told Mabula reports to the acting national crime intelligence divisional head Major-General M A Makhele, who in the first place authorised the probes. It was also the acting crime intelligence head who had requested the North West police commissioner to release Mabula, who has been in the police for 33 years, from his provincial duties to come to Pretoria.

“Just as Ipid is empowered to investigate, the SAPS is empowered to investigate and we are not going to be spectators when there are allegations,” maintained Phahlane, adding later: “Mabula was informed by a security threat assessment and that flows from an attack I was confronted with [at a would-be robbery of a Johannesburg spa]. There’s a direct link between that and Paul O’Sullivan… ”.

And aside from investigating the Ipid investigators investigating Phahlane, Mabula is also investigating O’Sullivan. In what appears to be a tit-for-tat the private investigator has been arrested repeatedly last year – it includes being the first South African to be arrested for dual citizenship last year, and also extortion, fraud and kidnapping counts – and most recently in February 2017 in a show of force and in contravention of a court order that required 48-hour notice of a pending arrest to be given. That Hollywood-style arrest with plenty of unmarked police cars just as O’Sullivan was leaving AfriForum later played out in court.

This is where Ipid’s assertion of interference of its probe of Phahlane began. Mabula, like his colleagues on the five-man team, was charged with torture dating back to incidents some 10 years ago. On Tuesday Mabula told MPs the case of torture had been struck off the roll, but Ipid pointed out the only reason this had happened was because the National Prosecuting Authority (NPA) was consolidating and centralising all these cases.

In addition, Ipid has taken a dim view of this task team interviewing the same witnesses it has in its probe against Phahlane. “We can’t be counterinvestigated. State resources can not be used to protect (Phahlane),” said McBride, while Ipid investigations head Matthews Sesoko outlined death threats against the police watchdog’s investigators. One texted threat came from a police official based at OR Tambo International Airport; the other was traced back to the reception town from the SAPS head offices, or “3G_SAPS_Intel_HQ_MNI_NGA”.

This, alongside the interference with the Ipid investigation and its witnesses, was “unlawful” and “a shocking abuse of power”, said Sesoko, calling on Phahlane to step down.

No matter how often McBride said O’Sullivan had simply provided information, played a “minuscule” part and had assisted with only three of the 67 witness statements, Phahlane was unconvinced and continued to finger O’Sullivan as a central and deeply annoying player. MPs were told of the “no less than 49 e-mails” the private investigator sent Phahlane, including some rather unfortunately phrased ones in which O’Sullivan promised to be on Phahlane’s case like “an ill-fitting suit”. Selected excerpts of these e-mails were presented to MPs.

There are many sideshows in this debacle which MPs on Tuesday said left them “depressed” and “outraged”. One of these subplots is the SAPS’s assertion of its own investigation into the Popcru allegations of tender irregularities and grievances over appointments. Phahlane reminded MPs of an earlier briefing to them that a probe authorised by now suspended national police commissioner General Riah Phiyega had cleared him and others. But the SAPS also told MPs its internal proceedings absolved 87 of its own of any wrongdoing in the August 2012 police killings of 34 Marikana miners. The Marikana commission of inquiry recommended a series of investigations by Ipid, some of which are completed, but others are not, due to shortage of funds.

“My privacy has been invaded for far too long,” Phahlane told MPs, claiming his bank statements and his home’s blueprints had been handed to O’Sullivan by Ipid. And so the acting national commissioner has approached the court over the search even though nothing was taken from his home, a move which is costing Ipid R900,000 to defend and, according to Phahlane, “even more”.

Meanwhile, Ipid is also having to pay for the two investigators, Mandla Mahlangu and Temane Binang, whom Mabula’s team has charged with being accessories with O’Sullivan. They will appear in court at the end of the month, in another instalment of this particular saga.

Questions must be asked about the silence of the constitutionally established Civilian Secretariat for Police in all this. After all, on its website the secretariat says it “provides efficient and effective civilian oversight over the SAPS & enhances the role of the Minister of Police”.

The war between the SAPS and Ipid has left neither the police committee, opposition parties nor the ANC parliamentary study group on police pleased. Their call was for an intervention by Mbalula, who has taken his Twitter #WanyaTsotsi anti-crime campaign across the country. DM