House of Cards: Paul O’Sullivan comes up against old foes 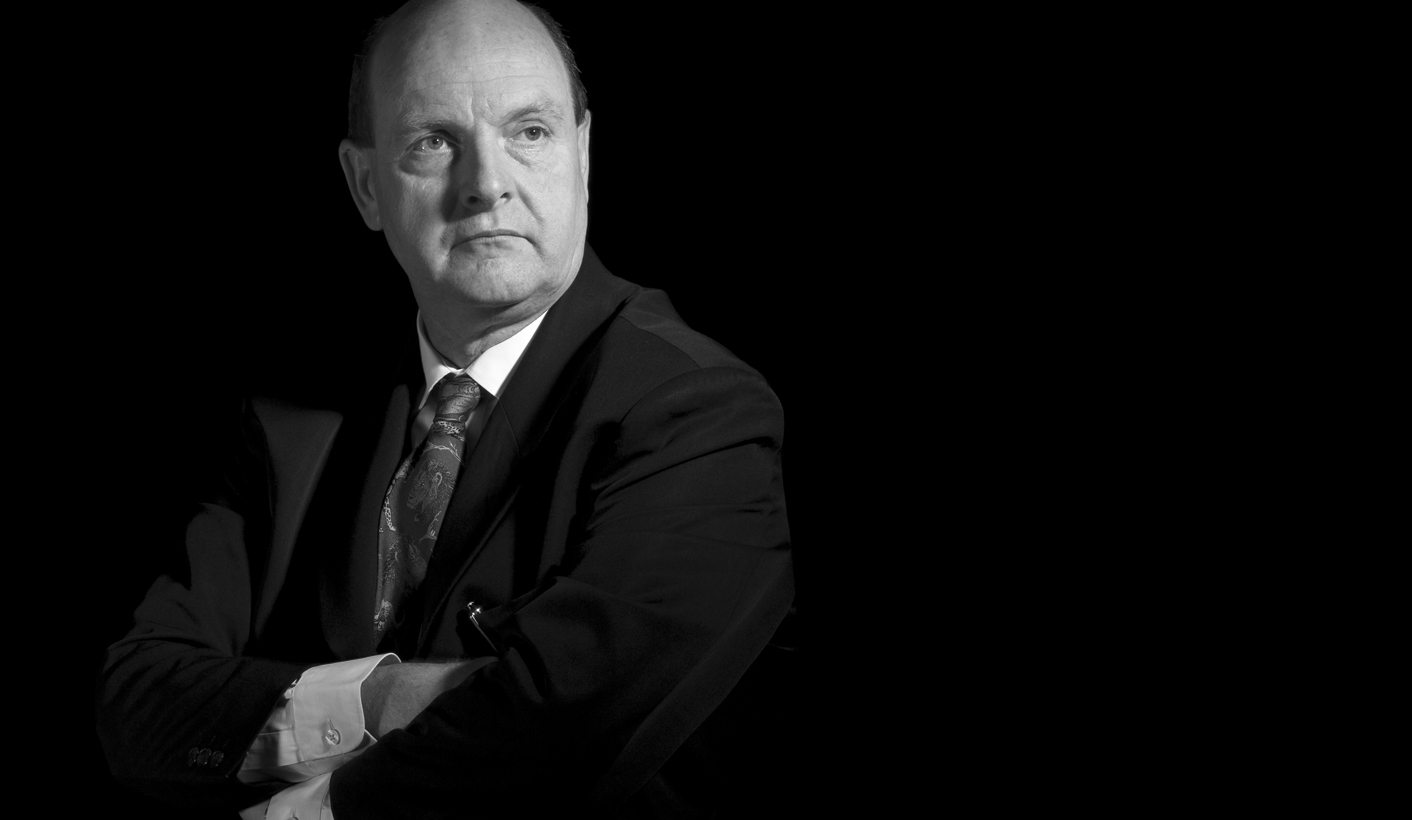 Forensic investigator Paul O Sullivan, who was arrested by the Hawks in front of his two children at OR Tambo International Airport on Friday night on a minor charge of travelling on two legal passports, has been granted R20,000 bail. In court on Monday was one of O'Sullivan's old adversaries, Prince Mokotedi, former head of the NPA's integrity unit and now Gauteng head of the Hawks. O'Sullivan's arrest appears to be a part of an ongoing chapter involving several recurring main actors and that stretches all the way back to former Commissioner Jackie Selebi's conviction for corruption. By MARIANNE THAMM.

Journalists who attended O’Sullivan’s bail hearing in the Kempton Park Magistrate’s court on minor charges of travelling on two legal passports, were puzzled to see the new Gauteng head of the Hawks, Prince Mokotedi, sitting in the court benches. Mokotedi had reportedly met earlier with the prosecutor in the case, which was later postponed to 6 May after O’Sullivan had been granted bail of R20,000.

When asked why the Hawks would be so keen involve themselves in a relatively uncomplicated matter of Contravening the Citizens’ Act, Mokotedi refused to comment. It is the first time in the country’s democratic history that a naturalised citizen has been arrested on these charges.

Meanwhile a reliable source close to the O’Sullivan investigation has told Daily Maverick that the Irish-born investigator might face three charges of Treason and that investigators have begun digging into all the cases he has been investigating.

O’Sullivan was accompanying his children who were due to return to school in the UK and was arrested by the Hawks at OR Tambo on Friday night. While the Hawks have told the media they had swooped after receiving a tip off that O’Sullivan would be travelling on “three passports” the truth is O’Sullivan himself had tipped them off that he would be leaving on that date.

In an email to the Hawks on 15 March O’Sullivan wrote:

“You dirty cops know where to find me, I’m waiting for you, and I’m ready for you. Bring it on you corrupt cowards. On 2016-04-04 I shall be calling a full blown media conference in, Whitehall, London, the purpose of which will be to tell the world that SA has been taken over by a corrupt regime of Zupta-led criminals and that the world must now boycott SA in every way possible, just like they did during Apartheid, until the people run the country again. I shall be departing here on 2016-04-01. Be like the apartheid government and stop me from leaving, thereby giving a global voice to my campaign, to stop the corruption that is tearing this country apart”.

The animosity between Mokotedi and O’Sullivan goes back a long way. Mokotedi, before he replaced Major General Shadrack Sibiya (who is, unsurprisingly, currently facing charges of kidnapping and defeating the ends of justice), was the former head of the NPA’s integrity Unit and in 2014 faced a disciplinary hearing for gross insubordination for the “dissemination of false and misleading information and bringing the NPA into disrepute.” The charges were dropped after he resigned from the unit.

Mokotedi was suspended after a document on wait, for it… former prosecutor Glynnis Breytenbach (now DA MP and Shadow Minister of Justice) had been leaked to the media. Breytenbach was at the time investigating, wait for it … former Crime Intelligence head Richard Mduli. Mokotedi denied leaking the document. Mdluli is close to wait for it… President Jacob Zuma.

After his resignation from the NPA Mokotedi suggested in a radio interview that O’Sullivan had been a “a spy who had infiltrated the NPA”.

Mokotedi was also one of the witnesses for Selebi who told the court that the police chief’s prosecution on charges of corruption had been a conspiracy by the now disbanded Scorpions.

However, Mokotedi found himself back in the game when Sibiya was suspended in January 2015, a suspension that was subsequently ruled unlawful by North Gauteng High Court Judge Elias Matojane. Delivering that judgement Judge Motojane said that current head of the Hawks, Lieutenant General Mthandazo Berning Ntlemeza, had lied under oath and had been dishonest.

In papers to the court Sibiya accused Ntlemeza, who was acting Hawks head at the time, of having been motivated by the desire to take revenge on behalf of his “ally”…..suspended Lieutenant Richard Mduli.

In October 2012, two years after Selebi’s sentencing, O’Sullivan filed formal charges of Defeating the Ends of Justice and Perjury against 11 individuals. All these, he reckoned, had, one way or another, been linked to the investigation into the former police chief. His complaint has thus far been ignored.

There is a delicate and dangerous filigree linking all of these names in the current power struggle that is white-anting this country’s crime fighting capacity. Somewhere in the centre of all of this is President Jacob Zuma.

In another email to the Hawks last month O’Sullivan wrote:

“I have also now started a process to topple Zuma, as he is the master-puppeteer behind all the criminals in the police and he will eventually go to prison, so all the criminals from the criminal justice system can all have a cosy times in Kokstad, with Krejcir, Zuma, Moonoo and the other rubbish that belong there, and that I will put there.”

While both Glynnis Breytenbach and Hawks KZN head Johan Booysen have both had their suspensions ruled unlawful by the labour court, in February the Hawks reinstituted charges of defeating the ends of justice against Breytenbach. Two days later charges of racketeering against Booysen and 27 members of the Cato Manor Organised Crime Unit were also reinstated.

In the meantime former Hawks head, Anwa Dramat, who was reportedly handling the Nkandla investigation, resigned after he was suspended with regard to the Zimbabwean rendition case. Dramat along with Sibiya and Captain Lesley Maluleke now face seven charges of kidnapping, one defeating the ends of justice and four of illegal deportation.

Robert McBride, former IPID head, has been accused of “doctoring” an initial report into Dramat in order to “protect him”. McBride as well as IPID investigators Matthew Sesoko, and Innocent Khuba face charges of fraud and defeating the ends of justice following their investigation of Dramat. After his appearance in court on 16 March McBride accused the Crimes Against the State Unit of being the “gestapo wing” of the Hawks.

McBride’s suspension as IPID head by Minister of Police, Nathi Nhleko, was overturned by the court in December 2014.

Meanwhile, Khuba entered an explosive affidavit to the court revealing that “members of the Hawks had already made advances asking me to make a statement that implicates McBride and the IPID’s former head of investigations, Matthews Sesoko, in order to be reinstated into my position”.

Seeking to link the dots once might perhaps find a narrative that runs thus: Dramat had to go because he would have protected Booysen. Sibiya had to go because he handled a particular case involving a “kidnapping” and another concerning tobacco-smuggling. And because these cases are so weak, McBride’s case is required to prop up the case against Dramat.

And here the loop links back the SARS and the alleged “rogue unit” allegations. Former Deputy Commissioner Ivan Pillay made a public statement that President Jacob Zuma would have to pay tax, just like the rest of us. The High Risk Investigative Unit was, before it was disbanded, investigating several, let’s call them highly sensitive projects.

O’Sullivan’s investigations have not only been into corrupt officials but also have more far-reaching implications should these be proved in a court of law. O’Sullivan might have, according to a source, uncovered a link between the Hawks the NPA, IPID and SARS sagas and is flying too close to a dangerous flame.

Every day thousands of people who legally possess dual citizenship pass through the country’s customs points at airports, yet O’Sullivan was stopped for this.

On Wednesday in Johannesburg the Helen Suzman Foundation and Freedom Under Law application seeking urgent interim relief by interdicting Ntlemeza from exercising any power or discharging any function or duty as national head of the Hawks will be heard. The foundation is also seeking a review and setting aside of his appointment.

Four days after lodging its court papers in this matter, the foundation experienced an unusual military-style burglary or “raid” at its offices where documents and computers were seized.

The dots, in the meantime, are steadily being joined. DM