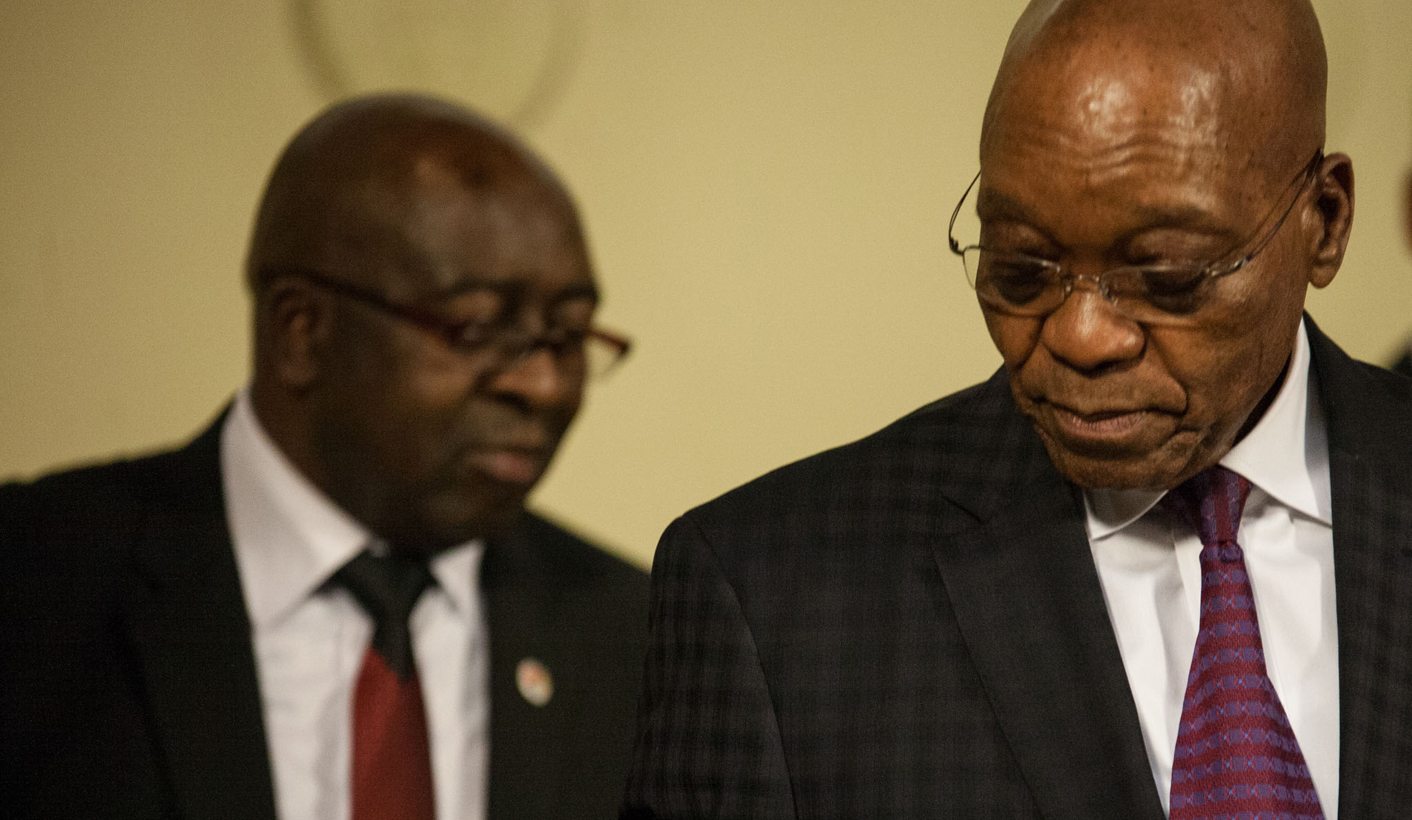 While President Jacob Zuma might have told Parliament on Thursday that he had his “reasons” for firing Finance Minister Nhlanhla Nene in December, he didn't choose to elaborate on them (or on any other urgent issues of the day). But might a bizarre, anonymous “intelligence” report, released shortly after charges against former crime intelligence head Richard Mdluli were withdrawn in July 2015, provide clues to the thinking behind Zuma's apparently baffling move in shafting Nene? By MARIANNE THAMM.

At times of political uncertainty, the country’s spooks get to work. Remember the 2001 “plot to oust Mbeki” by Tokyo Sexwale, Cyril Ramaphosa and Mathews Phosa? Or how about the 2007 “Browse Mole Report” which suggested that Jacob Zuma was receiving covert funding from Libya and Angola?

Remember the report that former head of the Defence Force, General Georg Meiring, slipped to then President Nelson Mandela in 1998 about a coup by the unheard of FAPLA or Front African People’s Liberation Army who planned to assassinate Mandela, murder judges and occupy Parliament?

Then there was the 2012 “Ground Coverage Report” signed off by former crime intelligence head Richard Mdluli (he claims the signature was forged) that then Human Settlements Minister Tokyo Sexwale, KwaZulu-Natal Premier Zweli Mkhize and Bheki Cele plotted to overthrow Zuma?

It’s an old trick – the smearing of perceived opponents – suggesting they are either agents of some sinister (usually Western) force, and many have been targeted by equally sinister disinformation campaigns including Thuli Madonsela, Mathews Phosa and Zwelinzima Vavi. It is a method of sowing confusion and placing a fog of smoke and mirrors around the real issues. President Jacob Zuma was the head of intelligence in exile and is well aware of tricks of “tradecraft”.

While President Zuma told MPs in Parliament on Thursday that he had “his reasons” for firing Finance Minister Nhlanhla Nene in December, he didn’t elaborate on these. Might it have been because Nene refused to sign off on a trillion-rand nuclear deal with Russia and from which the Gupta family might stand to benefit richly?

In August 2015, then editor of Business Day, Songezo Zibi, wrote about the curious timing of an intelligence report titled Project Spider Web which suddenly surfaced and which suggested that the Treasury had been “captured” by apartheid-era intelligence operatives as well as “white capital” in order to control the country’s finances.

It is interesting to note that the “report” emerged a month after charges against former intelligence head Richard Mdluli (who is rumoured to be closer to No 1 than the Gupta family) as well as Solly Lazarus, former chief financial officer of the Police Crime Intelligence Unit and his subordinate Hein Barnard were withdrawn in July in the Commercial Crimes Court in Pretoria.

By then, President Zuma had appointed Tom Moyane as the new SARS commissioner and who went on to purge the organisation of its top executives, including Deputy Commissioner Ivan Pillay and others. The intelligence report had suggested that SARS had been “captured” by members of “Project Spider Web” which included Trevor Manuel and Maria Ramos who, the report claimed, were known to this cabal by the codenames of the King and Queen of Leaves (go figure?).

Zibi wrote that he could not help but notice a curious point of celebration in the intelligence report. Highlighted in red, it read; “At the present moment the Spider Web suffered a huge setback when their top members were suspended by the new (SARS) commissioner. This unit was regarded as the enforcers of the Spider web (sic)”.

Zibi responds, “Aha! Whoever wrote the document is happy that the ructions at SARS took place.”

And then Zibi writes, “Finance Minister Nhlanhla Nene has seen the document and is not happy. He told Business Day he was concerned that the Treasury was the ‘next target’ in an attempt to undermine legitimate state institutions. He has asked the security establishment to investigate its origins.”

Nene handed the report to Minister of State Security David Mahlobo, who has since come out to bat for the Hawks, who are currently relentlessly hounding Minister of Finance Pravin Gordhan.

At the time, Carol Paton, also writing in Business Day, said Nene had had a difficult choice.

“If he had not taken action, he would certainly have been asked by those who want a Treasury clean-out why he was failing to act on such serious allegations. But by doing so, he might have unwittingly invited the spooks into the Treasury to have a good sniff around.”

Zibi pointed out that the context for the Treasury smear “is a nuclear procurement programme that has been shrouded in secrecy and the dodging of due process. At some point soon, the Treasury will have to give it a thumbs up. To be clear, President Jacob Zuma announced the programme before a cost assessment was made, certainly before the Treasury was consulted. It is known too that Russia is the favourite to clinch the deal, and that discussions between the two countries treat this as a fait accompli.”

He added that the smear had become necessary “to delegitimise the voice of the Treasury when crunch time arrives. Who would want to listen to the voice of ‘apartheid agents’? This may form the basis for their suspension, pending an ‘investigation’.”

Four months later in December, Nene was gone – fired by President Zuma – replaced by David van Rooyen, a move which resulted in a nuclear meltdown of South Africa’s economy.

And then the surprise reappointment of Pravin Gordhan, a move Zuma and the authors of the mysterious report most certainly view as a setback.

And here we are. Full circle. It seems the ANC, in this current iteration, just like the apartheid government, abuses intelligence and resorts to smear tactics and intimidation to deal with those they perceive as political opponents.

Meanwhile the real business of government – delivering services, creating jobs, building infrastructure, educating our children, securing our future – takes second place to the needs and wants of a few powerful individuals who would capture our hard-won freedom. DM