Digital terrestrial TV: The ANC has lost faith in Muthambi 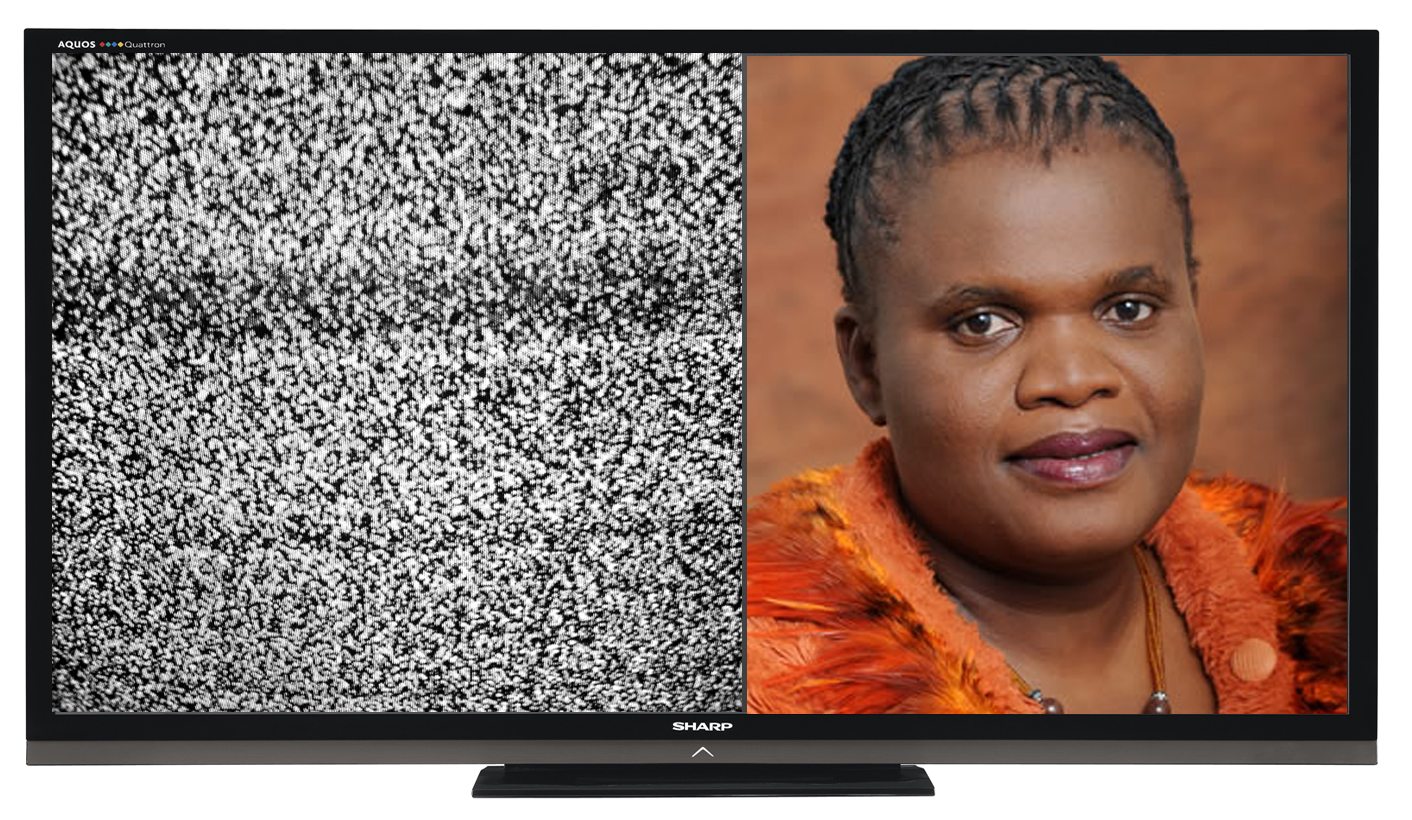 It's now official: the ANC and the communications minister the ruling party deployed to the Cabinet are at war. There can be no other interpretation of the events of the last 24 hours. At issue is the decision on the type of digital terrestrial television we will use. It's a decision that will have implications for South Africa for a long time, possibly the next 50 years. At its heart is a choice between a system that will allow for strong, sustainable, independent television stations, and an SABC that will be able to broadcast in high definition, while protecting their content, and a system that will result in lower-quality broadcasts, make it impossible to prevent piracy, and help only MultiChoice/DStv. Now the battle is out in the open. By STEPHEN GROOTES.

In 2014, President Jacob Zuma appointed Faith Muthambi communications minister. It was not an obvious choice. Previously African National Congress (ANC) whip on the Communication Portfolio Committee, Muthambi did a few interviews representing the government in the position and then the always respectable and well regarded Jeff Radebe was brought back to represent the Cabinet in press conferences. But Muthambi stayed on as communications minister and started to drive the digital migration project.

The ANC had been through this issue very carefully: it’s Communications Commission, chaired at the time by Lindiwe Zulu, who these days is small business development minister, had looked at every aspect of it. They decided to go with encrypted digital TV.

There is a counter-intuitive thought that needs to be examined here. The view of many experts is that while an unencrypted signal may make it easier to actually broadcast digital TV, it would be much harder to sustain those channels. They would not be able to source quality content as it would be vulnerable to piracy. The set-top box that translates the signal for older TVs could not be used for anything else, and there would be very little benefit to anyone. In the end, the independent terrestrial television stations would battle, ie companies like e.tv could struggle to stay in business. If, on the other hand, the signal is encrypted, then the independent players and the SABC would be able to broadcast higher quality content, while the boxes could be used for other services.

It’s important to know which outside party could benefit from what here. If the independent stations are weak, MultiChoice, through its DStv network, benefits as it can and does encrypt its signals. If the digital transmissions are encrypted, it would face significantly more competition.

And yet, Muthambi, for reasons known only to herself, went, against the ANC’s wishes, with the unencrypted system, despite several assurances to e.tv it would be consulted before any decision was made. In response, e.tv went to court, and lost, pretty much on a technical point that the government is allowed to make policy. The station could, and probably should, still appeal.

Then, on Sunday, at the ANC’s national general council (NGC), the Communication Commission held a press conference on its decisions. There, Zulu, new chairperson Jackson Mthembu, and Telecommunications Minister Siyabonga Cwele explained that they were unhappy with the fact the ANC had not been consulted on certain decisions. Cwele said “we don’t want dummy boxes” (presumably a reference to the unencrypted set-top boxes that don’t offer other services), Mthembu said the ANC “could not remain aloof” to what was happening, and demanded “engagement”. He also said “everyone knows the ANC was not consulted on this matter”, leaving no doubt where the commission’s heart is.

At the time, it looked very much like the ANC had rebelled against Muthambi.

On Tuesday morning, the Department of Communications released a statement, saying: “The Department of Communications wishes to place it on record that the ANC NGC never discussed a possible reversal of the Broadcasting Digital Migration Policy as reported in the Business Day and Business Report on Monday, 12 October 2015. The matter of encryption was also not discussed in the commission and plenary sessions of the national general council when the report of the commission was adopted.”

There was more: Mthembu’s comments about the ANC not being consulted were “patently untrue”, and it was added that he must clarify that they were his own opinion.

This was the possibly unique sight of a government department claiming to know what happened as a fact in an ANC commission. So much for that line between party and state: this was a minister in fact trying to claim to know more than the ANC itself about its own event.

Then, the South African Communist Party (SACP), which has always backed encryption, got involved. It’s second deputy secretary general, Solly Mapaila, complained that Muthambi was “distorting” the views of ANC delegates; he demanded that this practice of ANC deployees ignoring the wishes of the ANC stop.

All of this together adds up to quite a story, the SACP may only be an alliance partner of the ANC, but it’s still quite strong language, and rather strong criticism of a serving minister.

Amazingly, more was to come, this time from Luthuli House itself.

The ANC said in a statement that it was “unfortunate” that there “are a number of inaccuracies” relating to the commission conversations in Muthambi’s statement. The party’s anger was clearly overflowing when it said: “We want to assert the responsibility to communicate ANC NEC, conference, NGC and other decisions, resides with the secretary-general of the ANC, the spokesperson of the ANC, and the chairpersons of its ANC NEC subcomittees.” It went on to say Muthambi had “unfortunately” (that word again) accused Mthembu of being a liar.

There are clearly several dynamics at play here. Muthambi is obviously not the darling of the ANC at the moment, in fact, this could be the most public anger expressed at any serving minister since 1994, save perhaps for the Congress of South African Trade Unions’ visceral reaction to Manto Tshabalala-Msimang. That leads to the question of why Muthambi is there in the first place. Certainly no one could survive this sort of anger from the party in the Cabinet if they were not protected by Number One himself, a position similar to that of SABC chief operating officer Hlaudi Motsoeneng.

Then there is the idea that parts of the ANC, despite everything that has been said and written about Zuma, and his hold over it, are prepared to push back on certain issues. In this case, the ANC clearly believes that encrypted signals are in the national interest, and people are sticking their necks out to make sure that policy is followed. This could well be the most public area of push-back against Zuma so far on policy. If the people who do this survive, and people like Mthembu and Zulu are themselves fighters, others could be emboldened to do the same.

At the same time, it is hard to know why Muthambi is pushing the agenda she is. Obviously we ask the usual question in politics, who benefits? In this case, it must only be MultiChoice; there seems to be no other party who could.

Then there is the situation at the SABC. You would expect the SABC to pursue its own interests, which would probably lead it to go for encryption, as it could help protect its signals and ensure the likelihood of sustainability. The SABC sells advertising too, and thus needs viewers, hence it needs good content. Still, Motsoeneng has tied it up in a massive deal with MultiChoice.

Motsoeneng and Muthambi have at least two things in common. They’re strange appointments for their post, and seem to have the highest possible political protection.

The fact that they seem to have that protection suggests that other people close to Number One may also benefit. It is of course common at this point to mention the name of a certain well-connected family. But it could well be someone else.

This looks like it could be a long war. The ANC clearly wants Muthambi to reverse her decision, the people pushing for this will have support from the SACP. But they are up against the one immovable force in our politics. Muthambi is likely to try to push the process along as quickly as possible, to a point where it cannot be reversed. Those in the ANC probably don’t have much time.

But this could be brutal. If Muthambi loses, and she is in fact a proxy for Zuma, that could dangerously upset the whole apple cart. If she wins, some senior leaders in the ANC are going to lose more than just face. When the stakes are high like this, almost anything can happen. DM