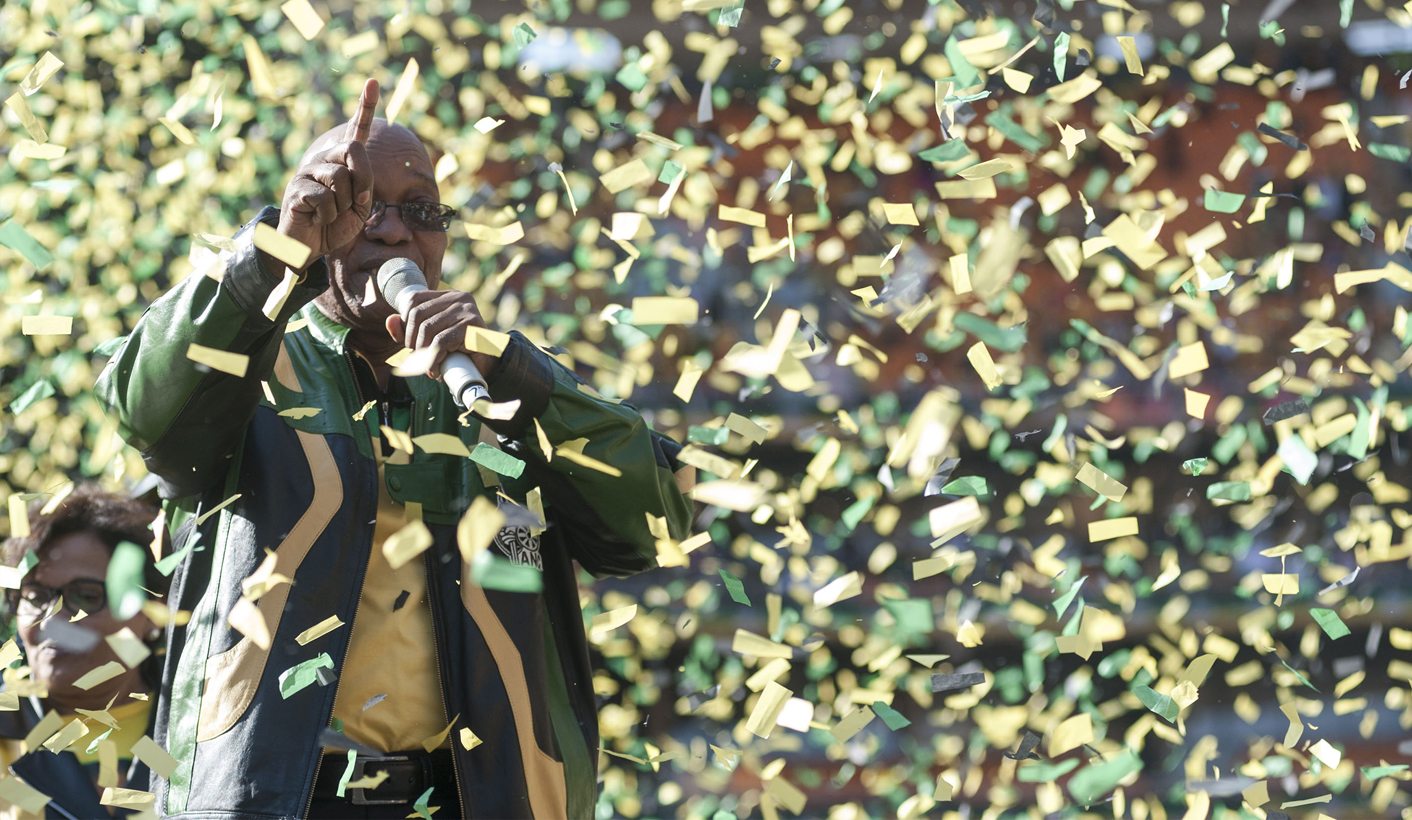 The ANC really does want to change the country. It makes no bones about it. The problem has always been into what, and how. ANC conferences such as its National General Council are about just that. This time, the changes the ANC wants to make are massive. It wants a wealth tax to be considered, for South Africa to leave the International Criminal Court, and, more complex than all of that, it wants accountability at the SABC! By STEPHEN GROOTES.

For most people, the big, if not entirely surprising news to come out of the ANC’s national general council, is the decision that South Africa must withdraw from the International Criminal Court. It does have a sense of drama about it; the Reuters et al reports on the decision will have literally flashed around the world. Of course it comes after our government disobeyed a North Gauteng High Court ruling that Sudanese leader Omar Al-Bashir be detained in South Africa to face genocide charges in The Hague. The person who made the announcement, Deputy Minister in the Presidency Obed Bapela, says delegates did not come to this decision because their views on international justice have changed. Rather, he says, with sorrow and disappointment in his voice, it’s because “some countries act in line with their own selfish interests”. And he’s shocked, shocked he’ll tell you, that some of the Western countries which try to bring people before this court haven’t themselves signed up to it.

Of course, there’s no mention of the kind of person Al-Bashir is, about his long, proud and noble track record in helping and uplifting his people, particularly the marginalised and down-trodden in Darfur. Just a rant at the West, because it’s the West’s fault. When asked, by some cheeky hack at the back of the room (I think I know who that may have been – Ed) if “human rights was still the light that guided our foreign policy”, Bapela said that we “still fly the flag of human rights” but that we also need to act within our own self-interest.

You can feel your chest puffing up with pride, can’t you? Especially at this new understanding of the term ‘self-interest’? Perhaps a slight whiff of North Korea there?

Of course, the issue here isn’t that South Africa is really any different from other countries, as someone wise pointed out very long ago “foreign policy begins at home”. It’s that, at one point, we claimed that human rights did matter, and now we have truly abandoned that thought. Just as Tony Blair once did. But at least, we’re now being honest about it, because if you consider the Dalai Lama affair, it stopped mattering a long time ago.

So often at ANC conferences, the most important commission is the one that reports last, and often for the shortest time. It is the Economic Transformation Commission. It’s usually shoe-horned just before or just after the last plenary session. And it often has the least to say. In this case there was something that sounds dramatic, very dramatic in fact, though it probably won’t be in the end, then it hits the reality check.

The commission’s chairperson, Enoch Godongwana was very careful about how he phrased it, and he warned that it may sound exciting but that people should not be too excited. In the end, the resolution, word for word, is this: “Consideration must be given to this aspect, and to explore its feasibility, and if possible, how do you do it.” But, at the same time, he stressed that, “we have not decided to bring in a wealth tax”.

Well, Mr Godongwana, you can’t have it both ways really. But it certainly sounds as if your commission was a little divided on the issue. There are at least two reasons why this is unlikely to ever become government policy under the ANC. The first is that it is very difficult to implement, many people will find ways to hide their wealth, along with the fact that some of those targeted will in fact be people who themselves have lobbying power in the ANC. And of course, we already pay a wealth tax in this country, it’s just called a progressive tax; the more you earn, the higher the percentage you pay.

But the second reason is probably stronger, from a political point of view. It’s that Julius Malema would promise to implement a wealth tax at twice whatever the ANC promises. As unrealistic as it may be, Malema could still score a significant victory, and many votes, with a promise like that. On the other hand, there’s also a threat of the ANC losing the suburbs for a generation; nothing would push urban and suburban black voters into the arms of the Democratic Alliance more quickly than being told they have to pay such a thing.

But perhaps the most fascinating commission to report back was the Communications Commission. Its chairperson, Lindiwe Zulu, explained how delegates had resolved (again) to ask Parliament to investigate the feasibility of a Media Appeals Tribunal, but in line with Constitution. If you’re suddenly having an urge to start partying like it’s 2007, that’s because the Polokwane Conference resolved exactly the same thing. The idea has not been taken off the table. However, Zulu then followed it up with this unbelievable quote: “We are saying, we want to deal with the negative narrative, and part of the way we can do it is to finalise this idea of the Media Tribunal.”

In other words, to stop the “negative narrative”, the ANC wants newspapers to be regulated.

That really is madness. It’s basically saying stop reporting on us in negative light or we’ll do our best to stop you from reporting at all. It’s a quote that’s most likely come back and haunt Zulu one day.

That said, this idea is about to celebrate its eighth birthday and it has still not been implemented. And while it would feel realistic for the South African news media to panic just a bit about it, the reality is that there will be serious difficulty in turning this idea into a reality: the opposition to it would be fierce and from just about every sector of society, save perhaps the media houses under the influence, or direct control, of the ANC and its deployees. And it would certainly meet with a significant legal challenge that it would likely lose in the Constitutional Court.

Zulu’s commission’s statement on the issue of the SABC was just fascinating. It wants “accountability and stability” at the public broadcaster, it wants the government to intervene, it wants there to be an end to the chaos, it wants “those who are deployed in government” to take strong action. And of course his name wasn’t mentioned, but it was all about Hlaudi Motsoeneng.

Then, in the same breath, the party also wants to force the government to change the decision about digital terrestrial television. This is a complex area, but in short, government has decided to go with unencrypted digital television. Broadcaster e-tv says this will weaken it in the longer run, because it will not be able to protect its content from piracy, which means it won’t be able to buy good content, which means its product, and its news bulletins, will suffer. At the same time, the SABC and the public protector’s favourite Motsoeneng have strongly backed un-encrypted signals. At the same time, Motsoeneng has signed that huge deal with MultiChoice, which appears to stand to gain hugely from a decision to go the un-encrypted route (basically, MultiChoice would still be able to protect its content, while free-to-air competitors would not). Now, Telecommunications Minister Siyabonga Cwele, who belongs to this commission, says we can’t have a situation where some people benefit, and where the public broadcaster has been “captured” by capitalists.

The person responsible for both the SABC mess and this digital television decision is Communications Minister Faith Muthambi. She is the person the party is demanding take action. Where was she while the commission was discussing all this? In the commission. The flies must have had fun.

In 2012, the Mangaung Conference resolved by acclamation to implement the National Development Plan. We’re still waiting

All in all, the ANC delegates who came to discuss policy had a busy time. But, as always in the ANC, a decision taken at a conference isn’t even really the beginning. It’s the implementation that’s the problem, and now the battlefield moves there. Onward to 2016. DM