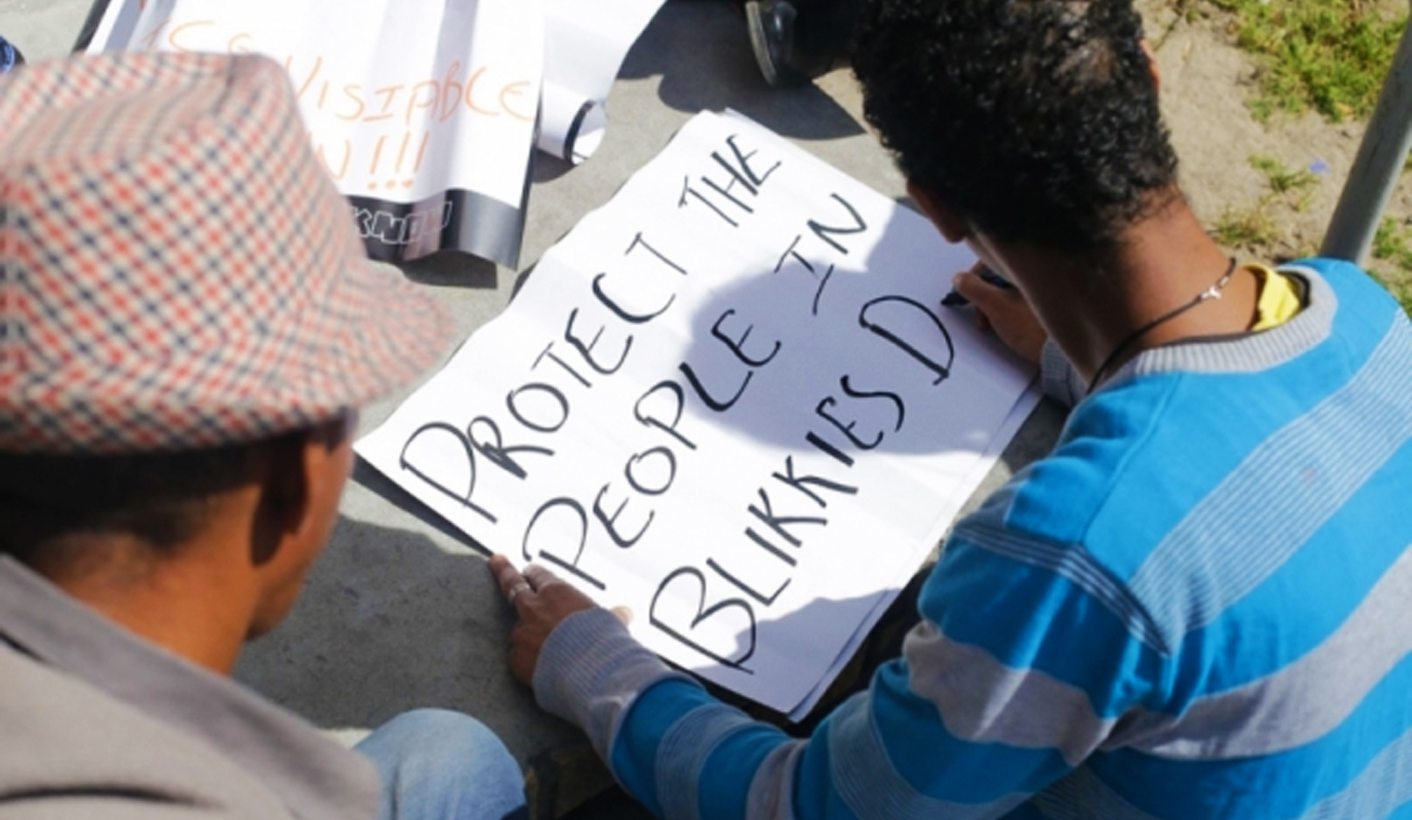 Blikkiesdorp residents picketed outside the Delft police station and the Cape Town Civic Centre at the weekend to call for increased policing in the area. Community members have attributed the spike in crime in the area to an increase in gangsters and drug dealers. By BARBARA MAREGELE for GROUNDUP.

Blikkiesdorp residents are calling for better policing after a spike in crime in the area. Seven families have already been moved to Wolwerivier at their request by the City of Cape Town. Residents picketed at the weekend outside the Delft police station and the civic centre in the city centre to call for increased policing in the area. Community members have attributed the crimes to an increase in gangsters and drug dealers in Blikkiesdorp.

The Delft Temporary Relocation Area, situated off Symphony Way, was established in 2008 to manage the illegal occupation of N2 Gateway houses in Delft.

Since then, Blikkiesdorp has become home to hundreds of families from across Cape Town. The city’s mayoral committee member for human settlements Benedicta van Minnen said the city had been approached by seven families who felt ‘vulnerable’ in the area.

“They applied to the xity to be relocated. Due process has been followed and the city’s human settlements directorate authorised the move,” she said.

“They applied to the city to be relocated. Due process has been followed and the city’s human settlements directorate authorised the move,” she said. Some residents who remained in the area were angry about the group’s ‘sudden’ relocation on Friday. In an attempt to prevent the city’s anti-land invasion unit and law enforcement from entering Blikkiesdorp to demolish the shacks of the seven families, about 20 people blockaded the entrance to the area with burning tyres and rubbish.

“What makes them special? We are all scared and we all don’t want to live here anymore,” resident Nikita Michaels said of the families that have been moved to Wolwerivier.

After the families were escorted from the area and their shacks demolished and removed, the remaining residents gathered to demand better policing.

Joining the picket, resident Faghreyah Hendricks said she feared for the safety of her grandson every day. Hendricks said her family’s shack had been petrol bombed in November 2012, killing her 20-year-old son and five-year-old granddaughter. Her grandson, Zubair, now four years old, suffered severe burns over his body. “One bomb landed near Zubair. We still don’t know why. To this day nothing has been done. I have to stay there because there’s nowhere else for me to go. I already struggle to look after him. Now I worry every day: is he is safe?” she said. Hendricks said she relied on a pension and child support grants to buy groceries for the month.

A member of the Blikkiesdorp Joint Committee, Ettienne Claasen, said he had asked for increased policing in a meeting with the Delft police last week. He said one police vehicle was subsequently sent to patrol the area for only an hour.

“There are about 15,000 people living in the area. People are angry about this response and want answers. The people living here don’t feel safe. We are asking for more police and a satellite station,” he said.

Claasen said regular patrolling was needed for people to feel safe in the area. “Gang violence erupted (last week) and two were killed. We believe that the sporadic violence is as a result of the multiple social problems that come from living in a dense and unprotected living space. Police must patrol every hour throughout the area,” he said.

Photo: The homes of the departing residents were demolished by city workers. Photo by Juliette Garms.

Nkwame Cedile of the Open Democracy Advice Centre (ODAC) said the lack of safety had adverse effects bigger than crime and criminality in the area. Many children stayed at home because they were too scared to walk to school. ODAC supported residents’ call for increased policing in the area, he said.

Right2Know campaign organiser Vainola Makan, who has been assisting the community, said: “As a result of the many social challenges here, there will always be outbursts like this. The main issue is that the city needs to provide the people with decent and adequate housing.”

Western Cape police spokesman Andre Traut said police had joined forces with neighbourhood watches and street committees in an attempt to address the issue of crime in the area.

Traut said recent Operation Fiela operations conducted jointly with law enforcement and traffic services had helped combat crime. “During the most recent operation on Thursday (17 September), 41 premises, 35 vehicles and 1,025 people were searched. As a result of this operation, three people were arrested for possession of stolen property, four people were arrested for possession of drugs and ammunition and one person for selling alcohol illegally,” he said. He did not respond to a request to comment on the residents’ demands. DM