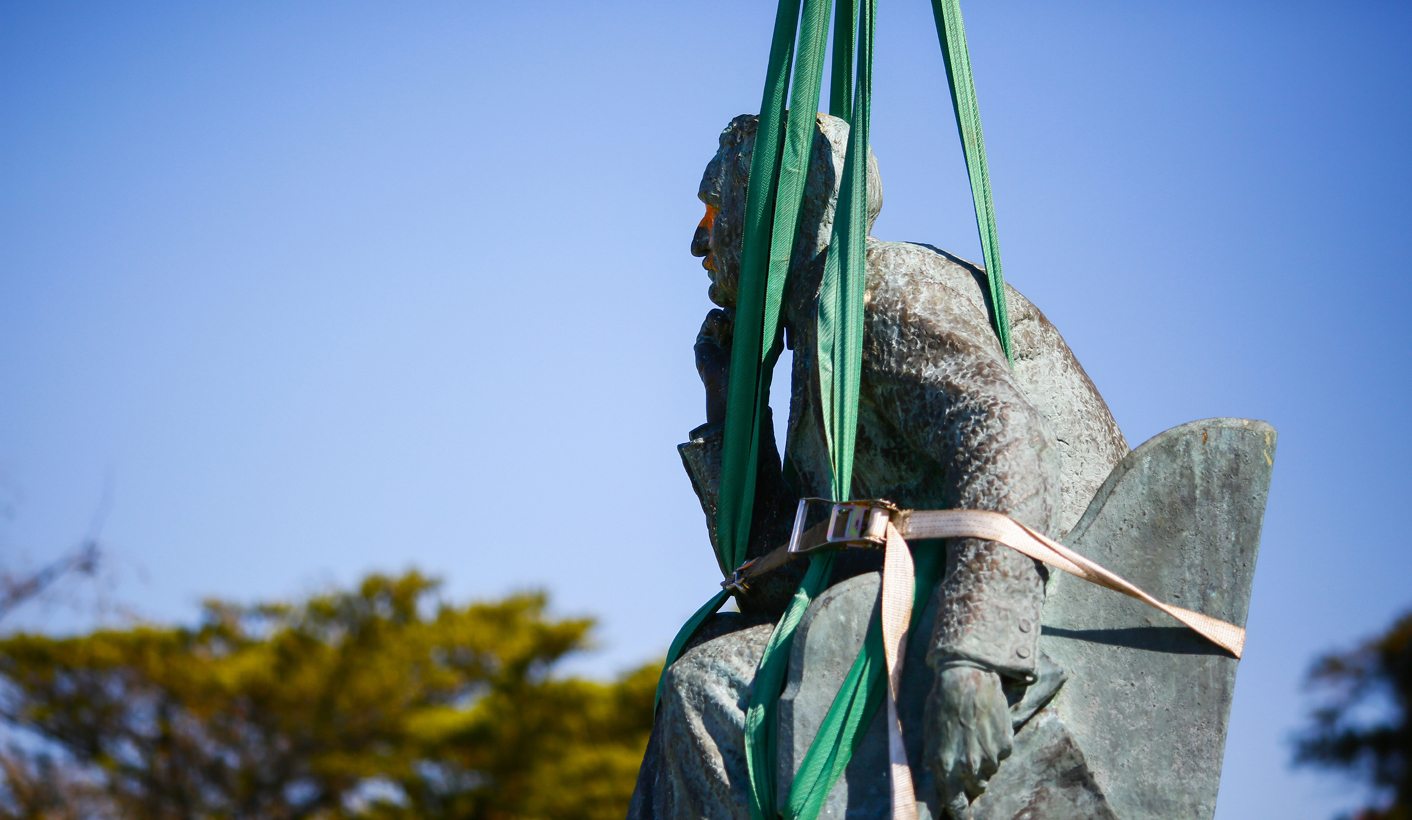 File photo - The Rhodes statue at UCT before being removed. Photo supplied. RhodesMustFall-response-to-Rebecca-Hodes.jpg

In response to an article by Rebecca Hodes, How Rhodes Must Fall squandered public sympathy. By #RHODESMUSTFALL movement.

It is incredibly regretful, but not altogether surprising, that we have received a critique from a historian at the University of Cape Town, who has gone to great lengths to ignore the contributions of the #RhodesMustFall movement by de-historicising and de-contextualising our activities, as though we have behaved in a manner inconsistent with our politics. For the benefit of the public, the #RhodesMustFall movement would like to set the record straight.

It has become increasingly clear the further we move away from the events of March 9 that many of our so-called sympathisers are in denial of the objectives of our movement. On that fateful day, our comrade Chumani Maxwele threw faecal matter he had collected from bucket toilets in Khayelitsha onto the visage of the now infamous statue of Cecil John Rhodes in an effort to highlight the uncomfortable realities of degradation and oppression. This act of political expression served as a rallying call to students, staff and workers alike whose political consciousness resonated with the significance of the message emerging from the birth of #RhodesMustFall.

This union brought together the three pillars of our movement: black feminism, Pan-Africanism and black consciousness as we began to forge an alliance  predicated on the centrality of black pain. The three pillars of the movement informed our mandate of decolonisation which extended from the university context in which we found ourselves, but actively sought to dissolve the boundary between the ivory tower and society.

Our initial demands detail a long list of objectives that provide concrete steps towards what we understand to be a path of decolonisation. These demands included an immediate increase of the salaries of the workers of the University of Cape Town (UCT) in solidarity with the position they themselves had articulated, towards a dignified living wage in the spirit of Marikana. It also included a complete overhaul of the symbols and artworks across the university landscape. #RhodesMustFall called for the urgent need to radically reassess the situation of meagre numbers of black lecturers in faculties across the campus and UCT’s abhorrent demographic statistics in general. This was accompanied by the demand to implement a curriculum which treats African discourses as the point of departure – through addressing not only content, but languages and methodologies of education and learning – and a legitimate lens through which to view and examine the world. Naturally, such a demand implies a replacing of one set of traditions with another and only making use of Western traditions when they are deemed relevant to our own experience.

In the initial phases of our movement, as Rebecca Hodes disingenuously reflects, we encountered considerable backlash on social media. In particular, we saw a refrain that continuously sought to reduce the complex oppression, institutional racism and marginalisation of black voices in UCT to the removal of the statue. It is true, initially the chattering classes were almost unanimous in their support for what was then merely a campaign.  And Hodes is again correct to say that the success of the movement lay in how we were able to turn the tide of the debate. The presence of the statue of Rhodes enabled us to fully explore the implications of its presence 21 years into democracy and ushered in an interregnum – for lack of a better word – during which we were able to think and feel our way through the status quo. This we did through continuous protest, public art, and education initiatives that centered around our occupation of the administration building, Bremner, then referred to as Azania House.

We did not seek, nor did we expect, unanimous support from the university or society. The politics of the movement clearly dictate an antagonism to the liberal university in its conception, with particular reference to the role of the post-colonial elite institution in maintaining the status quo which we unambiguously desire to deconstruct.

In this way we do not anticipate nor do we rely on the support of white liberals in the pursuit of this objective, so to see previous support for our movement as something valuable that has been lost, as Hodes has implicitly done, is simply another example of the arrogant pathological behaviour of white liberals who see themselves as so integral to the pursuit of social justice that their acceptance and participation is sine qua non.

White liberals, the Chimurenga will happen with or without you.

We reject the lazy eye and wondering gaze of white liberal intellectuals like Hodes who wilfully ignore our desire to debate, engage as we endeavoured to resolve our own complicity and contradictions. In fact, in our first archival project published through the Johannesburg Workshop for Theory and Criticism is an extensive examination of our positions, limitations desires and contractions and we welcome engagement on those works.

Despite Hodes’s clearly limited understanding of how structural racism works, we would like to publicly state that we reject the defence of university management as being “unorganised lefties”, as she claims, as if somehow this exempts them from facing continued exclusion and exploitation.

Without decolonisation any university management will invariably be complicit in the continued crimes that constituted this space to begin with.

It is perhaps this key failing, the inability of white liberals in particular, to accept and understand the structural drivers of oppression, that have led to the disdain and utter contempt we face for the proud assertion of liberal values from the likes of Hodes.

The irony is not lost on us when she daringly proclaims: “When race is the primary and decisive factor through which intellectual value is ascribed we are in trouble.”

We remind her and her sympathisers that this is precisely the objective of the white supremacist superstructure and it is precisely because “whiteness” is normalised in our institution and in our society that we make special efforts to promote black consciousness.

This is a basic principle of black power.

In the next phase of our development of our movement we prepared to stand in solidarity for justice for Marikana. This decision was not in any way coincidental, in fact the connection was at the forefront of our conceptualisation of the movement as we decided to organise under a decolonial mandate at this decisive time in South Africa’s history. In our decision to focus on Cecil John Rhodes as a central symbolic figure of the legacy of colonisation, it was clear that the material and ideological realities of UCT related to that very legacy. In light of the historic context of this space and in cognisance of its continued collusion with neo-colonial enterprises that have caused havoc on the continent, the #RhodesMustFall movement planned and articulated its direction.

Again, Hodes wilfully ignores the volume of content that we published, on this occasion through Vanguard Magazine as #RhodesMustFall sought to attack head on in an effort to contribute to both decolonisation and justice for Marikana.

Our campaign reached its high point on August 20 2015, when Association of Mineworkers and Construction Union head Joseph Mathunjwa and James Nichol, who was involved with the Marikana commission, flew down to join the movement as we marched on campus.

In an interview with the African News Agency, Mathunjwa himself acknowledges the connections made by the movement: Mathunjwa said the Marikana miners supported the actions of the Rhodes Must Fall movement. “You must recall that when the miners were striking in 2012, they were looking to undo the legacy of Cecil John Rhodes. So, it is natural that they will support the actions of the RhodesMustFall movement and they appreciate the solidarity shown here today.”

In closing, the #RhodesMustFall movement would like to call for both constructive criticism and support in light of the work and in the spirit of the mandate we carry so as to bolster our collective efforts and not simply dismiss them as the incoherent, aimless and disjointed wonderings of black students who are angry for no reason.

At this very moment we are preparing to join a university committee that is being constituted to drive forward curriculum reform and we have been invited to participate in a transformation working group by the university management out of a recognition of the work that we continue to do, and so we urge the public to look beyond the ramblings of the likes of Hodes, whose consciousness lags far behind the paradigm shift our movement is determined to help bring to Azania.

For the historian who brought us here we really only have one thing left to say to you: Careful Rebecca Hodes your colour is showing. DM

Photo: The statue of one of apartheid’s architects Cecil John Rhodes is bound by straps connected to a crane prior to its removal from the University of Cape Town (UCT), South Africa, 09 April 2015. EPA/NIC BOTHMA