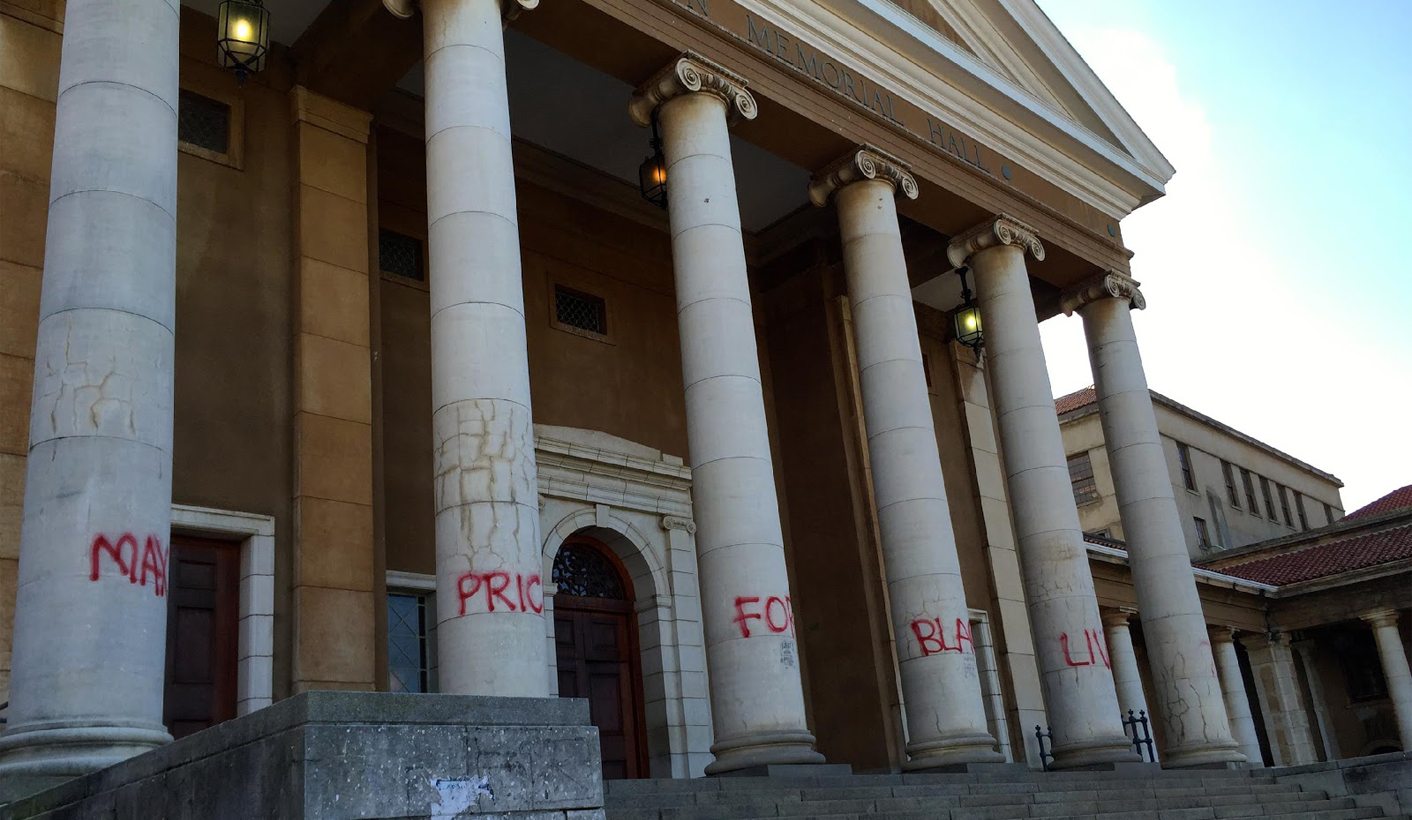 In its earlier inception, the Rhodes Must Fall movement garnered widespread public support. But in its latest actions, and its support for vandalism on campus, it has squandered its moral higher ground. By REBECCA HODES.

In the initial weeks after its emergence, the Rhodes Must Fall movement at the University of Cape Town (UCT) garnered widespread support among students, staff and the public. Despite the controversial use of human excrement as a medium of protest, and the violent outbursts of at least one of its leaders, the movement seemed to convey something wonderful and inspiring: the rebirth of mass student action. In comparison to the radicalism of the anti-apartheid student movement, campus activism, particularly at privileged universities, seemed staid for the first decade of South African democracy.

Many criticised the use of faeces in the protest at UCT which ignited the founding of Rhodes Must Fall, including a vocal group of students and staff. However, as opponents decried the recourse to ‘poo politics’ – often in terms that were racist and infantilising – sympathisers were at pains to highlight the political significance of shit in South Africa. They discerned in the protest, led by student Chumani Maxwele, an indictment of the failures of sanitation services. This was a connection drawn by Maxwele himself. Although, in his aggression towards the security guard who was merely doing his job, Maxwele unwittingly embodied another dreadful and persistent South African reality: the valorisation of violence.

In the weeks after the first protest, the Rhodes Must Fall movement exploded in popularity. It garnered over 10,000 ‘likes’ on Facebook, an expression of the digital activism through which the group has flourished. However, as the semester progressed, and its rhetoric grew more vitriolic, so support dwindled. In contrast to media portrayals, and to the movement’s self-styling, Rhodes Must Fall never garnered unanimity among students, staff, or even its own members. It has, however, tapped into a deep seam of anger over the lack of transformation in the South African academy, stoking fresh and fervent debates about vexed issues of curricula transformation, race-based admissions, and, perhaps most controversially – identity and authority: in essence, who should be permitted to speak, and who should be silenced.

Alarming here was the public scapegoating of academics who criticised aspects of the movement, including what some perceived as a unitary framing of transformation. Critics noted that, in post-1994 South Africa, race is a powerful, but partial, proxy for privilege. Among these were senior scholars censured by the apartheid state, who have devoted their own careers to understanding poverty and equality in South Africa, and who have educated generations of students in how to conduct their own analyses. The seeming requirement, among both students and staff, for academics to pledge allegiance to Rhodes Must Fall, and to avow a particular practice of transformation, raised the question: Why should academics think unanimously about anything?

This is, of course, a typical liberal response, unpopular in an environment in which ‘liberalism’ had become an insult – an epithet of elite capitulation, rather than of respect for individual autonomies. Attacks on liberalism, replete over the course of the Rhodes Must Fall protests, are the result of this ideological essentialising. The modern university is, itself, in part a product of liberalism. Freedom of expression and a tolerance for arguments that are distinct to yours are liberal values, related to universalism and the commitment human rights.

Liberalism does not dictate adherence to free market accumulation, but could equally mean the pursuit of egalitarianism and social justice. It is a broad and mutable ideology, including within the South African academy. Instead, its ideological demonisation exemplifies the reductiveness to which both supporters and critics of Rhodes Must Fall have resorted. Intellectual truisms have been established, recycled through protests, convocations, seminars, op-eds and social media, and honing in on race.

When race is the primary and decisive factor through which intellectual value is ascribed, we are in trouble. As one academic in the humanities faculty explained: “There’s a conservative way to teach Fanon. There’s a radical way to teach Chaucer.” At the risk of rehearsing another trite characterisation, it is my experience that senior academics at UCT are mostly disorganised and exhausted old lefties, rather than racists upholding a colonial legacy and advancing an exclusionary agenda.

It was inevitable that vice-chancellor Max Price become the fall guy for the Rhodes Must Fall movement. As the figurehead of the institution, albeit a fractious and diverse one, Price is held as its key authority, a lightning rod of blame for assorted opponents, activists and kvetchers. It is Price who must account for racism (alleged by Rhodes Must Fall) and for hooliganism (alleged by peeved alumni). As one academic described it, Price has become a ‘metonym’ for UCT’s failures, a stand-in for every administrative, logistical, fiscal and ideological problem of this enormous, unwieldy body. Allegations that Price has been powerless and ineffectual, or that he has been partisan towards a particular lobby (students/staff/donors), are themselves revealing. What is imagined and ascribed is a kind of omnipotence, vested within the figure of the vice-chancellor. In reality, no single person at UCT is endowed with that power: not donors, not charismatic teachers and not student leaders.

Photo: A placard at a Rhodes Must Fall protest at UCT’s Upper Campus reads ‘#Max Price Stop Threatening Us’ and “#1Bullet’, May 7 2014. (Rebecca Hodes)

In its earlier inception, as it searched for a programme of action, the Rhodes Must Fall movement was inchoate. As it sought to develop a coherent set of objectives, it honed in on personal allegations, often directed at Price. At other times, the movement’s messages seemed purposefully vague and confounding, even for the most creative of discourse analysts. Hashtags stood in for arguments, and these became free-floating signifiers, extinguishing, rather than oxygenating, debate. At the last protest I attended, I approached a student to ask what she meant by the placard she was carrying. Her reply, delivered with spitting animosity: “Go do the reading.” Slogans on display at this protest included #1Bullet’, a crib of hate speech from the 1980s.

From its outset, the Rhodes Must Fall movement has toyed with different interpretations of protest and vandalism, blurring the line between political comment and public defacement. Last weekend, the third anniversary of the Marikana massacre on August 16 2012, campus was vandalised in a statement of misguided memorialisation. The Tokolos Stencil Collective, a street art collective, claimed responsibility, but Rhodes Must Fall leaders conveyed their explicit support for its action. The movement’s Facebook page declared ‘solidarity’ with Tokolos, and provided a hyperlink to the feed in which Tokolos took responsibility. In a Youtube clip directed at Price, Rhodes Must Fall leaders explained that Marikana would be the focus of their new campaign.

I believe in the potential for street art to serve as social commentary. I believe the Tokolos Stencil Collective has made a powerful and decisive contribution to freedom of speech and expression in South Africa. Their defacement of an advertisement for designer sunglasses masquerading as a tribute to Mandela on the Sea Point promenade is one of the most effective ‘culture jams’ in the post-apartheid era. But those who spraypainted the pillars outside Jamieson Hall, and other iconographic sites around campus, are guilty of vandalism.

The Jamieson Hall spraypaint features a word in red on each pillar, chiming with the Rhodes Must Fall allegations that UCT has “blood on its hands”. It states: “Max Price For Black Lives?” – one uppercase word for each pillar. The slogan is purposefully ambiguous, meaning to both claim that Price is a racist who does not value black lives, and to pun on the word ‘Price’. It seeks to reference Marikana, but is more obscure than evocative.

This latest assault on Price must not be countenanced or tolerated by those who it affronts. It must be recognised and condemned for what it is, an insult on the integrity not just of the university’s figurehead but of the institution as a collective.

Further down the Jamieson Steps, the memorial to the lives lost in World War I and World War II was also vandalised. This is the second instance, since the emergence of Rhodes Must Fall, of its defacement. This is partly due to the memorial’s proximity to the Rhodes statue (“Fuck Rhodes” was painted across the stone in the first instance). It is also a consequence of a historical misunderstanding of the world wars as ‘white men’s wars’, an interpretation as ironic as it is misguided. To discount the importance of the World Wars diminishes the contribution of black South Africans, a historical erasure which is the opposite of how history students should approach their commemoration. Instead, they should focus on how to enrich and expand historical accounts of the wars, to people the archive, rather than to negate the contribution of black citizens to national and global historical events.

In sweeping aside the heroes of a certain past, those at the forefront of this movement, who claim authority through violence and vandalism, seek to establish themselves as heroes. But, in this, they have under-estimated the commitment of university members to reasoned and respectful debate – the primary values of the academy. The current leaders of Rhodes Must Fall will not attain the martyrdom they seek. Instead, they will expose themselves as the bullies they have become. DM

Rebecca Hodes is a historian based at UCT.