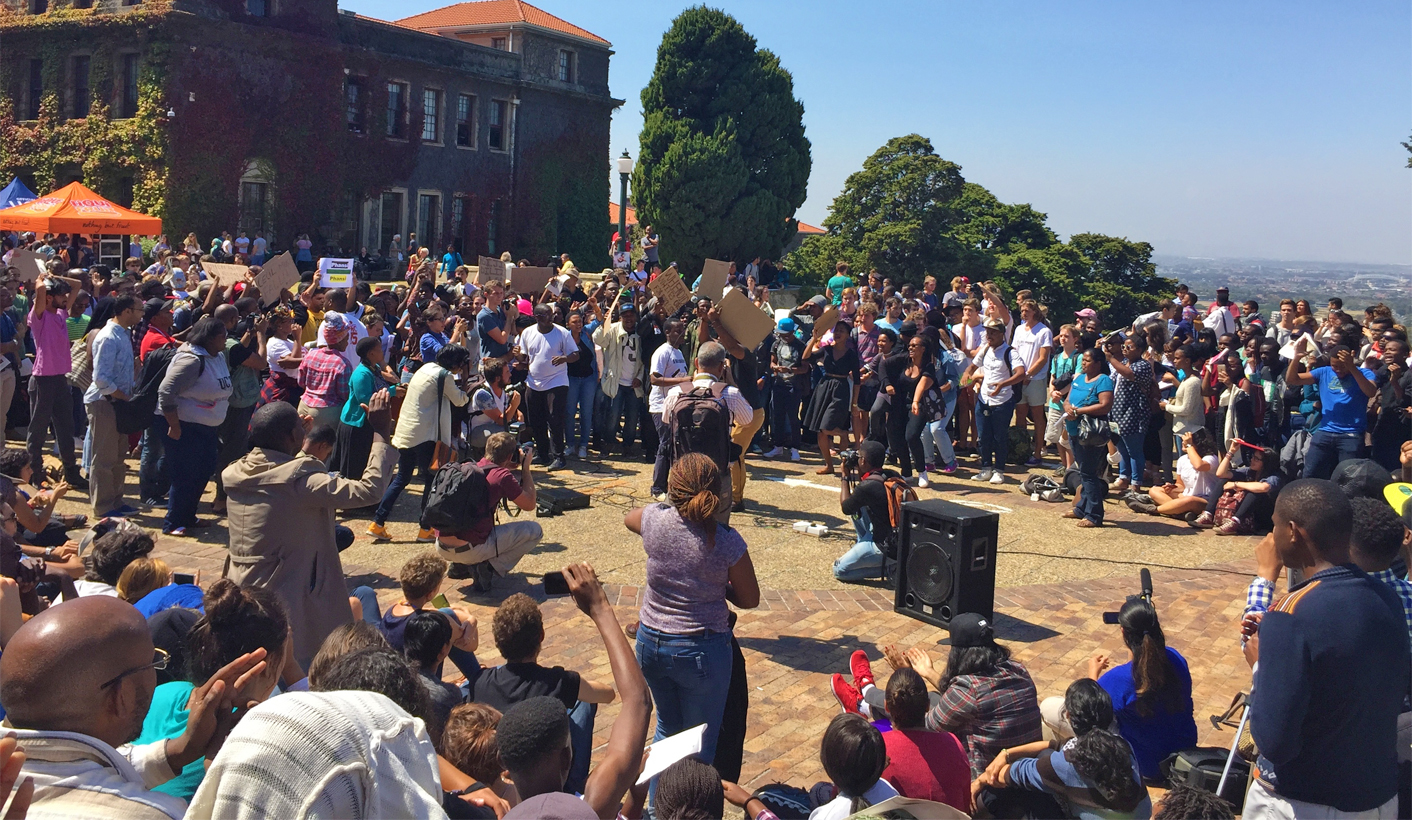 The controversial actions of a UCT student to protest the continued display of a statue of Cecil John Rhodes through dousing it in human waste evoked an outpouring of support from fellow students. Their collective response reveals much about opposition, resistance and transformation in the South African academy. By REBECCA HODES.

On 9 March a student named Chumani Maxwele staged a political protest against the lack of racial transformation at the University of Cape Town. His choice of protest site – the statue of Cecil John Rhodes at the foot of the Jameson stairs – and his medium – human excrement – were meant to cause maximum offense. They were meant to inflame university authorities, confront students, and incite the public.

The sculpture of Rhodes is the most controversial monument on UCT campus. It is a tribute to a man who, more than anyone else (with the arguable exceptions of Frederick Lugard and Belgium’s Leopold II) has come to embody the colonial dispossession and oppression of Africans. The statue’s stand-alone persistence at the heart of the University’s upper campus is itself a matter of wonder. As the Rhodes Foundation has sought to re-brand itself, to re-imagine its legacy, including through an alliance with the Mandela Foundation, it is surprising that the statue still exists as it does – unmediated by an oppositional placard or sculptural riposte to the validity of Rhodes’ vision.

There are many other monuments to Rhodes around Cape Town such as the one that stands in the Company Gardens. In UCT’s version, Rhodes sits pensively, in the repose of Rodin’s ‘The Thinker’. In the Company Gardens version, he is more dynamic. Standing and pointing towards the north, captured for posterity in his assurance that: ‘Your hinterland is there’.

Then there’s Rhodes Memorial, a site which has formed the backdrop for so many local newlyweds – an iconic setting for nuptials that has little to do with politics, and much to do with good light and a view.

The existence of the Rhodes statute at UCT is something that Vice-Chancellor Max Price has himself questioned. In his introduction at the inauguration of UCT’s Dean of Humanities, sociology Professor Sakhela Buhlungu, Price named the statue as an example of UCT’s colonial legacy.

It was only through a feat of imaginative interpretation that Rhodes’ will was re-interpreted to allow scholarships to be granted to students who are neither male nor white. What is certain is that the executors of Rhodes’ estate have their work cut out for them.

As with the duties of estate executors, the bureaucratic wheels of universities grind slowly, and are fettered by obligations which may be arcane and uninteresting to those who want more immediate transformation. Among these are the students and staff members who walk past the statue everyday, and perceive its continued existence as a deep insult, a symbol of all that is wrong with UCT and with South Africa – the failure of racial transformation, the power of white privilege, and the persistence of racial subordination.

The actions of Maxwele have been questions by students at UCT and other institutions. In an interview of UCT radio, UWC Law Student, Abongile Mjokozeli opposed the use of faeces, arguing that it demeaned the dignity of political resistance.

But what was clear from Thursday’s event was that, while the poo protest was enacted by one student, his anger and frustration at the lack of transformation at UCT are shared by thousands of others. On Thursday a meeting was held on the Jameson stairs, attended by an impassioned crowd. Speaker after speaker rose to convey fury and to vent frustration at UCT’s institutional racism. Some got up to disagree, to condemn what they perceived as a violation, a ploy in intimidation, and an attempt to polarize UCT’s student community. Others advanced mixed opinions, condemning the medium of protest, but supporting its target site.

Boos and cheers, constant interruptions, and running commentary from the crowd, revealed the flourishing of critique and subversion on campus. And while the source of students frustration – a lack of transformation – focuses attention on the many challenges that UCT faces, the fact of its articulation also testifies to the academy’s success as a site of foment and opposition.

Photo: The crowd on the Jameson stairs (Rebecca Hodes)

That the speakers remained mostly audible, and the crowd united, was thanks in part to masterful chairing. It was also due to a collective commitment both to talk and to listen, to uphold the respectful, if shambolic, rules of engagement that are fundamental to constructive and inclusive dialogue.

This is not to claim the protest action as a victory for the South African academy, nor for UCT. Rather, it is to acknowledge the passion, articulacy and charisma of the students who provided the kind of sophisticated and searing political critique that is the elusive ideal of Humanities Departments the world over. These characteristics are not a product of UCT as an institution. But, in manifold ways, they are supported by it and, more broadly, by the academy, by South African civil society, and by the political system of democracy.

Not all of the speakers supported a democratic logic, or one that necessarily advances intellectual or political transformation. At times, the colonial insult epitomised by the Rhodes statue clouded judgments, supporting misguided recommendations. To render history more immediate, one speaker reminded the crowd that the land we were standing on had been donated by Rhodes, in a contract ‘drawn in blood’. In the context of confronting the crimes of the past, what came next was perplexing: ‘His name must be blotted from the history books’, raising the question of how we are to confront the power of Rhodes’ legacy if not in relation to history?

The significance of history, and the necessity of its faithful and critical rendition, arose again in a meeting of students and staff who gathered later to discuss future protest action. Faced with the inevitability of institutional delays, and by management structures with expertise in diffusing institutional conflict, what should be done next?

One student recalled the removal of the statue of Saddam Hussein as an example of public action to remove monuments to tyranny: ‘They just went there, and took it down with ropes’, she said.

(But this is factually incorrect: the removal of the statue of Saddam Hussein in the Baghdad’s Firdos Square, on 9 April 2003, was not the heroic public action initially portrayed by the global media. The statue was toppled, not by Iraqis, by an armoured US military vehicle. It is thus not so much a symbol of popular resistance as of US military interventionism.)

Empirical facts, reasoned arguments and the resistance of partisan co-optation are among the best tools available to those who wish to champion the transformation of the South African academy. This ambitious objective raises many questions. How should students and staff members who want to diversify South Africa’s academy, to ensure a more robust confrontation with UCT’s intellectual legacy and its history, maintain their political focus? The best means of success may be through establishing a broad and diverse base of support among UCT staff and students. But this may only be possible if the campaign is focused and intent, incorporating the ideals of the UCT community at its most encompassing.

If symbols of the colonial and apartheid legacy, such as the Rhodes statue, become lighting rods for resistance and opposition, how are more deep-seated demands for transformation to be sustained? Herein lies the strength but also the weakness of such focused and personalized campaigns. What will happen to burgeoning public concern with corruption if, for instance, Zuma eventually pays back some of the money? Will the spotlight on corruption flicker?

Another danger is that the revelations of this campaign will have harmful consequences for UCT staff and students. This is related to potential political co-optation, evident in today’s protest. A leading member of the ANC in the Western Cape was given the microphone, and what he said was as pernicious as it was politically partisan:

‘The ANC national government has been tiptoeing around UCT. This cannot be handled with kid gloves.’

This was an apparent pitch for state intervention to curtail the independence of universities. And it is connected to growing demands for similar actions among executive state officials. It is also inseparable from calls for greater fiscal austerity measures to be brought against historically privileged universities in South Africa.

The reality is that UCT is already suffering from a lack of public funding because of the failure of the National Student Financial Aid Scheme (NSFAS) to disburse scholarships. In 2014, a R2,7 billion shortfall meant that thousands of students were deprived of the funding essential to support their studies. Faced with a financial catastrophe, the brunt of which was to be borne by students, UCT dug deep into its coffers to cover the funds, in essence to bailout the state. So yes, the ANC is correct that now is the time for the removal of gloves, but among seemingly ham-fisted government authorities whose role it is to write cheques from the public fiscus. Also, of course, for private donors, who bankroll much of the scholarship and research funding that keeps UCT financially afloat, yet threatened each fiscal year by deeper financial submersion.

By the early evening, the temperature on campus was cooling. At five o clock, a group of students gathered at the Rhodes sculpture. They were not there to cover it in excrement, but in cloth. They tied a sheet over the statue, and secured it with a bit of rope so that it wouldn’t fly away. One SRC member stood away from the gathering, speaking to another student across the road, renamed recently as part of the Mandela circle.

‘Come and join us’, entreated a friend in a black beret, ‘Don’t be counter-revolutionary’, he quipped. ‘This is protest’, said one student looking at the shrouded statue of Rhodes, ‘non-faecal protest’.

Armed with the intellectual tools to understand how oppression functions, how it persists and how it may be dismantled, some members of the next generation of South African struggle leaders will graduate with UCT degrees. Whether the hall in which they do so is still named ‘Jameson’ remains to be seen. DM

Rebecca Hodes is a historian who works at the University of Cape Town.