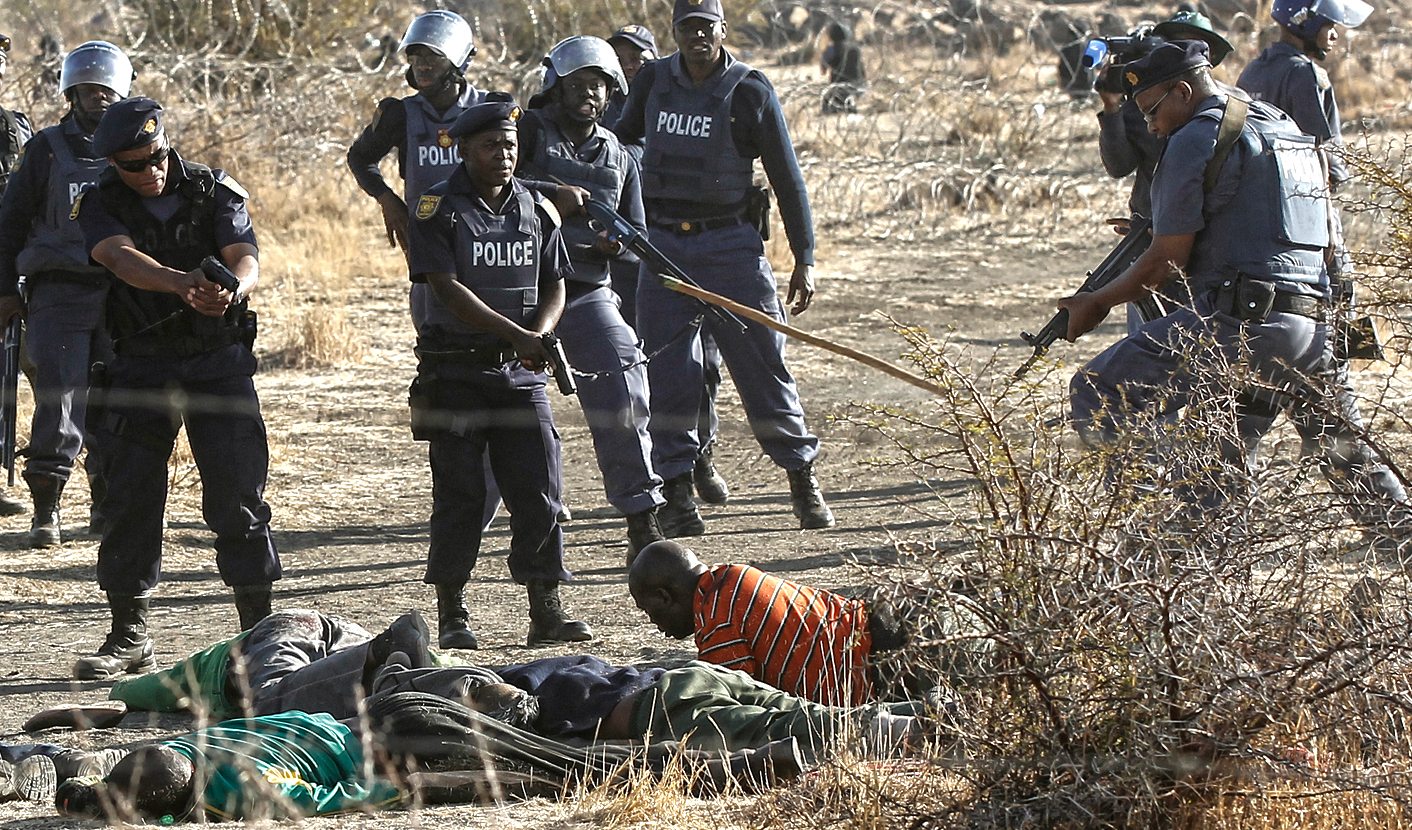 National police commissioner Riah Phiyega underwent a penetrating cross-examination at the Marikana Commission of Inquiry on Tuesday, as her testimony and role in the events leading to and following the 16 August massacre are probed. She was unable to shed much light, aside from reinforcing the idea that she is completely out of her depth in her new job. By SIPHO HLONGWANE.

There was perhaps no better metaphor for Phiyega’s dismal showing before the Marikana Commission of Inquiry than the sight of her sitting in the witness stand last week Thursday next to her legal advisor Tshegofatso Rantho, who helped her find her way through a thicket of paper in front of her, and occasionally whispered in her ear as the proceedings went on. At the time, she was being led by the SAPS advocate Ishmael Semenya, and not under cross-examination. Her statement was curt, and her answers reduced to one-word replies.

Rantho’s presence upset the other lawyers, who called on the commission chairman Judge Ian Farlam to rule that his interference was unprocedural. Phiyega also changed a statement she made, after initially saying that police minister Nathi Mthethwa ordered her to the scene of the massacre, to say that she merely informed him that she would go.

All in all, even with the help of a trained legal professional, Phiyega’s time on the stand last week was unconvincing. This was before the cross-examination began in earnest this week.

Under the attention of commission evidence leader Mbuyiseli Madlanga on Tuesday, the police commissioner wilted even further.

The first order of business was Phiyega’s stance immediately after the 16 August shootings, which left 34 miners dead, 78 injured and hundreds arrested after a violent wildcat strike at Lonmin’s Marikana operation. Some 20 hours after the incident, she issued a statement that absolved the police of culpability by claiming that they acted in self-defence. Madlanga read from a statement by Hendrich Wouter Myburgh, a police officer present when the massacre happened.

Myburgh said that when the shooting was over, he went in search of injured people. He found three men on “the hill”, and then moved on. Suddenly he heard a gunshot behind him, and turned to see a national intervention unit constable holstering a weapon.

“I asked him what is going on. He replied by saying: ‘They deserve to die’ and he moved away,” Myburgh’s statement said.

Madlanga then asked Phiyega if she would continue to hold the self-defence line if the testimony was assumed to be true.

She responded: “I’m consistent in my view, given the sensitivity of the issue. I would be very, very cautious to answer such a question. It is difficult to say on this or that hypothesis.”

Farlam took exception to this answer, and reminded Phiyega that her deliberate attempt to avoid a question led to inferences being drawn.

When asked on Tuesday if she still stood by that, she said, “To the best of my knowledge, with the facts I was given at the time, I stand by my statement.”

Evidence heard at the Commission, and published in media reports, has largely refuted the police’s claim of self-defence. Especially damaging was the finding of the ‘second koppie’, where the large majority of the dead were gunned down from various angles by police. Testimonies and autopsies show that many men were shot in the back, suggesting that they were fleeing at the time. Some of the survivors told of men who were shot in the act of surrendering.

Whatever the findings of the Commission on police culpability, Phiyega’s impetuous statement was damaging enough for not being based on fact.

A slightly peeved Madlanga said: “General, the distinct impression that I get, and this is what we will submit at the end of the commissions proceedings, is that you rushed to issue a press statement that absolved South African Police Service (SAPS) from any wrongdoing without having taken steps to consider possible opposing versions. You rushed headlong.”

Phiyega seemed unsure of the role that Mthethwa played before and immediately after the massacre. When asked what specific support he played before the massacre, the commissioner replied: “He gave us political support.”

However, Madlanga continued, her own evidence did not suggest that Mthethwa made any initiative to help. He asked: “What, if anything, did the minister of police do about the killings at Marikana?”

Phiyega’s response: “My minister was personally here. The minister was part of the inter-ministerial committee that did a lot of work in the commission. In his political role he gave us political support.”

When asked once again what Mthethwa’s involvement prior to the shootings was, Phiyega simply referred to her statement once again.

Madlanga eventually threatened to draw the conclusion that Phiyega did not actually know much about what was happening.

It is not just the Commission’s lawyers that are painting a picture of an inept Phiyega, but the police commissioner herself is doing exactly that. After the limp showing on Thursday, and the resulting criticism, she dismissed the furore in the papers as sexism. She claimed that she was being judged unfairly for being a woman.

However, she herself acknowledged that she was not the most suitable candidate to be a police commissioner. “It is common knowledge that I have no previous experience as a police officer,” she said.

Phiyega was appointed just two months before the massacre, having previously worked in business and government bodies very far away from police work.

We may never know what President Jacob Zuma’s thinking was in appointing an inexperienced person to be the top cop in the country, but before the Commission, Phiyega’s ignorance is helping to obfuscate the actions of the police on the day. If they are indeed found guilty of murder, she may be absolved, but must then acknowledge that perhaps lives could have been saved if the police were led by someone who knew what they were doing and could provide leadership. DM