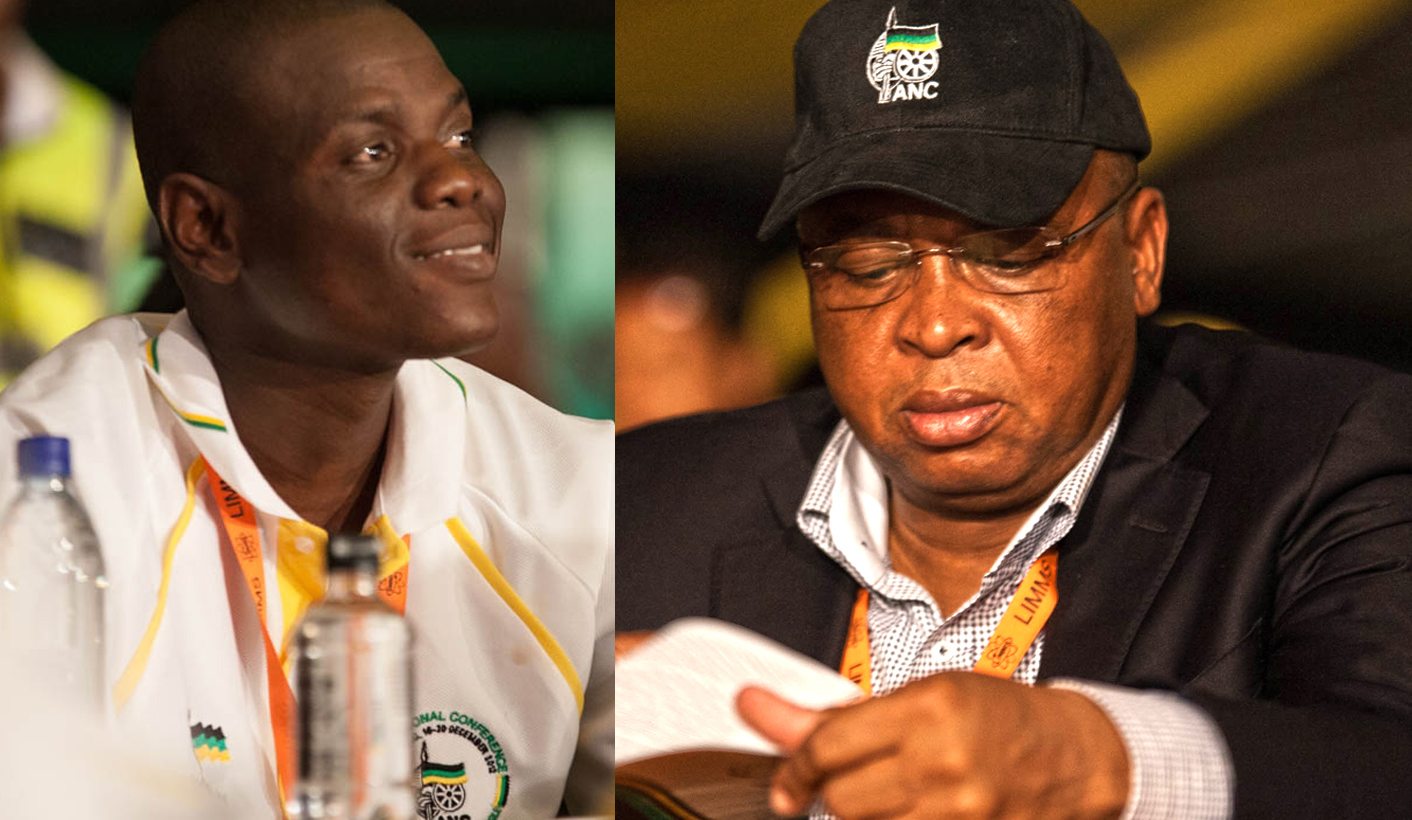 It took three months from the ANC’s Mangaung conference for a synchronised manoeuvre to decapitate the two structures at the forefront of the campaign to remove Jacob Zuma as party president. In a surgical strike, the leadership of the ANC Youth League and ANC Limpopo province have been disbanded in a massive and unprecedented cull of the president’s (former) detractors. While the Limpopo purge was very much expected, nobody is more stunned by the axing of the League leadership than its acting president Ronald Lamola, whose capitulation to the new ANC leadership backfired spectacularly. By RANJENI MUNUSAMY.

The words “Beware the Ides of March” are immortalised in Shakespeare’s Julius Caesar and somewhat relevant to the thespian nature of ANC internal machinations at present. “Ides” refers to the middle of the month, and ominous warning was delivered to Caesar by a soothsayer. Caesar ignored it and was assassinated by a group of conspirators, who included his close allies.

The ANC’s national executive committee (NEC) began a four-day meeting on Friday 15 March, and it was well known that the fate of the party’s Limpopo leadership and that of the ANC Youth League (ANCYL) would be on the agenda. As Daily Maverick reported last month, the axe has been hanging over the Limpopo’s provincial executive committee (PEC), particularly after a damning internal report produced by secretary general Gwede Mantashe’s office, showing that all five regions in Limpopo want the committee disbanded.

But when the ANC Youth League’s acting president Ronald Lamola and deputy secretary general Kenetswe Mosenogi were asked to leave this weekend’s ANC national executive committee (NEC) meeting, they must have felt like the dying Caesar uttering “Et tu, Brute?” as they did not expect to be in the firing line too. Lamola and Mosenogi had gone to the meeting quite confident that their wholesale surrender to the ANC’s leadership elected at Mangaung would have ensured their political survival and leniency towards their League.

After a public fallout with expelled ANCYL president Julius Malema late last year, Lamola silenced the League’s polemic and yielded to the will of the mother body on what should be done to rehabilitate it. Lamola was reported to have held closed-door meetings with President Jacob Zuma at Mangaung – despite being at the forefront of the campaign to replace him with Kgalema Motlanthe – and subsequently at Nkandla to pledge his support and to discuss his continued leadership of the League. None of this helped him; he now stands politically defeated and humiliated.

During the Mangaung conference, a fiery debate ensued after a proposal by the ANC in Mpumalanga that the ANCYL NEC be disbanded. The motivation for the proposed disbandment was the conduct of the League’s NEC and the suspension of ANCYL treasurer Pule Mabe. The conference eventually agreed to a suggestion by Public Enterprises Minister Malusi Gigaba no resolution to be taken on the matter and for the new ANC NEC to deal with the fate of the League.

Immediately after the Mangaung conference, Lamola began the mission to save himself and the League. At the end of January, following a meeting of its NEC, the ANCYL said: “The NEC welcomed the meeting with the officials of the ANC and resolved to subject itself to the guidance of the ANC. The NEC committed itself to strengthening the organisation and undergoing a thorough review of the areas of concern raised by the national conference and the officials of the ANC.”

Mabe’s suspension was also overturned as the League acknowledged “no proper process was followed in the removal of Comrade Pule and resolved therefore to reinstate him to his position unconditionally”.

The League has been timid and almost invisible since then. There has been talk that a ANCYL national general council would be convened, possibly in July, to fill the vacancies in the League left by Malema’s expulsion and the suspension of general secretary Sindiso Magaqa. After Lamola’s capitulation and new allegiance to Zuma, there was not much jockeying for the League presidency, as it was expected that he would retain the leadership until the next elective conference.

It therefore came as a surprise to many within the tripartite alliance when news emerged on Sunday afternoon that the ANCYL NEC had been disbanded, along with the PEC of Limpopo. It is unprecedented that the ANC leadership disbands the leadership of an entire province and League simultaneously. However, the move against the League was particularly stunning, as the sting had already been completely removed from the ANCYL. As recently as Friday, Lamola said in an interview with the Sowetan that the League would toe Zuma’s line.

“The issue is about how we communicate. We are breaking away from that anarchy. The league has to operate within its mother body, we will continue to be militant but insults are [a] different [story] and are bad for the organisation,” Lamola told the paper.

With regard to discussions on the League’s future being discussed at the ANC NEC, Lamola said: “We will respect any decision. No one will fight any decision.” At the time he probably did not expect the decision to be what it turned out to be.

The outcome of the NEC is yet to be officially announced, as well as the route towards electing a new leadership for the League. It is believed that a transitional task team will be appointed to run the League in the interim until an elective conference is convened.

In Limpopo, now that the PEC has been disbanded as expected, it remains to be seen how long before the provincial chairman Cassel Mathale is removed as premier. Mathale is in double jeopardy, both for his lead role in wanting Zuma removed at Mangaung as well as his close relationship to Malema. It was expected from the beginning of the year that Zuma would announce a Cabinet reshuffle and appointment of new premiers, including Mathale’s replacement.

Five departments in Mathale’s government have been under national administration, following a Section 100(b) constitutional intervention, since December 2011. Provincial leaders say they expect that the intervention will be lifted once a new premier, from the faction loyal to Zuma, is appointed. However, a range of people in this faction are jockeying for the position of premier, and this has already caused infighting and splinter factions within the pro-Zuma camp in Limpopo.

“This might cause re-alignment and old enemies becoming new friends,” said one insider. Besides having the powers to reshuffle the provincial Cabinet, whoever is appointed premier would also want to be the provincial chairman of the ANC when an elective conference is convened, meaning that the position would hold enormous sway, he said.

Zuma therefore has to consider this carefully when he appoints the new Limpopo premier, as there is a danger of his own faction fragmenting in the province if there is opposition to the candidate. He might therefore look to the provincial task team, to be appointed to run the province until an elective conference is convened, to recommend a candidate for premier.

The team is likely to be headed by party veterans, with MP and former Umkhonto we Sizwe cadre Nelson Diale expected to be the convener. Others in the team will run governance, political education, elections and organisational renewal.

While the timeframes for the team have yet to be stipulated, they could run the province until after next year’s national and provincial elections. Party insiders say that with the ANC’s election programme due to be launched around August this year, there might not be sufficient time for Limpopo to convene an elective conference. Four of Limpopo’s five regions are also due for regional conferences, which will also be monitored by the task team.

While the post-Mangaung list of casualties grows, the purge of the ANCYL and Limpopo leadership is also the final cleansing of all traces of Malema in the ANC. The ANCYL and Limpopo ANC were his bastions and though many of his friends and allies have distanced themselves from him, the guillotining of the structures that hoisted him to power serve as a warning to all those who might still harbour ambitions of crossing swords with Zuma. Lamola, Mathale and their respective executives should, however, consider disbandment as getting off lightly. Malema, who is not only bankrupt, also faces the prospect of going to jail on charges of corruption, a fate that Lamola & co. are likely to avoid from this vantage point.

And while the ANCYL and Limpopo ANC may have succumbed to the Ides of March, as described in Julius Caesar, it is perhaps Hamlet with its treachery, revenge and moral corruption that best describes the internal affairs of the organisation at present.

One thing does look more and more obvious, though: the ANC, and South Africa with it, might well be living a Shakespearian drama of our own making, unable to change the course to the inevitable tragic ending. DM