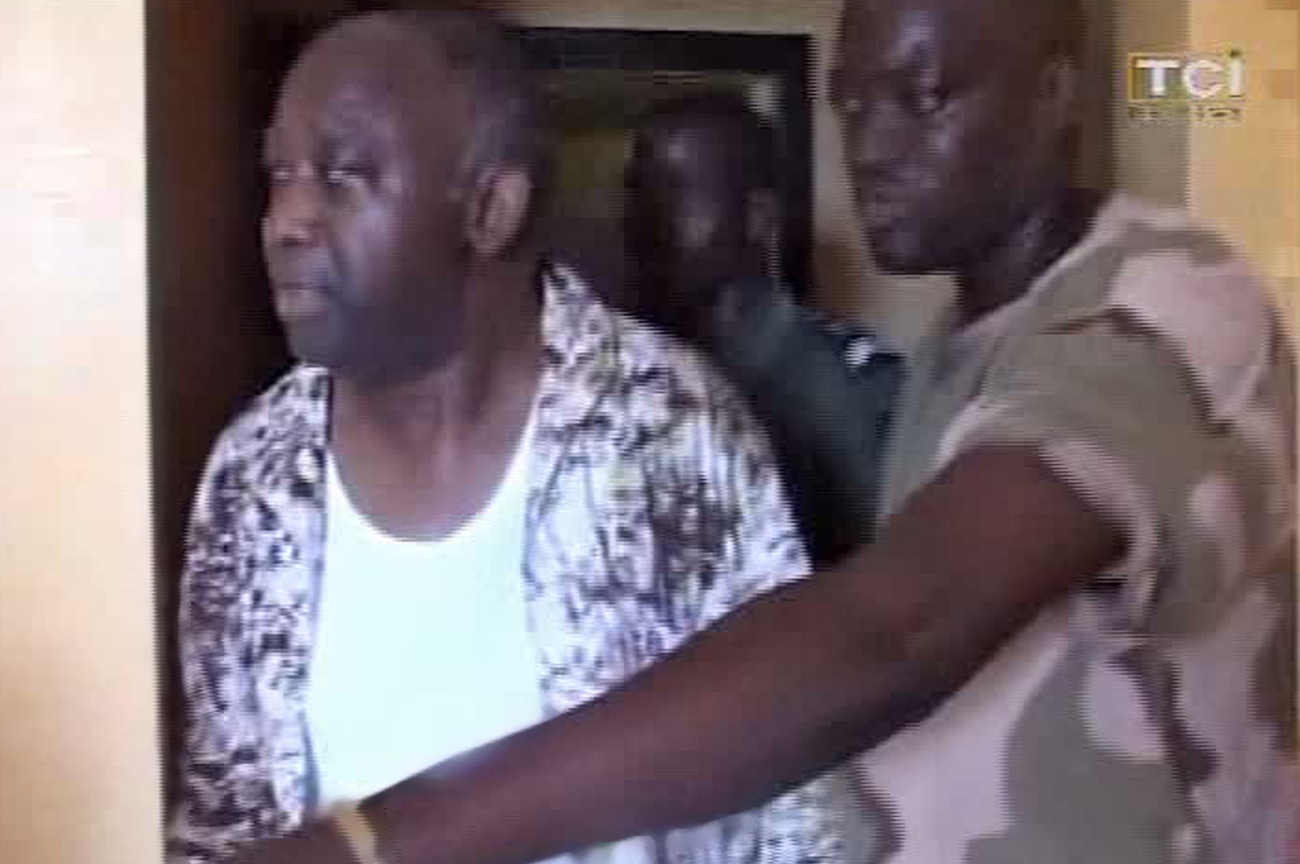 It took all of 134 days for self-declared president Laurent Gbagbo to finally vacate the Côte d’Ivoire presidential palace, after armed soldiers entered his bunker and captured him. Now in the hands of pro-Ouattara forces, he could face the International Criminal Court. By SIPHO HLONGWANE.

It was not clear who actually went down into the bunker under the presidential palace and captured Gbabgo. Reuters and Bloomberg initially said it was French special forces, but France24 said it was pro-Ouattara fighters who did the capturing. An advisor to Ouattara’s government told Bloomberg Gbagbo was being taken to the Golf Hotel in Abidjan where Ouattara’s government has been based since November last year. Apollinaire Yapi told Bloomberg, “[Gbagbo] has been handed to the Republican Forces. He is here at the Golf Hotel. He arrived by road and he is with several members of his family.”

Gbagbo may be taken out the city entirely, according to France24. One of our correspondents reports Gbagbo could possibly be taken to Bouaké, the French news network said. “Our correspondent also says at the UN there is talk of the necessity of protecting Gbagbo ‘against his own troops’, perhaps due to the fact that Gbagbo reportedly surrendered.”

While the exact manner of Ggabgo’s capture is neither here nor there, the important issue is Gbagbo is finally out – and he was not killed in the process. His army is now largely non-existent and Alassane Ouattara, the rightful president of Côte d’Ivoire can start the process of reconciliation and rebuilding.

The catalyst for the siege on the presidential palace seems to have been an attack on the Golf Hotel, Ouattara’s headquarters in Abidjan on Saturday by the pro-Gbagbo defence and security forces. The hotel came under small arms fire and mortar attacks, prompting UN and French troops to retaliate. The attack came after UN and French gunships had attacked Gbagbo’s military strongholds within the city on the authority of the UN heavy weapons ban on Gbabgo’s army. The attack appeared to have pounded Gbagbo into submission, with Ouattara’s prime minister Guillaume Soro declaring Abidjan would fall within hours. However, as soon as the UN and French helicopters stopped firing, Gbagbo’s army regrouped and launched Saturday’s attack.

Ouattara will have to step very carefully in the next few days in Côte d’Ivoire. Gbagbo’s army may be defeated, but they’re still heavily armed and the possibility of the Forces Républicaines de Côte d’Ivoire possibly committing war crimes against Gbagbo’s forces remain high. Ouattara will want to ensure his fight remains as clean as possible.

Foreign Policy’s Elizabeth Dickinson said, “There’s been a tendency, an understandable one, to single out Gbagbo for the atrocities his troops have committed. As the obstinate one in this political crisis, it’s Gbagbo who is under sanction by the West and who the African Union is calling upon to step down. It’s Gbagbo whose forces fired upon and killed protesters, vividly captured on YouTube. It’s Gbagbo’s men who have refused to let the UN peacekeepers patrol Abidjan. It’s Gbagbo who gave weapons to civilians in Abidjan and asked them to defend him. And so naturally, it’s Gbagbo who most people expect to end up in the International Criminal Court, paying for his crimes. That’s what Ouattara’s troops are banking on; they have been ordered to guard his ‘physical integrity’ should he be caught for precisely that reason.”

The pro-Ouattara forces are already facing allegations of war crimes, something that will make the rebuilding process a painful one. Reuters said, “Human Rights Watch said on Saturday that forces loyal to Ouattara had killed hundreds of civilians, raped over 20 women and girls perceived as belonging to the Gbagbo camp and burnt at least 10 villages in western Côte d’Ivoire.” The FRCI denied being involved in the attack.

Ouattara’s immediate task is bringing back a semblance of normality to Abidjan by taking the roaming gangs of armed militias off the streets and allowing civilians to access food, water and health services. Not the easiest of tasks, to put it very mildly. DM

Photo: Ivory Coast’s incumbent leader Laurent Gbagbo is seen in this video grab from Ivory Coast Television after he was arrested by forces loyal to his rival presidential claimant Alassane Ouattara, in Abidjan April 11, 2011. REUTERS.