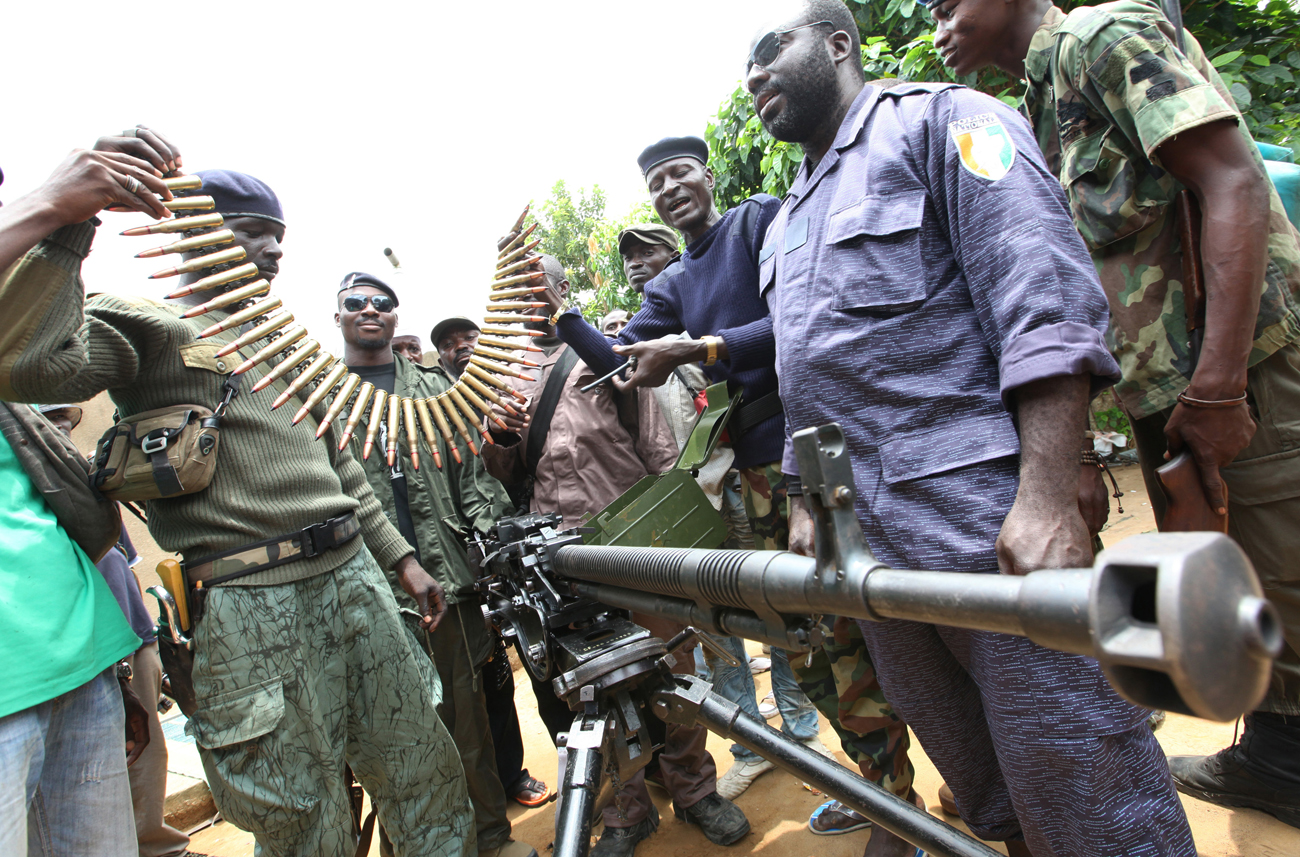 After waiting four months for Laurent Gbagbo to step down, armed forces aligned to president-elect Alassane Ouattara have decided they have waited long enough and are marching from the north of Côte d'Ivoire to Abidjan. Coincidentally, the Gbagbo camp would now like to be friends with African Union again. By SIPHO HLONGWANE.

Throughout the Côte d’Ivoire post-election crisis, Laurent Gbagbo had one slim lifeline available to him: Alassane Ouattara promised him a peaceful resolution and a government of national unity if Gbagbo acceded to the wishes of the people of Côte d’Ivoire. Ouattara made this proposal to the five-president AU panel sent to the country to mediate the crisis, and they accepted it. Gbagbo rejected the proposal and continued to hold on to power – albeit with increasing shakiness

The Ouattara camp has had enough now. According to AFP, the “peaceful resolution” is now off the table. The army aligned to Ouattara is now moving towards Abidjan to deliver in person the invitation to Gbagbo to step down.

AFP said of the push from the north of the country: “Weary with previous failed diplomatic efforts, Ouattara’s Republican Forces army on Monday launched a massive push south from a traditional ceasefire line splitting the country in two since 2002, seizing another four strategic towns on Tuesday. They were now closer than ever to the economic capital, Abijdan, the heart of Gbagbo’s power.”

The bond markets are reportedly reacting positively to the news. “Ivory Coast’s defaulted dollar-denominated bonds rose to their highest in seven weeks as rebels said they had seized four towns, adding to speculation of an end to a political stalemate from disputed 28 Nov. elections,” Bloomberg reported.

The Forces Républicaines de Côte d’Ivoire were a major rebel force in the 2002 civil war, aligning themselves to Ouattara, who faced aggressive opposition in his presidency bid in 2000, a major factor leading up to the 2002 war. Ouattara’s father is from Burkina Faso, and on this basis politicians from the south of Côte d’Ivoire tried to bar him from running for president under the banner of Ivoirité (a form of xenophobia against the mainly Muslim population from the north and west of Côte d’Ivoire). At the end of the civil war in 2005, a ceasefire line was drawn across the country, with the Republican forces controlling the north. Photo: An anti-Gbagbo protester holds a portrait of presidential claimant Alassane Ouattara during a demonstration in Abobo March 8, 2011. REUTERS/Luc Gnago.

Having already seized the towns of Duékoué and Daloa, previously controlled by Gbagbo’s army, the Republican Forces are now poised to seize Yamoussoukro, the political capital of Côte d’Ivoire. The Gbagbo army defending the city is digging in, according to The New York Times, and this may be the major battle between the two opposing forces yet. Should Yamoussoukro fall, analysts expect the northern army to capture the lucrative cocoa fields in the west, before marching on Abidjan.

In response to the Forces Républicaines thrust, Gbagbo is now apparently willing to talk to the AU and the Ouattara camp again. AFP reported Gbagbo’s spokesman Ahoua Don Mello said, “We call for an immediate ceasefire and the opening of talks under the mediation of the African Union high representative. Failing which, we will use our legitimate right of defence.

“We received a letter from the AU inviting us to negotiations from the 4 to 6 April in Addis Ababa. We haven’t replied yet, but there is no reason to refuse an occasion for dialogue,” Mello said.

That may also be unacceptable to Ouattara, who has rejected the AU-nominated mediator from Cape Verde, Jose Brito, a friend of Gbagbo. There is also the fact that Gbagbo is running out of money and apparently losing control of the army defending him in Abidjan. The UN peacekeeping mission in Côte d’Ivoire is reporting increasing attacks on its personnel. Defection is rife, meaning Gbagbo has to rely on the volatile Young Patriots to fill gaps, an unnamed diplomat told NYT.

The question of what Gbagbo will now do is largely out of his hand. He is holed up in Abidjan’s presidential palace and his army is pretty much doing whatever the hell it wants. Al Jazeera reports that “doing whatever it wants” means committing atrocities against pro-Ouattara residents in Abidjan. Unless Gbagbo gives Ouattara reason to believe he can offer him something substantial at the AU-mediated talks, even that might be too late. The Forces Républicaines have probably decided they don’t trust Gbagbo anymore, and want him removed by force. DM

Main photo: Pro-Ouattara fighters from a group which calls itself the “invisible commandos” hold ammunition and weapons they say were taken from Ivorian government forces after fighting with them in Anyama on Friday, in northern Abidjan’s Abobo district March 26, 2011. Fighting in Ivory Coast’s main city is spreading and the death toll from a power struggle between incumbent leader Laurent Gbagbo and his rival Alassane Ouattara is mounting. REUTERS/Luc Gnago.